What Could the Matter Be? Contemporary Craft at UMOCA 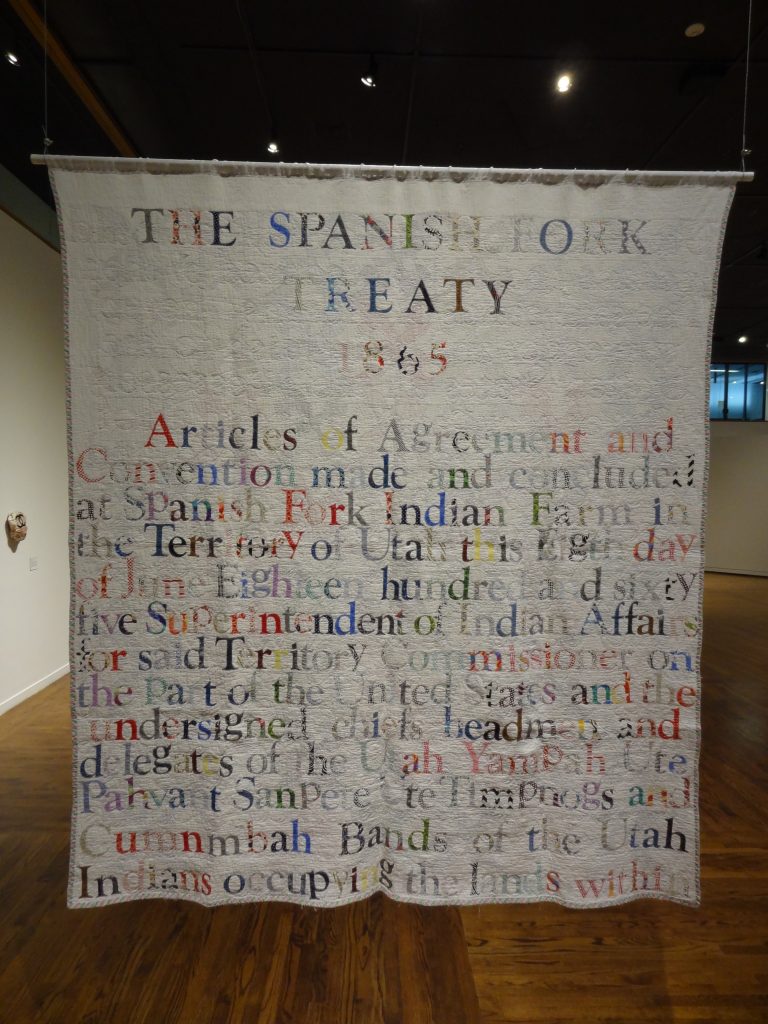 In order to enter Material Issues, the pieces of which can be seen from above, spread invitingly across the ground level gallery of the Utah Museum of Contemporary Art, you must cross the familiar steel bridge and descend the switchbacks of the staircase, first walking away, into the dark before approaching the vaulting, light-filled space. At this point, further progress is blocked by an expanse of word-bearing fabric hanging across the passage. Coming upon Gina Adams’ quilt, “Spanish Fork Treaty,” is like approaching an unwelcome fact that can be circumvented but will not go away. Such is its subject matter, as well. She connects two disparately familiar illusions: that a quilt makes a cold room warmer and that a treaty with powerful interloping forces could assure the prior inhabitants of the American Southwest they would be safe in their farms and families. Where the former is a useful illusion, she clearly sees the latter to be a tissue of lies.

By confronting its audience and requiring them to deal with it, this work declares itself and resets the values of the viewer and the viewed. Trauma, involuntary assimilation, remorse, and grief are additional cultural experiences it invokes, recalling an antique wrong in order to assert its own and the artist’s identities. Like certain phrases: I Am Somebody; Black Lives Matter; Feminism is the Radical Notion That Women Are Human Beings, these obdurate, indisputably real objects assert the identities of their fourteen makers.

This may sound like a truth of all art, but that is only a measure of the progress, however slow, of traditional crafts among the other arts. Historically, the purest art was the least material: it was the illusion of space opening into or projecting out of a wall, say, that elevated painting above utilitarian materials and techniques. It used to be seen as a limit on the aspirations of crafts (mere crafts) that they depended on materials such as wood, fabric, or clay, while the more noble arts aspired to a higher calling: transcending their base matter and achieving purity of form. Never mind that paintings were made of wood and fabric and sculptures carved or molded of earth. 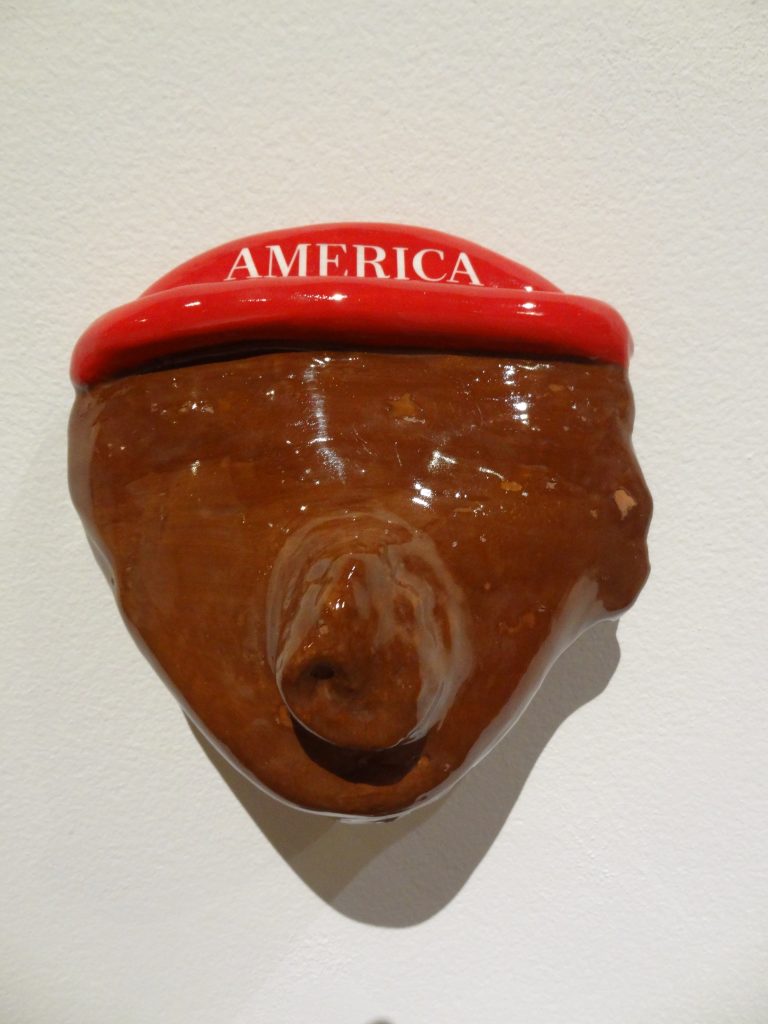 On either side of Adams’ quilt, and elsewhere in the gallery, ceramic sculptures by Horacio Rodriguez communicate the same implacable anger, but with more contemporary targets. His “Designer Head Fragments” are spirit warriors who assume the identities of those whose tombs are being looted to supply today’s collectibles market. On the other hand, “Brown Boys for 45” doesn’t so much target the 45th American president, his racist propounding of fictitious boundaries and divisions notwithstanding; rather, it challenges those victims of his tyranny who nonetheless support his misrule. That these putative weathered heads so strongly resemble so many red hat-wearing turds may designate the genius point in fine art: the place where viewers may choose to take their interpretations only as far as the card on the wall allows, or to follow their own intuitive, inner voices further. Connoisseurs tempted to congratulate themselves for their virtue as art consumers would do well to avoid “545,” another looted grave figure on a pedestal, to which is added a museum accession number (hence the title), and — bringing the museum walls into clearer proximity — a steel cage. To this initially charming, eventually disturbing tableau, Rodriguez has added a road sign that is instantly familiar to anyone who has driven near the border, and a graffitied epithet that sums up the long-standing attitude of so many former immigrants toward their current followers. 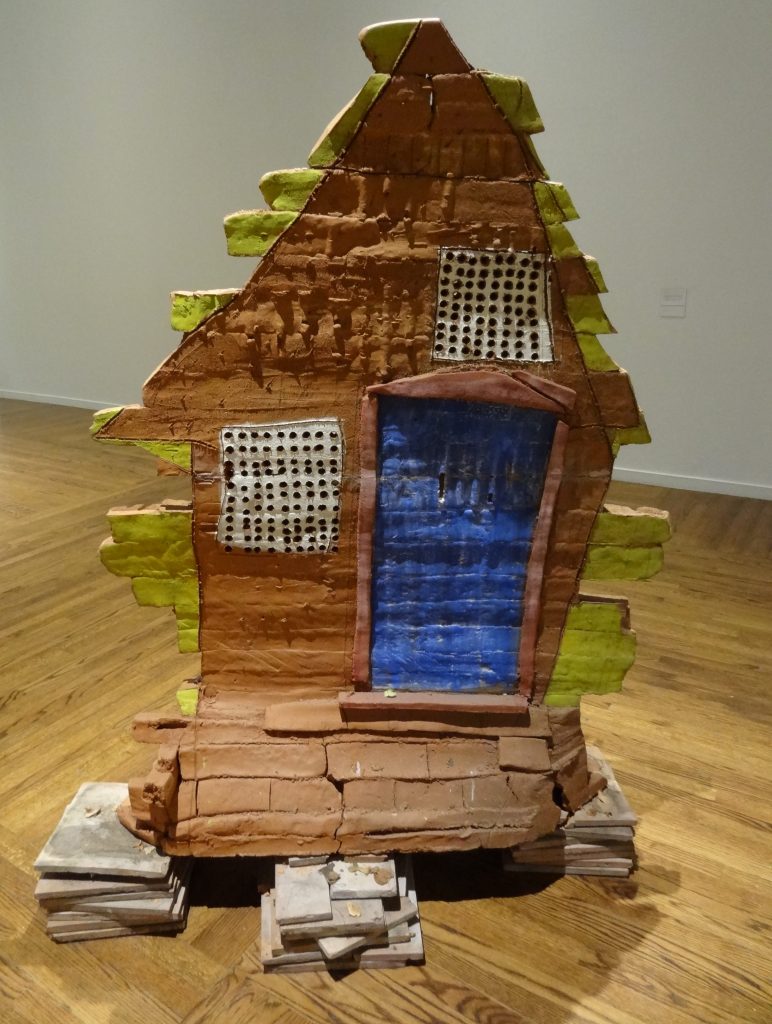 Although most of the work in Material Issues was crafted using clay or fabric, not everything speaks so bluntly, or in near monosyllables. While Brian Snapp’s depiction of “Home” as an expanded children’s drawing isn’t as reassuring as it initially appears, Amanda Smith’s four mixed-media-on-ceramic-relief panels offer all the complexity and ambiguity of a multi-volume, semi-autobiographical novel, like dark fairytales taking place in preternatural daylight, with settings that begin as suburban back yards, yet become as exotic as Persian miniatures. 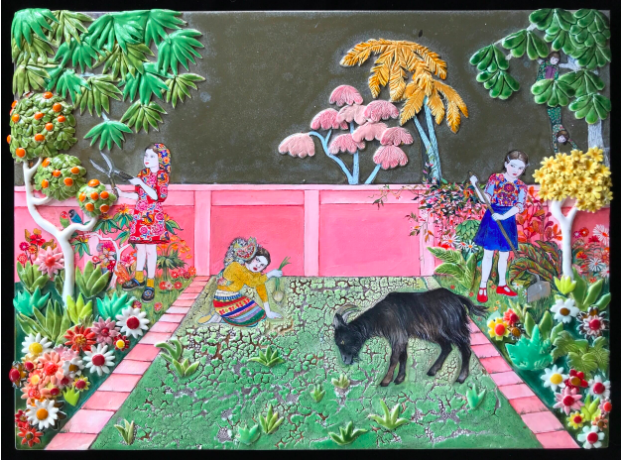 More than just an air of unreality characterizes the “Traces” of Ruben Olguin, which are actually three colorless and un-ornamented, foraged bowls, their elaborate decorations being projected “live” from above. This allows their imagery to come to life, sometimes rotating within a stationary bowl like water gently swirled, at other times cross-dissolving between tiny triangular patterns and stately, revolving galaxies. This may have begun in a desire to experiment with new media, to delight the adult mind with sophisticated electronic sorcery. If so, they nevertheless partake of the universal childhood anxiety that when what we love is lost from sight, it ceases to exist: turns off, shuts down, goes blank until witnessed again. Like the light in the refrigerator, or a beautiful object when no one appreciating it: how do we know it’s still there, still beautiful? Or might the artist be sharing a professional secret, demonstrating creativity as he experiences it? He turns the object in his hand, imagining how it might look, waiting for the right moment to stop dreaming and make it real. Every creation myth describes a god breathing spirit into mere stuff; might this not illustrate how the artist introduces living ideas into what had been only so much dead matter? 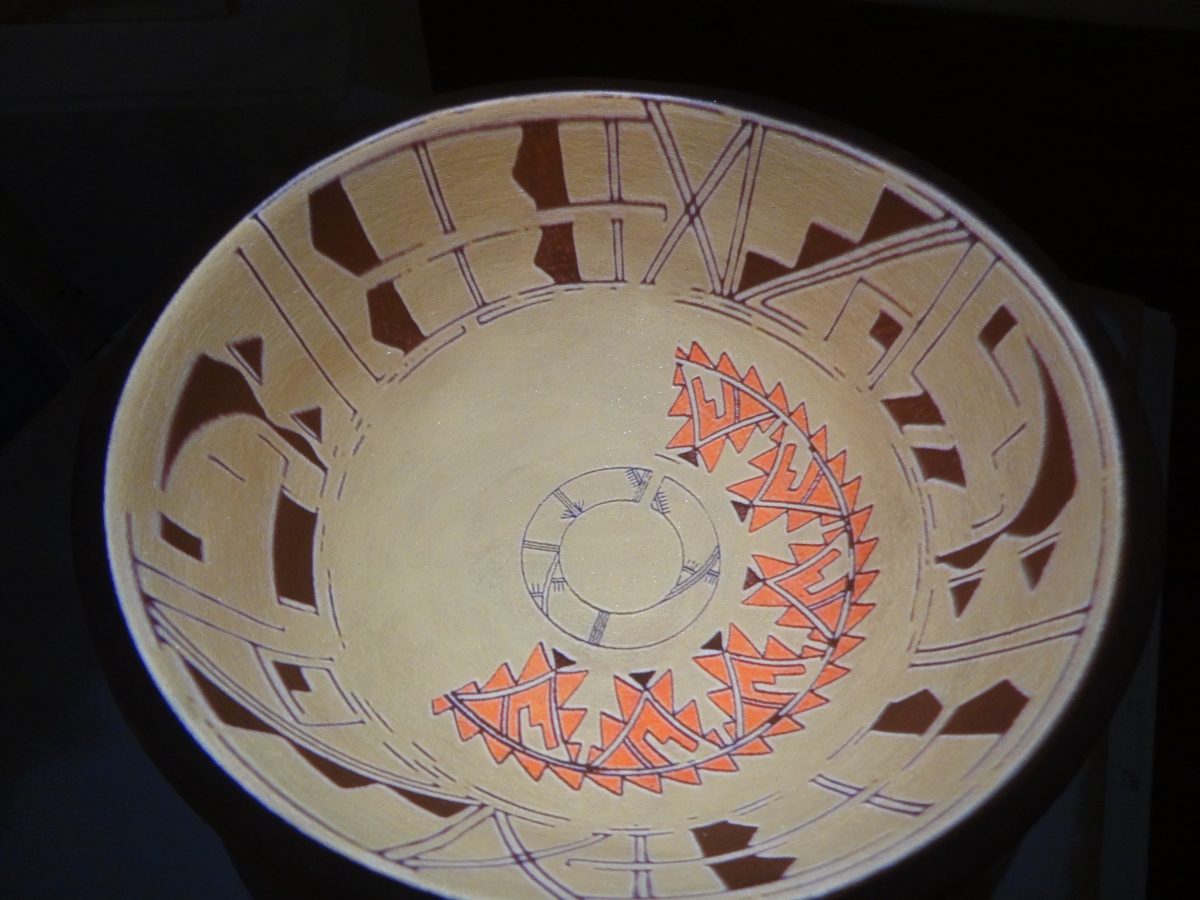 Author’s Note: Anyone thinking about attending an exhibition at UMOCA will want to know that the museum practices contact tracing. On entering, I was asked for a name (I gave them “Geoff”), a phone number, and a Zip code. Should a Covid incident connected to the museum occur, they will be able to identify the time of my visit and, if desirable, contact me accordingly. Other than my health care clinic, no other public space I frequent is taking this excellent, non-invasive measure to protect me and all its visitors. If every business in Utah were to do something similar, we would not now have the ninth-highest rate of infection among the United States. I encourage taking advantage of this opportunity to safely view fine art, supporting UMOCA financially, if possible, and ask that anyone who agrees with this splendid, non-invasive practice urge the various places they visit to consider doing the same.