What Am I Doing Here? at Southern Utah Museum of Art 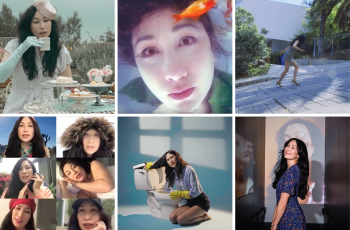 Southern Utah Museum of Art (SUMA) on the campus of the Southern Utah University (SUU) exhibits What Am I Doing Here?, a collection of 17 short films featuring Los Angeles-based Korean-American filmmaker and visual artist Jeanne Jo. The exhibition is on view through Saturday, September 24, 2022.

From an underwater “Rick Roll”, a windy tea party, or a seemingly never-ending start of a virtual meeting to a life-threatening moment at a vanity, a blur between laughter and crying, and a perilous walk up a hill in high heels, the films range in subject matter and visual style. Using humor as a point of entry, each work highlights Jo’s ongoing investigations into gender, power, and physical and emotional vulnerability.

Usually found behind the camera, Jo stars in each of the films through a collaboration with film directors to create individual works centered on specific performative actions, blurring the boundaries between performance art and narrative fiction.

“Creating a self-portrait with the help of others means relinquishing control over one’s image,” said Jo. “It means learning about yourself by seeing yourself through the eyes of others. Sometimes, I became the stand-in for the director’s body—for an emotion they had experienced and wanted to share. Other times, I had a pressing experience that I asked the director to use as a prompt for the film.”

More information about the exhibition including a SUMA Observations and Conversations podcast episode with Jo and a Q&A with Robert Bailey, associate professor of art history at University of Oklahoma can be found on SUMA’s website. Previews of the films are available upon request to admin@jeannejo.com.

Jo has an MFA from the Rhode Island School of Design and a PhD from the University of Southern California’s School of Cinematic Arts. She currently has a half-hour comedy show in development with her collaborator Keenan Coogler, is producing a documentary on Redwood tree activists, and is attached to direct two feature films.

About Southern Utah Museum of Art

Southern Utah Museum of Art, on the campus of Southern Utah University, features the artwork of regional artists known for their landscapes, faculty and student artists from the SUU Department of Art & Design, as well as emerging and distinguished artists from around the country. Strengths of the nearly 2,000-object permanent collection include the body of work by Jimmie Jones that exemplifies his notable career in the regions, as well as a robust collection of prints featuring well-known artists such as Pierre-Auguste Renoir, Salvador Dalí, Katsushika Hokusai, Thomas Hart Benton, and others. Part of the Beverley Taylor Sorenson Center for the Arts, which also includes the Utah Shakespeare Festival, SUMA is free and open to the public.