Warhol, Murakami and the Cult of Cool 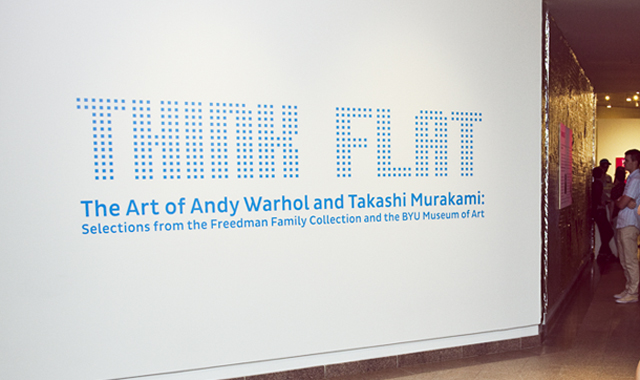 In the fall of 1965, the Institute for Contemporary Art in Philadelphia hosted a retrospective of Andy Warhol’s work. Warhol having captured the attention of both the art world and popular culture, the exhibition drew a mob of over 4,000 people who clamored so tightly into the gallery that Sam Green, the museum’s director, felt it best to remove all of Warhol’s work from the walls. “It was,” according to Warhol, “fabulous! An art exhibition with no art!” But certainly, this was not entirely true. The artist himself was there, as was Edie Segwick, as the main attraction.

Flash forward to this year’s fall opening of the Freedman Family collection, Think Flat: The Art of Andy Warhol & Takashi Murakami, at the Brigham Young University Museum of Art. As with ICA Philly forty-seven years ago, the BYUMOA Warhol exhibition opened with droves of people, capping out with an impressive 2,675 in attendance. Admirers crowded the basement galleries to celebrate Warhol, his iconic pop style and his contemporary Japanese counterpart, Takashi Murakami.

All of this attention begs critical analysis. In the recent late August edition of The New Republic, Jed Perl calls Warhol “wildly overrated,” asserting that “there is something comedic about [his] lofty reputation with art historians giving him the sort of attention once reserved for Poussin.” The article specifically focused on LA MOCA’s The Painting Factory: Abstraction after Warhol exhibition, which recently closed. Perl’s main critique is that Warhol’s work has little influence on contemporary painting and felt that his contribution was unoriginal, asserting that others were investigating similar ideas “long before Warhol got to work with his silk screens.”

Yet where MOCA fails for Perl, BYUMOA succeeds.Think Flat puts Murakami’s Japanese anime-obsessed subculture in context with Warhol’s persistent superficiality, continual repeating patterns and his obsession with the cult of cool. Its walls lined with foil, a la Warhol’s factory, the exhibition is hung in conversational pairings: Warhol’s ten Marilyns face Murakami’s twelve prints of Mr. DOB, his Mickey Mouse-like anime figure, all titled, “And Then, And Then, And Then, And Then, And Then” (1996-2008); both artists paired with pop musicians to create album covers, such as the Rolling Stones, for Warhol and Kanye West, for Murakami, and BYU intermixes these various covers, along with their soundtracks, in the entry; and Murakami’s Louis Vuitton canvases hang close to Campbell soup cans.

What emerges are pieces, both by Murakami and by Warhol, that are empty, empty, empty of overt feeling and that blatantly reject meaning beyond consumerism, products and fame. They are flat. Flat for the sake of flatness and cool to the point of iciness. Warhol’s subject matter manifests an American obsession with stardom and Murakami consistently depicts Japanese cute, where childish fantasy and anime figurines are embraced with, what curator Jeff Lambson calls, “the same zeal as real celebrities.”

As for Perl’s critique of Warhol’s so-called “over-rated” place within the Pantheon of Artists, it seems an unfounded criticism. Warhol appropriates campy images of the Queen and Coca-cola, both of which he imbues, whether seemingly mundane or not, with celebrity status indifferently blurring the boundary between high and low art. This may seem, to some, an absurd investigation because Warhol’s critique of the highbrow art world has clearly been canonized. However, both Murakami and Warhol have built their careers through this dissolution and hierarchical disruption, and the art world has a long precedence of incorporating artists that critique it.

According to Murakami, “the gap between high and low cultures is now almost gone. In a literal sense, a ‘superflat’ culture has emerged.” This superflat culture is all around us, much more so now than in Warhol’s time and perhaps that is why his work still carries with it such excessive currency. Learning and culture, in the era of Wikipedia, is rhizomatic. YouTube, blogs, reality TV shows, social media, and twitter, are our new cultural landscape, where the everyday man and woman often receive their 15 minutes of fame. This Warholian flattening of visual hierarchy is re-enforced in the gallery where photo-booth pictures of the opening’s attendees hang alongside pricy artwork. Art patron becomes art product and her presence garners the lofty and coveted position of the museum wall.

Product is the keyword here. In the case of Murakami, his super-cute flower motif, seen in Killer Pink (2003), repeats not only on copyrighted stamped prints but also on campy gift shop items such as pillows, buttons, hand towels, stickers, key chains, and more. Produced in a factory assembly-line studio, called Kaikai Kiki, Co., Murakami imagines art as a consumer product, as a consumable product.

Murakami is selling us something, Warhol is selling us something, and what they are selling is the cult of cool. All of which brings us back to the jam-packed opening at BYUMOA. It is perhaps this central element in Warhol and Murakami that audiences and art world elite alike really buy into when they flock to the museum, visually consuming the art products they see.

Think Flat: The Art of Andy Warhol and Takashi Murakami is at the Brigham Young University Museum of Art through February 18, 2013.