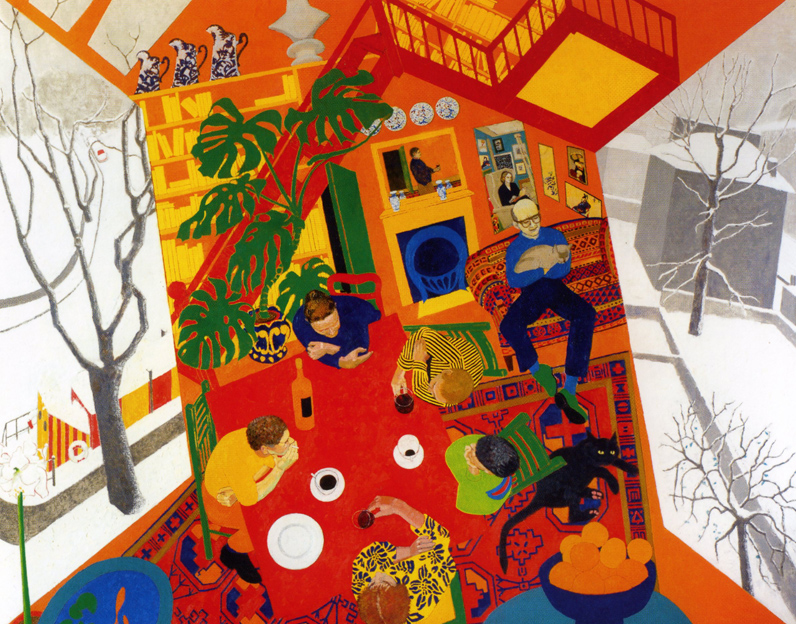 Portraits from the Mind: The Later Works of William Utermohlen 1995-2000
, at the Utah Museum of Fine Arts, is a haunting visual depiction of a talented artist’s descent into the hell of Alzheimer’s disease. The exhibit, selectively curated from galleries in Paris and Chicago, is on display through January 11, 2009 and should not be missed.

First diagnosed by German psychiatrist and neuropathologist Alois Alzheimer in 1906, the eponymous condition is a devastating disease that affects millions of people worldwide. The personality and behavioral changes in someone with Alzheimer’s are disturbingly well known to their families and caregivers, but rarely do we get a chance to view the progression of the disease through the eyes of a person experiencing its ravaging effects. 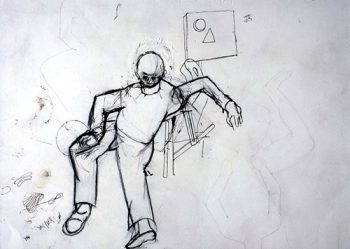 Utermohlen’s works are located in a small room on the ground floor of the museum, offering the viewer an intimate space in which to contemplate the images. Starting to the left and moving around the room clockwise, I was first struck by the insightfulness of two self portraits and the vivacity of a large painting entitled “Snow,” all of which were created prior to Utermohlen’s diagnosis. “Snow” 1991 is a riot of color with Matisse overtones and a skewed overhead perspective of five adults enjoying wine and coffee around a table. Interestingly, Utermohlen places himself outside the conversational circle, sitting on a couch cuddling his cat. Critics have speculated that this is one of the first indications Utermohlen subconsciously realized he was distancing himself from friends and family because something was wrong with him, but it is hard to know if this analysis is the result of 20/20 hindsight. 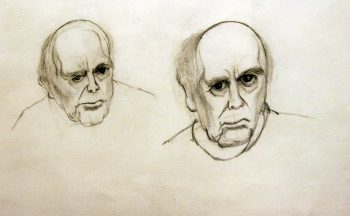 If the interpretation of “Snow” remains speculative, it is clearly evident that Utermohlen’s mental condition deteriorated quickly after 1995 — and, more distressingly, that he knew he was losing his faculties. As I moved around the room, I could see an erratic but steady erosion of technique and composition in addition to a portrayal of deep personal angst and disorientation.

In “Broken Figure” 1996, |1| Utermohlen renders himself in pencil as a contorted rag doll figure, reminiscent of the brainless Scarecrow’s attempts to stand up in the Wizard of Oz after being released from his pole. “Double Self-Portrait” 1996 |2| is an even more intense representation of his body’s betrayal. The artist focuses on his skull, the root of his disease, and the eyes staring back at the viewer are angry and piercing. Utermohlen has also drawn himself twice in this portrait as an old man with sagging cheeks and a heavy chin, though a photograph depicted in the exhibit catalog taken in 2003 shows him to be much more youthful. In poignant contrast, however, the later photograph reveals a pair of vacant eyes.

A further erosion of self is evidenced in two images created in 1996, “Mask (Black Marks)” and “Mask (Clown).” The former has only a white oval for a head, light-colored shapes with two black vertical lines for eyes, and red dots for a mouth. “Mask (Clown)” has a red gash for a mouth with heavy red paint dripping around the eyes and a head that is cut off at the top. Utermohlen’s wife, Patricia, believed that he was expressing his emotional anguish in the most direct possible manner in that “Mask (Black Marks)” is a primitive death’s head. 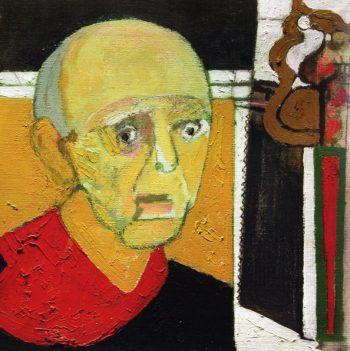 A particularly unsettling painting in the exhibit is “Self-Portrait (With Saw)” 1997. The image was created shortly after Utermohlen learned that the only definitive way to diagnose Alzheimer’s is through post mortem examination of the brain. His painting reveals a face that is gaunt, stark and stunned; if the head were to suddenly open its mouth and flail its hands around its face, it would resemble the ghostly figure in Edvard Munch’s “The Scream.”

The later self-portraits in the exhibit represent a man who is quickly losing his ability to function. “Erased Self-Portrait” 1999 is the last in which Utermohlen was able to use oil paints, and is aptly named. The image contains a half painted and half smeared oval shape with two shadowy circles high on the forehead for eyes; Utermohlen is literally self-effaced.

The penultimate image is “Head I” 2000 — a depiction in scribbled pencil of a primitive head, a large crack running through the skull, and two black, disproportioned cavities for eyes. In the final image, there is only a smeared shape of a head.

It was while contemplating the exhibit later that I had a small epiphany about the importance of eyes in Utermohlen’s self-portraits. Harkening back to my college days as a psychology major, I remember learning that infant brains are hard-wired to be interested in faces as the basis of social development, and that even a toddler’s drawing of the human face will include eyes (usually circles placed high on the forehead), though the image may be missing a nose or mouth. In a visual reversal of human social awareness, I therefore found it very poignant that Utermohlen’s self-portraits contained eyes almost until the very end, even though they diminished to misplaced dots. The fact that his final self-portrait had no eyes at all is a heartbreaking representation of a man who could no longer see himself due to the damage of Alzheimer’s. 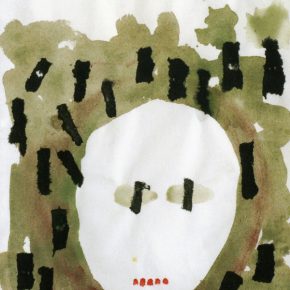 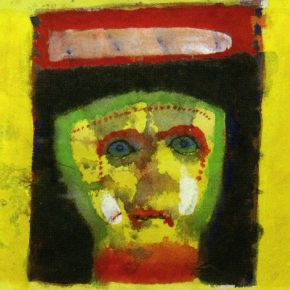 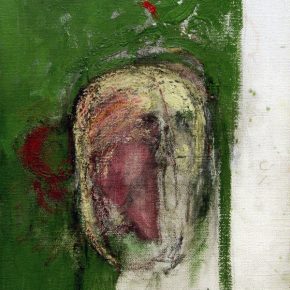 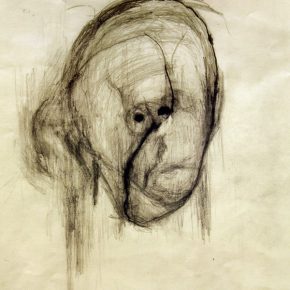 William Utermohlen died in 2007, seven years after his last self-portrait. He was 74 years old.