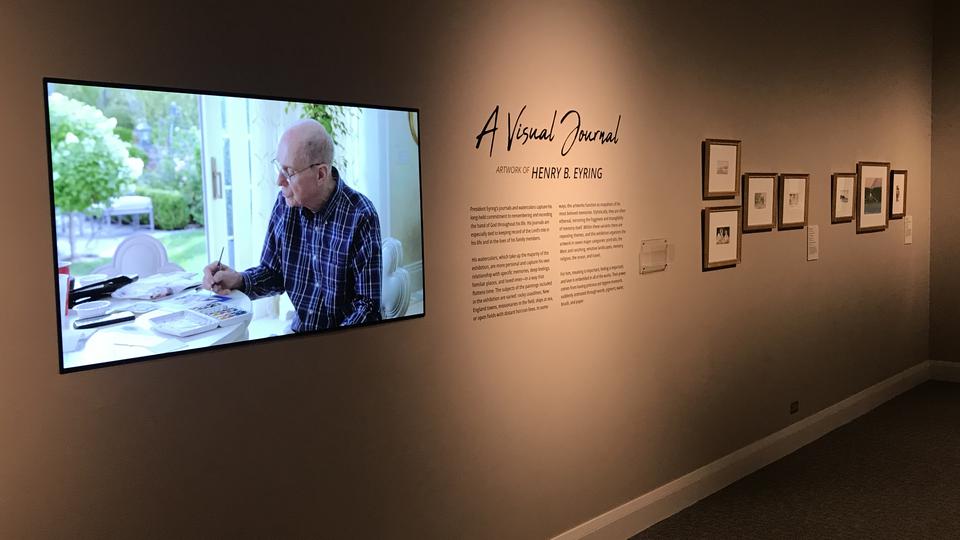 None of these works is exceptional. But they are not bad. On Friday, Nov. 9, the Church History Museum opened an exhibit of works by Henry B. Eyring, an apostle of The Church of Jesus Christ of Latter-day Saints who has been serving in the governing body of its First Presidency since 2008. A Visual Journal: Artwork of Henry B. Eyring features scores of watercolors, from five decades of painting, depicting scenes from all over the world.

Eyring, the son of a famous chemist, began in the sciences but finished in business administration, earning a Ph.D. at Harvard before accepting a teaching position at Stanford University. He taught there for nearly a decade before becoming president of LDS Church-owned Ricks College (now BYU-Idaho). In 1985, he was made a general authority of the LDS Church by his uncle, Spencer W. Kimball, and has served in positions of church leadership ever since. Though, like many, he would draw and doodle as a child, and took an art class in junior high school, he has no formal art training. He first started painting while on vacation with his family in Hawaii in 1971 when he hurt his back and needed to find something to occupy his time while his boys were surfing. After these first attempts, he received some encouragement and help from Dick Bird, an art professor at Ricks College, and has been painting on a regular basis ever since. 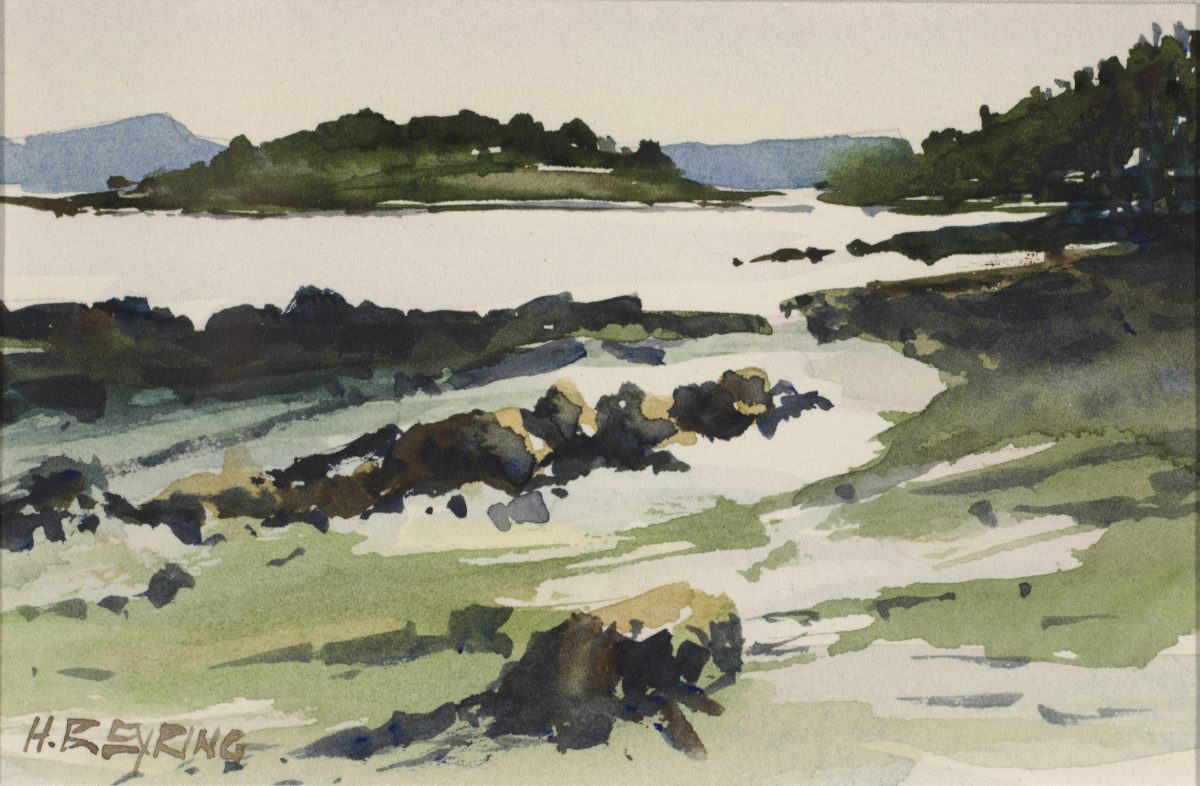 It’s good to be the king (or earl, or count — whatever we might decide the equivalent of a senior LDS apostle would be) because, let’s be honest, a local bishop or Relief Society president who had created these works, not to mention the average layperson, would not be granted a museum show of this magnitude. An honorable mention at the local watercolor society show? Maybe. Children and grandchildren fighting over who gets what piece after the funeral? Definitely. But these works are given this type of exposure not because of what they are, but who he is.

Which is not to critique Eyring, who in interviews appears humble about his accomplishments, makes no claim to being a professional artist and is not trying to make money or establish a reputation. It’s common for us to be interested in the artistic work of famous people. George W. Bush’s portraits wouldn’t get a second glance if they were not made by a former president of the United States. Winston Churchill’s paintings are more accomplished than Bush’s, but the same principle applies. A Visual Journal was first organized at the Jacob Spori Art Gallery at BYU-Idaho, where it coincided with the installment of Eyring’s son as university president, and one suspects was as much a celebration of the father and son as of the works. 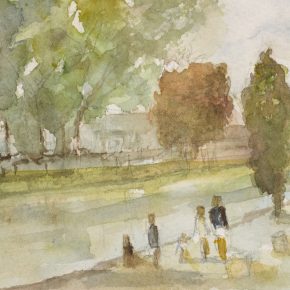 “Walking by the Seine” 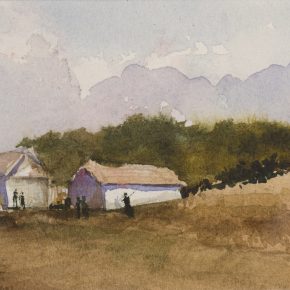 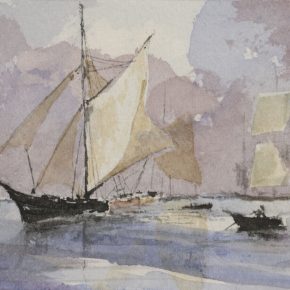 The exhibition, in fact, is structured as much around the art as a form of journaling and a spiritual endeavor as it is an aesthetic enterprise. Shortly before he took up painting, Eyring had committed himself to keeping a journal, making entries intended as spiritual messages for his children, and he began incorporating sketches and watercolors as part of the process. He now uses email for the messages to his children, but continues to paint as a means to capture experiences and evoke emotions. 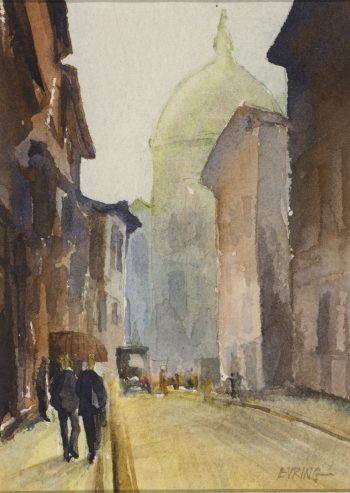 His watercolors are postcard scenes, both in subject — rocky coastlines, cottages in the Cotswolds, France’s Mount St. Michel — and in size — the reproductions you see on your computer screen or in the printed brochure are likely larger than the originals. Eyring says he has to have an emotional connection to what he paints. Most are not dated, but many of those that are come from the past couple of years, when his wife has been ill, and many works either feature her or have a connection to their life together. Other paintings are his interpretations of church history and scriptural scenes, some images are of the West, from his days at Ricks, while those featuring young men in dark suits in places like Japan, France or Bulgaria, come from his time as a traveling apostle.

Not all the foreign locales are from Eyring’s own trips, however. Eyring says his visual memory is not particularly acute, that he has to have a source to work from, and that he almost never paints outdoors. Images he comes across are frequently used as source material and he has learned his craft by copying or working from the works of others, indicated at times by an “after so and so” in the title. These may be his strongest pieces, but having painted more than 900 watercolors, he has learned some things along the way: most works demonstrate attentive drawing, strong compositions with a balance between large forms and sharp detail, and a good sense of color. He stumbles in only a few.

The single piece larger than a postcard, an approximately 18” x 14” landscape “after Al Rounds,” suggests he may be uncomfortable working on larger pieces. He may not have mastered his craft sufficiently to work at that scale, or he may be hesitant to devote the time it would take to complete larger works. He says he works quickly, doing other things while he waits for washes to dry. He even speaks of a sense of guilt for the time it takes away from his ecclesiastical work.

It may be a delusion, but many of us working in the arts feel that time spent in a craft, expressing ideas and emotions, can’t but help those who shoulder larger responsibilities. Medical schools seem to agree and a decade back began looking for students who had spent time in the humanities as well as the sciences. One wonders if the world wouldn’t be better off if business management and political science programs did something similar. Because the thought of world leaders taking time to paint or write poetry on the side is not a bad thing. And sure, warrants an exhibition or two. 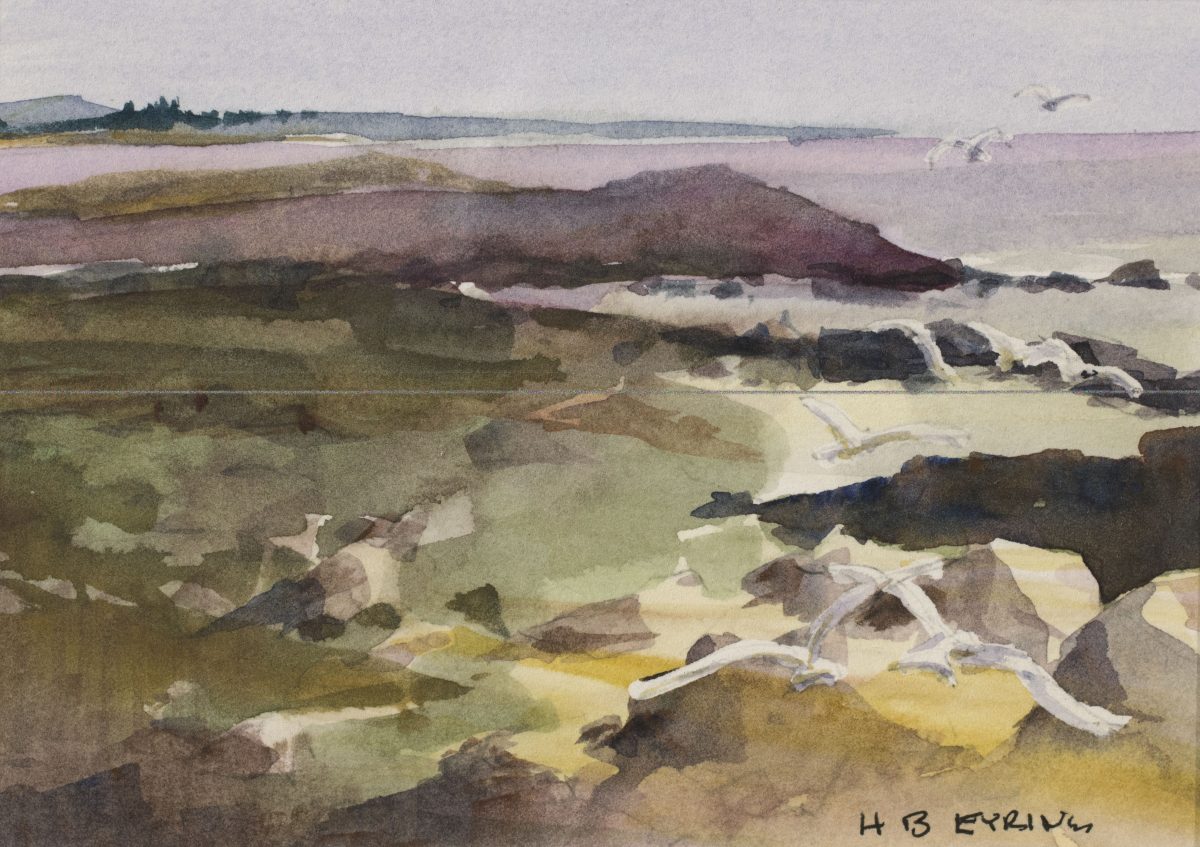 A Visual Journal: The Artwork of Henry B. Eyring, Church History Museum, through January 21, 2019.