Veera Kasicharernvat: The Way of the Mark 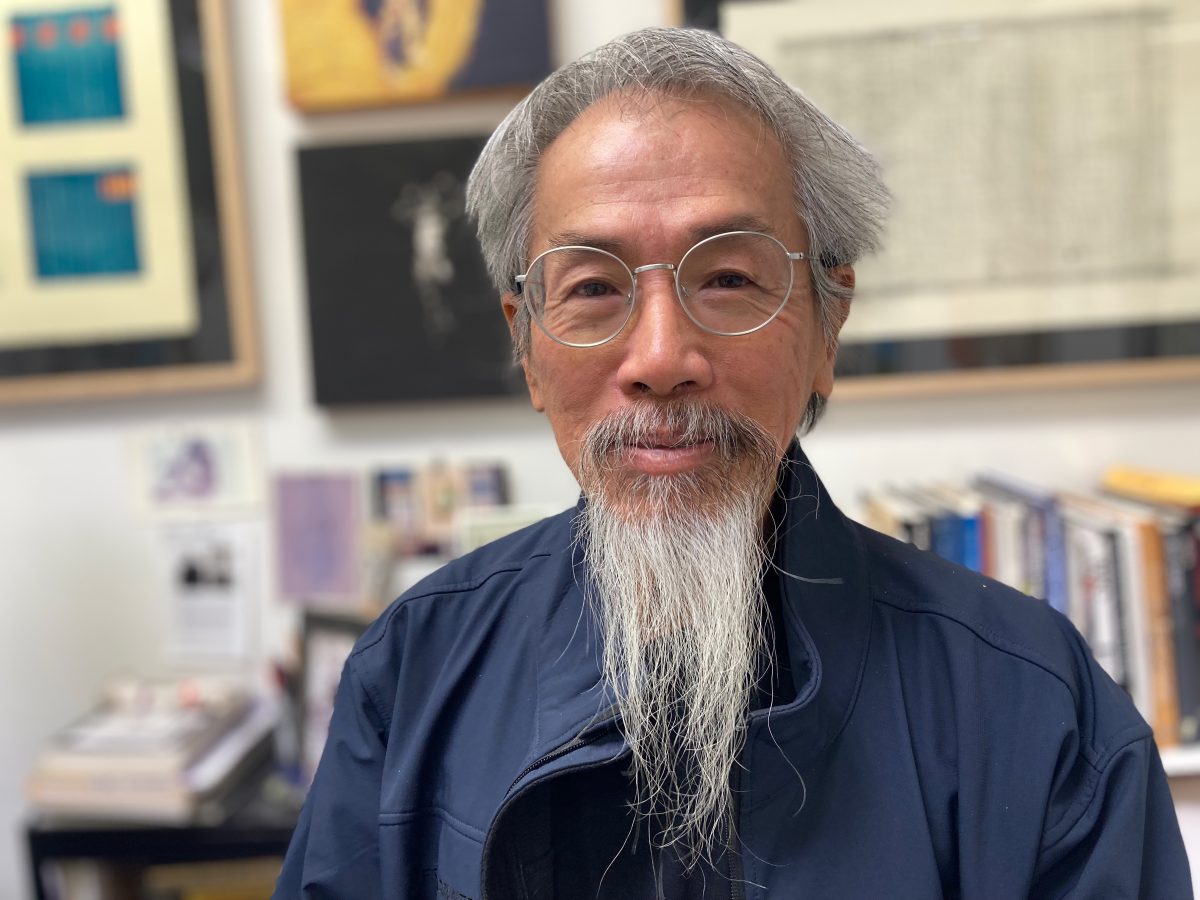 Veera Kasicharernvat stands tall, though not rigid. As he moves about his studio, weaving between press and table and bookshelves, his movements are supple, purposeful. Quick with a smile, his is a quiet, joyful presence. The energy he brings to this space, where he paints and prints and — most recently — collages, is influenced, no doubt, by his decades as a student and teacher of aikido and tai chi.

In 1969 Kasicharernvat immigrated to the U.S. from Thailand as a teenager. His family settled in San Diego, where he attended a year of high school before going to San Diego City College and San Diego State, where he studied computer science and economics. He discovered Utah while visiting an uncle who was completing a doctorate in economics at the University of Utah. “I thought of it as a small town, you know, with horse and buggy — I had seen Westerns. I was impressed: There were lots of trees, on the streets, and seeing the mountains.” He moved here in 1977, finished his degree at the U, and began working for the JC Penny computer center and then the Newspaper Agency Corporation. But Kasicharernvat, now retired, speaks little of this “professional” life — more interested, it is obvious, in his two vocations: the visual and martial arts.

Kasicharernvat began studying Judo with a Japanese master in 1967, while still in Bangkok. He achieved a brown belt before he was seduced by aikido, which he discovered in 1974 at the San Diego Sherriff’s aikikai. He learned the Yang style of tai chi from Benjamin Lo and Robert Smith, in California, beginning in 1982. Both practices are spoken of as “soft” martial arts — self-defense disciplines which emphasize conflict resolution and are practiced in a non-competitive format. Kasicharernvat says the specific techniques are secondary to his goal of developing a calm mind and healthy body. 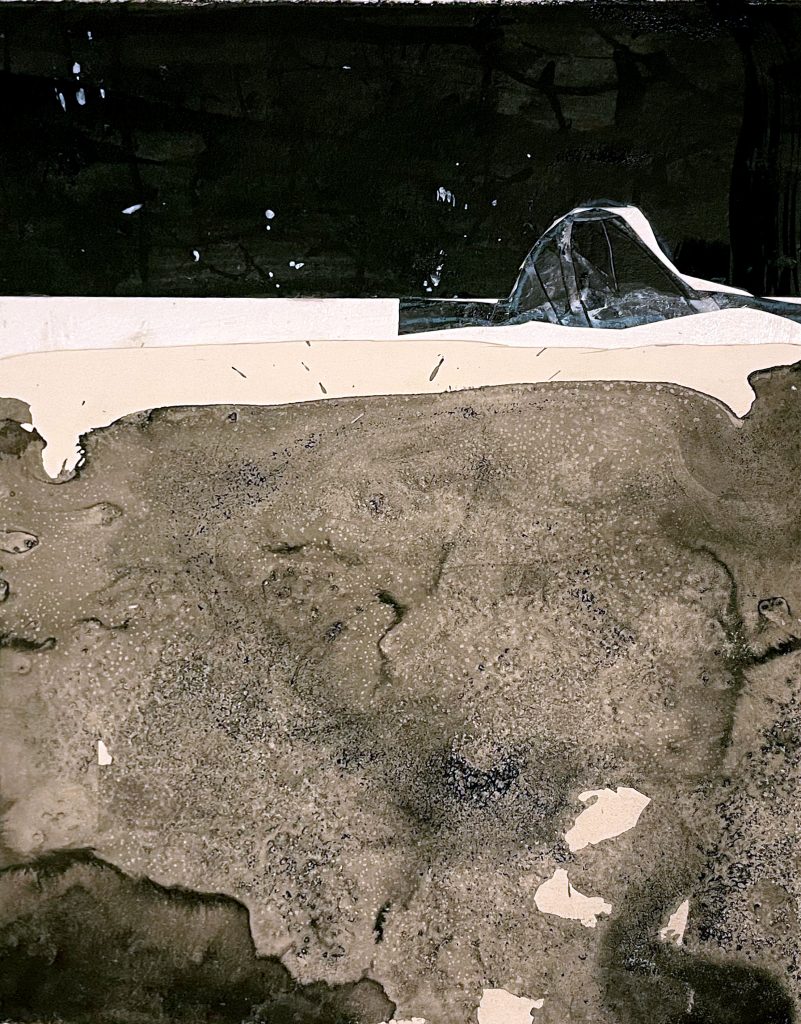 To listen to him talk about his practice of aikido — about being relaxed and open, about resilience and response, being connected but letting go in the moment — it’s hard not to imagine a similar discourse happening in his studio practice, hard not to read something analogous into the artwork he creates. His own comments won’t dissuade you: “I’m just thinking about mark making,” Kasicharernvat says about his non-objective work. “I’m investigating the energy, the chi. I try to harmonize the opposites, the ying and yang.”

He says he was always interested in art, and began taking ceramics classes at the Salt Lake Art Center with Lee Dillon in the early ‘80s. Because Dillon, also a printmaker, had studied with Bob Kleinschmidt, Kasicharernvat enrolled in the University of Utah professor’s continuing education classes; on campus he also continued work in ceramics, with Dorothy Bearnson, who suggested that, since Kasicharernvat was already spending so much time at the U, he should pursue a degree. 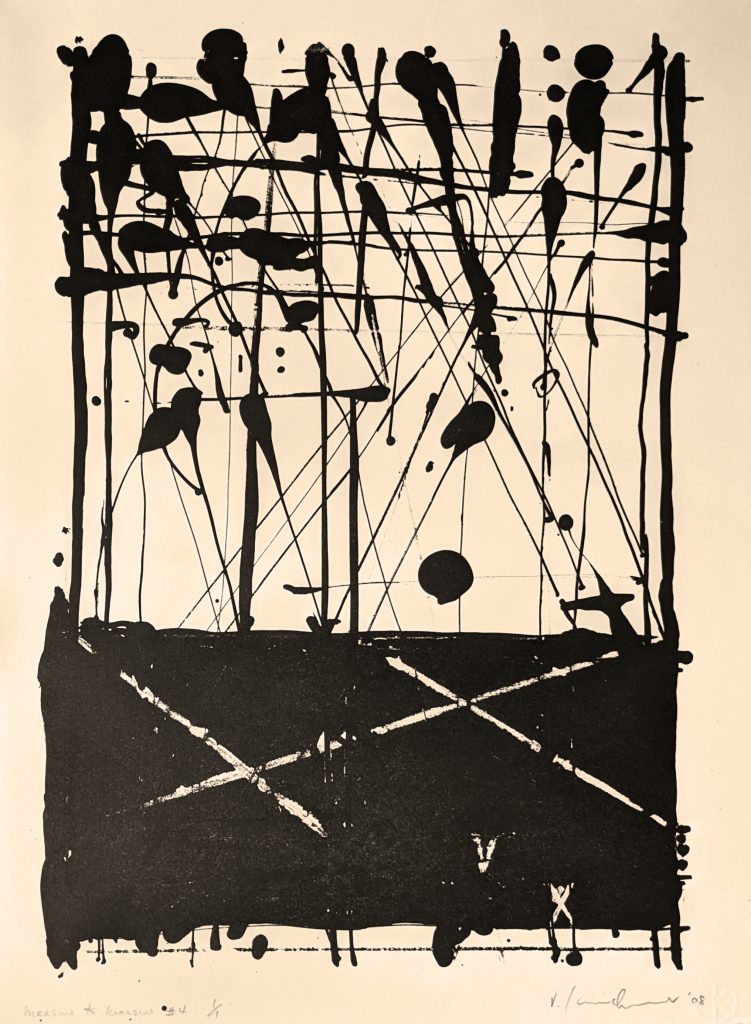 “I worried I didn’t know enough art history or art vocabulary,” says Kasicharernvat, who has a generally self-effacing manner. He had to start from the beginning with foundational classes, and some of his work did prove tricky, but he finished a BFA and then his MFA. Influenced, he suggests, by the preeminence in Western art of the human form, he experimented with the figure during this time, but with little satisfaction. Sam Wilson, one of the professors on his graduate committee, suggested he return to his beginnings.

Abstraction, or more accurately, the non-objective, is where he has remained. The works allow him to embrace both chaos and order, to allow him to be in the moment and explore the energy of his process. Repetition and variance are two forces at play in much of his work. His marks are strong, but not aggressive. They may appear as fields of individual though related strokes, or mass as accretions of hatch marks into one large form. They can be absorbing pieces, though they may not please everyone. “People say you have to have content. The best for me is to have the viewer answer for themselves [the content],” he says. “I just put it out there, the spirit, and see if the viewer connects with the energy.” 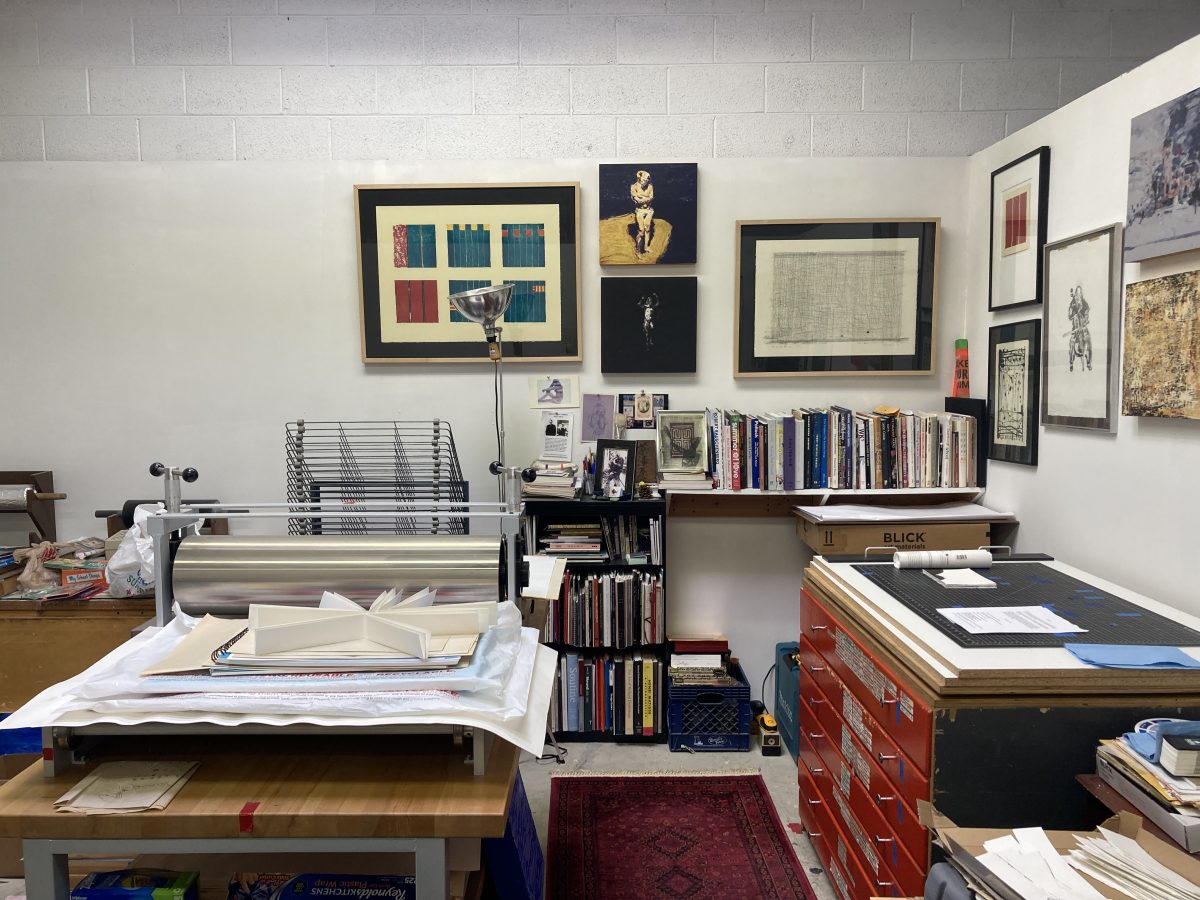 Printmaking has been his principal medium — mostly in black and white, though he has also incorporated restrained color. Even in a form that emphasizes multiples, he manages to create a sense of play and freedom. “It’s planning and accident,” he says of the medium “Bob [Kleinschmidt] always talked about intuition with intellect. He said, ‘Your work is more intuitive but you bring the intellect [to the printmaking process].’”

In Kasicharernvat’s current exhibit at Salt Lake City’s Phillips Gallery there are only two prints — lithographs from around 2007. The rest of the show is composed of collages, a medium Kasicharernvat came to only recently. He was partly inspired by Conrad Marcarelli, the first generation abstract expressionist who made collage his principle medium. “If a painting didn’t work he would cut it up and make a collage,” Kasicharernvat notes with enthusiasm. 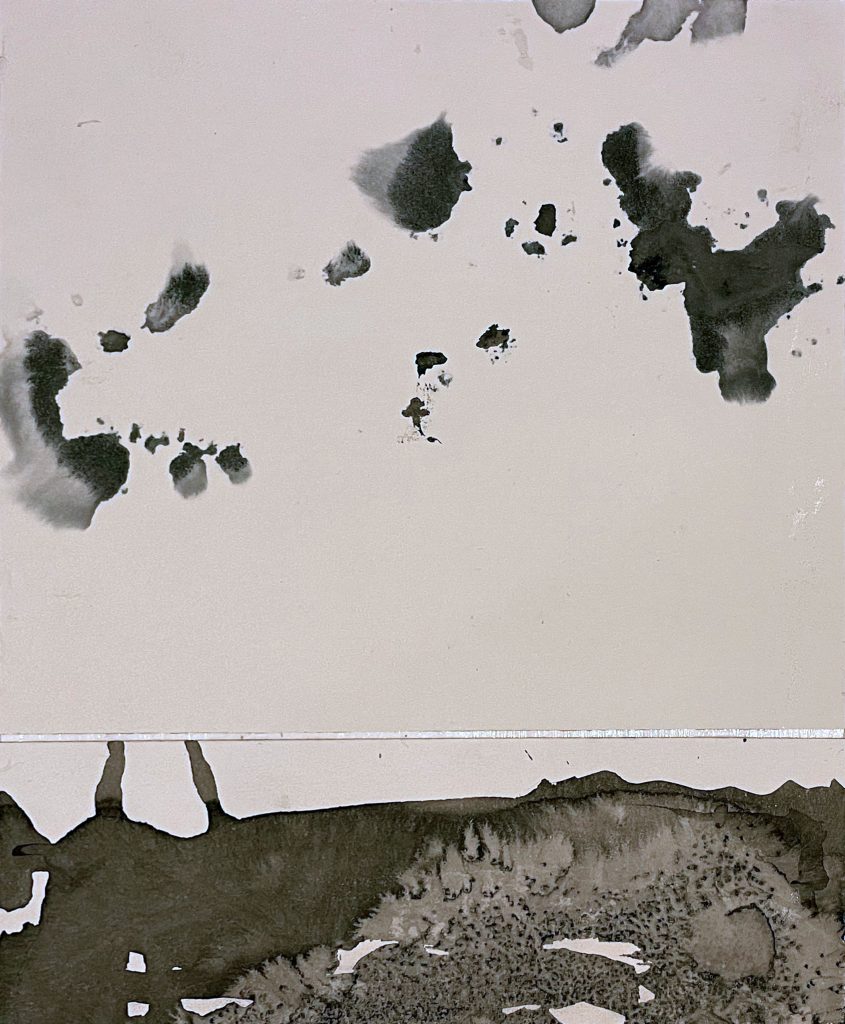 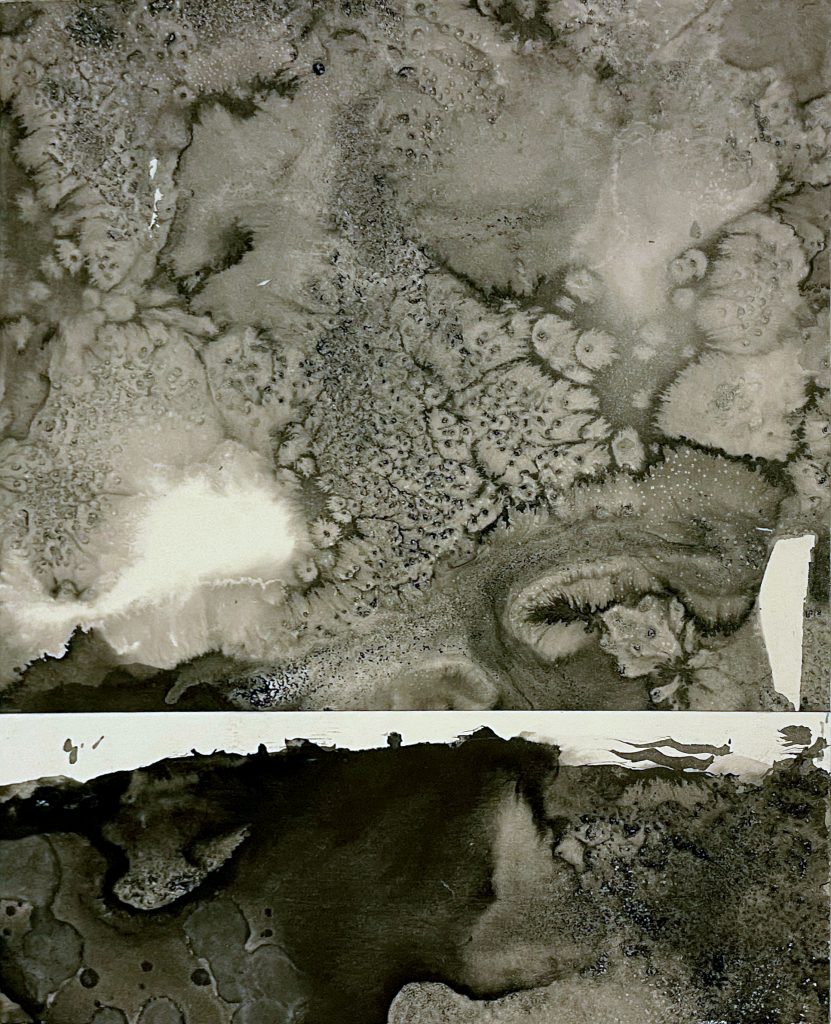 In his collages, Kasicharernvat works on paper with Sumi and sometimes walnut ink, pinches of salt added to create texture, and some white acrylic washes. Generally, the collages are made from cuttings of two separate works, juxtaposed on a horizontal axis. The associations with landscape may be most immediate: above and below, sky and earth. In one untitled work we might see the spray of water above the ocean swell. But more often the horizontal axis is used to create dynamic pairings of weighty masses, a dance of tension seeking resolution

A longtime regular at the Guthrie Studios in downtown Salt Lake City, Kasicharernvat has, for the past several years, made his home at Poor Yorick Studios in South Salt Lake. His studio is a bright, orderly place, with just a few touches of chaos: art books line a shelf in one corner, flanked by a stack of flat files; the press takes center stage while a table lined with newspapers is ready for messier endeavors. With the Phillips show up (through Nov. 11), the studio is now home to splashes of color, much of it works on paper, which Kasicharernvat plans on using for more collages. 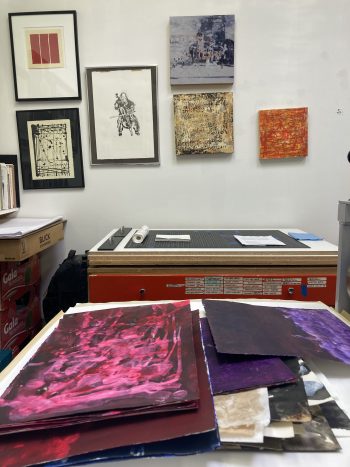 He visits the studio a few times a week, alternating with the days he continues to teach tai chi and aikido at the university. He has been an instructor since he moved to Utah, in 1977, and is an emeritus trustee to the board of Aikido Mountain West. The “way” of aikido has provided a longstanding anchor in his life. He speaks fondly of a friendship developed with a fellow student, met on the first day on the mat, that has lasted for close to 50 years. The art world has provided something similar. He notes that, odd for someone from Asia, he has lived his life away from his family. “I think the artists became my family.”