As it happens, the root meaning of the word “design” is to mark. That could be because designers do a lot of drawing, but it’s just as likely to be because what designers want is to leave their marks on the world. That might explain the significant changes we’ve seen over the years at the Division of Arts & Museums’ DesignArtsUtah exhibition: innovation in what gets designed and what, among those designs, gets noticed. In the past it might have been fine beverage ware. Then, more recently it was water bottles for hikers, bikers, and campers. The more elegant standards still carry weight: the Best in Show award for 2022 went to David Delthony of Escalante for his hand-built, sculptural chairs. But then the Jury award goes to Aaron Smith, a student at Utah Valley University (UVU), for a set of SLC Bicycle Maintenance Posters. If you felt a thrill when you read that, you’re not alone. Design responds to a plethora of influences, not only beauty, elegance, and success in filling a niche, and this year’s 25 designs by 18 designers tend to focus more than ever before on building a world in which we can not only thrive, but survive.

UVU’s graphic arts department got the message: student Makenna Martin’s pristine and elegant “Down With Covid” pamphlet clearly intends to elevate anti-Covid campaigning above the squalid mental connection to disease and suffering that discourages the public from public health efforts. The opposite tack was taken by Draper’s Danielle Skinn, who boldly showed a disintegrating wool cushion right next to a beautiful and inviting new one. Her purpose was to show that natural fibers are both far more cozy and, when the time comes to discard them, more likely to return naturally back to nature. Implicit in her display is a comparison to the slick, hard surfaces of petroleum-based, synthetic fibers that might still be intact after untold years in the landfill.

With million of tons of plastic trash polluting our land, air, and especially our water, it may seem natural that textiles haven’t received as much attention. Yet a major sources of solid waste is discarded clothing, much of which has either not been worn out or even not worn at all. Short of making, selling, and buying less clothing — not a perfect solution — one way to help is to realize that “once is never enough” — that instead of trashing clothing we no longer want to wear, we should pass it along. So the University of Utah’s Graphic Design Program advertises the Worn Again Clothing Exchange, and their poster for the event includes images and ideas for how (and why) we can all make this concept a permanent option for all who wear clothing.

As important and satisfying as it is to see design directed towards individuals, it’s necessary to keep in mind that it is large operations that can make the greatest changes in our planet. Builders, manufacturers, and in an increasingly service-and-entertainment-oriented society, artists — image makers — can play major roles. The industrial giants known as Meta and Marvel Studios don’t show much concern for Utahns — though the same might not be said of Elon Musk — but professional designer Roberto Zavala clearly has a dream of a polychromed city that could be built if enough potential residents wanted it. Less colorful, and perhaps more practical, Clair Davis’s “Exit Store” for the Natural History Museum of Utah’s Rio Tinto Center has the potential for being built right now in all sorts of places. Essentially a self-storing retail outlet, it features display modules and fixtures that stow behind sliding wall panels. Imagine a retail outlet or café that instead of closing during off-peak hours, completely disappears, making no demands on staff or space for other uses, but is ready again in minutes when the consumers reappear.

Strawtegi combines “straw” with ‘”strategy,” and refers to a larger plan to eliminate materials that emit CO2 during construction, which now produce an estimated 40% of annual CO2 pollution. Those materials are to be replaced with ones that, like straw, can sequester more of the CO2 currently emitted. The “Strawtegi CO2ttage,” designed by Susan Klinger, combines numerous such materials in a building designed to fit into the existing housing stocks, either as an addition to an existing structure or an entirely new building. This emphasis on not making the new seem alien to the existing is one of the more promising ideas in this year’s exhibition.

Question: when was the last time anyone saw prosthetic hands skillfully washing ripe cherries? The question is asked because it’s hard to imagine a better example, of how design makes the world a better place, than exquisite extensions of human anatomy that restore function, while leaving the appetite not just intact, but whetted. For now, the place to see such marvels is the UA&M DesignArtsUtah2022 exhibition at the Utah Museum of Contemporary Art. 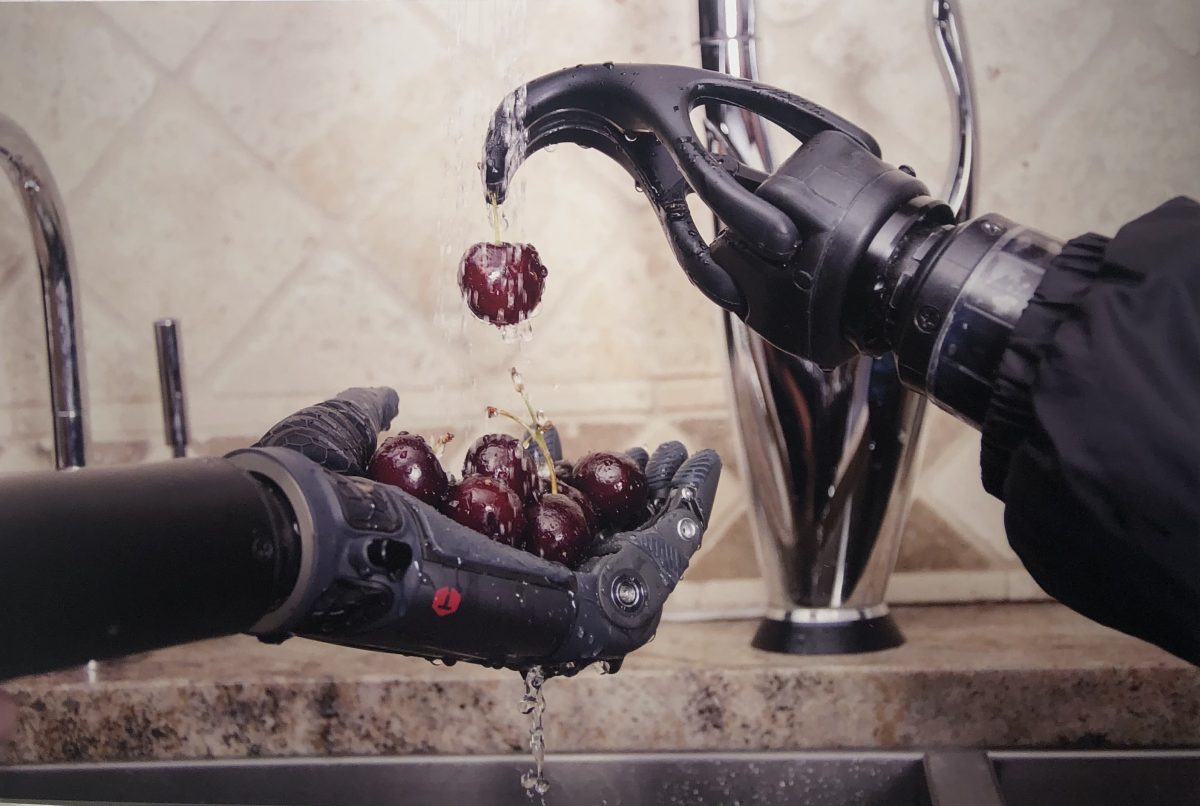