After Salt Lake and Park City, it’s time for some Utah County glass with an exhibit of the glasswork of David andJeanne Gomm at the Covey Center in Provo. The husband and wife team are featuring works of stained and sandblasted glass with Lynde Mott, who is showing her oil paintings at the show entitled, “Visions of Light.”  The opening reception, which was attended by hundreds of visitors despite rain and snow, was part of Provo’s First Friday Gallery Stroll. Jeanne and David attended the reception to teach the guests about stained glass.

“This show really came together,” said Jeanne. “We like the way the hanging stained glass floats in the air in the center of the room, and Lynde’s paintings fill the walls with vivid colors.”

Gomm Studios built a four-panel stained glass scene (above) in mostly clear textured glass especially for The Covey Center for the Arts.  The mountain scene which is on display throughout the show, is a representation of the actual mountain skyline to the East of the arts center, even featuring the “Y” on the mountainside.

David said the stained glass looks better during the day. He encouraged guests who attended the reception to come back during the next day to see the windows. 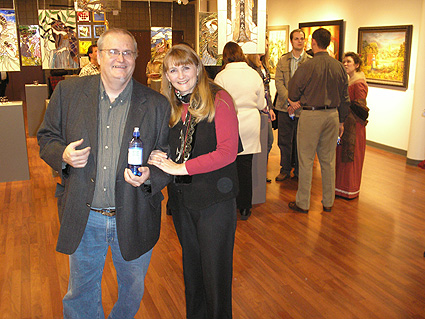 The Covey Center is in Provo at 425 West Center Street and Visions of Light continues through Dec. 27 from 10 a.m. to 5 p.m. Mon. through Fri.

About the Artists
Jeanne and David Gomm build stained glass windows in their home studio in Provo. They build stained glass in the style that Louis Comfort Tiffany pioneered in the late 1800’s which is a very labor intensive method, but is very strong and allows them to create a great deal of detail that other methods wouldn’t allow. They have designed and built stained glass windows together since 1983. After receiving a B.S. in Education with a minor in Industrial Arts, David taught stained glass at Missouri Southern State University. Their company built many large commissions including a 13’ Nativity scene for the city of Piece City. Jeanne has been teaching and designing stained glass for over 20 years. In 2000, they moved to Provo, Utah and started building stained glass full time in 2001. They have seven children, and 11 grandchildren. To learn more about Gomm Studios, visit www.gommstudios.com.

Lynde Madsen Mott is an historian with a brush. Her passion to create accurate images of the past propels her to sew original costumes, collect or rent antiques and spend hours in intense research to the end of compiling it all in her paintings. She graduated with a BFA in illustration from BYU in 1997, and began focusing almost exclusively on19th century historical illustration in 2000. Her work has been published several times in The Ensign, an LDS magazine, and is currently represented by Altus Fine Art in American Fork.

She resides in Pleasant Grove with her husband, Randy, and their three boys: Jonathon, Daniel and Isaac. To learn more visit www.altusfineart.com.