Utah Chamber Artists: Bernstein, Mozart and the Miraculous Case of the High “C”s 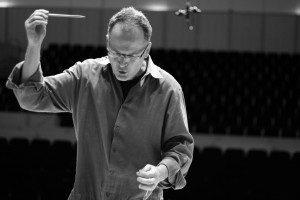 Once upon a time I hated all music written after 1900. That statement was true for all music including pop and classical. Shocking, I know. Little by little I happened upon pieces of music that blew my mind, until I finally became the music nerd I am today — wildly obsessed with modern music. Now I pretty much hate everything written before 1900. Just kidding. Sort of…

One of those modern pieces that blew my mind is Bernstein’s Chichester Psalms which I first heard as a lowly freshman or sophomore at BYU. Utah Symphony performed the piece with their new (at the time) music director, Keith Lockhart. I
followed along thinking, “this isn’t too weird,” when suddenly they performed the second movement (the text is Psalm 23 in Hebrew) with a young boy soprano from the Madeleine School. My mind wasn’t just blown – I was literally brought somewhere else entirely new. It was so beautiful that tears were streaming down my face. I was officially open to the concept that modern music could be cool. And beautiful. And amazing. And, utterly moving.

I’ve always wanted to hear it live again (recordings just aren’t the same) and now here’s my chance (and yours). Utah Chamber Artists, under the helm of Artistic Director Barlow Bradford, will perform this gorgeous work on February 28th at 7:30pm at Libby Gardner Concert Hall as part of their “Mozart & Bernstein: The Long and Short of It” performance. I have long admired their beauty and precision, and I can’t wait to hear this work in their more than capable hands…er, throats. Not only that, but I’ll hear a lot of the same symphony players I heard back in 1999 since many of the orchestra members of Utah Chamber Artists are also members of the Utah Symphony.

Guest artist Celena Shafer will perform the “short” Bernstein work on the program, the aria “Glitter and be Gay” from Bernstein’s opera Candide. This aria is hilarious and unbelievably, almost atrociously high. It’s actually one of this music nerd’s own showpieces, and I’m excited to hear it in the masterful technique of Celena Shafer. I deeply worship Celena’s beautiful voice. She is in demand all over the world as a soloist and we are lucky she is based in Utah and supports the music scene here when her time allows. In this piece, the character Cunegonde is singing about how she hates being a “kept” woman, and yet, she loves all the beautiful jewelry… and there’s not just one but oh, ten or so HIGH C’s!!!!!!!!!! Not to mention the final (held no less!) E-flat. This is vocal pyrotechnics. Don’t forget to fasten your seat belts!

Shafer’s personality is just as fun as her voice is beautiful: “Barlow was my theory professor at the University of Utah when I was a freshman and I had a huge crush on him!” she says. “I remember receiving extra credit for his class by attending a Utah Chamber Artists concert. I was mesmerized by the unique choral sound produced by UCA. I’ve been a fan ever since. It is such fun to return to sing with UCA.”

Now if you’ve noticed there’s both a long and a short piece of Bernstein’s on this “Long and Short of It” program, and that Mozart is also part of the title, then yes, added to this already perfect concert is nothing less magnificent than Mozart’s Requiem. This is the famous piece Mozart died before finishing. You might remember it from the movie Amadeus. This work is beloved for good reason. Celena will join a quartet of incredible singers for this piece: Kirsten Gunlogson, Tyler Nelson, and Michael Chipman. The short Mozart work on the program will be his “Laudate Dominum,” which will again feature Celena. You might recognize it once you hear it.

Concludes Celena: “The trick with this concert for me will be the ability to switch between two contrasting styles. The Bernstein requires vocal agility and stamina, with a ton of bravado (and vibrato!), while the Mozart requires such an intimate sound (and less vibrato!).”

Don’t miss this outstanding concert. I’ll be there!

kingtix.com (or at the door)

If you want a chance to win free tickets, “Like” them.