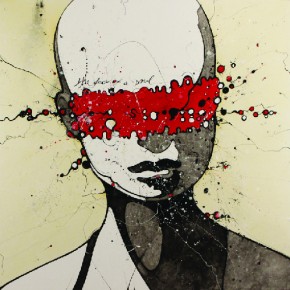 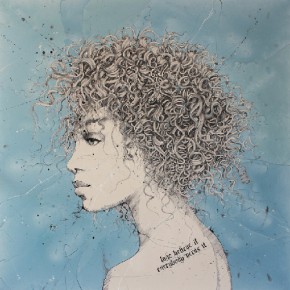 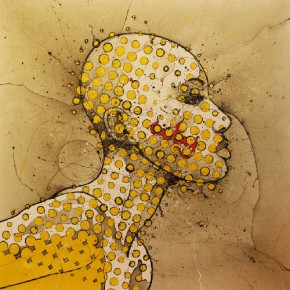 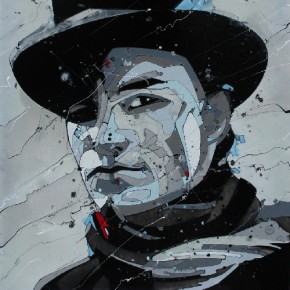 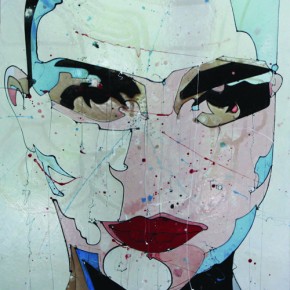 If you haven’t figured out what “urban art” is, or thought it was just skateboards, skulls, and graffiti, please see the Jimmi Toro exhibition at the Urban Arts Gallery in Salt Lake City’s Gateway Mall. It may dramatically elevate your earlier perceptions.

Toro, winner of the top award in last year’s Park City Arts Festival, believes the only way to really become an artist is to be prolific. All the academic or other training you acquire may have value, but you won’t find your own voice as an artist until you’ve put in 20,000 – 30,000 hours. This exhibit not only demonstrates where Toro is today, creatively speaking, but where he’s been along the way.

One whole wall is devoted to a kind of timeline of Toro’s artistic journey, from early exercises in drawing accurately, anatomical studies, and graphic design to his first explorations in abstraction with an emphasis on line, pattern, and color. Certainly fellow artists will appreciate this autobiographical lesson, but it is also an education for the casual or serious art collector. Why does a painting cost $7,000, or more or less? It’s not just the size and the cost of materials and labor; it’s all those 30,000 hours it took to be able to produce it.

The main exhibit is some 70 paintings from several different bodies of work sharing a common visual language. Toro’s work is mostly portraits of people, though there is also a collection of bulls and a few paintings that seem entirely abstract. Oh, and a motorcycle. One collection of paintings interprets in paint, Toro-style, photographic portraits by local photographers. Another collection translates Toro’s own song lyrics into visual language. And another collection, honoring collectors who don’t have thousands to spend, fills a wall with 10-inch square portraits, which go together so nicely, it could be one large work of art.

Much of Toro’s 30,000 hours of preparation for this point in time was spent on drawing the human form and faces. He can capture a likeness as well as the photographers whose work hangs beside his interpretations in the exhibit. But he chooses to abstract the face into planes of different values, or lines delineating planes or value patterns. Despite the abstraction, the likeness is there, along with the beauty of the subject and expressive application of the paint.

In fact, beauty seems to be at the core of Toro’s aesthetic. He notes that in his music, which he writes, performs, and records, he also wants to align with goodness and beauty. “There’s too much negative messaging in music,” he says. “Not that there isn’t also love and good things, but that’s the direction I’m going.”

One painting, “The Face of Being,” interprets his song about children who are not recognized as someone special. The text beside the painting ends with “May they find their own seat in their own house; may they find their own heaven.” The painting shows a face covered by chaos. But rather than taking his work in an emotionally dark or literal direction, Toro’s use of line and color produces a more uplifting feeling inviting the viewer to reflect on the connection between words and image.

Toro’s work clearly shows the influence of his background as a graphic designer working for ad agencies to sell products. However, as a fine artist he doesn’t have to sell something or convince anyone of anything; he can “create just to create.” He’d rather inspire than convince.

While his work may be a bit reminiscent of pop art in its graphic quality, bold color, and, in some ways, appropriation of the cultural norm of beauty, his style is his own. Another part of his 30,000 hours of practice has been invested in process: how to make oil paint flow off the end of a spoon with just the right amount of control or lack of control. He needs that chaotic, uncontrolled part of the process to unravel him from the realism and accuracy that is second nature. Yet, he needs some control to accomplish the likeness that he wants to capture in a portrait and the beauty that goes with it.

He seems to alternate between wild improvisation, allowing black lines, thick and thin, to wander around and off the edge of the panel, and deliberate pattern-making with circles and other shapes that require a very steady hand; another product of those thousands of hours of practice.

Toro often works from photographs and may start with a few pencil lines on the panel to establish the perspective and proportion of his subject. But his color palette for each painting is improvised. One color calls for the next, he explains. Though intuitive in nature, that, too, is a skill acquired through thousands of hours of practice.

This notion of the 20,000 to 30,000 hours needed for artists to develop their unique style is Toro’s expansion of Malcolm Gladwell’s “Outliers” theme. Gladwell’s research revealed that the stars in any field, from athletes to scientists, have typically invested 10,000 hours or more to achieve their expertise. Toro asserts the bar is higher for artists, which is why his advice to emerging artists is always, “Be prolific.”

Toro believes an artist’s evolution doesn’t stop after 30,000 hours; in fact it never stops. An experimental process may lead to ideas for new subject; a new subject for a series may call for experiments in new processes. So this is where Toro is today, but check back in five years and see where evolution has taken him. Right now he’s contemplating a new series of paintings for a summer exhibit in San Diego.

Toro is delighted to be working with the Utah Arts Alliance as a board member and to be able to help the Urban Arts Gallery redefine their mission. His show is the first solo show the gallery has offered thus far.

Jimmi Toro’s work is on exhibit at Urban Arts Gallery through April 6.