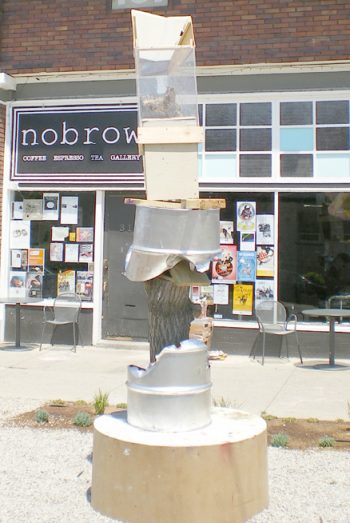 The arrival in Salt Lake of what is fast becoming the preeminent new style of art is marked for the moment by the appearance, on the parking strip in front of Nobrow Coffee, of an object as hard to identify as it is to overlook. Looking decidedly less monumental than a Roman memorial column and more like a totem pole erected to honor street deities, it marks the entrance to and sets the tone for getaway formy, an installation by Massachusetts art team Rachel Salamone and Christopher Wawrinofsky.

In theory, history is a lens that by looking backward prepares us to see the present and future more clearly. In practice, awareness of what has been can blind us to what is coming to pass. This is nowhere more true than in art, a perennially adolescent discipline that thrives on repudiating its parents even as it’s constantly asking if it can borrow the car. Recently, the official version of Modernism has jelled, so that a definitive family tree covering the century from 1850 to 1950 can be drawn. It can even be loaded into boxes and shipped around like a prepackaged tour that comes to us so we don’t have to renew our passports or pay too much for gas. The Cleveland Museum’s touring collection, on view at UMFA until September 21, is a never to be repeated and not to be missed opportunity to see the now settled chronicle of Modernism in 74 major and, more importantly, exquisite monuments. But what about now? What about the future? There’s no money in bringing the debate over where art is going to town, so we are fortunate that a few pioneering souls still dwell by the Salt Lake. The geographic frontier may be closed, but judging by getaway formy and some not-unrelated paintings by Cara Despain up the street at Kayo Gallery, the aesthetic frontiers are wide open.

For a year now, 15 Bytes has been watching the approach of what many observers are calling the new direction in art. Now christened Unmonumental, it’s predominantly sculptural but includes painting, photography, and found images. Its roots are in the found object and assemblage, but some of its parts are carefully crafted before being collaged together, and others are pulled from the trash. At times it’s utterly abstract, but figurative passages appear like gems in organic settings: like pearls in the goop and horny shell of an oyster. It’s as though 40 years ago Pop, the heir apparent, took over the family business, and this younger brother, with the same DNA but expressed differently, has finally succeeded and taken its place. 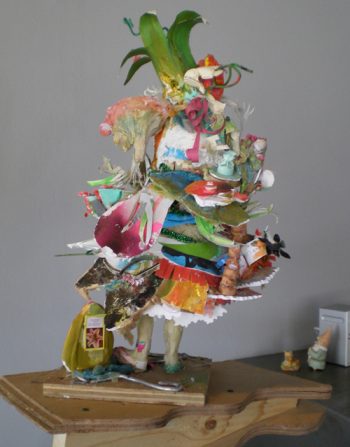 In an essay in Unmonumental (see our blog for May 21), Laura Hoptman compares the artist making this work to a search engine sorting through the objects available for use by artists — which she argues now includes just about everything — for parts that can be consciously chosen and combined into coherent new objects. Salamone and Wawrinofsky undertake this role with robust enthusiasm, resulting in a large assortment of related objects in which initial visual cacophony rapidly gives way to intrigue, recognition, and even enchantment. A jumble of plywood scraps stands crowned by an explosion of tropical colors and forms: identifying human legs in this mix allows eye and mind to play at resolving it into a human figure dressed in a carnival costume made from a fever dream of the islands. Or in that column out front, the most architectural element is a base, shaft, and capital made from an oil barrel being blown apart by the growth of a tree.

It’s not necessary to analyze these sculptures or the framed images that hang on the walls between them: they can be enjoyed for their exuberance, punctuated and leavened by the periodic recognition of an appropriated kitchen utensil or ornamental device. But faith that amid what at first resembles chaos there is an organizing intelligence and not just a set of inspired accidents is the first step to really getting Unmonumental. A good opening exercise is to wander around the café visually collecting all the cubes. These mysterious, geometric labyrinths, like fish traps for unwary but swiftly gliding thoughts, occur standing alone, mounted on the wall, and embedded in larger accretions. Made from shards of organic or industrial waste, some parts painted and others left raw, they are like knots: patterns that we can move from one material to another — string to rope, splinters to plastic sprues — and that maintain their identity regardless of, though not indifferent to, the given material manifestation of the moment. 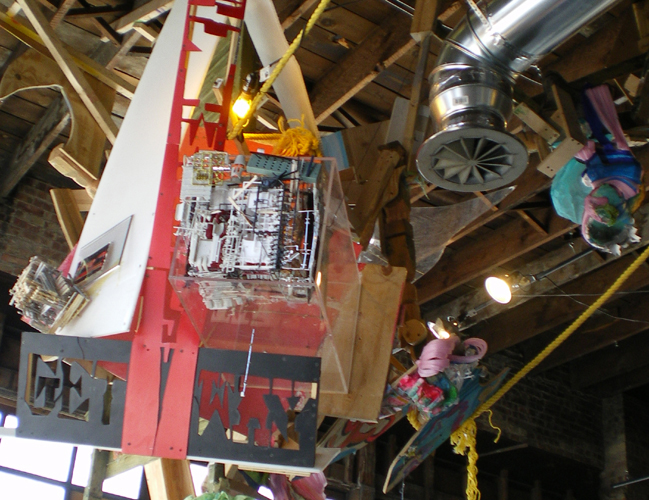 The various assemblies throughout Nobrow, like the framed paintings on the walls of the UMFA, were built elsewhere, transported here, and adapted to the space they now fill. Yet so accurate is the verisimilitude with which they invoke our quotidian lives that it is sometimes hard to tell what belongs to the art and what belongs to the coffee shop. That piece of ductwork with the bar code label still attached . . . sculpture or air conditioning? Flexible electrical conduits start in the store’s wiring but end up on light fixtures seeming to be part of the work. There is no attempt made to distinguish the two sensibilities that contributed to the whole, nor to label its parts, or even to make clear if this is one huge work or ten smaller ones. Instead, it displays one of the essential characteristics of information in our time: we are always coming in on things already in progress, seeing them through the keyhole of our personal perspective, and we never know for certain what we got and what we missed. 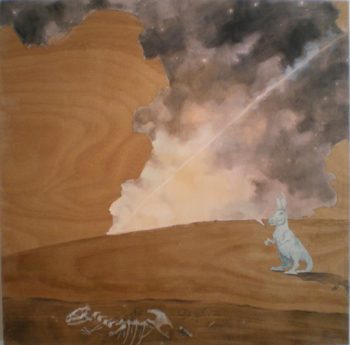 Unmonumental began in sculpture, but it wouldn’t be so important if its impulses weren’t also driving other arts. The kinship between the assorted heaps at Nobrow and Cara Despain’s clean and witty optical puns may not be the first thing viewers notice, but it runs both deeper and closer to the surface than their shared playful demeanor and stress on materiality suggest. In “Grim Narrator” the same panel of organically grained plywood depicts sky, landscape, and foreground setting with casual ease, while a skillfully rendered cloudscape is hijacked by a small, triangular fillip to serve double duty as the pictorially rendered speech balloon emerging from the mouth of the title character: a dinosaur wearing clip-on rabbit ears, evoking those paid spokesmen who everywhere pretend to be disinterested witnesses. Lying on the ground like evidence before him are the skeletons of hominids (drawn) and another dinosaur (painted). Should someone object that, Hollywood notwithstanding, these two species never coexisted on Earth, the artist reminds us that in today’s media-fed mind, fables and facts lie close together, freely crossbreeding. Why shouldn’t cave men watch rockets fly into space, or baleen whales wear braces? After all, aren’t conspiracies and science both mere theories? Besides, whose fault is it if we view disparate mediums, the drawn and the painted, as parts of the same picture?

In “Parallax Point” the affinity to Unmonumental is unmistakable. Here again the unpainted grain pattern unifies the image, recalling inlaid scenery on collectible furniture or Renaissance cabinets. The reference is appropriate, for each dramatic landform creates a lofty aerie from which a seeming family of totemic figures — human bodies combined with animal heads — enjoys a privileged view of the cosmic scene. These miniature vignettes are lovingly crafted, down to the artificial turf that makes their landscaping vividly present and seductively inviting. Similar illusionistic windows into alternative realities are scattered here and there in getaway formy. 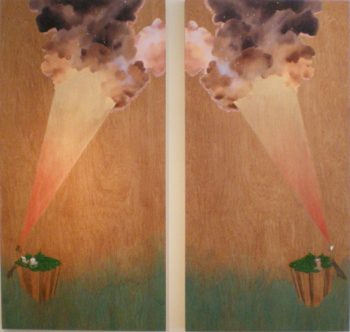 If getaway formy synthesizes the full, overwhelming complexity of how the world looks and what it means today, Despain’s paintings narrow the field of view to allow discerning some of the specific mechanisms it employs. Both employ preexisting structures, mechanical and cerebral, to comment on how things work and what happens when they don’t. Both maintain a refreshingly cheerful attitude in the face of sobering, but resolutely acknowledged fate. Eight years after our country choked at choosing between the dour pessimist and the moronic optimist, the belief that if we open our eyes and pay attention we just might get through this reasserts itself. Anyone who doesn’t understand what is un-monumental about America in the twenty-first century has not been paying attention. Fortunately, Rachel Salamone, Christopher Wawrinofsky, and Cara Despain can help you get up to speed in a hurry. We need all the capable help we can find.

getaway formy, featuring works by Christopher Wawrinosfksy and Rachel Salamone, is on exhibit at Nobrow Coffee through July 14. Cara Despain is exhibiting with Jason Metcalf at Kayo Gallery through July