Layered in the strata of Salt Lake artists, below the hot local art stars and somewhere in between the old favorites, students, and nationally showing Utah artists are those who work just under the radar– up and coming people producing work that is deserving of attention, and who are just breaking into the Salt Lake art scene. In the May edition we looked at Brenda Wattleworth, Claire Taylor, Wynter Jones, and this month turn our attention to Gentry Blackburn, Tessa Lindsey, and Laura Besterfeldt. 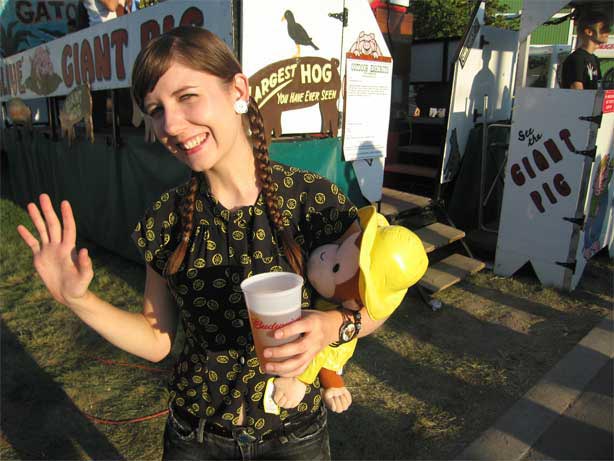 At 177 east and Broadway in Salt Lake City is a portal, a microcosm that shadows what was and makes the past modern. It is Frosty Darling, an artist gift gallery that is in some ways more like an installation created by owner Gentry Blackburn than it is merely retail. Gentry is inextricable from the store’s content: retro-fair housewares, finger puppets, hand painted travel bars, her own impossibly pristine paintings…Gentry is Frosty Darling. It is her art; nothing is an accident in the store, everything is placed and displayed just so–prim and wonderfully strange like the work that comprises it. Besides just the actual paintings and crafts, Gentry painted the trim, the floor, arranged the layout, made window displays and countless signs to cement the atmosphere of her little world.

After several years of artist statements and submissions, and the general fuss of dealing with shows that were in some ways limiting to her work, Gentry became temporarily fatigued with making paintings. She sought to manifest her work by commodifying art, by revitalizing something she feels has been diminished in this generation–the bright, poppy wholesomeness that once was an inherent part of American culture. She wanted to promote aesthetic living, and the beautification, as she puts it, of the everyday environment. But the result is not just a cute, re-hash of pop, or merely novel house decor, it is the bigger picture of her work. It has an edge; a slightly odd, frigid modernity that upon closer inspection reveals the concept behind the immaculate craft. Among the adorable hand sewn and embroidered finger puppets are the occasional characters with screeching monster faces and sagging breasts. Inside what appears to be a vintage suitcase with a clean, inevitably charming 1950’s pop figure painted on the front is a travel bar–it’s a picnic with a twist, with a reckless heart inside. It is state fair, western, and so American, but down and dirty. This is Gentry, it is her art–and the two cannot be divorced; she lives Frosty Darling every day. A master of design and craft, she unearths strange little niches of life that have been forgotten or that don’t typically expose themselves in the realm of fine art. Her paintings are extraordinarily fastidious recreations of old time patterns, prized show horses, and faded popstars. 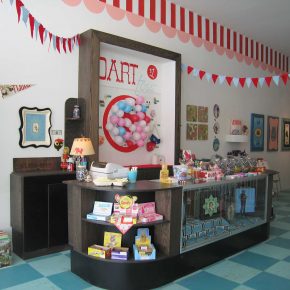 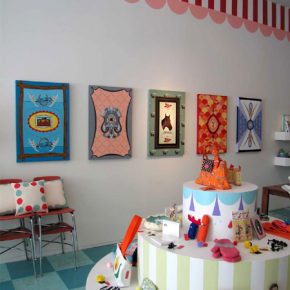 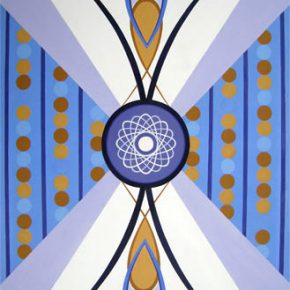 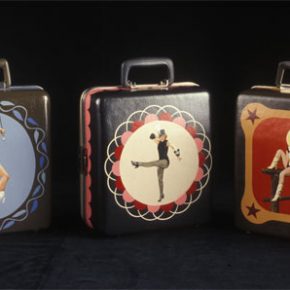 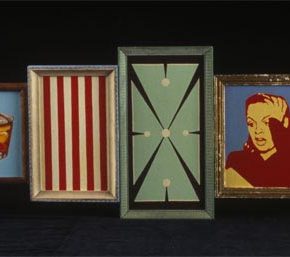 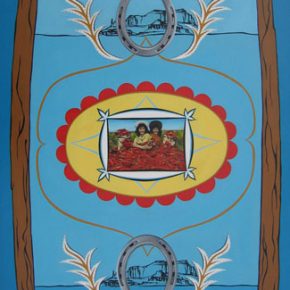 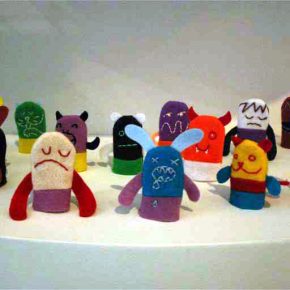 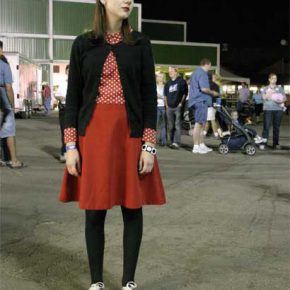 Gentry anticipates beginning to paint again. The work she has planned will be born of the store–smaller format conglomerates of leftover shrapnel from her crafted items. Bits of felt, buttons, and scrap wood should make interesting additions to her clean, classy, ultra-feminine paintings.

TESSA LINDSEY
Like a sixteenth century laboratory, Tessa Lindsey’s studio in Tres Flores is adorned with raw materials awaiting their chemical transformation into the product of their meddler’s vision. Crude chunks of damar, metals in various forms, wax, marble dust and a vast collection of pigments are a few of the items at her disposal. “Those are special,” she says of the large shelf of powdered colors contained in small jars; many of these pigments are the same original compositions that painters used centuries ago. And in keeping with those times, Tessa uses the pigments for fresco painting. It is a faded medium, she says, and is not widely seen in contemporary art. And what is alluring to her about frescoes is the immediacy of time they demand. There is an eight hour window of time in which the work must be completed, which subjects the process and painting to a high level of intent, surrender, and permanence–it cannot be manipulated, and holds the artist at its mercy. The fresco-making process involves much more than just plaster; in fact, it’s not plaster at all. It is actually a lime carbonation cycle–much like the carbon cycle on Earth. It involves calcium carbonate (CaCO3 ), limestone, a kiln, and a resulting lime putty (Ca(OH)2 )—which is the substance the pigments, mixed only with water, will be added and captured into. Eventually the limestone returns to its original state, cured with the painting trapped inside. “It’s honest, naive, and straightforward,” she states, “I think that’s why it died out.” But she wants to make frescoes modern and viable as an artistic medium—she even published a paper in an international lime symposium in 2005 to illustrate the artistic relevancy of lime. 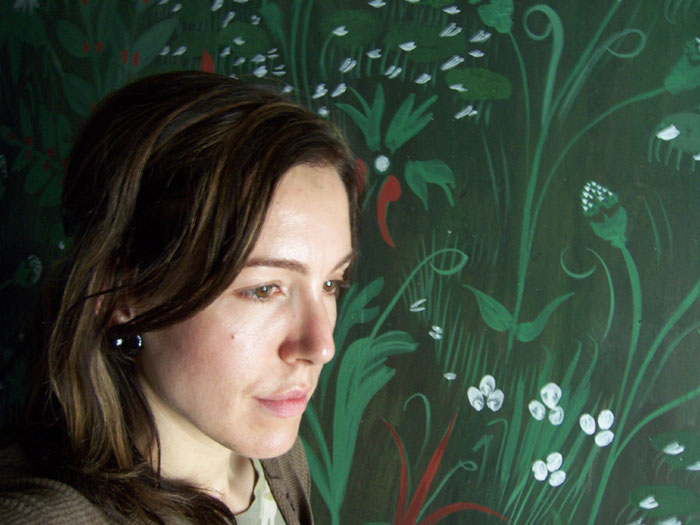 This is what is intriguing and sophisticated about Tessa’s paintings—she is returning the art of alchemy to the process of contemporary art making. This seems to be something that has become obsolete; paints come mixed and tidy in little tubes, and it’s a no-brainer for many to merely dip and apply. But this extra awareness of the chemistry behind the color, and the intimate involvement with the limestone process is what makes Tessa’s work noteworthy. But it isn’t just her frescoes that make her work interesting—it is also her overall attitude and approach to art. Just as frescoes raise issues of transformation, cycles, time, and permanence, so does her other work—which cannot be pinned down to one signature style or tactic. She uses more transient materials than limestone — non-archival papers, thinned paints on raw board…her work is different all the time, is always in flux. There are strange, medieval self-portraits, collages with digitized unicorns and sprio-graph ghosts, and even some comedic Mormon paintings. This fluidity may be a result of or a reaction to the hardened eternity that her frescoes employ; certainly cyclic, corrosive, reactive thoughts aren’t foreign to artists. Not being static is just part of the adventure–“if you can’t make what you want when you want,” she says, “then what’s the point?” 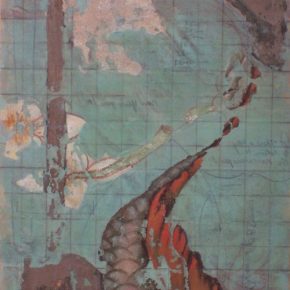 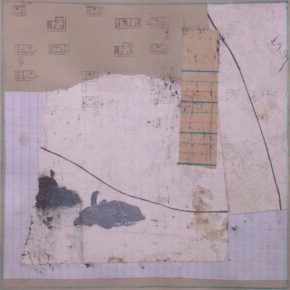 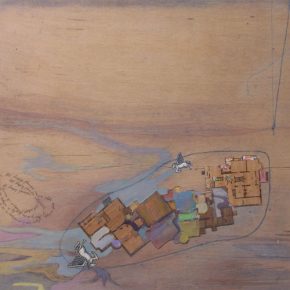 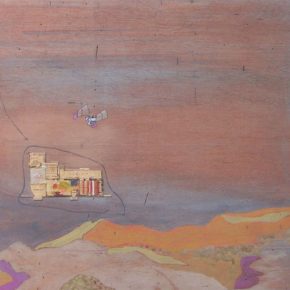 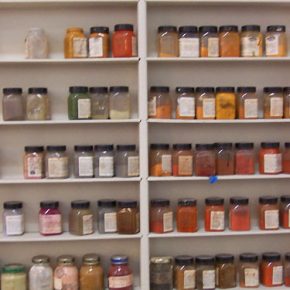 One of Tessa Lindsey’s frescos, seen in the image above, was part of the 337 project. You can view her works at visit her studio at the Tres Flores Open Studio in June and at Artisan Frameworks in August.

LAURA BESTERFELDT
Her apartment, a makeshift studio, is full of peculiar clutter: little wax bits, crude pieces of metal, polished silver nipples, wine and magnifying glasses, and a bubbling caldron of hot wax—all atop a hardwood floor hazardously coated with baby oil. It is here that Laura Besterfeldt, over the last several months, has been diligently toiling over her laborious metal pieces. She is a jeweler who specializes in casting– a method that allows an exact replica to be made of a 3-dimensional object in a metal form. In the case of jewelry and fine art, this prospect becomes very viable. To solidify, to transfer into another form of matter, something that is ephemeral, soft, or living into something precious and valuable in a different sense is a special artistic possibility. It invites preservation, and the creation of human relics; on an anthropological level, it has the potential lifespan to speak for our contemporary art generations from now. Examples of Laura’s work–sterling silver-cast plastic toys, imprints of body-parts, and jewelry made to fit the contours of the specific wearer, are all huge indicators of culture. Her art is akin in many ways to ancient adornments, tools, and symbolic artifacts; since the materials of modern culture are far less archival and precious its material transformation is conceptually interesting. 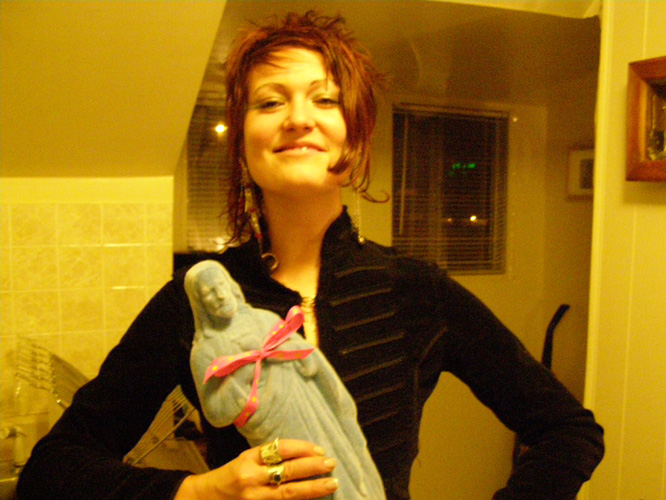 For Laura, the sensitivity of the process makes the work very honest, and honesty is a continuing theme in the pieces she is producing. In the past she has made a series of lockets and other fabricated pieces that dealt with secrecy; they had extremely discreet or sealed off hollows that contained an ambiguous secret of the holder. But the slippery thing about secrets, she says, is you don’t keep them, they keep you. The slow process of opening up and unabashedly revealing merely what exists perhaps is what led to the straightforward approach she now employs. A cast of an object cannot lie, it stands for itself as it is—the act of reproducing it in a more permanent and prized material is what draws attention to it. It recontextualizes the object by merely changing its constituents and placing it under a different form of scrutiny. It now looks like it never has looked before, even though its form is exactly the same. This is what makes it direct and honest.

Laura has cast, among many other things, plastic toy soldiers and nipples into sterling silver. In the case of the nipples, and other skin surfaces, it is a way for the body to allude time and exist as a fragment indefinitely. But it isn’t just her cast metal works that exhibit this notion of recontextualizing objects. A series that she has recently begun work on, Dress to Kill, talks about consumption and waste by reconstructing small pieces of society’s rubble found in the garbage and spring clean-up mounds. Metal bits of an old typewriter, and shards of an old radio take on an entirely new identity—in this case a necklace. Their metamorphosis has rendered them completely unrecognizable from their original state. They escaped becoming more detrimental clutter to an already exponentially wasteful world. Although this is very small-scale recycling, it is Laura’s commitment to both the honesty of her work and it application to a cause that will be pivotal to her career. After casting, carving, and polishing dozens and dozens of sterling silver nipple pendants at a feverish pace, Laura will direct her energy toward a local cause. She will show these pendants at Kayo in June, and a portion of all proceeds will go to a breast cancer survivors program hosted at Centered City Yoga. And she has plans to take it further. It’s nice, she says, to give something back, using her art as the means. 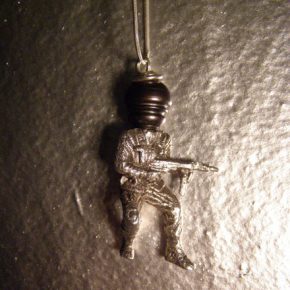 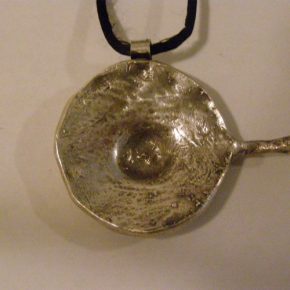 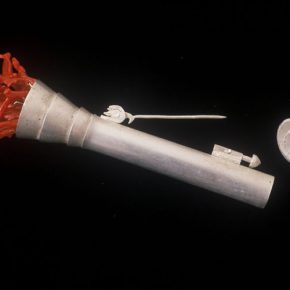 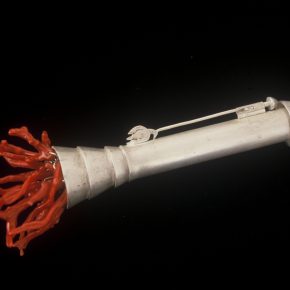 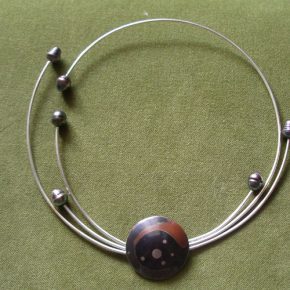 Laura Besterfeldt is currently showing at the Sundance Gallery, and at Kayo Gallery in June and a group show in August. Starting June 15th, her dress to kill series will be available at Redemption Department, the new clothing boutique where James Anthony gallery was located. She also teaches private lessons, and in the continuing education program at the University of Utah.