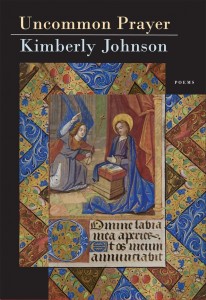 Poet Kimberly Johnson will appear with Meg Day in a reading and discussion of their new books at the Utah Humanities Book Festival, Oct. 1, 2014 at 7 pm. The event is in partnership with City Arts at Salt Lake City Public Library, 210 E. 400 S., 4th floor Conference Room.

Kimberly Johnson’s third collection of poems, Uncommon Prayer (Persea 2014), nicely follows her recently co-edited anthology, Before the Door of God, An Anthology of Devotional Poetry (2013 Yale UP), which gathered devotional poetry in English (in the Judeo-Christian tradition) going back to the beginnings of English verse. Uncommon Prayer is a stunning collection of lyrics—sonnets, prayers, poems of praise, laments, monologues, prose poems—which gives voice to personal and universal themes of faith—religious and secular, serious and ironic, traditional and contemporary. With the fine artistry, precision, erudition, wit, and lexical magic we have come to expect from Johnson, this new collection explores dimensions of faith often avoided in contemporary American poetry. If you know Johnson’s earlier work, you will not be surprised to find riffs on other voices spoken before the door of God—Donne, Milton, Herbert, Blake, Dickinson, Hopkins, Rilke, Berryman, Plath, even Eliot and Whitman, though Johnson’s aesthetic casts its line more often beside the Metaphysicals than the Romantics.

As does the subject of many of the poems, Uncommon Prayer divides into three parts—“Book of Hours,” “Uncommon Prayers,” and “Siege Psalter.” The first loosely follows the pattern of medieval “books of hours”—illuminated manuscripts collecting prayers, psalms, scripture, and other devotional texts arranged for reading, or praying, at prescribed times of the day: Matins, Lauds, Terce, Sext, Vespers, None, and Compline. Books of Hours were designed to help the laity align their lives more closely with the devotional lives of monks and nuns in the monasteries. Johnson’s version, illuminated with painterly imagery and attuned to Johnson’s pitch-perfect ear, sometimes follows and sometimes playfully wrenches awry the traditional devotional pattern.

The opening poem, “Matins For the Last Frost,” begins with an echo of Dickinson, “Patient in their dark hibernacle / wait the twinned lobes of the tulip bulb / hanging like a semicolon.” That last phrase signals the ways in which the words and things of this book will enact their resurrections back and forth into each other, incarnating and dis-incarnating, with the flip of a coin or the pull of the arm of a slot machine inferred in the poem “Blanks”.  While the brave tulips of “Matins” enact their difficult, Roethkean resurrections through the soil, the poem itself blossoms: “Somewhere on the other side of town / some bells begin to raise their brazen; / everything is about to change—”

The promise and seriousness of this poem, reminiscent of Rilke, is playfully countered in others such as “Nonesuch,” whose title puns on the devotional hour, “None.” “Nonesuch” complains to the Deity. The speaker tells God that He shall not be the inspiration and “I” the mere page; not He the harrow and I the fallow field:

Not you the piston whose combusted thrust

shoves the rod that drives my crankshaft.

and you the substance, you the blessed body

absent and sublime and I your accident.

As in Hopkins’s “terrible sonnets,” Johnson’s linguistic play never lessens but only reinforces the urgency of the speaker’s lament.

Along with such overtly religious poems are many striking lyrics exploring the contours of gain and loss in human relationships. One of the finest is “Crepuscular,” which I first read in The New Yorker. After a series of gloomy observations on an urban autumn sundown, the poem ends: “The ignition jump of a car / heading anywhere, taillights red / as the rubber stamp on a divorce decree, / its diminishing rev a metaphor / for the failure of metaphor. The car / is a car leaving, and then left.”

This section concludes with “A Benediction: On the Tulpenwoede of Seventeenth-Century Holland.” Here, we return to the tulip image with which the section began, in this poem blossoming into an account of the mania that seized Holland in the seventeenth-century, when a single tulip like the “Viceroy” might fetch ten times what an ordinary laborer could make in a year’s wages. The concluding lines ring one of the themes of the whole collection—Wallace Stevens’s theme and Buddhism’s central lesson—that “Death is the mother of beauty,” or, more precisely here, that loss and the risk of losing are the source of longing: “believing / that by loving I could hold what I loved, / forgetting that I loved because I couldn’t.”

More uncommon pleasures await us in “Uncommon Prayers,” Part II. Here, Johnson offers a series of inventive dramatic monologues spoken by various objects, some of which speak the ventriloquized voice of God. In these poems, God does the praying through the mouths of ordinary objects, the bug-zapper, the wrecking ball, the catapult, the Lord God Bird. In “The Bug-Zapper,” one of my favorites, God calls the faithful to come and be saved, to be annihilated in glory, in a bright apotheosis. The Bug-Zapper God opens with the invitation, “Come, flame-moth. Come feathered thornwing.” The moth seeking the candle flame is a famous image of religious mysticism, East and West—the soul seeking its annihilation in Union with the Divine. Here, God concludes his seductive prayer to us moths: “My brief lovelies, / Let us spark while we can. I feel a hard rain coming on.”

Another favorite is “Wasp,” which seems a homage to Plath and her bee poems. “My name is Legion, and my sisters’ name / is Legion.” The wasps make a din that is “communion.” And, “Now as the evening star // Nests like a queen, we swarm through the vestibule / Into the vault, and whisper. The paper // Whispers back. It is our stay against the wide, / Illegible night. It is our book of common prayer.” Like the “Om” of Hinduism, or the Stoic/Christian Logos, to the wasp this din is the first sound, the first word, first poem, and (bypassing Frost’s “stay against confusion”), this din is a stay between the transcendent and the stinging flesh.

Part III, “Siege Psalter,” is an abecedarian of prose poems (“Alpha,” “Bravo,” “Charlie,” “Delta,”). Drawing upon an ancient tradition—Hebrew Psalm 118/119 is an abecedarian—these psalm-lyrics voice a wide range of religious emotions, from “Glory be to God for bungled things” to “you love the sound of your own voice, and I have to have the last word.” The poems range widely among subjects, as diverse as Shakespeare’s “Juliet,” and “Romeo,” “Golf,” “Hotel,” “X-ray,” and Alexander in “India.” My favorites are those that are most psalm-like, as my favorites in the whole collection are those that are most prayer-like—those spoken in second person to Deity. In the wonderful “Echo,” the speaker laments, “I run your reverb through my wah-wah, turn all your periods to colons; I slant, if I rhyme at all. I am here, in this deviance, and I am trying to help you find me. As if you were trying to find me.” And in “Sierra”: “I’m marching for that patch of green asplash at the horizon, where I’m certain you await me with soft linens and peeled grapes. The ridgeline juts above it like a saw, the kind that cuts a woman in half.”

Most contemporary American poems of faith stumble over a perceived ironic imperative, a fear of honesty that defeats them at the gate. Johnson leaps that hurdle with grace, learning, and sophisticated wit. Reading these poems is a delight and an inspiration. We listen, privileged to be in intimate attendance to a voice speaking at the door of God. 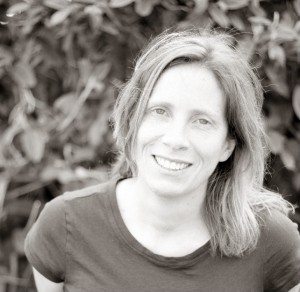 Kimberly Johnson is a poet, translator, and literary critic. Her collections of poetry include Leviathan with a Hook, A Metaphorical God, and Uncommon Prayer (reviewed here). Her monograph on the poetic developments of post-Reformation poetry was published in 2014. In 2009, Penguin Classics published her translation of Virgil’s Georgics. Her poetry, translations, and scholarly essays have appeared widely in publications including The New Yorker, Slate, The Iowa Review, Milton Quarterly, and Modern Philology. Recipient of grants and fellowships from the John Simon Guggenheim Memorial Foundation, the National Endowment for the Arts, the Utah Arts Council, and the Mellon Foundation, Johnson holds an M.A. from the Johns Hopkins Writing Seminars, an M.F.A. from the Iowa Writers’ Workshop, and a Ph.D. in Renaissance Literature from the University of California at Berkeley. Kimberly Johnson lives in Salt Lake City.