UMOCA Exhibit Juggles the Paradigms Flashing in Our Heads 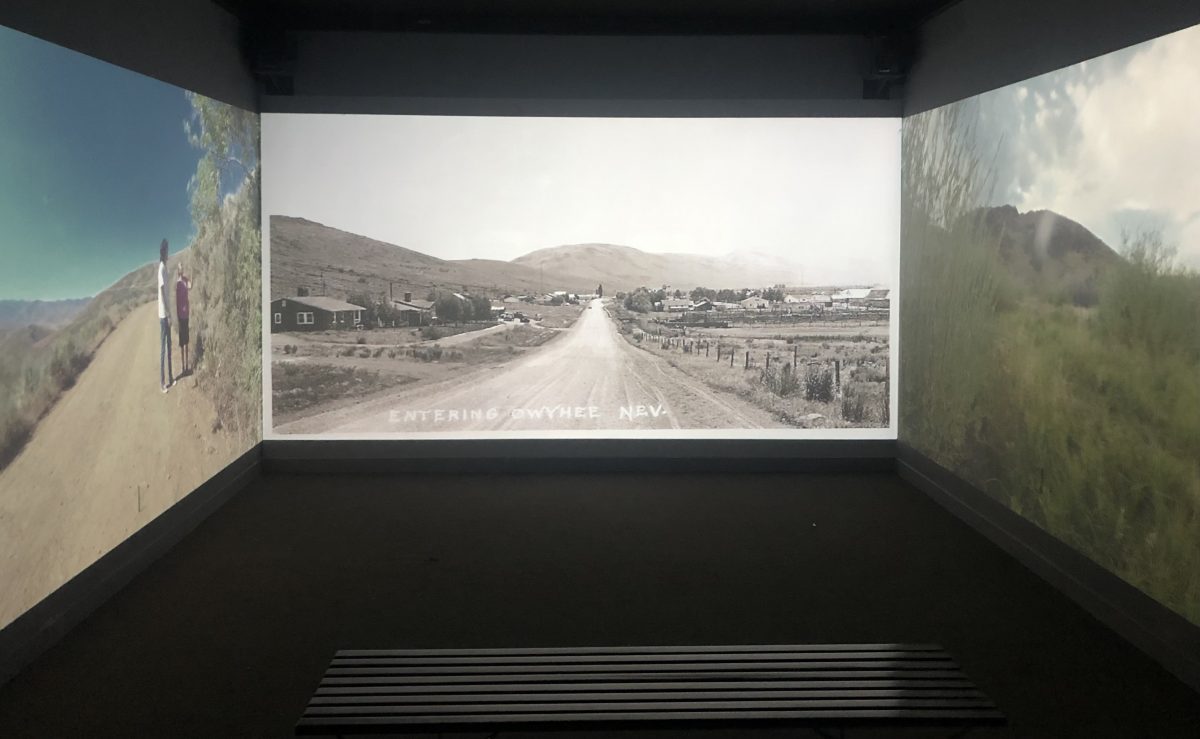 Located in the Utah Museum of Contemporary Art’s Codec Gallery, Shattering the Pictures in Our Heads uses multiple screens to deconstruct stereotypes of the “Mythic Indian.”

Shattering the Pictures in Our Heads
is the most sophisticated exhibit currently running at UMOCA, presented in a gallery that uses “codec” technology to surround an audience with virtually seamless images, some of them drawn from sources we all grew up with, while others have never been seen before. The ones we grew up with, including clips from Hollywood films, are the video program’s targets, while the new ones are meant to take their places. Audiences from every conceivable background will stand to learn from and be changed by seeing these contrasting images, which is why Shattering the Pictures is being shared with them in this popular setting. But we need to know that, while welcome, we are not its primary audience, and knowing that may help better appreciate what we are shown.

A sophisticated viewer may have already realized that almost everything we see today wants to leave an imprint: to create a default or background image in our heads to filter whatever else may follow. There’s a war going on over conflicting products and concepts like “freedom” and “social responsibility,” and whoever gets into our heads first can try to keep later arrivals out. What we may not be so quick to see is that our heads are already full of such gateway pictures we’ve absorbed, often without noticing. Part of the standard skeptical mindset about new ideas and efforts to change our old ways of thinking is the result of such pre-conditioning.

Pictures are much better at reprogramming human minds than words. One person will tell you that the name “Indian” (or Indio) comes from Columbus’s belief that he’d sailed to India. Another will say it’s because the Catholic priests that accompanied him thought the inhabitants of the New World were “In Deo,” or children of God just like their European visitors. The minutiae of language, a system of categories, becomes involved, though problems arise. Consequently, Shattering the Picture in Our Heads avoids labels or explanations that argue for one position or another. Instead, its makers dredge up the old images that prevent almost everyone from seeing certain things clearly, and set them alongside more recent and accurate alternatives meant to replace them.

To do this, Edge of Discovery, a media arts group that is the original source of Shattering the Pictures, offers the Deep West Filmmaking Mentorship, a program that connects filmmakers with communities it feels are in need of help “to discover and amplify voices that have been historically silenced, simplified, and minimized.” So on the one end, there is a sophisticated organization that can compile video from a variety of sources that will be edited together and shown in suitable venues, such as UMOCA. On the other end are filmmakers who seek out Indigenous peoples willing to share their lives and the places where they live them. Their combined efforts have resulted in an unstated number of video presentations, each unique and custom-made to address a local, underrepresented population.

Each of these presentations “deconstructs the ‘mythic Indian’ stereotype as reductively and commonly depicted in popular culture through documentary film.” In practice, this means it shuffles together irreconcilable excerpts, some of which are distortions that can be found in the popular discourse of film, TV, and the Internet, while others have been carefully produced and curated from authentic voices and viewpoints held by the Shoshone–Paiute Tribes of the Duck Valley Indian Reservation, on the Idaho-Nevada border. But perhaps because Utahns put a premium on homegrown evidence, or possibly because everyone finds proof more convincing when locally sourced, the third component consists of film brought back by their filmmakers from actual Utah sites and sources.

At UMOCA, the resulting films are projected in front of and on both sides of the audience, resulting in both visual and auditory immersion. Old Hollywood films of Indians attacking wagon trains alternate in both time and space with dignified images of traditionally-dressed tribal members. Then, while the viewer’s mind juggles these two incomplete paradigms, the adventure-entertainment and the anthropological-museum piece, several examples of young tribal people enter the scene and interact: a couple frolic, play, and seemingly respond to what’s happening on another screen; two young men in mixed tribal and street clothes play drums. Dirt roads, towns, and a swiftly flowing river through tall grass are seen.Given that these are sanctioned images, audience members pretty much have to accept that the people are proud and self-accepting, while the producers are comfortable with presenting them and their homeland as good examples. Given my sympathetic approach to such people, I can report an entirely favorable response on my part. More importantly, as I observed a young family watching this together with intense interest, I could only conclude that this is one more group that needs to see itself reflected in a favorable way, and who are to be commended for taking advantage of the means now available for them to produce their own positively and affirmative portrait. As for those subcultures out there that don’t need further encouragement, let’s not think about them for a change, while in the presence of these worthy scenes of little known, but entirely delightful people. 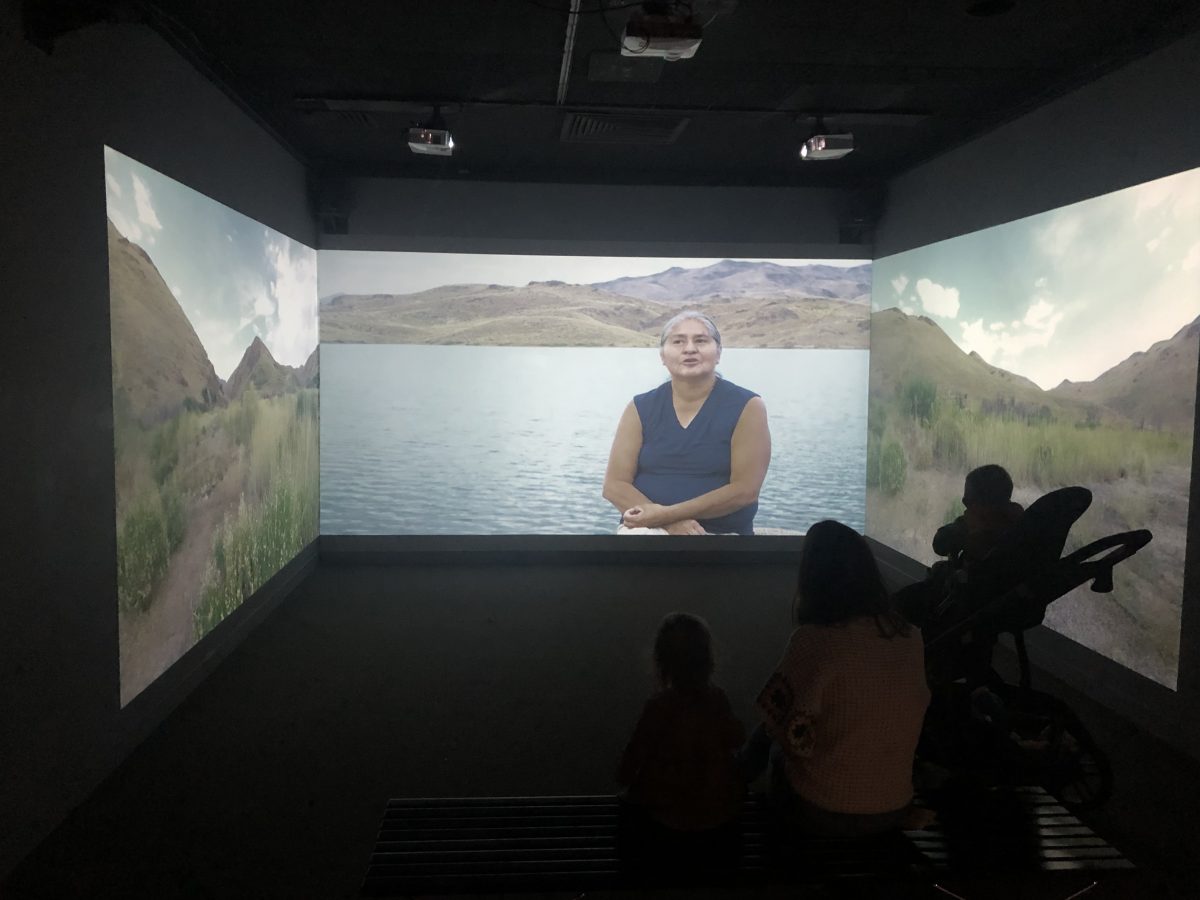 Shattering the Pictures in Our Heads, Utah Museum of Contemporary Art, Salt Lake City, through Apr. 30.