As a general rule, masks are intended to conceal the wearer’s identity. Why, then, does Hakeem Olayinka routinely conceal the faces of his Nigerian subjects from view? Nigeria is a country that has seen its environment destroyed by outsiders seeking petroleum, even as its own government murders citizens who resist the depredation. One good reason for the artist’s strategy, acknowledged by his proponents, is that the mask draws attention to the eyes of its wearer, such as the subject of “She Looks Good in Red.” In this painting, the hue of her face covering so closely matches that of the background that it effectively all-but beheads her, leaving her eyes and mouth floating in space. This has the paradoxical effect of dividing her in two, her body revealed by a tiny, cocktail-style dress while her face is modestly hidden. By juxtaposing these conflicting demands made on women to be objects of desire and virtue at the same time, Olayinka reveals a few of the many impossible demands women routinely face. But there’s something else here. Prior to the conflict over how to participate in society, the mask recalls that most Black people and most women were faceless because they were excluded from participation in public life, and many, perhaps the majority, are still denied their autonomy. They are, in effect, seen by those in power as bodies to fulfill whatever purpose power requires of them, including to die when they get in the way of the powerful.

Art today frequently concerns such issues of identity and autonomy, but Olalinka’s plea is delivered on an aesthetic level — in large part through the choice of visually powerful colors — not all such works achieve, or even aspire to. The same may be said for Madrona Redhhawk, a professional model who puts her own face at risk in her videos. Metaphorically updating the old “pie-in-the-face” vaudeville gag, this descendent of Choctaw, Creek, and Shawnee ancestors mocks online instructional videos with her own versions that inevitably go wrong, so that some elaborate ploy always ends up with her face “painted” in vivid colors. While there can be little question about her ultimate point, she refrains from heavy-handed moralizing in favor of a traditionally far more effective, because lighthearted, tactic in which she shares with viewers how her dignity comes from her character, from who she is, not what is done to her. 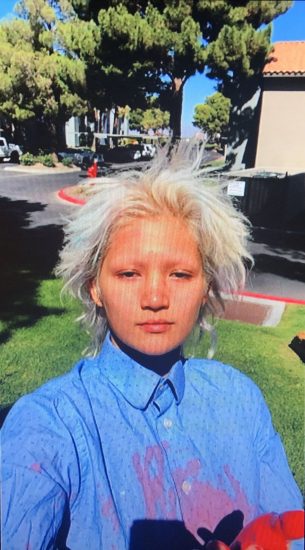 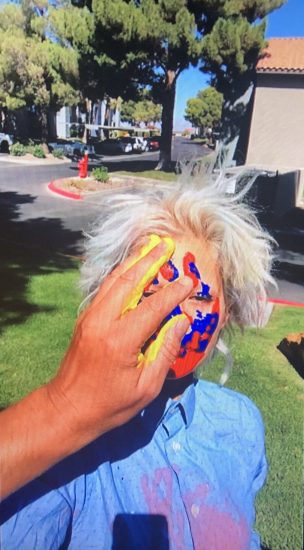 There are 19 artists in UMOCA’s I know you are but what am I, and as the subtitle has it, each finds a revolutionary way to “frame” personhood by overturning — “deframing” — conventional ways that bodies have been viewed in the past. Dana Robinson revises images of Black bodies drawn from vintage copies of Ebony magazine, a ground-breaking venture in commercial Black self-assertion that she feels is due for a tongue-in-cheek reconsideration. In her paintings, the deliberate mismatch of low resolution paint application where fine detail is called for stands in for the way mass media blurs individual’s stories. Video artist xiouping films just her mouth as she enunciates names she has been called, but in place of precise and clear presentation uses a sound recording analogous to the close-up of her video image, a sea of sound in which the words used to characterize and identify her are lost in an overall environment of so much noise. 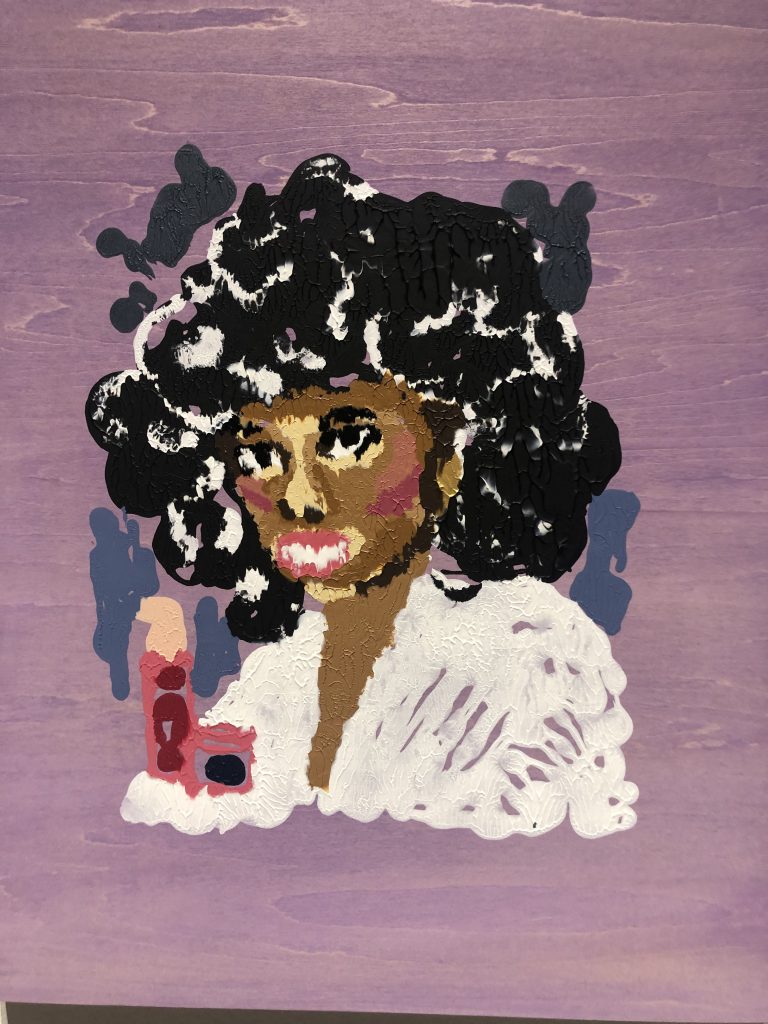 Dana Robinson, “Have It Your Way, It’s the Only Way”

A strong example of how this body of art often functions counterintuitively is Liu Bolin’s “Supermarket II (from the Hidden in the City series).” These brilliant tours-de-force of body painting place the figure of the artist in richly detailed urban settings that he and his clothing have been painted to match, thus disappearing into the photograph. Evaporating may seem a dubious way of asserting oneself, but the impossibility of completely hiding makes Bolin’s presence all the more visible as the captivated viewer seeks him out, and the reality of living the self-effacing life so many people are forced to accept in the face of open hostility to their presence or their identity is made absurdly clear. 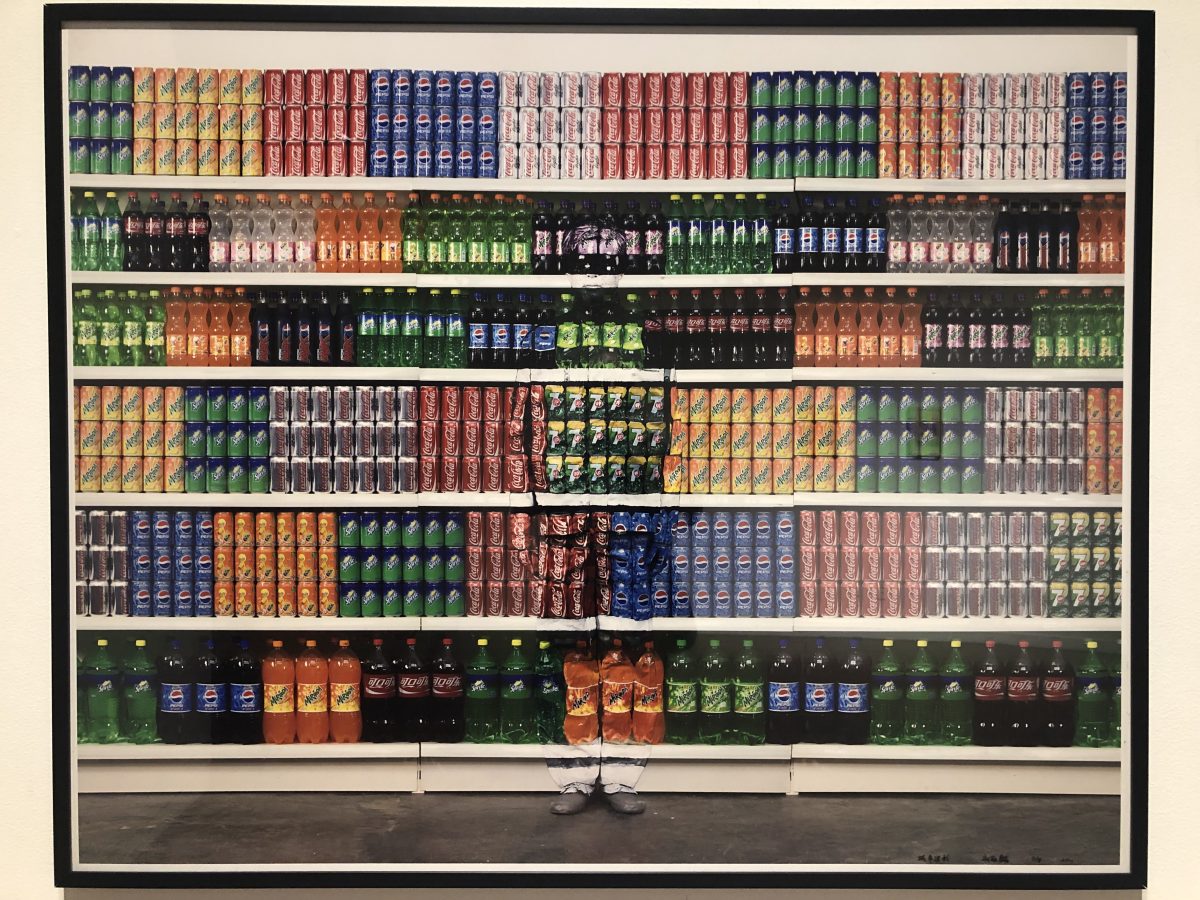 Among the most moving works here, Gregg Deal’s “The Space Where Souls Get Eaten No. 2,” transforms not a projected image of the artist, but rather one of the most commonplace and seemingly benign attributes of the dominant population, which it reveals to be a weapon of profound, destructive power. The plain and simple chair, elevated from its lowly place on the floor and attached to the wall, becomes defamiliarized, so that it can be seen for what it is: an instrument that divides humanity into two very unequal groups. There are the majority who stand, or squat, or sit on the earth, and then there are the few who take a seat on a chair, or cause a chair to be carried with them — a familiar part of the ritual whereby imperialists took control of those they intended to dominate. The addition of a braid cut from the head of a child, part of the process by which a student assumes a role in the new paradigm, breaks the viewer’s heart the way the chair aimed to break the children and the spirits of their families. 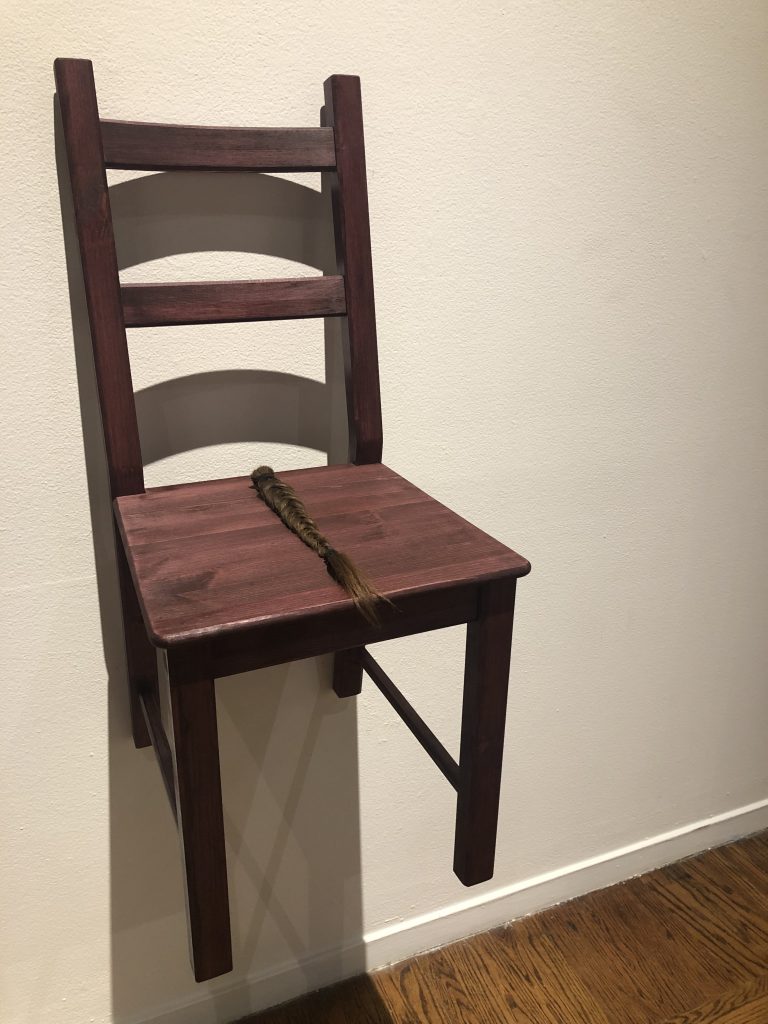 The concept of projection, in which a guilty party’s own sense of guilt or shame becomes easier to bear once they displace or project it onto others who may be blameless, or no worse than the individual doing the projecting, entered the public’s awareness some time in the 1960s. Now that it’s become a fundamental social construct, it’s hard to imagine how revolutionary it sounded then to say that much of what passes for judgment of inferior people is actually a projection of anxiety about the critic’s own flaws. The premise of this exhibition is that the familiar and generally dismissed child’s reply to a putdown — “I know you are, but what am I?” — actually had it right long before psychology did. The abused person knows the abuser is displacing something about themselves because they choose to name that particular, alleged flaw in order to displace it. The seismic cultural shift from battling for status among the privileged, those at the top, to the much larger struggle for admission to normal society by formerly excluded populations, and the reactionary efforts by those at the top to keep those others from liberating themselves, is at the core of today’s many social conflicts.

i know you are, but what am i? (De)Framing Identity and the Body, Utah Museum of Contemporary Art, Main Gallery, Salt Lake City, through Jan. 7, 2023

All photos by the author