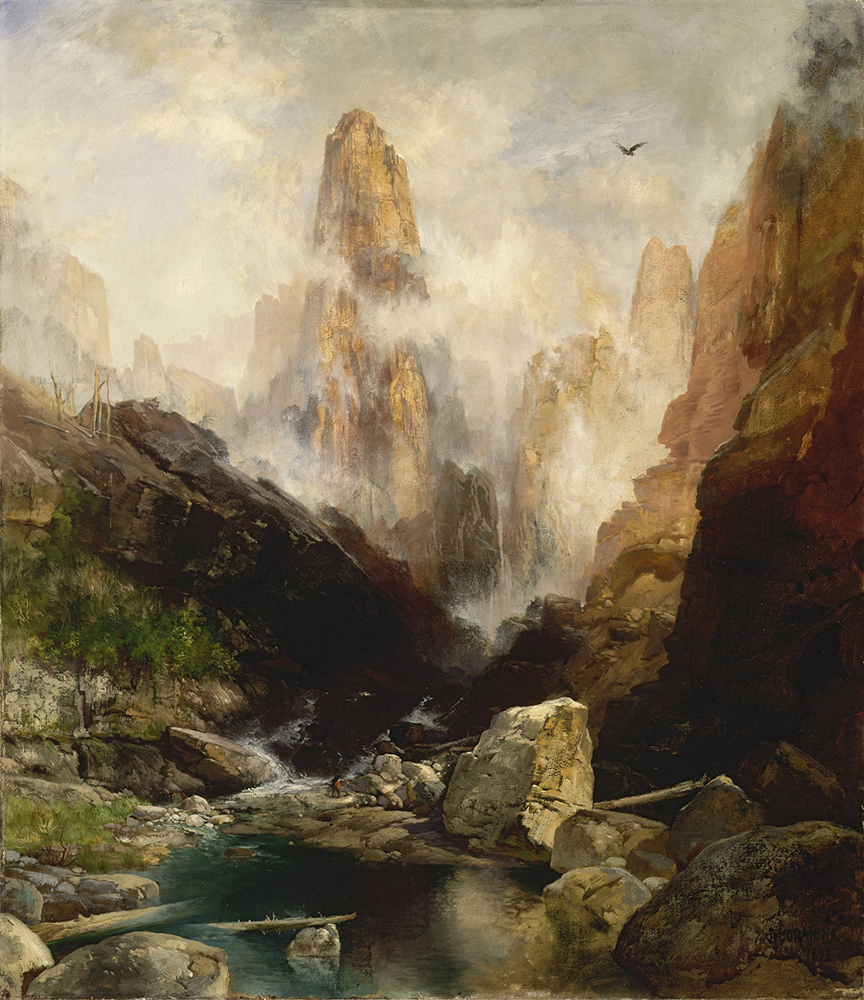 On October 25, the Utah Museum of Fine Arts (UMFA) unveiled four sensational paintings as part of a collaboration with the Smithsonian American Art Museum and Art Bridges, a foundation focused on increasing regional access to American art.

The UMFA has selected three paintings from the Smithsonian’s rich collection: an abstract painting by Washington Color School artist Alma Thomas, a picturesque landscape by Thomas Moran, and a cityscape by Georgia O’Keeffe. The museum also received a painting by Mexican muralist Diego Rivera on loan from the Art Bridges Foundation.

Earlier this year, the Smithsonian received a $2 million grant from Art Bridges and the Terra Foundation for a five-year collaboration with Western art museums. Art Bridges, a 501(c) (3) founded by Walmart heiress and philanthropist Alice Walton, is a foundation dedicated to sharing museum-quality artworks with institutions throughout the country. Art Bridges works to…”create and fund exhibitions, programs, evaluation, and new thinking about sharing works of art,” according to their website.

As the grant recipient, the Smithsonian American Art Museum (SAAM), allowed each partner to select notable works from the Smithsonian’s collection for display in their regional institutions. In addition to UMFA, the cohort, known collectively as the American West Consortium, includes the Boise Art Museum, the Jordan Schnitzer Museum (Eugene, Oregon), the Nevada Museum of Art (Reno), and the Whatcom Museum (Bellingham, Washington). The collaboration exists in two stages, beginning with the selections by the American West Consortium and culminating in a major exhibition co-curated by all the participating institutions, which will travel to each museum and close at the SAAM in 2023.

The concept is simple but powerful: draw from art rich institutions such as SAAM and transfer to what Stephanie Stebich, executive director of SAAM, calls “catalyst museums.” To Stebich, sharing is imperative for an institution that receives 60% of its budget from taxpayer dollars. The selection of Western art museums was due in part, to the massive population growth happening in the area. “I sent my curators on a grand Western mission,” says Stebich. “The UMFA stands out as a great champion of art and education.” she says, highlighting UMFA Executive Director Gretchen Dietrich’s role on the Art Bridges advisory board. “I’d like to think the works will return to D.C. with even more information than we had about them before. These paintings are, in their own way, teaching us about what it means to be an American,” she says.

Nestled within the museum’s permanent collection galleries, the works are on display for a full calendar year. While the works bring big-named artists to the museum, the institutional partnership also hopes to shed light on the treasures within UMFA’s permanent collection. “On average museums typically only display 3% of their collections,” according to Whitney Tassie, the UMFA’s Senior Curator of Modern and Contemporary Art. “Every department at the museum had some hand in figuring out where to place the new works on loan and how to use them to highlight what’s already in the collection,” she notes. “What’s exciting is that these new paintings give us a reason to pull from the extensive collection we already have.”

Notably, the three Smithsonian works all encompass distinct pictorial approaches to landscape painting. Executed over an 80-year span, the works range from picturesque landscape to modernist abstraction. Additionally, each configure their subjects vertically, challenging art historical tradition. To Tassie, their verticality subverts expectations by creating a “dizzying and dynamic effect” on the viewer.

Thomas Moran’s, “Mist in Kanab Canyon, Utah,” 1892, situated in the museum’s American and regional art galleries, depicts a lush, expansive view of one of Utah’s geological treasures. Though Utah’s landscapes are stunning in their own right, Moran’s view was undoubtedly idealized, with its staggering mountains covered in thick mist and small figures navigating the water-covered valley below. Historians believe it’s unlikely Moran ever actually visited the site himself, though he probably hiked nearby. Importantly, Moran painted this work in his New York studio approximately 20 years after visiting the area, likely drawing from memory, sketches, and even other photographer’s images of the canyon itself. The colossal painting is decidedly larger than any Moran in the UMFA’s collection, and hearkens to a time in American pictorial history when Romantic landscape paintings were used to entice residents of the eastern United States to venture west. “This painting is iconic. We couldn’t pass up the opportunity to bring this Utah scene back home,” says Tassie. 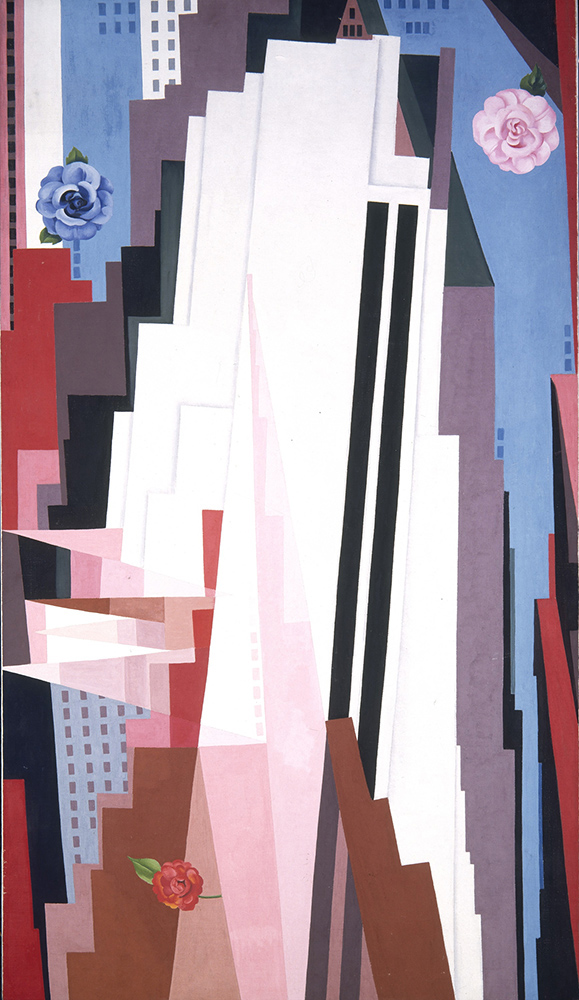 As a pillar of American modernism, Georgia O’Keeffe is perhaps best known for her exemplary floral paintings. Her work “Manhattan,” 1932, evidences the indelible influence of her time spent in both New York City and New Mexico. She began working on cityscapes around 1925, a few years before the opening of New York’s now quintessential Museum of Modern Art (MoMA). The work, which captures the energy and dynamism of New York City in an era of rapid growth and change, is considerably large in scale. The view, captured from her apartment window, depicts gargantuan skyscrapers in a geometrically abstract manner. While O’Keeffe’s style pays homage to the abstract trends of the preceding decades, she subversively uses a playful palette of pink and blues in the otherwise monochromatic cityscape. She also includes her iconic flowers, as by this time she had already experimented with paper flower making practices and created a bond with the American Southwest. She would later relocate to New Mexico after the death of her husband, famed photographer Alfred Stieglitz. It’s the influence of Stieglitz, and other male modernists, that is telling here. O’Keeffe’s flowers appear to float above the buildings as if pasted on them, reactionary to the sentiment of her male counterparts who discouraged women from painting seemingly masculine subjects such as cityscapes.

Surrounding the O’Keeffe are three smaller abstract works from an anonymous private collector. The works, geometric and colorful, are contemporaries of the O’Keeffe, and add a pop of colorful abstraction to the space in which they’re housed.

Located on the museum’s second floor, Alma Thomas’ acrylic wonder “Red Sunset, Old Pond Concerto,” 1972, is not to be missed. The large, abstract painting showcases vertically configured layers of red, blue, and green brush strokes, electrifying in their pulsating and simultaneous recession and protrusion into space. The work’s ability to convey spatial depth is rendered all the more relevant by its musical title, as the rhythmic quality of the piece is immediately palpable. Although a clear master in abstraction, Thomas is undoubtedly the least well known of the four painters. As a woman of color who began her painting career at 65, Thomas’ membership in the Washington Color School has been decidedly underappreciated until recently. Thankfully, her profile has risen steadily, consistent with a national trend of acknowledging viable, yet seemingly overlooked members of notable modern art movements. 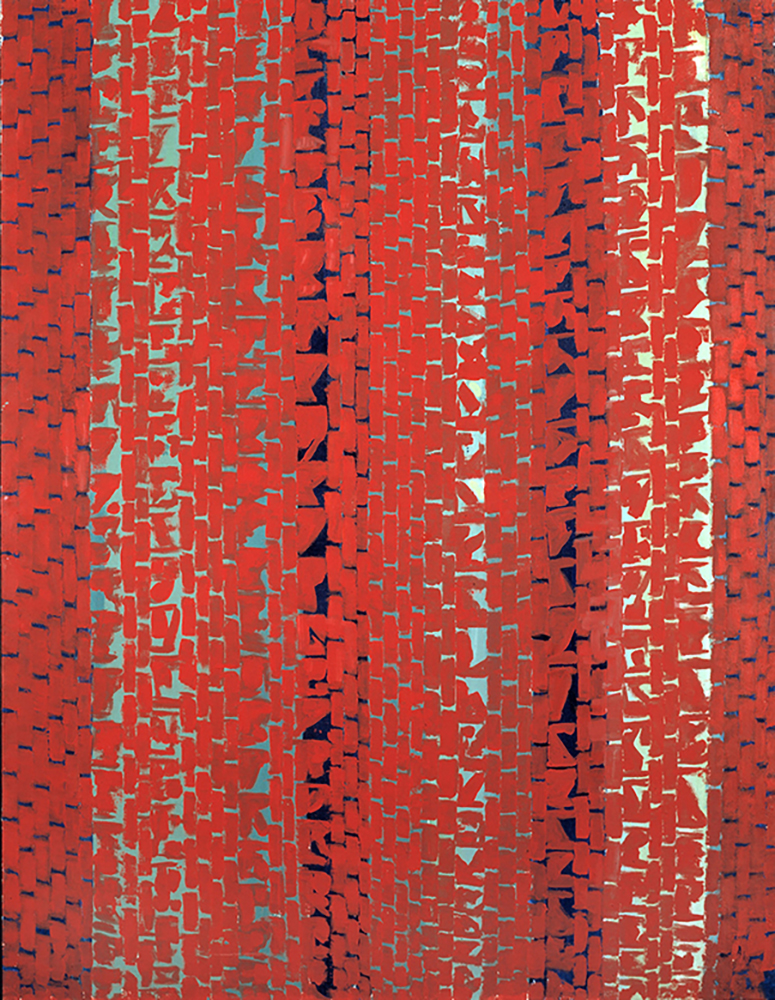 As the most notable of the famed Mexican muralists, Diego Rivera’s work became widely known through his celebrated commissions throughout Europe, the United States, and his native Mexico.  His painting “La oftrenda,” 1931, depicts a group of figures, surrounded by a swarming array of green foliage, erecting an altar for the dead. This ritual, associated with the Mexican holiday Dia de los Muertos (Day of the Dead), is evidenced by the traditional marigold cut-paper wreath draped over cacti in the right corner of the painting and the items adorning the small altar at the painting’s center. The figures, seated in a prayer position, gaze observantly toward a standing figure whose back faces the viewer. The painting’s circular emphasis mimics the dynamic movement of his monumental murals. The painting will show in partnership with Artes de Mexico en Utah, a nonprofit dedicated to increasing access and celebrating the unique contributions of Salt Lake City’s Latin American population. As part of the collaboration, the museum will host a Dia de los Muertos celebration for the public on November 2nd. More information can be found here.

While the works give art-lovers an excuse to see “big-name” artists whose work may be absent from regional collections, they also invite us to appreciate the diversity of artworks the UMFA has been nurturing since its inception. As museums across the country increasingly utilize technology to create greater art access and interaction, there’s simply no replacing the act of physically interacting with artworks. While this presents challenges for certain geographical areas, partnerships such as this highlight the exciting possibilities of a more democratic and interactive art consumption model. 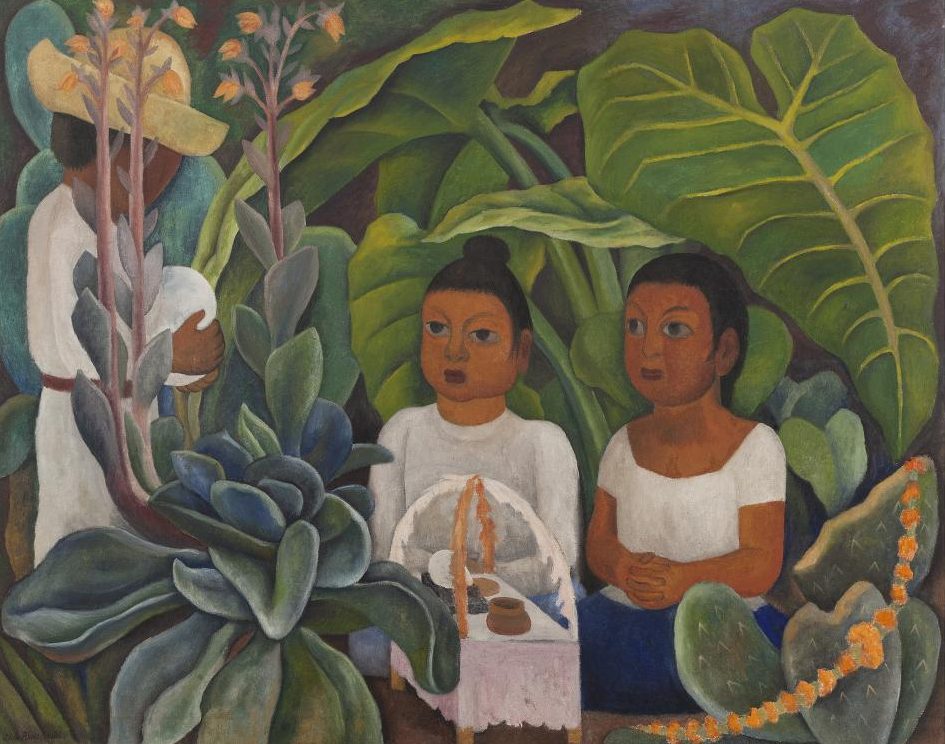 All four works will be on display in the UMFA galleries through Oct. 4, 2020. The UMFA will host a number of public programs associated with this partnership. For a full list of events, click here.