When Frank Sanguinetti, former director of the Utah Museum of Fine Arts, introduced the public to the museum’s new building in 2001, a few scratched their heads. The “guava” color of the walls might take some getting used to, they seemed to mumble. In the upper galleries, where paintings and sculpture took up much of the wall space, the color seemed manageable. But in the soaring heights of the Great Hall, it was simply overwhelming. How could any installation compete.

And indeed, over the years the exhibits installed there have achieved mixed results. Paintings can seem dwarfed by the size of the room, which is why the museum chose to go huge with its Brian Kershisnik exhibit in 2007. If the palette of an installation is too muted, as in the case of the Hyunmee Lee exhibit in 2006, the works can disappear. Blues seem to do well with the peach color of the walls, as suggested by the recent Dale Nichols exhibit. And works with a strong visual presence, that read well from a distance, appear to hold the space the best. The most current installation in the Great Hall satisfies both these demands, and does so with a single work.

Created in 1976, Lawrence Weiner’s “BENT TO A STRAIGHT AND NARROW AT A POINT OF PASSAGE” is a conceptual work that consists of that very phrase, in a variety of possible iterations. In the case of the UMFA’s Great Hall, the work has been created in six-foot tall blue capital letters and installed across three walls of the space.

“At first glance, the phrase is seemingly simple and direct,” says poet, critic, and University of Utah English professor Craig Dworkin, who has studied and written extensively about the art of this period. “But then one realizes how open it is to grammatical possibilities and suggestive ambiguities. ‘Narrow’ and ‘straight’ suggest themselves as adjectives, though they seem to operate as nouns, evoking ‘straits’ and ‘narrows’ in the sense of waterways, which would be nautical ‘points of passage.’ However, they also of course recall the idiomatic ‘straight and narrow,’ so a whole social and political resonance emerges from an ostensibly objective phrase about linear geometry.”

The UMFA purchased the work in 2011 with funds from the Phyllis Cannon Wattis Endowment for Twentieth Century Art. It will be on display in the Great Hall through mid-2014.

A more recent purchase, and a work also currently on display at the museum is “Periphery” by Lynette Yiadom-Boakyeone. Yiadom-Boakyeone’s work is being feature in the museum’s current salt series (see our article here), and the announcement of the purchase comes on the tail of two prestigious accolades for the British artist: she has been shortlisted for Britain’s Turner Prize, and her work was selected for inclusion in the 55th International Art Exhibition at the Venice Biennale. 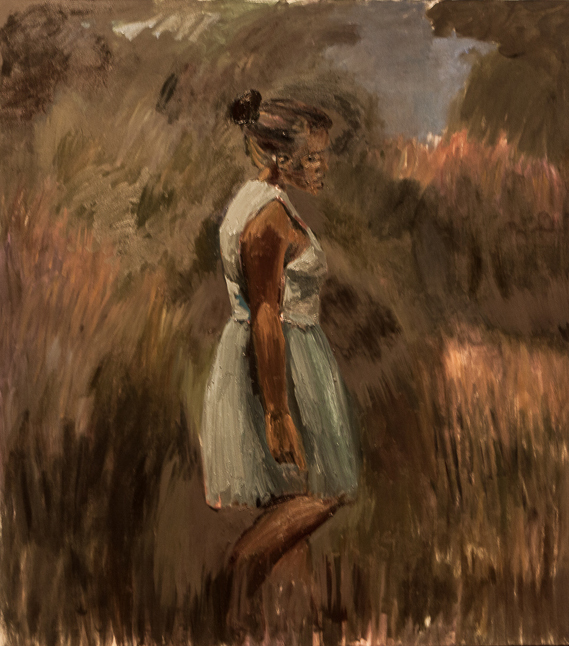 Periphery by Lynette Yiadom-Boakye, newly purchased by the Utah Museum of Fine Arts

In her paintings, the UMFA says in their announcement about the purchase, Yiadom-Boakyeone situates “invented black characters in timeless, placeless settings that invite the viewer to complete the suggested narrative. Made with a palette and brushwork reminiscent of traditional Western portraiture, these works consider the role of the black figure in the art historical canon, especially modernism’s flawed perceptions of race.”

salt 7: Lynette Yiadom-Boakye is on display at the Utah Museum of Fine Arts through June 23rd.