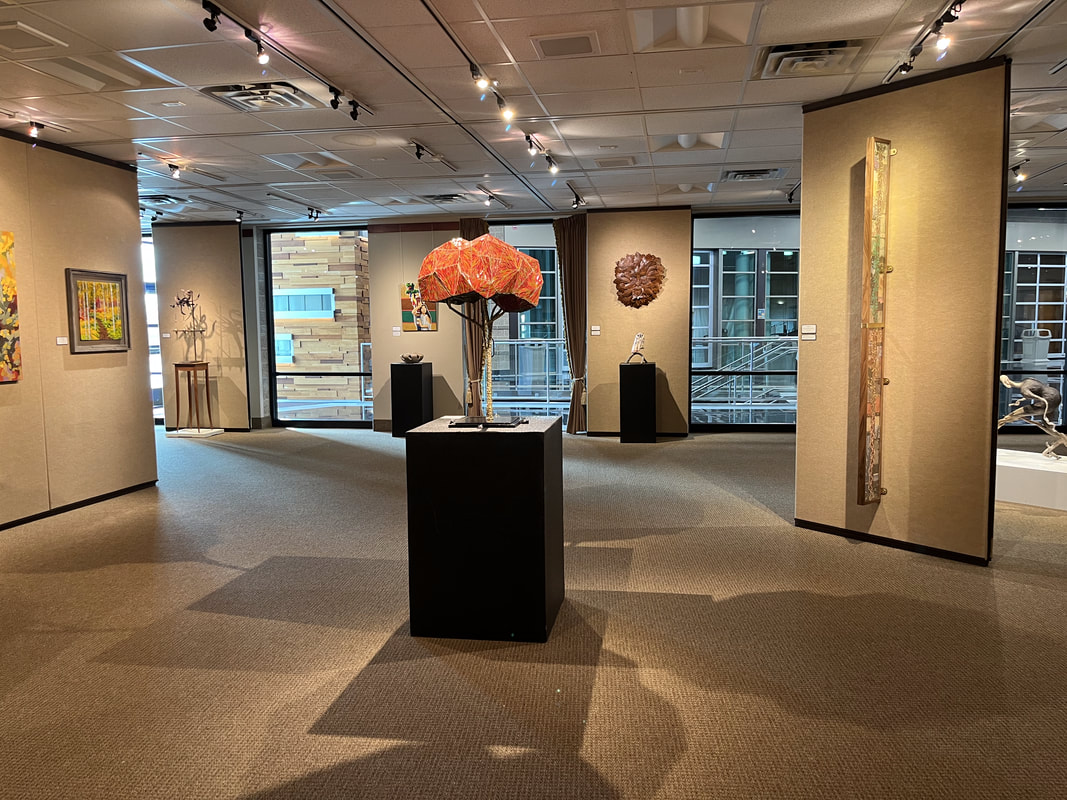 When Mary Hutchings arrived at the Utah Cultural Celebration Center on March 4th to deliver a handmade landscape she’d been invited to show, titled “The Banks of the Susquehanna River,” the gallery was full of artists dropping off their own pieces, which would eventually number more than 50 works that display the depth, skill, and range of Utah’s artists. Someone in the midst of all that activity thought they’d be helpful by redirecting her to another exhibit, one of several showing simultaneously in the sprawling complex, of photographic landscapes like hers. Hutchings was initially confused, then bemused by their mistake: her scene, along a peaceful stretch of the beloved river as it flows through an old growth forest, does look almost like a photograph, though more vivid and eye-pleasing than any mere camera could produce. Beneath its powerful sense of place, in fact, it’s made of cotton: batik-dyed fabrics meticulously sewn together using quilting techniques.

When I spoke to Hutchings at the opening, she seemed a little overwhelmed by her surroundings: paintings, sculpture, an exotic crowd. “I’m just a grandmother,” she said when I praised her achievement. But when I pointed to the astonishing tangle of roots and ground cover at the base of the nearest trees, her eyes lit up and she told me how she’d finished that part, then had to call a friend to share her exultation, telling her excitedly, “I made dirt!” 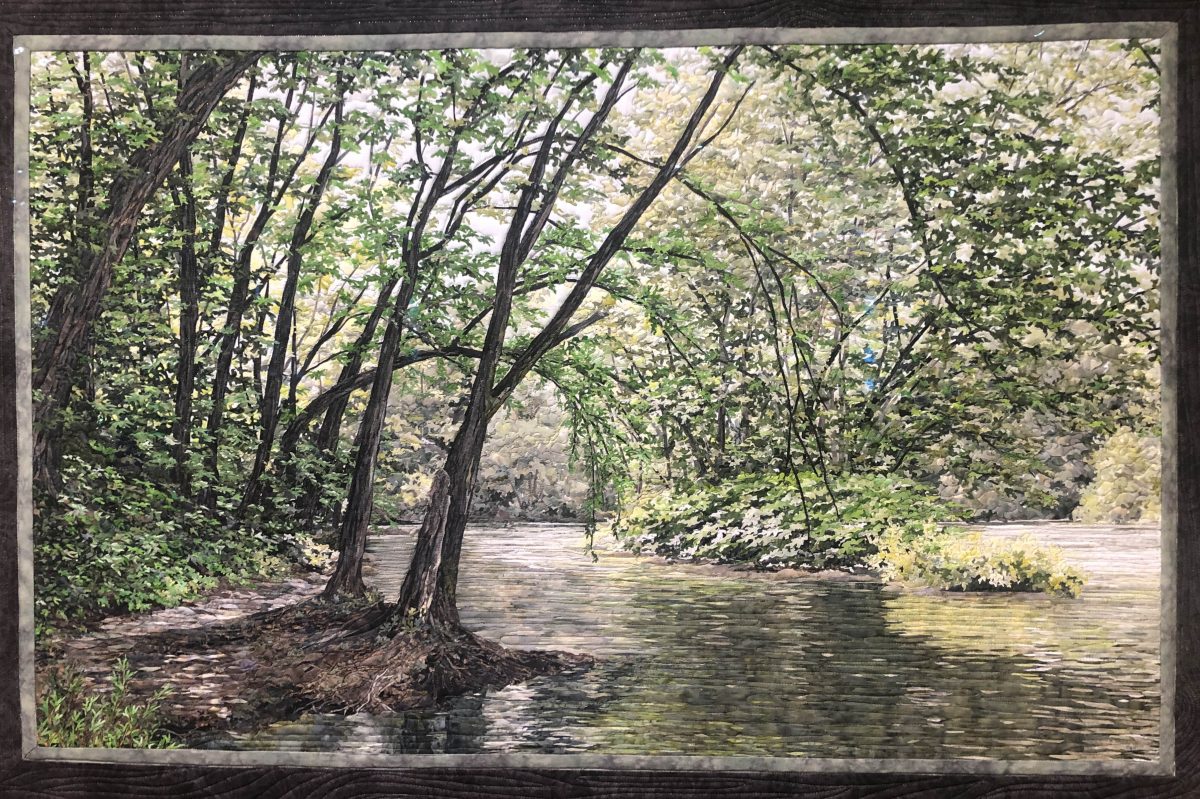 Mary Hutchings’ “The Banks of the Susquehanna River”

Tree Stories: A Breath of Fresh Air, which is just one of West Valley Arts’ current exhibitions, includes many examples besides Hutchings’ of what the addition of depth can contribute to a visually satisfying work of art. There are three-dimensional works present, of course, including eight sculptures and five reliefs. But they speak to other aesthetics, the former asking viewers to walk around them to see how they change with shifting perspectives, while the latter address the senses of kinesthesia and texture through vision rather than touch. In these that depart from the traditional way into two-dimensional art, where we stand before it and imagine we are entering an illusionary scene, these artists and their works abandon the dependable visual hints that lock in a single point of view and replace it with an interior that works like the outside of a sculpture: one that responds in a livelier way, even to small and subtle movements by the viewer.

The clearest example is Wendy Wischer’s “Wooded III,” an upright, rectangular wooden box, filled with roots made of paper — which is generally made from trees — that are seen in three full dimensions. It’s the invisible part of a tree, as if we could see it and not destroy it at the same time, with the above-ground and underground portions represented in reverse, wherein what should be open air is solid, while what lies below has become visible. Trees come in countless varieties, but their roots are a universal fact of life. 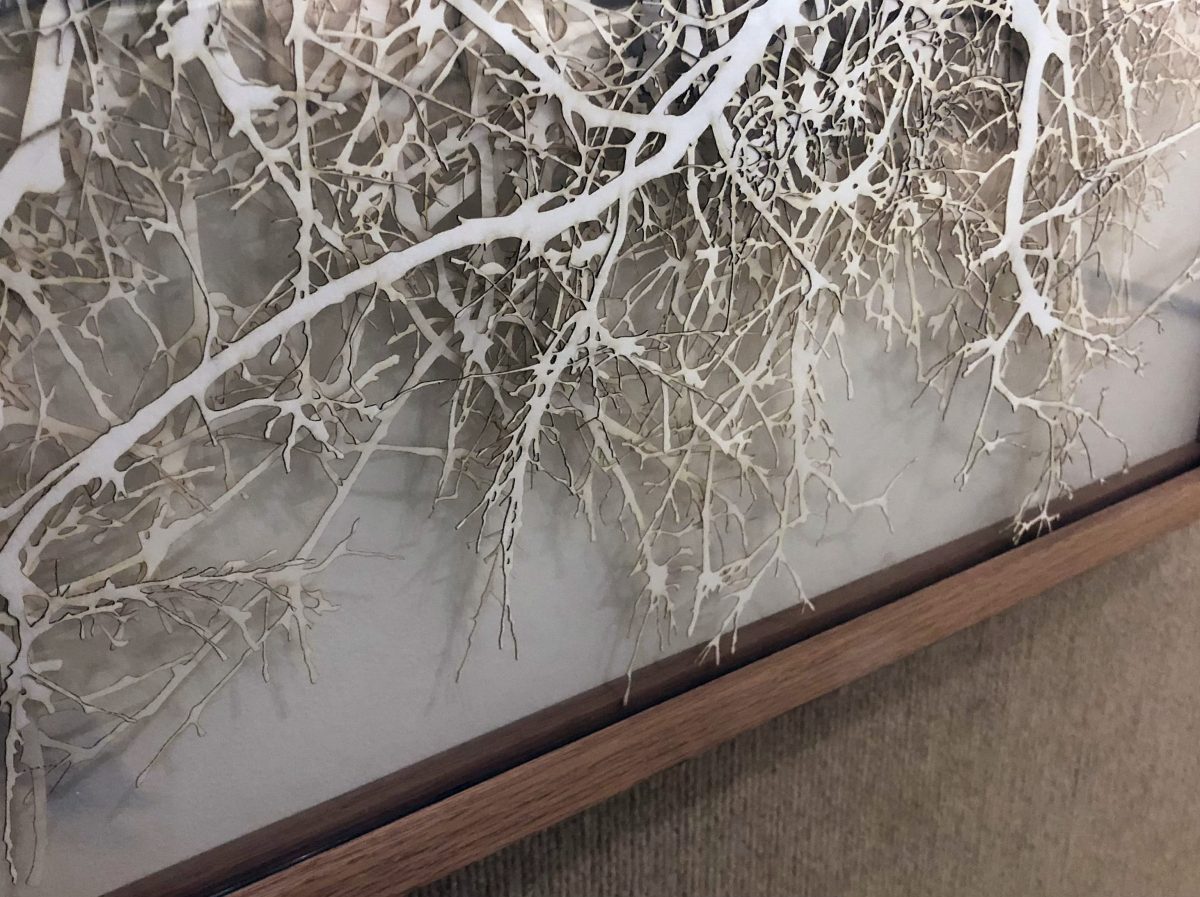 A subtler, but more pictorial example was produced when Barbara Busche meticulously arranged frit, or crushed glass, in a kiln, then melted, or “fused” it together to make “A Mindful Journey.” In the eye of the camera, Hadley Rampton’s oil painting, “Flicker,” looks like an enlarged close up detail from “A Mindful Journey,” and the two have been hung together as if to invite the comparison. But where Rampton’s image flirts with illusions of space and light —especially light — while remaining flat, Busche’s trees, though untouchably cased in glass, actually stand in front of their surroundings and apart from each other, and so invite the mind to follow where only the eye can truly go: into the forest.

And speaking of forests, most of the artists chose a lone tree as a subject, perhaps mindful of the difficulty of “seeing the forest for the trees.” The one exception, who offers not a scene set in a forest, but the entire forest, is Sandy Brunvand, whose “The Scent of Memories” captures not only the look of her childhood forest, but its magical mood. 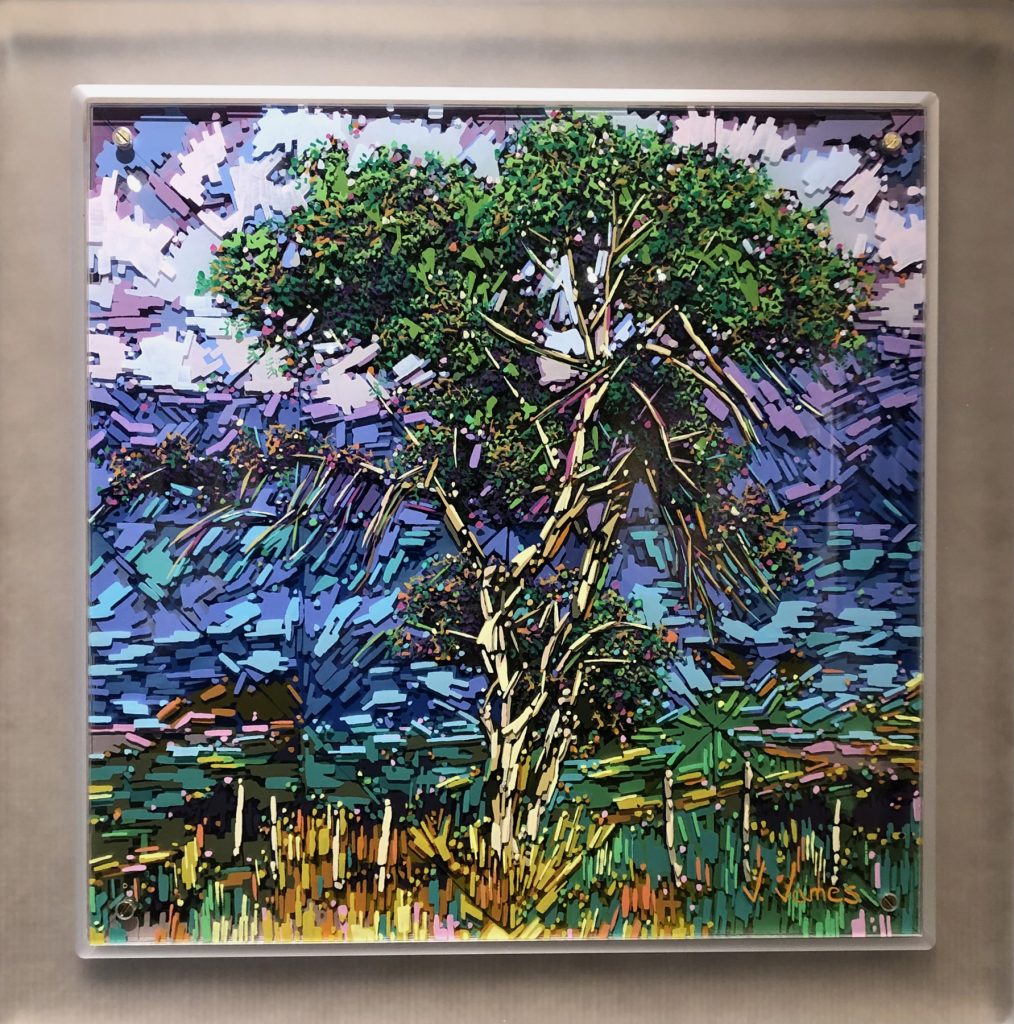 Janell James’ “Where the Sea Used to Be”

Another variation on actual depth is seen in Janell James’ semi-abstract, almost cubist representation of land, sky, and water. Her rhythmic, rhyming title, “Where the Sea Used to Be,” invokes time and seems to set her deeply geometric, variegated colors in motion. While her painted layers of acrylic do not allow the eye to pass between them, they cast shadows onto each other, just as they would in a living tree, bringing the scene to scintillating life.

There are other examples. Host artist Dan Cummings’s massive “First Tree,” along with its ocean, island, fountain, and waterfall are, like Prospero’s island, all made entirely of air: they are the space left when he sand-carved into the back of a slab of glass, while what looks like air surrounding them is solid silica. His fellow curator, Susan Klinger, created an abstract, fundamental expression of “tree” — an upright form, its surface texture cast from Maple Bark and covered in gold to represent how priceless trees are. She says that the inversion of the tree’s texture reminds her how living things trade oxygen and carbon dioxide in an exchange that makes life possible for both trees and us. Travis Tanner’s “Four Seasons” backs together two tall, flat collages, each evocative of two seasons, but then projects them out into the room so they summon yet another of trees’ iconic qualities: a vertical, environmental envelope. 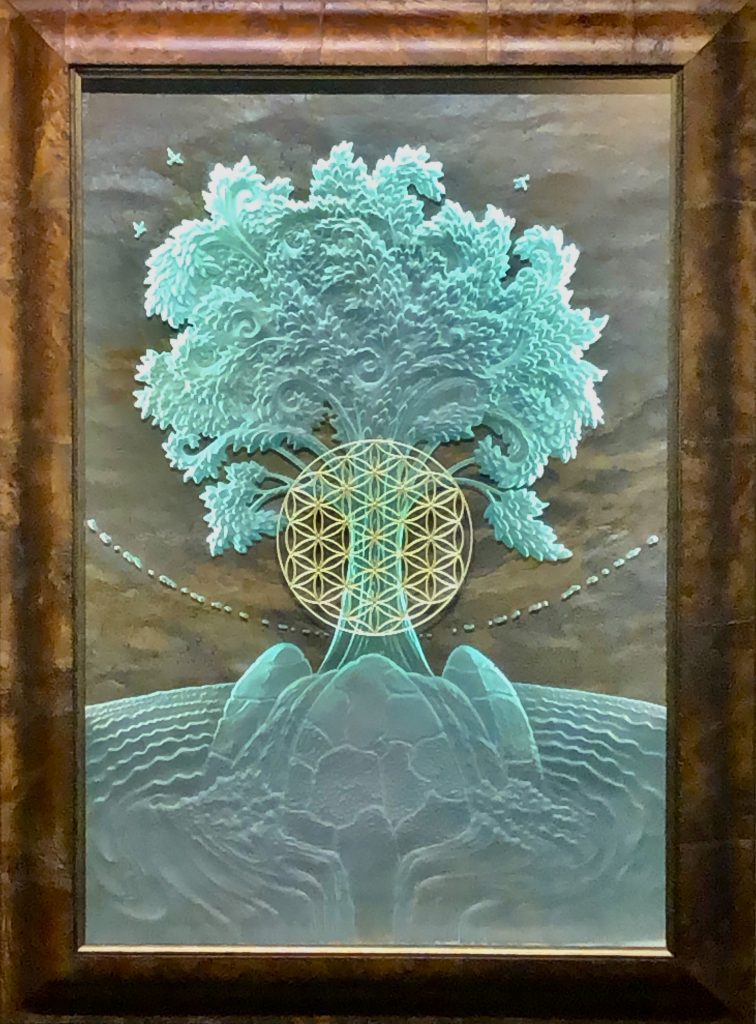 Among these innovative, expressive uses of space, other works break through in equally poignant ways. Frank McEntire has a unique capacity to conjure the limitless presence of nature while, at the same time, recalling to mind the frail, finite senses through which we struggle to grasp the infinite — represented in “Four Winds” by antiquated laboratory apparatus. Kathleen Peterson’s beloved figures of women derive from cultures all over the world, often shown in their characteristic dress and lifestyles, but then she presents a tree as the aesthetic equivalent of a person. In “Grounded,” she meditates on the rooted, geotropic intelligence of trees. An entirely other way of measuring depth is seen in the circular “Sunset” of Radford Cuch, a Norther Ute, who combines pen & ink with beadwork into a combination of landscape and mind-scape. Another exercise in dividing the circle without breaking it occurs in Eruera “Ed” Napia’s “Rimurium (Dancing Seaweed),” a necessarily permeable vessel that holds a heartbreaking story and a mother’s love.

The Utah Cultural Celebration Center has foregrounded trees pretty much throughout its 15-year history. They used to ask an artist to curate a show on the theme in late Fall, but after the selection of West Valley Arts as the local arts agency for Utah Parks and Recreation, the schedule changed. This year, Dan Cummings was given this date in Spring. Assisting him was Susan Klinker, the Educational Program Manager and also an artist. She and Michael Christensen, Visual and Performing Arts Manager, shared the heavy lifting that goes into such a large exhibition. Their innovative approach to connecting artists and the public includes the mini-statements by the artists that accompany each displayed art work. 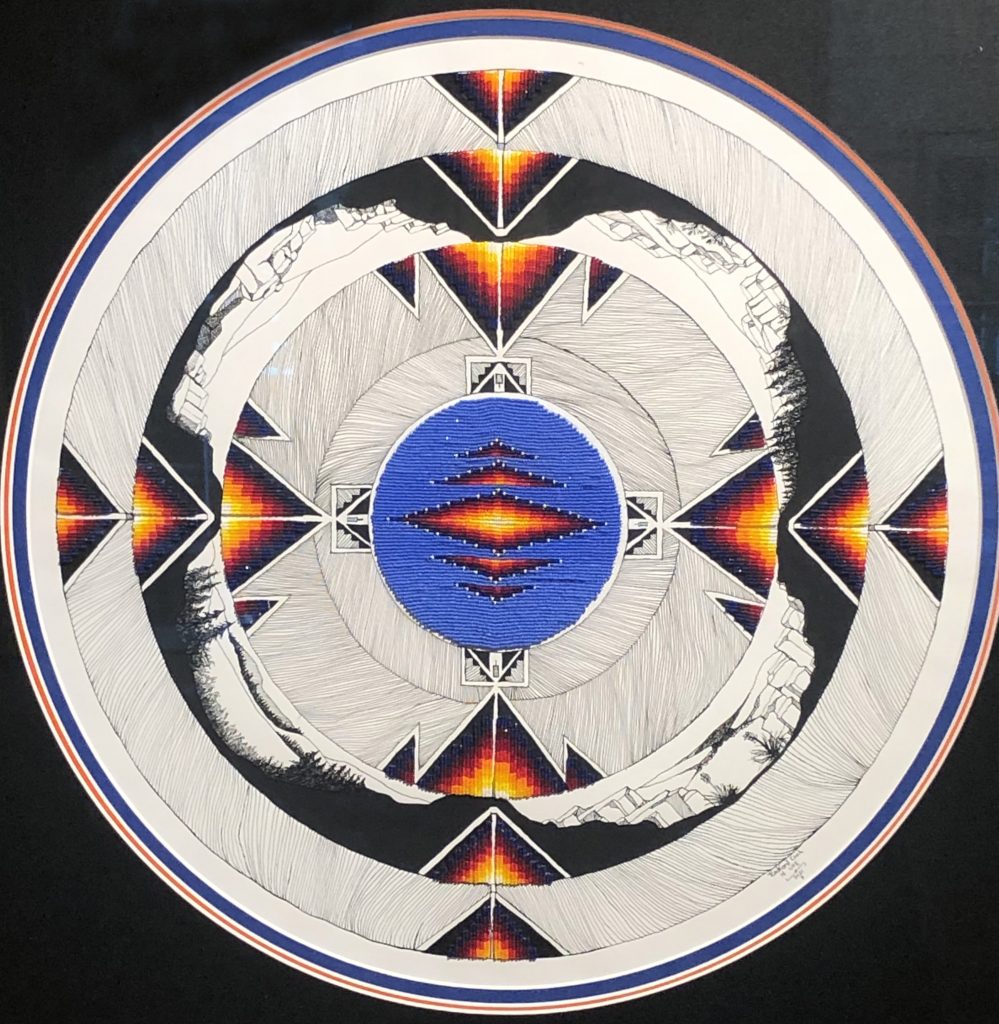