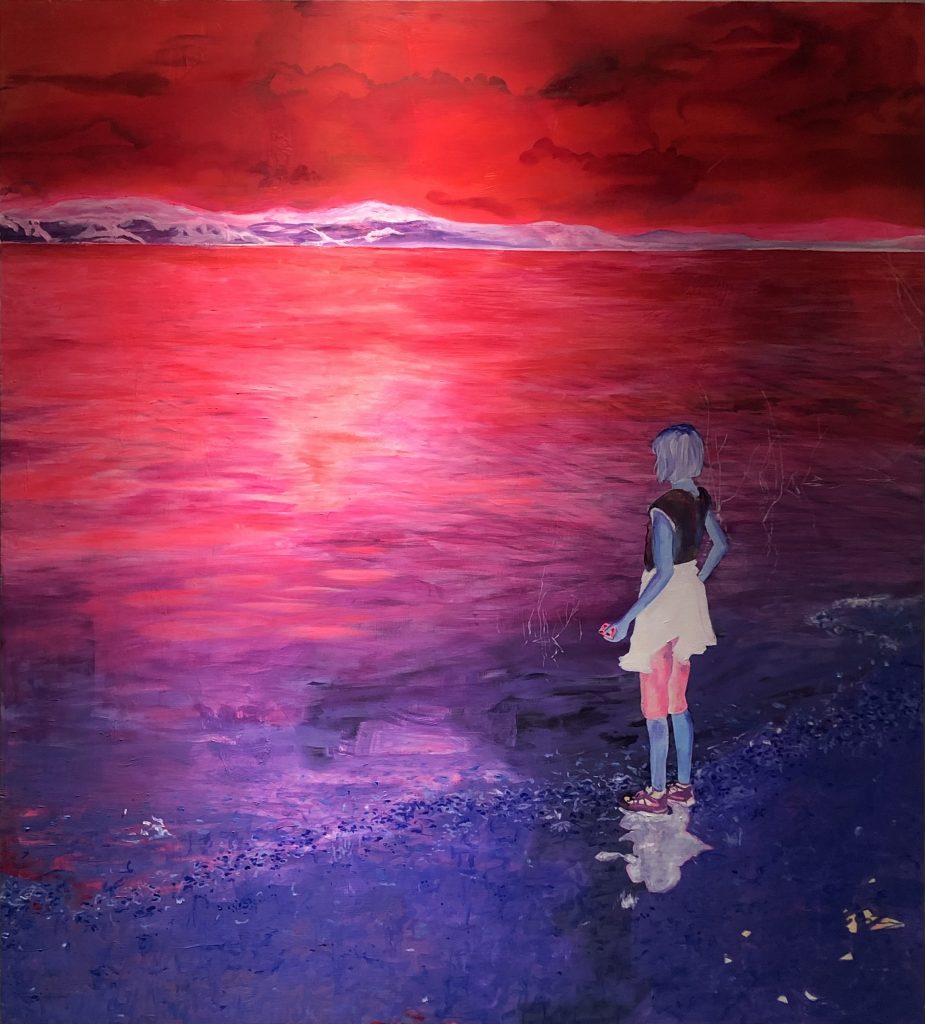 Holly Hind, “Pink Lake (Where Will She Go?)”

In a brilliantly luminous and subtly surreal oil painting, titled “Pink Lake (Where Will She Go?),” Holly Hind places a young lady, or perhaps a child, on the near shore of a sizable lake, under a livid red sky — perhaps the sunset to end all sunsets — the reflections of which stain the lake a lurid red-pink. Her shirt and shoes are also red, and she appears to be wearing a white shirt or jacket tied around her waist. In her hand she holds a colorful but indistinct object that might be a cell phone she was just using to take a photo of what she sees. Her legs are pink, as it from reflected light, but her arms, neck, and hair are pale blue, as are the ground beneath her and the distant shore. Her reflection in the skin of water she stands on is an eerie white. She has her back to us and looks out over the lake. It’s a scene one feels unable to turn away from or forget.

A couple of possibilities come to mind, principle among them being an apocalyptic vision. Young people today are not alone in responding to the possibility that there may be no future, but they have every reason to resent the possibility more than those of us who have fewer years remaining. Among the land-related questions it may raise is the fate not only of Great Salt Lake, but of water throughout the West and, indeed, worldwide. Curators Rocio Vasquez Cisneros and Alejandra Ramos have chosen to let the works speak for themselves, rather than impose their vision, which is an approach that might well be taken more often. The 17 works by seven women they have chosen achieve high standards of artistry and accessibility.

Take, for example, Erica Diane Monson, who has lately been thinking about stigmata, the phenomenon, usually among devoutly religious individuals, who spontaneously develop bleeding and even wounds that mimic those of the crucified Christ. In “These Are My Own Hands,” a black-and-white painting, and a color version titled “I Don’t Know Who Hears My Prayers, But the Earth Trembles,” she explores her thoughts about the physiological, cultural, and spiritual significance of these events, which range through such disturbing experiences as ecstasy, hysteria, and self-harm, only to touch on more commonplace events like menstruation and pregnancy. In the color version, a string of pink beads laces through the wounds, potentially binding the praying hands. 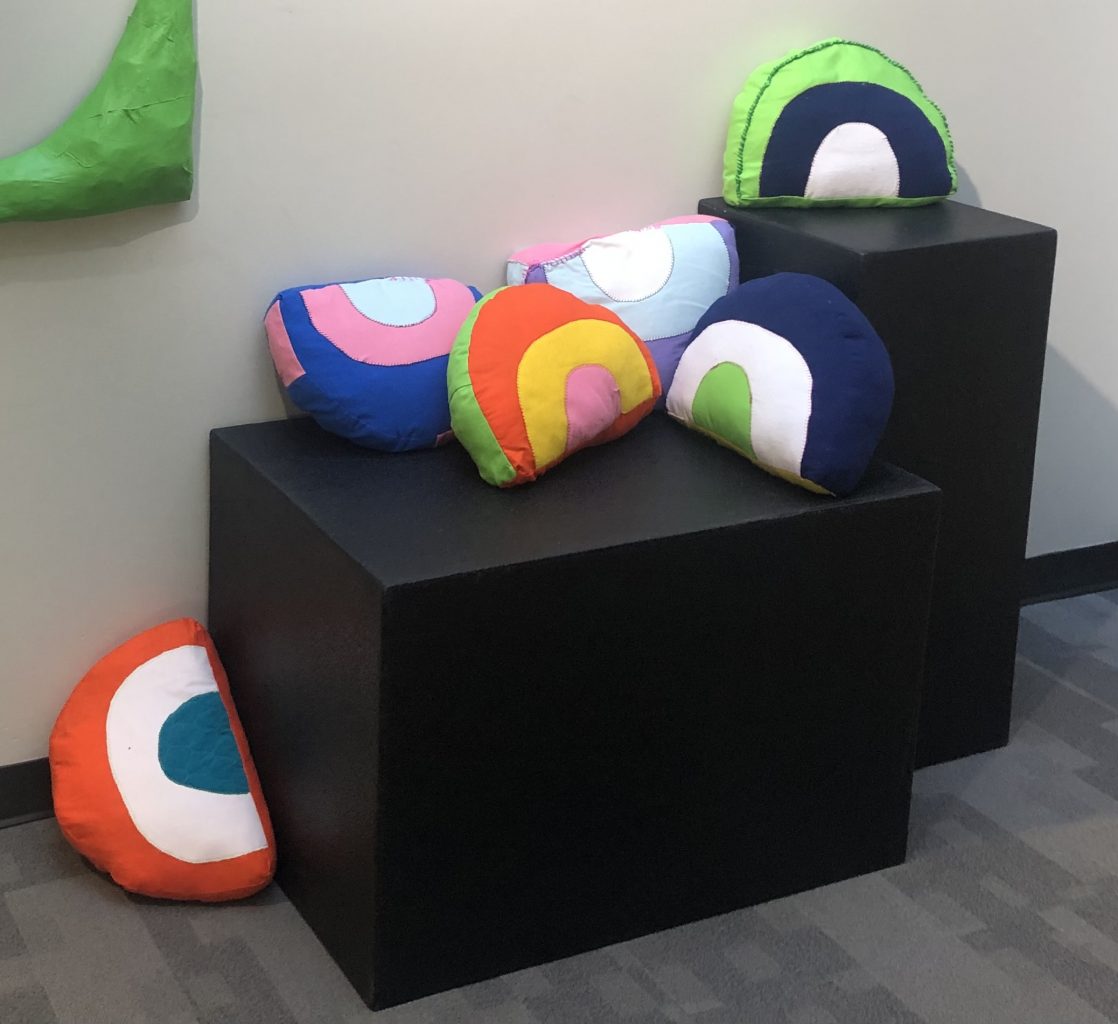 “Womb” is also the subject of a set of six colorful, semi-circular, pillow-like textiles by Sadie Bingham, who reminds viewers that a common convention associates any comfortable accommodation with an invocation of this essentially feminine connection. Hands also figure prominently, with fully half the artists foregrounding them in some way. In “Bordado,” (embroidery, for the language impaired), curator Cisneros has drawn a pair of hands holding the title hoop and a piece of blank fabric — the needle and threat are also omitted — while the background is actually embroidered with a likely wallpaper pattern in red thread. It’s worth noting here that some of the famous Nazca lines, ancient and mysterious land art found on the coastal Peruvian plain, have recently been related to equally old weaving patterns that have survived, buried in the dry desert earth.

One of the joys of art today is the increase in media and subjects introduced and appreciated by a wider population, both of artists and audiences. (One of the pieces here, by Eleanor Tribe, is made of paper pulp.) The curators of Body / Land are to be commended for choosing a venue where their work is accepted on its own terms and shown where it can be fully appreciated. The connection between the body and the land on which it dwells has only recently entered the mainstream, but it’s been a well-kept secret elsewhere for centuries. 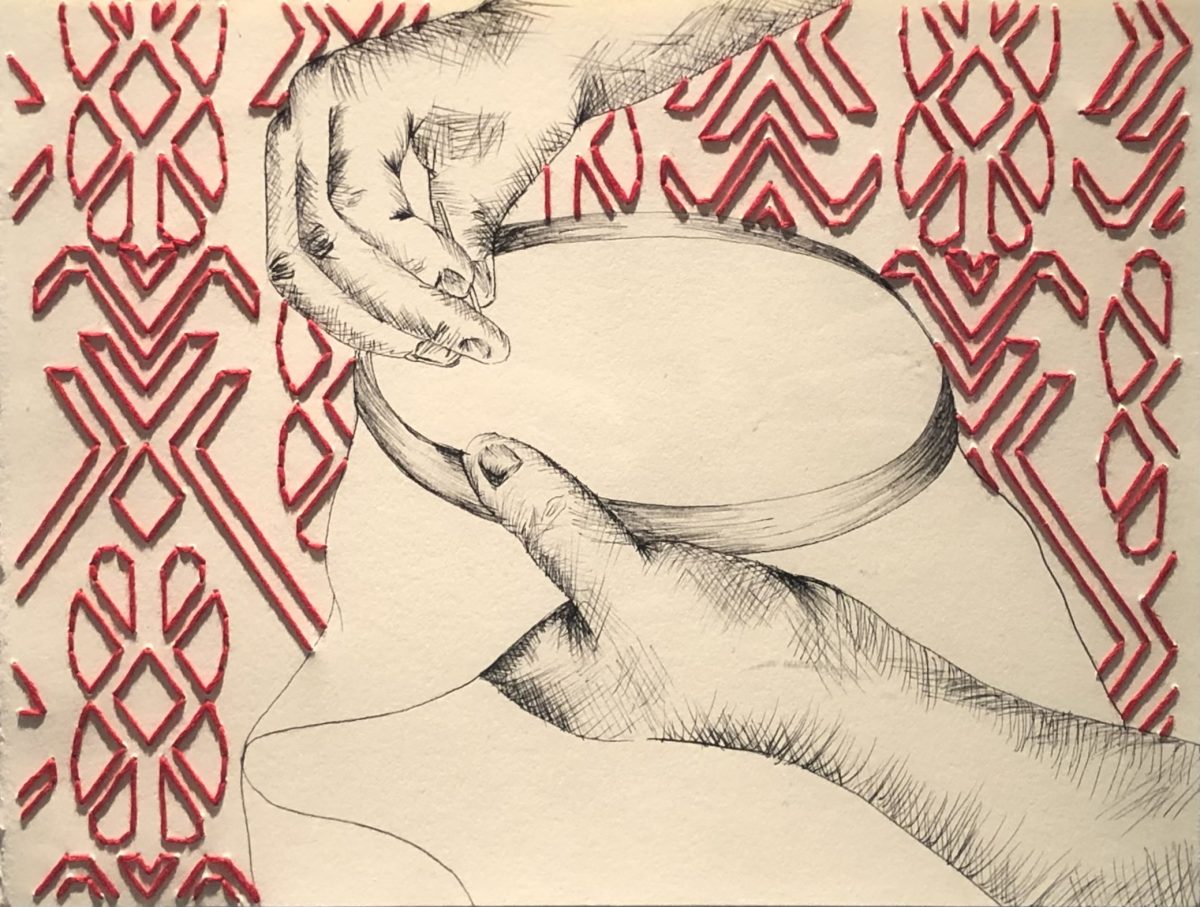 Another secret, the Plaza Level Gallery, downstairs at West Valley’s Utah Cultural Celebration Center, is an open space, ideal for casual encounters or just sitting while reading or studying. It’s one of at least half a dozen places around the building where various works of art can be seen whenever the Center is open. Until recently, the whole complex suffered undeservedly from its isolation, but proximity to the Jordan River Trail is no longer its only accidental attractor. A memorial to Utahns killed in the 20th century’s wars has opened across the street, even as its landscaping continues. A promising city park is under construction between the UCCC and 3300 South, and a different kind of park, one for business and industry, is being built as well. Once again, it seems, art serves to inspire the renewal of a whole neighborhood.