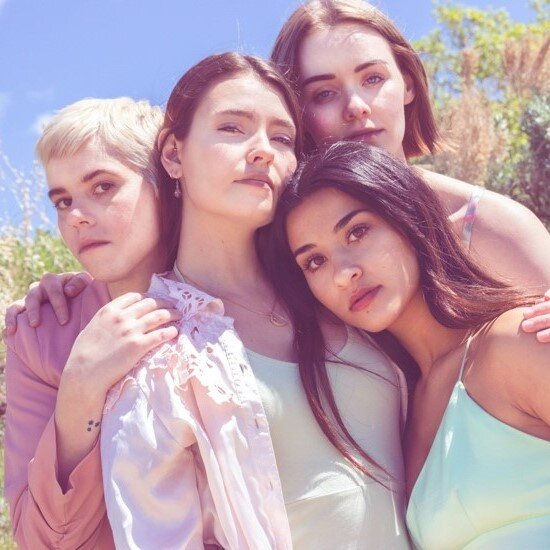 Before I ever saw Dishy Collective’s performance Fine China, I saw their instagram campaign, which was prodigious. I hate social media, but I keep it on my phone because it seems like I need it to keep up with what’s happening. When I started editing this journal (for the second time) I was still living in New York and so I read reviews, looked at Instagram, and talked with friends to keep abreast of the scene I was covering from afar.

Since then, we’ve all been through the great distancing event of the pandemic and we take it for granted, perhaps more than ever, that we need to keep up. So I’ve been keeping up with the women of Dishy Collective, who I’ve never met, for several months now. I’m not sure which set of images will last longer in my memory, the forty or so masked minutes that I spent watching them in one of the abandoned storefronts of the Gateway, or the weeks of pausing over diaphanous images of these four dancers: hair trailing in the foothills, taking tea in pastel colored dress, snatches of phrasework meant to stall a scrolling thumb.

My experience of Cloud Library by the Free Pool Collective, headed by Rae Luebbert and Cece Otto, was altogther different. I wouldn’t have known about Cloud Library at all if I hadn’t recieved a press release, although these two events are part of the same fringe festival. Cloud Library was presented as a website, mediated by the maze-like Mozilla Hubs app, which you might have experienced this last year through Queer Spectra’s virtual offerings. We were meant to enter on our solitary laptops and have some kind of virutal gallery stroll mixed with an embodied set of choose-your-own-adventure instructions that were supposed to dictate the order and context in which you, or your avatar, watched several dance videos. I liked the idea, but I found the experience cluncky, and I’ll admit that about five minutes in, I gave up and resolved to return later to the video compalation filed under the “technical difficulties” tab.

What worked and what didn’t work (for me) about these two experiences seemed to turn on the technology. Fine China was full of images of its dancers playing — I almost want to say “playing house” — in a series of self-consciously childish scenes: the fake tea, dress up games, a headress of fruit on Jorji Diaz Fadel. The most interesting of these involved a cryptic nursury rhyme, which devolved for one performer into a kind of manic episode from which her three comrades had to bring her down.

The problem throughout was that I didn’t know how to recieve any of this. The images on instagram felt designed to allure. “We are beautiful and young and doing things that hint at an inner strangeness without compromising the visual appeal,” they seemed to say. I have a feeling there was much more to these images, each of which I saw fleshed out on stage. I had the feeling that they had been carefully researched. But in the end they didn’t quite unfold into three dimensions to include the live audience.

There was one moment near the end of Fine China when Bailey Sill was losing control in the middle of a solo. It’s hard to describe, but there was something compelling about the struggle, legs buckling under her, somewhat desperately but without drama, as if they were following a different set of rules than her upper body and both were under some real if invisable stress. I realized as I was watching it that it was the first image I’d seen throughout the experience that didn’t look like it would work as a photograph. Consequently, it’s the one I remember the best, and days later, it’s the one I am still pondering.

Once I resigned myself to the fact that I was just going to watch Cloud Library straight through  — the screendance version is called 11 Walls in 7 Days — I quite enjoyed its seven vingettes. The play here revolved more around sensation than image. In Cece Otto’s section, we were locked in a car on a hot day, lost in an interminable commute somewhere along the Wasatch Front. In another, two performers shared the kinsethetic experiment of filling an apartment with maroon balloons. 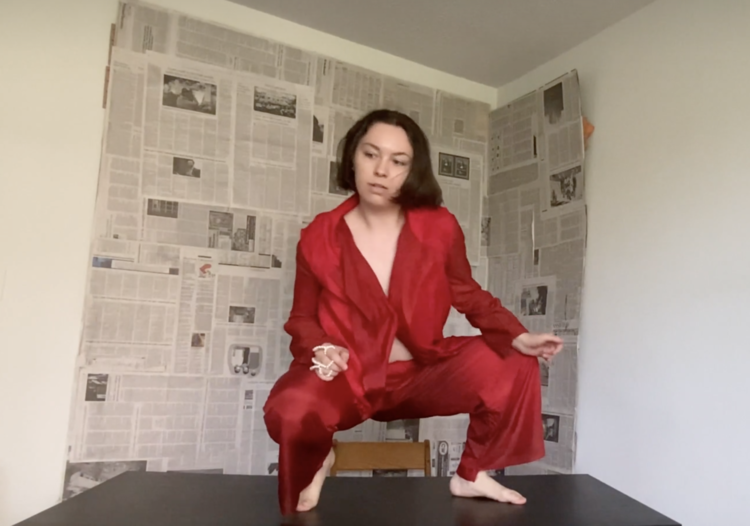 In my favorite, performer Faryn Kelly mixed explosive dancing with images of herself seeming to brood — dressed in red pajamas, reading a newspaper, eating pomagranites with chopsticks. Here was a confounding set of signifiers and one woman falling through them. They invited you to decode them even as they imploded on themselves in generative, metaphorically-suggestive play.

Sadly, as of August 7, the rest of the live events at the Fringe Festival have been cancelled due to a coronavirus infection. You can support the remaining virtual events here.