In last month’s edition of 15 Bytes, Kent Rigby asked “Where will all the young lions go?” referring to the recent closing of the Unknown Gallery and Kayo Gallery, both of which showed younger artists often outside of the mainstream art world. I have a partial answer, but my response is not a gallery, it’s a book. Well, really it’s a zine, but more on that later. A lot of the artists you might have seen at the aforementioned galleries find themselves wedged between the covers of Swinj Art’s newest publication, Swinj No.6.

Swinj Art is the creation of Salt Lake City’s Trent Call, who since 1998 has been publishing zines filled with the artwork of local artists. Call is the type of guy, I imagine, that would draw on just about anything, like his hand is on auto-pilot, furiously scribbling away while he goes about his daily tasks; so that I imagine doodles of his turning up on the kitchen counter as he stirs a bowl of pasta, in the marginalia of the magazines at his dentist’s office, or, if you weren’t paying attention very well, crawling up your arm as you sit to interview him (which is why I chose to shoot him a few email questions rather than drop in his studio).

All of this is part of my imagination. For the record, I have yet to come across one of his figures or comics in my dentist’s office; as far as I know, his counters are as clean and sterile as an operating table, and I have yet to be subjected to a free Call tattoo. But I don’t think my daydreams are far off because his art does seem to be everywhere, and he does seem willing to draw/paint on all kinds of surfaces. You’ve probably seen Call’s work, though you might not have known it. His work has been in the Main Street kiosks. If you’ve ever seen a poster for one of the Open Studios at Poor Yorick’s (another lamented closing) you’ll have noticed his unique graphic style that gave that den of heterogeneous artists a brand. Or you may have picked up a CD, seen a cover of Slug Magazine, attended an exhibition opening, bought a skateboard, — all visual forms that have come under the doodling hand of the artist.

Akin to Call’s desire to draw is his desire to publish, which began in 1998 with the publication of the first copy of Swinj. Call is pretty matter-of-fact about putting these things together, as if taking the time getting artwork (he mentions “arm-twisting” in the same breath as “getting artwork”), photocopying it, putting it in book form and distributing it locally is the most natural thing in the world. “I know all these amazing artists who have all this wonderful stuff,” he says, “so I may as well publish a collection. That’s what swinj has always been, a collection of my friends’ work . . . I’ve always wanted to make a book, why not, I like making things. I like books of art.”

But don’t get the wrong idea. By book of art, Call means something different than the heavy, excessively margined, glossy-print coffeetable art books that make for great Christmas presents for your cultured brother-in-law. The kind of art book Call is putting together is for a culture all its own, where margins are optional, any paper that will photocopy will do and layout is often done with scissors and tape. This is the zine culture, and Swinj No. 6 might work better as a gift for your skater nephew than his stodgy, corduroyed father.

The zine culture is a world unto itself. Zines started out as a method for small, micro-communities, often outside the mainstream, to create a community and spread the word (or image). Usually the zines are distributed free of charge. Politics, art, comics, extreme sports, music, religion — anything can come under the rubric of zines. They are the extension of the alternative newspapers passed out in high school bathrooms. Or the descendants of the revolutionary pamphleteers (read Lenin or Hamilton, depending on your political persuasion). Without a doubt, they are the forerunners of the now pervasive blog. Their power comes from the community that gets behind them. In recent years, zines have become extremely popular, and some, which started out as black-and-white, Xeroxed, stapled, productions have grown to full glossy spreads.

Swinj hasn’t reached this point, but Call has introduced color into some of his publications, and the most recent one, No.6, boasts 153 pages and over thirty artists, twice the size of any previous edition. 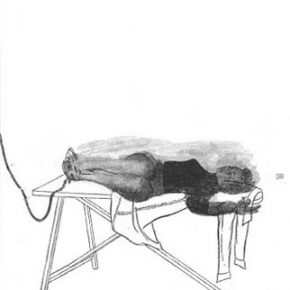 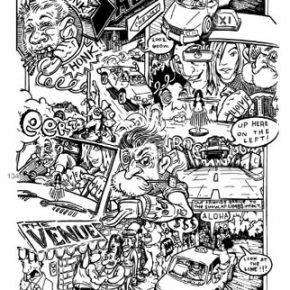 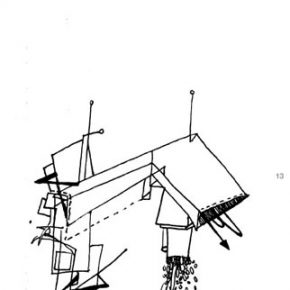 Tessa Lindsey’s contributions to Swinj No. 6 are a series of collage works that incorporate drawing and photo-copied images, (which work particularly well in the zine format), and examine questions of identity and sexuality. Photocopied images of a 50’s pinup girl in shorts and sweater mix with drawings of an ironing board and iron while captions describe the girls longing to recapture the magic of an erotic dream. It reads almost like a short comic (of which there are other examples from artists like Call, Sri Whipple and Jason Jones) but has the look and irreverent tone of some of the California collage artists of the fifties and sixties.

Cein Watson’s odd, undefined shoots and bubbles that lead from one thing to the next remind me of what I remember doodling on my notebook margins in Mr. Jaeger’s German class in high school. A lot of the work in the zine is stuff taken straight from people’s sketchbooks. Pages out of Steve Larson’s sketchbook show drawings of urban scenes including notations for the development of finished work. This look into the thinking process of the artist, and the immediacy of the drawing medium, are what draw you into a publication like this. 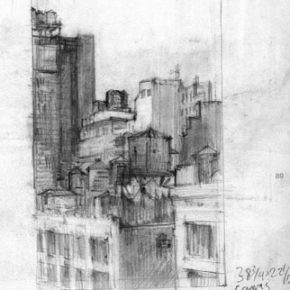 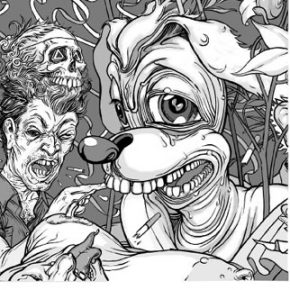 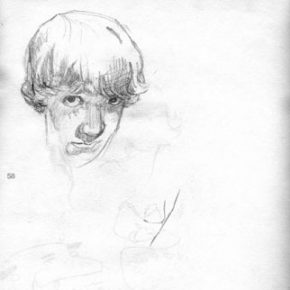 Sri Whipple’s denizen of liquored up, chain-smoking skeletons, bogeymen and cartoon puppies, at home on the back of a skateboard, reproduce particularly well in Swinj No.6. I found myself wishing that more of the art looked this good in reproduction, though I suppose if it did, this would feel more like an art publication than it does a zine. For two of David Clark’s pages, Call has shown the photocopying process. You can see the spirals of Clark’s sketch pad — an ode to the zine aesthetic, which was much more prevalent in previous editions.

The finely rendered drawings of Jonathan Clarke have the delicacy and intricacy of a Renaissance silverpoint drawing. But, of course, his subjects are slimy, sharp-toothed creatures out of a horror flick. But that’s what you get in Swinj. 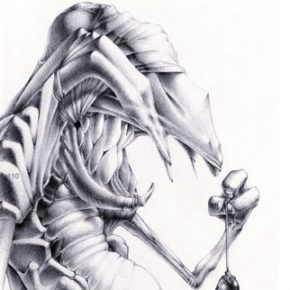 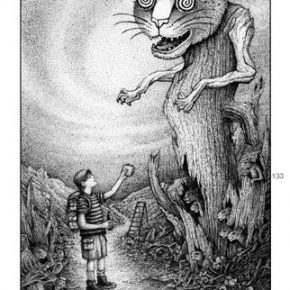 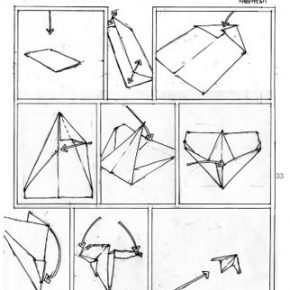 Patrick Eddington’s cats are another example of magnificent and delightful drawing, though the photocopying process dulls them a bit. In some cases the work seems a bit clumsy (well there is a certain purposeful clumsiness in a lot of these but that’s not what I’m talking about), like those sketchbooks passed around in high school by the art kids. If I keep mentioning high school, I suppose it’s because that’s what Swinj reminds me most of, the time when kids’ notebooks would get passed from one interested kid to the next; when kids who “could draw” cared more about album cover art and comic books than the march of art history.

There is a certain ethos created by this publication. It is the sense of a group of friends, a group of insiders, that sense of belonging that comes when you’re around other people who don’t belong to the mainstream; if nothing else that is what this publication is going for. But there’s something different in this edition of Swinj. The production is better, the perfect binding gives it a quality feel, and I don’t know if Call’s circle of friends is simply getting larger or if they are all maturing together, but the art seems to be getting more professional.

Maybe that’s because Call’s been at it for 8 years, so he has some experience. “It’s actually easier than it used to be,” he says. Swinj has never been published on any type of firm schedule — you can look online and see all the former editions to see what I mean — but Call is convinced he’ll keep at it. “SWINJ will continue forever I imagine. Although I try and follow a philosophy that Art Spiegleman had with RAW magazine, creating each issue as if it’s the last, put all you’ve got into it. Once your ready another shall arrive upon its self. I have a few different zine projects currently in the works all under SWINJ ART PRODUCTION, collections of drawings, comics, and themed collections. They shall happen when they do.”

When I pointed out to Call that there are certainly easier ways to get artwork seen (websites, for instance) he said the zine/book format felt more real. “It’s not pixels on a screen. It’s real. You can share it in a group, whereas a website or e-zines are most usually viewed privately. . . You own it. You don’t just visit and look.” To own your own copy of Swinj No. 6, visit Call’s website or, for the “real” book buying experience, go to Ken Sanders Rare Books.