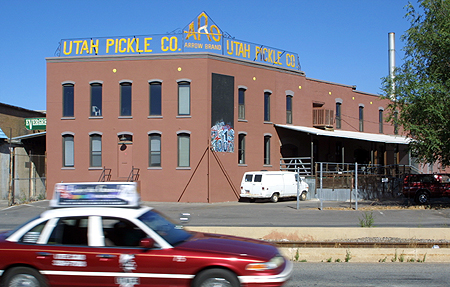 TRASA, the Urban Arts collective, has found a home in a big, handsome, old, brick, factory-looking building on the west side of downtown SLC. The organization, which takes its name from a Sanskrit word describing a moving collective of living beings, is a charitable arts and education program designed to connect area artists in order to share ideas, knowledge and resources.

During July and August TRASA presented “Emerging Women: all media,” a juried show representing the artistic explorations of 41 local artists, ranging from up-and-coming young women to grandmothers with a lifetime of work that has never before been shown. The visual exhibition served as a backdrop for two months of events showcasing female performers in genres ranging from indie rock and drum n’ bass to theater and modern dance.

As is usual with such shows, the concerns of the participants in “Emerging Women: all media” were quite various, as was the quality of the work.

Although many of the works were technically competent, they often lacked cohesion of feeling or thought. Each work seemed to point the viewer in many directions, so that all that was communicated clearly was the decorative quality of the work.

An exception was “Spilled Milk,” a large painting, about 4′ tall by 3′ wide, by Teresa Lane. This painting is both beautiful and creates a clear sensation of mystery through its color and the way the paint was applied. Its most striking device is the use of a piece of linoleum as part of the painting surface. The linoleum is patterned like a Turkish carpet, and the painting includes other references to floors. The artist uses a limited palette of colors, and the painting is generally a glowing, translucent dark red. Near the lower center is a small translucent white image of what appears to be a cake or cheese with a slice removed. Although I did not understand the reference to spilled milk, the painting is gorgeous and somewhat mysterious. 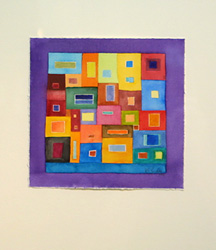 Another successful work was Kathleen Ferdon’s painting “Earthly Delight” — an unpretentious little watercolor confected of colorful dancing rectangles. It is completely nonobjective, and uses a shallow space and juxtaposition of colors and sizes to create a lively and delightful effect.

Other works, though ambitious in design, are less successful in result. “Medusa” by Olivia Glascock is an attractive mixed-media book about 8″ square, with a stiff folder to contain it and a beaded bracelet placed next to it.

The green marbled inside of the folder and the printed end papers of the book are sumptuous, as are the delicate rice paper and gold pages inside. The decorative “S”-shaped snake in brass relief inset into the book cover adds to the book’s opulent appearance. The contents of the book are a few delicate drawings of a pretty female head with snakes for hair. This “Medusa” is shown in several mental and physical states. The drawings look like overexposed photos. Medusa herself looks wan, effete and powerless. Instead of the muscular serpents that usually adorn Medusa’s head, the snakes in these drawings look as innocuous as worms. In Greek mythology Medusa was a powerful Gorgon whose eyes turned anyone who looked into them to stone. Clearly Glascock’s “Medusa” represents a Medusa shorn of her power, and by its opulence the book indicates that this is a precious image. This pretty, sickly Medusa saddens me, and her presentation as something precious is sadder still. Perhaps the beaded bracelet was left by the Greek Medusa to re-empower her eviscerated sister? 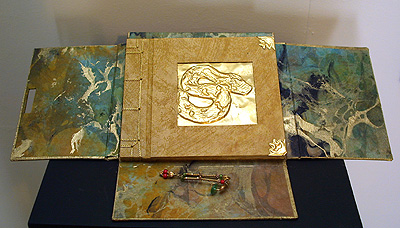 “Archaic Torso of Apollo” by Linda Woodruff Bergstrom consists of a large sheet of clear plexiglass divided into two sections. On one half of the plexiglass sheet is a frontal relief of a large male torso, from waist to neck, made or cast in gauzy cloth stiffened with a clear medium. Inside the rough, generalized, translucent torso is a light, and the cloth extends beyond the edges of the torso in vague waves.

On the other side of the plexiglass, printed in gold, is a poem by Rainer Maria Rilke, “Archaic Torso of Apollo,” in English translation from German, with no translator noted. The poem begins:
We cannot know his legendary head
with eyes like ripening fruit And yet his torso
is still suffused with brilliance from inside
like a lamp, in which his gaze, now turned to low
gleams in all its power. Otherwise
the curved breast could not dazzle you so nor could
a smile run through the placid hips and thighs.

The gauzy relief torso in Bergstrom’s work is indistinct, unexpressive, and certainly not beautiful. It is cut off at the waist, as if to exclude the sexual implications of the description of Apollo’s hips and thighs in the poem. The light within the torso is a literal representation of Rilke’s words, “. His torso is still suffused with brilliance from inside like a lamp.”

This work is a lesson in the difference between art and not art. On the left is the Rilke poem: rich, suggestive, sensual, and definitely a work of art. On the right is a literal representation of a part of the poem, with all of the flavor and wonder of a box of cereal. The torso is dull, and does not attempt to parallel the feeling of the poem. The result is an interesting lesson in the meaning of “art,” but as a work of art in its own right it is too pedagogical for my taste.

A number of the paintings and drawings in this show are signed in very odd ways. For instance, there is a lovely watercolor of a winter landscape composed in horizontal bands. In the front is snow, then winter dark trees, the rolling hills with a bit of color, and above a wet into wet painted winter sky with clouds. Sounds pleasing, does it not? However, the artist has signed the painting twice on the field of snow, in lines thicker than the lines of the trees. This places the signatures in the very foreground, and makes them the most important part of the painting visually!

On the second floor of the TRASA building is graffiti from a previous show. It was there that I saw the most ambitious work displayed. A large L-shaped wall covered with a very abstract expressionist graffiti caught my eye. There is an underpainting of what looks like blocky and pointy word forms in mostly purple, blue and yellow. This layer of painting has a kind of shallow, rectangle based three dimensionality. Over that are painted orange squares, words, and balls and ball-like cartoony heads. The surfaces in the balls and heads are white, with colored lines around the balls and used for the drawing in the heads. The second layer of painting seems to float over the first, once again in a shallow abstract expressionist type space. The work gave me feelings of energy and vertigo. It is like the child of a Jackson Pollack and the comics.

TRASA did the arts community a great service to take a chance and produce an exhibit like “Emerging Women.” Unfortunately, the show was disappointing overall. However, the work of emerging artists is not expected to be completely formed. I hope each artist will continue to clarify her vision and expression, and that we will see work that is more powerful and exciting from these artists in the future.

This article appeared in the September 2002 edition of 15 Bytes.