Transitions in Art and Theatre 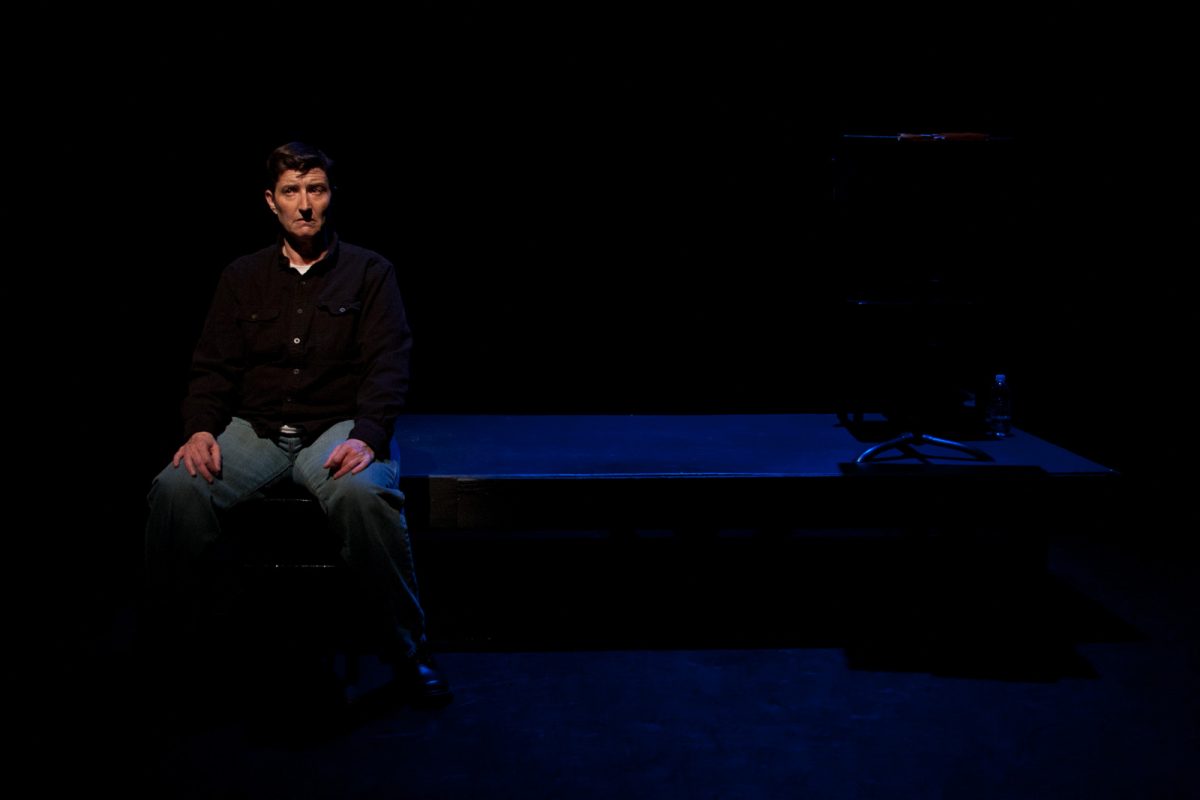 Teresa Sanderson delivers a moving performance as Eric, a man who used to be Erica. He confides in the audience about his struggles and explores the question of what it means to be a man. Photo by Rick Pollock.

These broad questions are made digestible because they’re addressed through the experiences of a unique character, Eric. The audience is brought on a striking journey as they learn about Eric, who has recently left behind his life as Erica. His story is compelling not because he is transgender but because everyone shares more common ground with Eric than they might initially believe.

Played by Teresa Sanderson, Eric takes the stage as a speaker for an event titled “Living Trans.” As Eric relates anecdotes from his life — some humorous, like when he finds out his new girlfriend is a gynecologist, others heart wrenching, like the story of his son’s rejection — the theatrical audience is transformed into his conference audience, a strategy that engages the viewers in what is a series of personal disclosures. Through an elegant bit of stage design by Jerry Rapier, also the Producing Director, Eric is behind a podium when he shares the stories he has prepared, but moves off the platform, away from the protection of the podium, and closer to the audience when he is sharing a raw piece of his life that he seems surprised to reveal.

As the play opens, Eric nervously begins his presentation when he realizes that nobody has the handout to accompany his talk. He proceeds to give everyone in the audience a list titled “LIVING TRANS: An Intellectual Defense of Trans Experience,” to which he refers throughout the play. This format could have come across as preachy or confessional, but Eric’s struggles are so relatable it begins to feel as though he’s confiding in close friends. 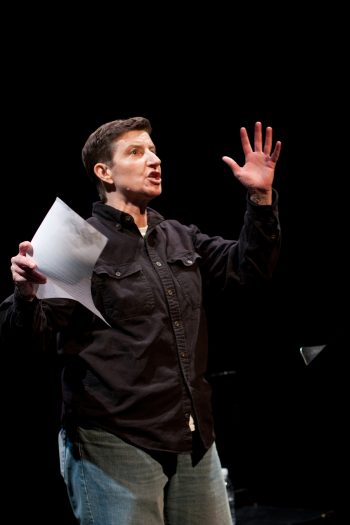 The audience becomes part of the performance when Eric delivers a talk about living trans and hands out a list (seen here in his hand) of 17 points titled, “LIVING TRANS: An Intellectual Defense of Trans Experience.” Photo by Rick Pollock.

Eric tells the audience about his constant uncertainty. As someone who recently transitioned from being female to male, he is still feeling out masculine behaviors that seem right. This is no easy task, because like point three on his list says, “Any specific meaning of ‘masculine’ comes from culture or our individual minds.” Eric is often weighing himself against the most traditionally masculine person in the room, and sometimes finds himself lacking. This issue of self-confidence is universal and can be understood by anyone who has ever compared himself or herself unfavorably to another person. In one particularly moving scene, we learn it’s this lack of self-confidence that led to Eric’s marriage. When he was still Erica, she met Joe at church. Joe is intelligent, athletic, and good-looking. They ultimately tie the knot because of an accidental pregnancy, but more importantly because of how Erica feels about Joe — she wants to be him.

After Eric transitions, he falls in love with Addie, but he’s terrified to disclose his past. It’s unquestionably human to feel vulnerable in love and to be frightened about divulging personal, intimate details that could harm the foundation of a budding relationship. Eric worries about what so many of us do: being loved for who we are, maintaining honesty in a relationship, and satisfying the needs of those we love. His story is often less about being part of the transgender community, and more about the human condition.

Bennett never answers his initial question, “What does it mean to be a man?” Instead, he implies that masculinity is too complex an issue to be given a simple definition. It manifests itself differently in individuals. As points seven and eight on Eric’s handout explain, “Regardless of biology, we can have greater preference for expressing ‘masculinity’ over ‘femininity.’ What we prefer is a property of psychology, swayed and often restricted by cultural ideas.”

Local visual artist Julian Sagers, who has seen the play and is himself trans, notes that, “Not everybody identifies gender the same way, and one is not better than the other.” It’s an issue that he explores through his own artwork, which will be on display as part of Artists of Utah’s 35 x 35 exhibit. Sagers’ “Female-bodied,” is a self-portrait of the artist in a non-descript setting. In jeans, topless, throwing back a beer, the figure’s stance and posture have a masculine swagger; soft breasts are the only indication that Sagers is not biologically male. His work could be described the same way he described Eric(a), “raw.” 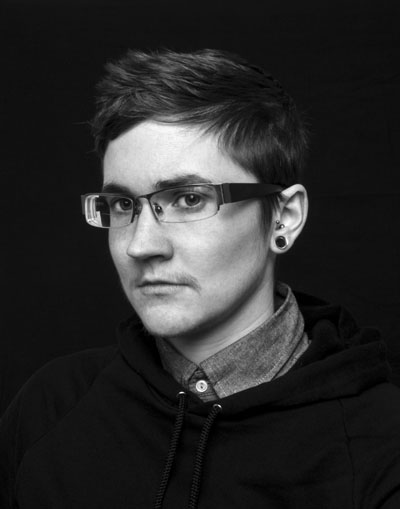 Speaking to Sagers, it becomes evident that art has always been a part of who he is. In junior high and high school he literally took all of the art classes that were offered and then repeated some. He’s been drawing for much of his life and nobody in his family was surprised when he decided to study art in college. “I’ve never wanted to do anything else, I’ve been drawing forever,” he says. “My grandmother has a still life in her house that I made when I was four.” One of the reasons he pursues art with such vigor is it allows him to view the world from a different perspective in the sense that artists are always trying to communicate a way of seeing what’s beyond the surface of something.

Artwork by Sagers intentionally conveys a sense of melancholy. Just as Eric’s experience left him estranged from one of his children, Sagers too has experienced loss. “I think being trans is extremely isolating. You’re generating less options for yourself,” he says, noting that it would be easier to meet a partner, make close friends, and find physical safety if he conformed to the traditional female identity. “Me being myself and being happy is worth it, but it’s a catch 22,” he says. This sense of isolation and loss can be seen in “False Advertising,” another self-portrait, where he sits alone with his arms and legs crossed protectively over his body.

But Sagers is quite opposite from Eric and his vulnerability isn’t readily apparent. The young, twenty-something is about to graduate from the University of Utah with a BFA in printmaking and his personality is bold, honest, and brash. When he encountered a male classmate that refused to refer to Sagers as “he,” Sagers response was to turn it around and begin calling his classmate “she.” Before the end of the semester, his classmate began using the pronouns Sagers prefers. 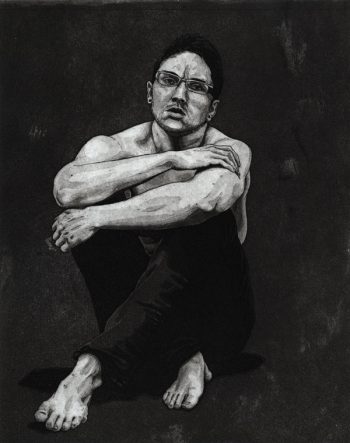 This image by Sagers explores the isolating experience of living trans. “False Advertising,” 10″” x 8″”, aquatint and softground. Courtesy of the artist.

After college Sagers plans to take a few years off and build his portfolio, then apply to graduate school. He’s thinking of going to Japan to teach English, but whatever he does, he will be creating art. He wants to work on a way to communicate through his art that isn’t as subtle as his current pieces, and he may experiment with letterpress and bookmaking. The combination of images and text may help convey his intentions with more clarity.

At the end of the day, everyone wants to be embraced for who they are. Eric laments having had to wear dresses as Erica, and trying to be the girl that others wanted to see. Sager’s frustration with society’s rigid gender roles is evident in “A Clever Deception Indeed,” a print portraying a wolf in sheep’s clothing. “We put on these facades to be in a particular group whether or not we actually belong,” he says. Through Eric(a), Plan-B Theatre hopes to start a dialogue about understanding the multifaceted nature of gender, so people can disrobe from their costumes and be comfortable in their own skin. Sagers hopes to accomplish something similar and uses his work to confront rigid gender roles and make people aware that biological sex does not determine gender.

In his work, Sagers explores how social cues are used to convey gender. From a distance, it’s not readily apparent that Julain Sagers’ self portrait depicts anything other than a man with swagger, casually tossing back a drink. “Female Bodied,” 10″ x 4″ aquatint. Courtesy of the artist. 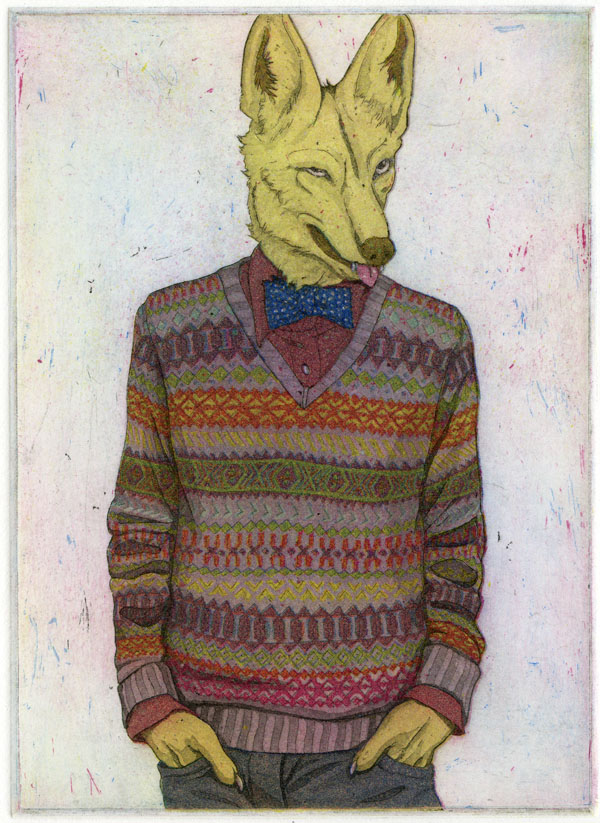 Sagers illustrates a wolf in sheep’s clothing to convey the notion that biological sex is a superficial way of defining gender. “”A Clever Deception, Indeed,”” 7″” x 5″”, four-plate aquatint. Courtesy of the artist.

Plan-B Theatre Company will be performing Eric(a) in the Studio Theatre at Rose Wagner through March 10. Tickets can be bought online or by calling 801-355-ARTS. Julian Sager’s work will be on display as part of Artists of Utah’s 35×35 exhibition, which opens at Finch Lane Gallery Friday, March 8, 6-9 pm and runs through April 26.