David Linn, whose immaculately rendered monochrome images of figures in states of spiritual struggle and enlightenment are well-known in this state, says the creation of art “requires and elicits self discovery.” One of art’s greatest powers are the surprises and revelations that emerge from the artistic process, he says. It can be disillusioning, then, “when the viewer conjures up a meaning separate from our own.” But that is the nature of metaphor. 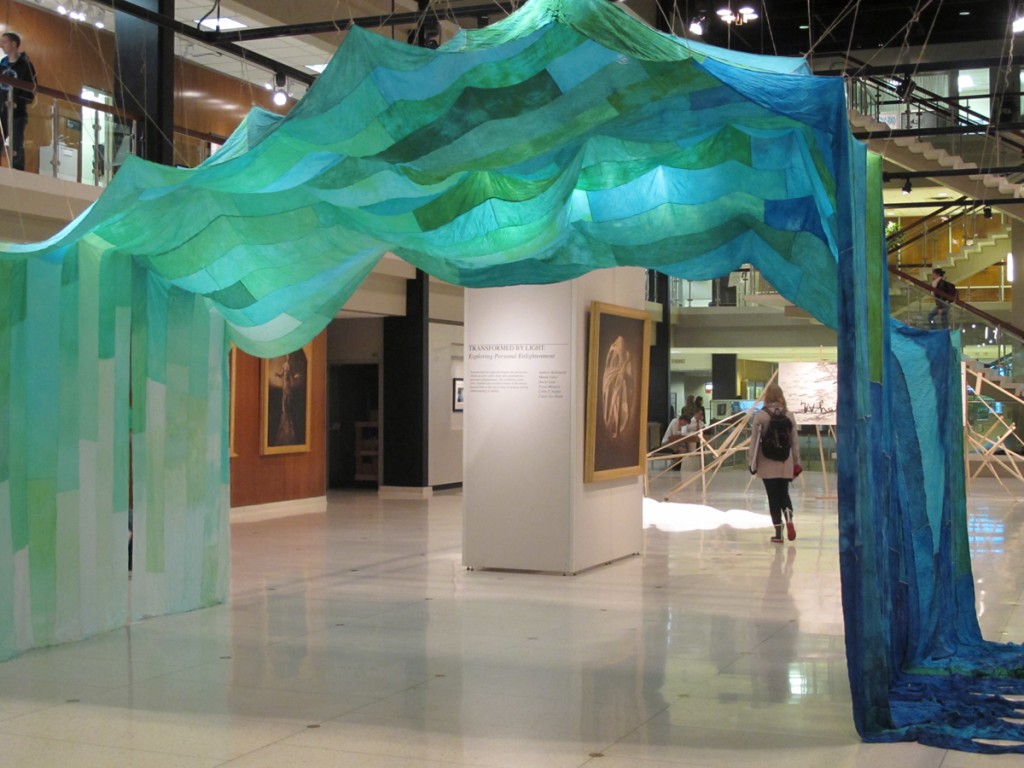 View of Transformed by Light, including Mandi Felici's Current, and works by David Linn

Linn’s comments appear in  a short piece written by Christine Heaton in the catalogue for the exhibit Transformed by Light, on display at BYU’s HFAC through October 29. Linn joins Andrew Ballstaedt, Mandi Felici, Tyson Monson, Colin T. Nesbit, and Casey Jex Smith, all BYU alumni, in an exhibit curated by James Swensen and Spencer Twelmeyer that explores the artistic process as self-revelation. Transformed by Light reveals mature artists employing a variety of methods and metaphor to engage spiritual questions too often coated in saccharine and strict realism.

Working in collage, paint, textiles, photography and installation these artists demonstrate that any material can be a medium for artistic and self-exploration. Casey Jex Smith likes playing around with pop imagery, especially the kind that pervaded his upbringing in the LDS faith. Out of the church-published paper cutouts, used for years to tell scripture stories and now the stuff of fond or satiric recollection, he creates a chaotic menagerie of individual elements that coalesce into a work of art. In his two-panel mural, Horn of Confusion/Sunblade of Disruption, a one-eyed figure, holding a flaming sword, is created from hundreds of these cutouts, while in the other panel a single figure in a moment of revelation is represented by abstract geometric forms. 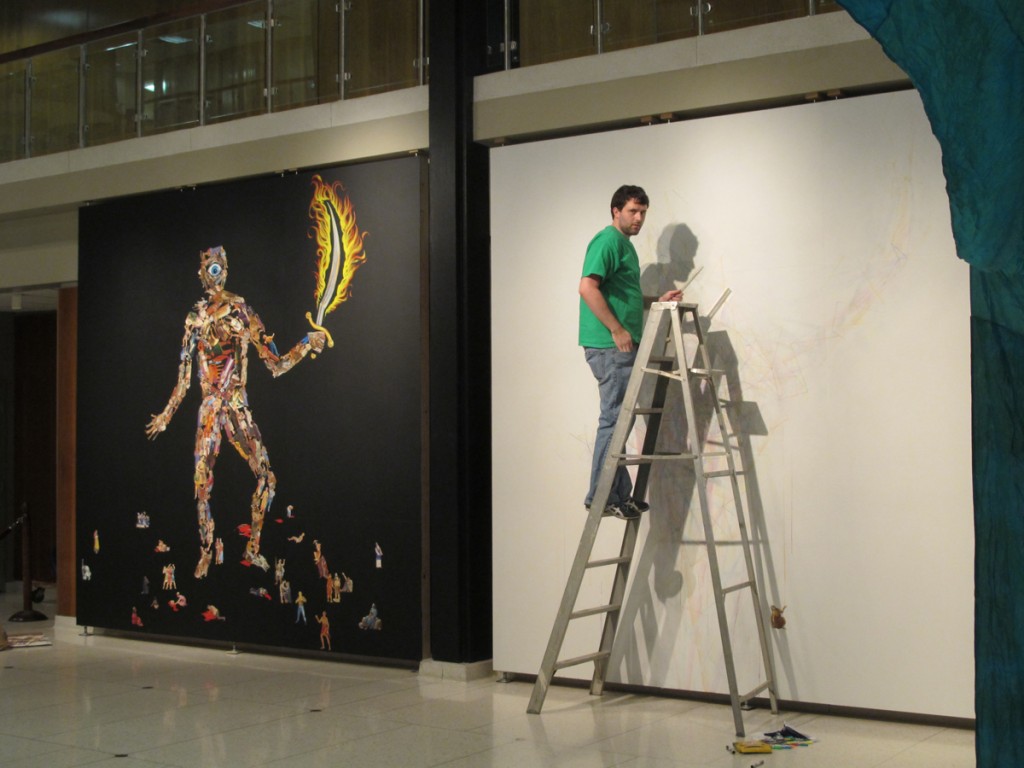 Casey Jex Smith installs his work at Transformed by Light

More than painters or sculptures, photographers are tied to the reality of the visual world that surrounds theme. Tyson Monson makes of his work a search for personal identity by looking for a “spiritual sense of the place as opposed to the literal.” He photographs locales that have a personal meaning to his own narrative, imbuing them with a sense of nostalgia and personal meaning.

Creating art is about creating worlds, whether the artist throws herself into the task of creating a detailed representation of what she sees before her, or pulls down from the heights of her imagination a world remembered or longed for. As Kevin Nemelka writes in the exhibit’s catalogue, Andrew Ballstaedt “intentionally paints beneath his academic training and abilities to capture the beautifully melancholic faux-naivete of fantasy-folk art. ‘One of my teachers asked us to create the history that we want to come from,’ Andrew remembers. ‘I really like that idea, ‘inventing a history.'”

Mandi Felici found her inspiration for invention through travel. Her piece, a translucent textile installation that hangs above the exhibition space as if serving as a portal between two worlds, was inspired by a trip to the Caribbean. Struck by the turquoise and brilliant jade of the sea, she decided to incorporate the colors in this shimmering piece that acts as a metaphor for “the people and places that flow into our lives and how they influence our development.”

For the waves in his installation Can’t any of you sing? Sing now and raise the dead, Colin Nesbit uses sand, creating deep crests and troughs through which an old whaling ship struggles. The ship and waves are dwarfed, however, by a large billboard, the disparity in scale imbuing the piece with the ominous presence of death and God, appropriate for a work whose title was taken from Melville. 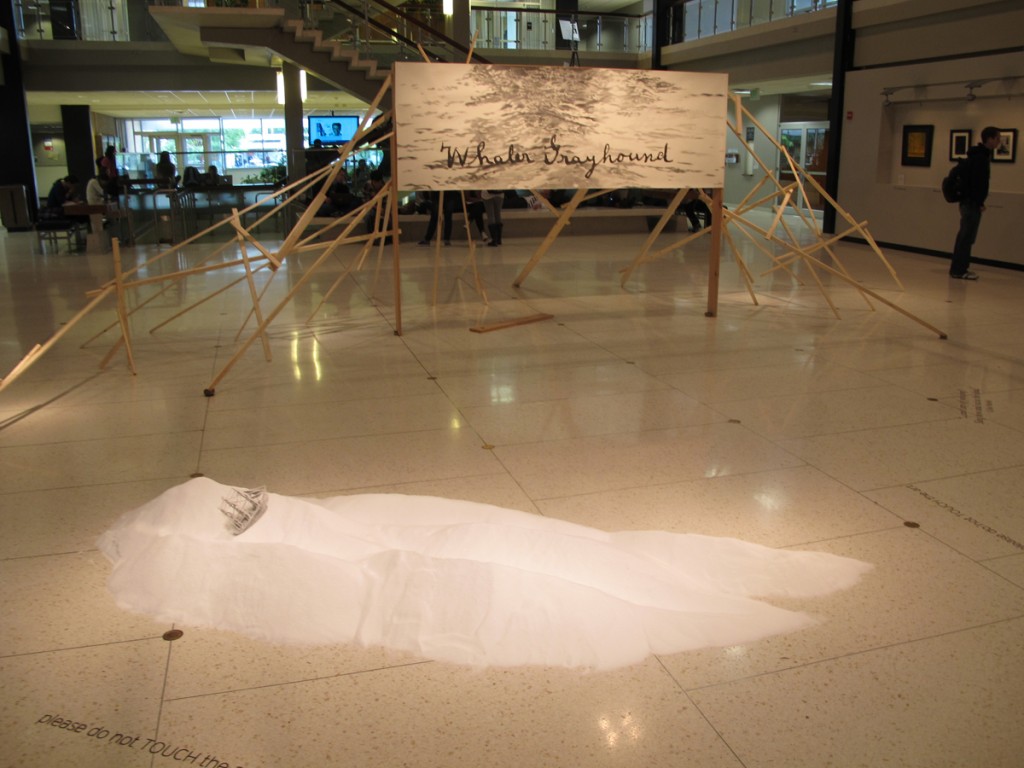 Colin Nesbit's ...can't any of you sing? Sing now and raise the dead

Despite the artists’ shared background, both in the LDS faith and at BYU’s art program, no one piece in this work resembles the other. Each artist has found in their chosen material a medium through which to explore the art of personal discovery that is the artistic process.