Transformation, Physical and Spiritual, at the UCCC 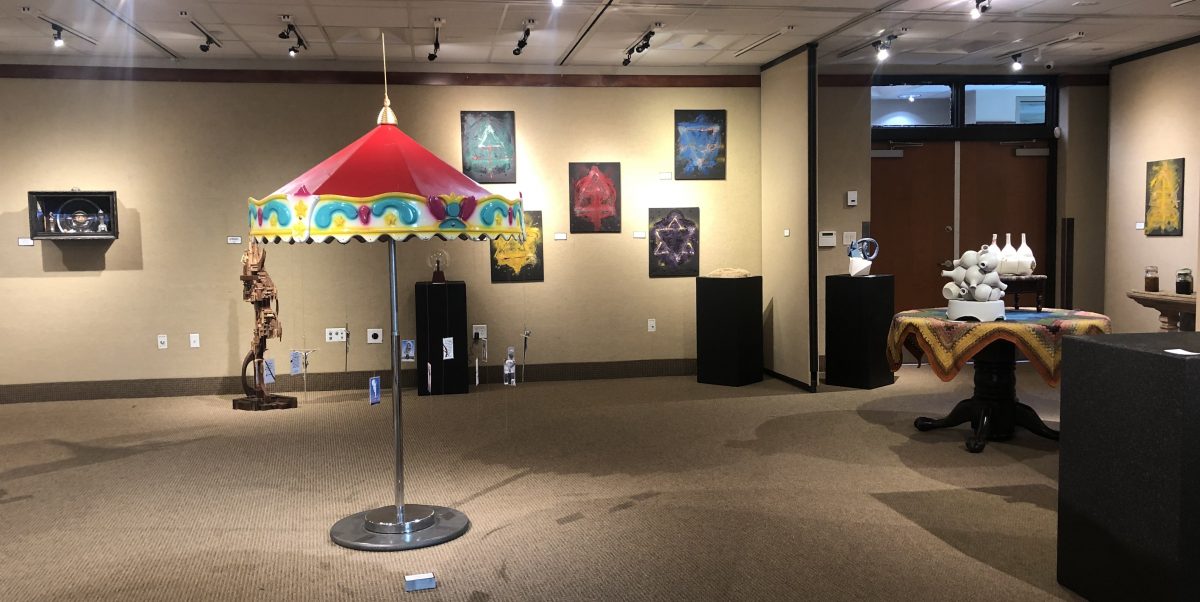 Susan Klinker’s assemblage, variously titled “Scarab Piece” or “Desert Transformation,” recounts what she describes as her “transformative experience during a desert meditation” while she was “on a three-day prayer retreat at Christ in the Desert Monastery, Abiquiu, New Mexico.” The work initially seems to resemble a rugged, weathered cross, a staple of Southwest arts, though this one has nothing to do with crucifixion. Rather, its two elements consist first of a vertical column that represents an ordeal, a climb or struggle towards understanding and peace, while what might be taken for arms are in fact an element of the landscape: a horizon of sorts where the rising pilgrim “crosses over” into a new phase of her journey. The scarab beetles that document the ascent grow less natural and more abstract as they rise, until the one at the intersection is transformed into gold beneath simultaneous night and daytime skies.

Transformation of base matter into gold is, of course, the emblematic quest of the Alchemist, whose work was an early form of chemical science — hence the name, in which the Arabic prefix, “al,” also seen in “al gebra,”survives from the days when Muslim scholars enlightened the dark ages of medieval Europe. But spend a few moments in conversation with UVU professor, polymath, and glass artist Andrew Kosorov, the organizer of Alchemy Transmutations, showing currently at the Utah Cultural Community Center, and it will become apparent that alchemy ultimately concerns transformations of more than just physical materials. It has something to say about the place in anything where rules, principles, and techniques cross over a worldly boundary and come to be practiced as an art.

This exhibition grew out of Kosorok’s growing awareness of the damage being done to his students by isolation during the pandemic. He conceived of a collection of works rooted in the alchemical view of nature that would be accessible to everyone at all times. While in the main the art works he asked his artist friends to contribute were not made for this specific purpose, he felt, and they agreed, that they fit his goal. In the end, nine artists together provided over 60 objects, each of which received a key word connecting it to the material cosmology and speculative thinking of alchemy. 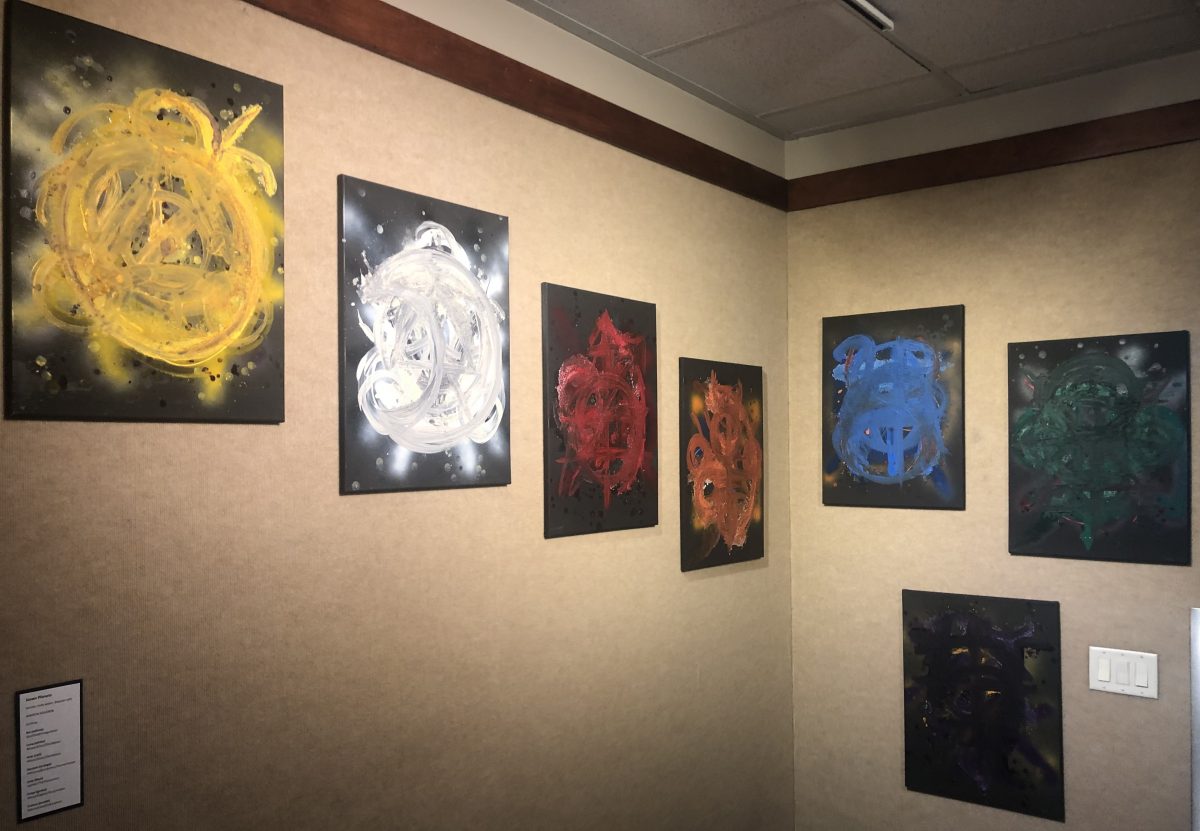 Aside from Kosorok’s own glass and mixed media works, seen here but also shown over the years in places like the Spring City Museum, the works here that may come closest to transforming alchemical thought into physical form are the ceramic sculptures of Amber Egbert. Not only do her geometric figures seem to bring to life their poetic titles and concepts evoked by them, but the vase forms jumbled together in her collections of figures and vessels are the sort of gourd-shaped pots likely to be seen in the illustrations illuminating medieval texts. Kosorok associates “Untitled: Stack no. 2,” for example, with sulphur, the third most common chemical in the human body and an enormously important factor not only for its use in batteries, but in its impact on international trade relations. Meanwhile, as is true of all good art, sculpturally energetic and colorful explorations of space like “Upheld” (associated with Air) and “Moving Through” (Fire) are beautiful and sensually satisfying in themselves, aside from their conceptual contents. 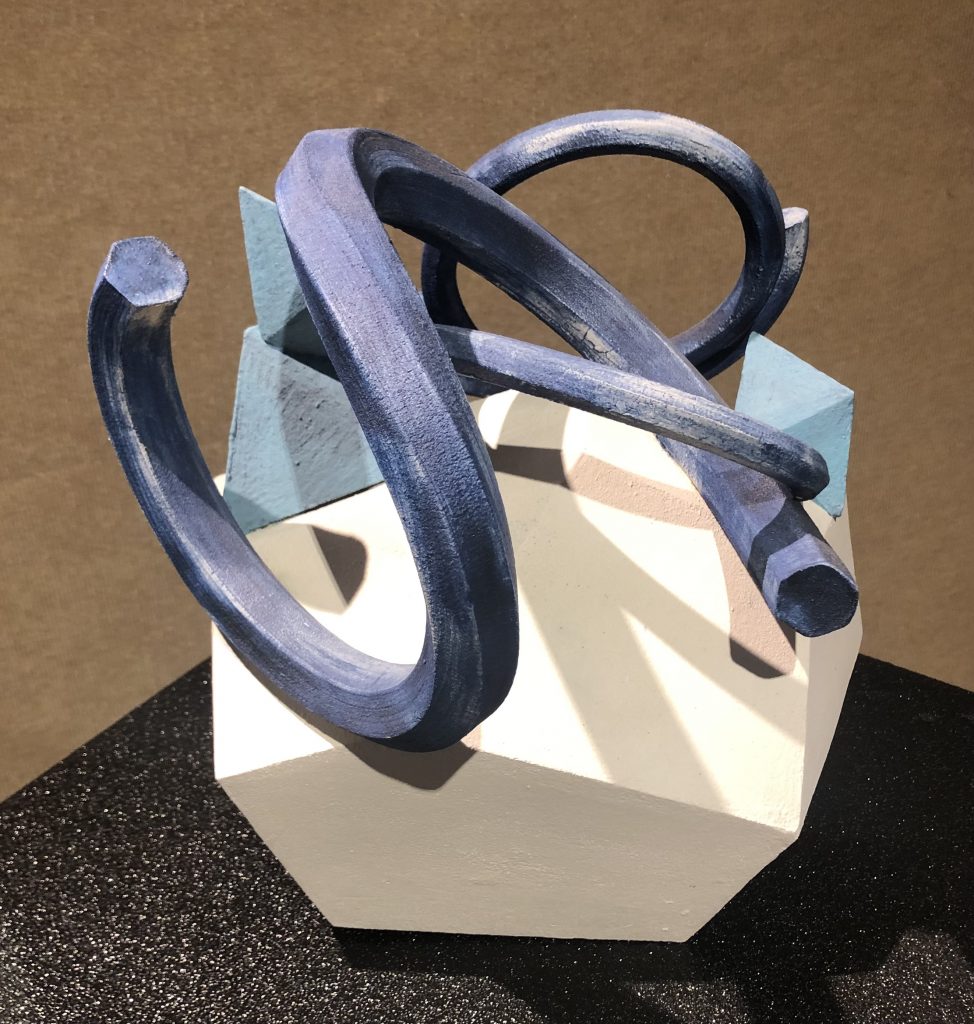 A senior figure and inspiration for most of the artists in this exhibition is Frank McEntire, whose long career in the assemblage of found and castoff materials spans several major, interrelated topics of concern to them all, including spirituality, the impact of war, and threats to our shared environment. It was his achievement over the years to anticipate the eventually primary importance of all three topics and find connections between them. To take one example from the nine here, 13 years ago, in “Full Lotus: Weapon of Detachment,” he placed a jet pilot’s helmet and remote breathing apparatus on a seated figure of the Buddha, thus suggestively connecting the confusion between serenity and indifference shared by some celebrity-addled religious figures with the lack of concern shown by many political and industrial actors to the climate-wrecking impact of war. 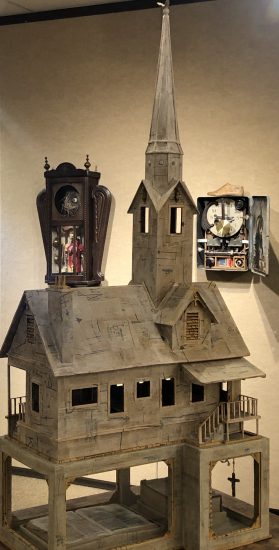 McEntire has been called “the father of us all” by one of his younger colleagues, who have been known to show up and help set up his recent, retrospective exhibits. His influence is seen most clearly here in the works of several prolific artists, including Vincent Mattina, Abe Kimball, the husband-and-wife duo of Zane and Taylor Anderson, and the remarkably engaging Jason Lanegan. Between them, Lanegan and Kimball demonstrate that far from being isolated in the world of art, Utah often stands on the precipice of the new. One recent and overdue trend in art is the miniature, often in a tableau, perhaps a reaction to the gigantic dimensions brought about by Abstract Expressionism and public art, alongside a renewed self-interest in specific human achievements . Each artist has contributed a scale model of a church building that combines variously abstracted characteristics — note the use of sewing patterns as a way of foregrounding intentions — with service as a kind of reliquary or setting for associated contents. Lanegan’s “Three Worlds” contains both a quilt and a set of heavily annotated scriptures; Kimball’s “A Hand in All Things,” which Kosorok identifies with “Three Worlds,” contains a metal bank in the form of a hand with a slot in its palm for coins, which fill a receptacle at its base. It’s a wonderfully compound comment on ambition and graspingness as they so often invade the range of human desires and pursuits.

To some degree all these artists combine found and castoff, hand-made and manufactured things to produce new objects that both comment on their original identities and project how new ones emerge, both by recombination and transformation. Elsewhere, Brandon Truscott’s wood assemblage turns shards from the shop floor into science fiction and his “Drawing with Antler and Balloon” turns a bit of nature and a bit of the unnatural into antagonistic collaborators. Here and there throughout the gallery, Andrew Kosorok pops up with a bit of old-looking glass or a futuristic, luminously dancing globe. His symbolic glyphs combine colors and chemical constituents in ritual fashion, the importance of ritual being another recent, Western cultural discovery. Like a passed master, he touches each of his collaborators works lightly. The truth is he has invoked from them one of the more enchanting group shows we are likely to see. Michael Christensen, the finest exhibition designer I’ve met in 40 years of following art, says that of the 121 shows he’s staged in this one space, this may be the best. Sadly, he won’t be present for the newly-minted Community First Friday event, which will be inaugurated with Alchemy Transmutations on February 3rd. While details remain to be determined as they evolve, henceforth the UCCC plans to be open on the first Friday of each month from noon to 7 pm. Andrew Kosorok and Susan Klinker will be present for this first one, and other guests are anticipated in the months to come.