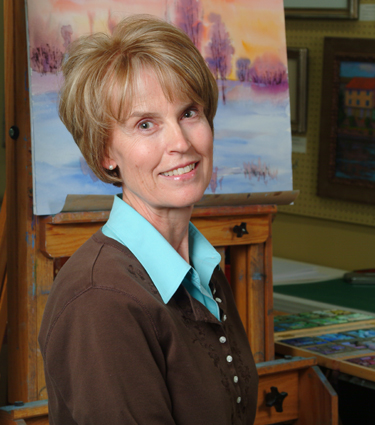 “I’m going back to using oils. Totally immersing myself. It is how I’ve always approached my art. I don’t know any other way to go about it,” says Colleen Howe, a Salt Lake City artist best-known for her work in pastel “I am going on a journey. I’m not giving up on pastels. I’m evolving, hopefully in the right direction. Immersing myself in oil painting is something I have to do.” Howe’s immersion in oil comes at a time when she is becoming recognized nationally as a pastel artist. A gallery owner in Laguna Beach mentioned Howe to me in October, 2007. “She is terrific. I think that her pastels are in a league with Albert Handel and a few others. And she’s from Utah, Dude.” When I tell Colleen about the gallery owner’s comment she is honestly pleased and almost blushes.

Howe started painting when she was around 6 years old. Riding her horse bare back around her family’s ranch outside Ennis, Montana. Her idols were the Nez Percé and Chief Joseph, their legendary chief, and she imagined that she was Native American, roughly braiding her hair, even doffing her shirt to feel the sun on her skin. She smashed red brick to powder, gathering raw painting materials where she could find them. “This is where my spirit joined the land. It is the quiet places here in the West that attract me. I sketched all the time. Pictures of my horse. The trees, Flowers. I guess it was a childish attempt to capture my life.”

In August, American Artist Magazine printed an 8-page feature on Howe entitled “4 Steps to Building Stronger Paintings,” as told to Collin Fry. “Zion Overlook,” a 30″ x 24″ pastel, enhances the cover. She keeps the original painting in her Sugarhouse Studio. One is amazed by the depth of captured light and atmosphere. Seeing it as she painted it, not in the magazine, is a revelation. 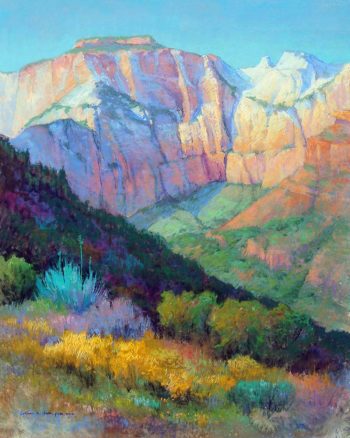 “You must suggest to me reality-you can never show me reality,” wrote tonalist artist, George Innes. How many different ways have art teachers and mentors said this to burgeoning young artists? It just might be one of the quintessential goals of the artist. Perhaps matching the words, “Show don’t tell,” that one is hammered with in undergraduate writing courses.

Seeing an artist of Howe’s stature switch to oils from pastels is a compelling event whether one is a practicing painter, collector or student. Without detailing too much about what has already been presented in other publications about Howe’s working processes, it serves the present thesis to mention the meticulous approach that she takes. First, it would be remiss not mention that Colleen believes strongly that there is an ineffable, spiritual relationship between her and the land. Viewing one of her pastels of the Manti La Sal mountains outside Spring City, Utah, one is struck by the light falling over the ridge line collapsing into diaphanous shadow.|1| One is convinced that she has walked these fields, stopped in the scrub oak to watch the light, wrestled with the changing values, sketching and sketching again, working her palette to capture just the right value and atmosphere. Before starting on the final painting Howe creates a watercolor or pastel sketch of the subject, sometimes going to the subject site at different times of the day to capture, “those transparent windows of light.” Then Howe prepares a color and value study, usually 12″ by 12,” paying attention to the pattern of values and honest color. It is apparent that if Howe wanted to, she could sell the studies as abstract works of art; they are so meticulously executed.

“I said, I am learning to use my skills with pastel to do my oils. Matching the layering of pastel with oils is my current challenge. I admit that I sand away a lot of pigment. Sometimes the oil feels a little bit heavy, the layering, and blending that I use in pastels is accomplished differently with oils. It’s glazes and using a light hand with the paint.” 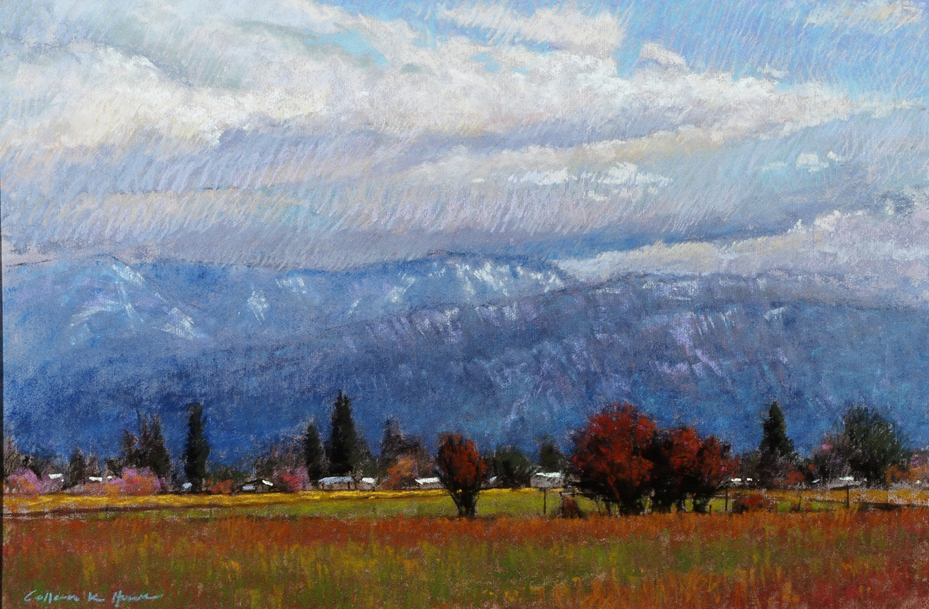 Visiting an artist’s studio early in the morning is a revelation. Howe’s ready to begin the day. One easel holds a painting of four Hopi, Native American woman wearing their hair in the lovely, curved, Fibonacci-esque hair decoration. Based on a photo made by Edward Curtis, it is the first of Howe’s paintings containing the human figure executed in oil. 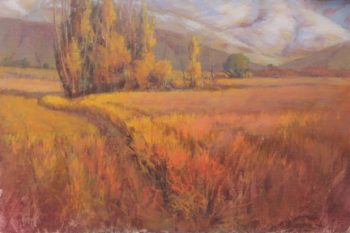 “The silhouetted human figure is of interest to me. And the architecture of the steps of the pueblo parapet that they stand on. Then the distance of the background. It’s an atmospheric challenge. But once again, the picture spoke to me, or I heard that voice that tweaks me before I start sketching,” Howe says. Another easel supports a landscape that is almost finished. Howe has been invited to exhibit at the prestigious, American Woman Artists Signature Show at Galerie Gabrie, Pasadena, California, December 5-27. Her submission is not a pastel, but a 16″ x 24,” oil painting, “Autumn in Vernon.” She surmises that her change in medium will be a surprise. It is a big step. The painting shows the deft skills that she learned from her mentors Michael Workman and Ken Baxter, among others. She is drawn to the tonalist paintings of Tal Walton and Montana artist, Russell Chatham. “Autumn in Vernon” must be a very successful piece for it is published as one of five pieces in a full-page ad in the December 2008 American Art Collector advertising the AWA Pasadena Art Show. One can see the tonalist influence in the painting, especially in the atmospheric rendering of the mountain background. The overall perspective is flawless from a middle distance copse of poplars, and perhaps a wild-grown apple tree. The foreground is fully rendered, in warm golds and reds, running to the trees through what one can take to be crested wheat grass, burnished in warm gold hues. And one can see the “windows of light,” captured deftly in the trees, but mostly in the mid-ground of the wheat field. 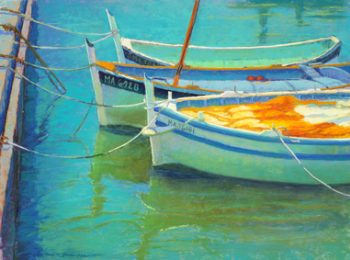 Collen Howe will probably never feel that her crossover from pastel to oil is complete. It is that dedication and fearlessness that the little 6-year-old Colleen gleaned from the land, that will serve the mature artist, Colleen, now.

One asks for forgiveness in advance, so forgive me, but seeing Colleen’s work, in her studio, and in many galleries, and savoring the early morning meetings at her studio, a quote from Jack Kerouac, yes that Jack Kerouac, seems appropriate. “Art is the Holy Ghost blowing through your soul,” comes to me.

Colleen Howe will be teaching a number of workshops in a variety of locales in the following year, including: St. George, UT (March) Mesquite, NV (April) Butte, MT (May-June) Haut Baran, France (October). For more information go to colleenhowe.com 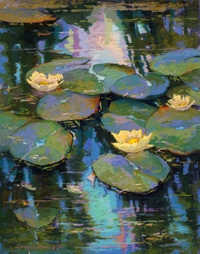