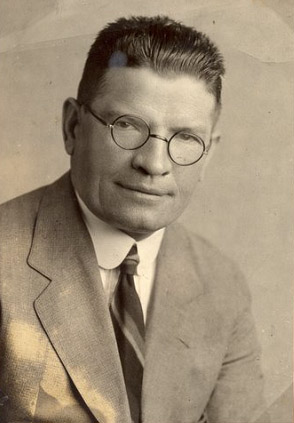 Though by lineage I’m 100% British, since I come from Knudsen Corner and remain in the minority of those who use the hard “k” sound for Knudsen instead of “Nudson” or “Noodson,” in a way I’m an honorary Scandinavian; or so I told myself this weekend when I joined scores of Torleif Knaphus’ descendants as they gathered to witness the crating of a half-life size bronze of Knaphus’ famed “Handcart Pioneers,” bound for the Emigrant Museum in Ottestad, Norway. I was greeted by dozens of Knaphus relatives and good friend June Langeland Pearson promised that she would not force- feed me any Ludivisk, while Steve and Marsha Wade told me about Marsha’s famous grand uncle.

A descendant of Vikings, Torleif Knaphus [1881-1965] was a rugged, fit athlete who excelled in track and swimming. As early as age 5, Knaphus showed his creative side by carving birds and human heads from pieces of wood and also sketched scenes of nature. At fourteen, Knaphus went to sea, harvesting the fishing lanes between Norway and Iceland. After witnessing numerous beautiful sunrises and sunsets as well as the Aurora Borealis and other natural occurrences loaded with saturated colors, Knaphus decided to become an artist. 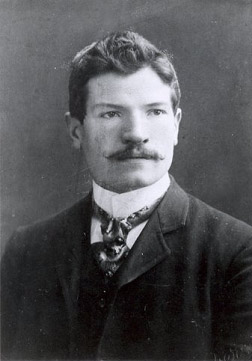 “Retiring” from the sea when he was nineteen, he completed an apprenticeship in decorative painting and later opened his own painting shop. During subsequent studies at the Royal Art School — where Knaphus settled on sculpture under mentor Lars Utne — the young student |2| was “invited” by his roommate to attend a concert. Actually, the roommate sat on him and another roommate until they agreed to attend the event, which turned out to be a Mormon production. Knaphus enjoyed the concert and during the following months attended other Church meetings. He converted to Mormonism and found himself being baptized in frigid water, reached by breaking the ice on the surface of a lake.

Knaphus continued his studies in Oslo for three years, at which time he was awarded a scholarship to study in Rome. He chose instead to immigrate to Utah, as was still the Mormon custom (1905). Upon his arrival in Salt Lake, Knaphus began picking up odd artistic jobs, including painting jobs in the Salt Lake Tabernacle and Temple. In 1909 he married Emilia Helena Christensen—”Millie” – and the couple settled in Sanpete County, home to many Scandinavians. Knaphus and his brother and fellow convert, Andrew, established a house-painting company there, but Andrew’s mission call to Norway in 1912 broke up the company, and Torlief decided to accompany him East in order to further his artistic training. He was accepted at the Julian Academy in Paris, a favorite of early Utah artists. After eighteen months of study, however, the World War forced the 33-year old to return to Utah, via a four-month period of study in New York. 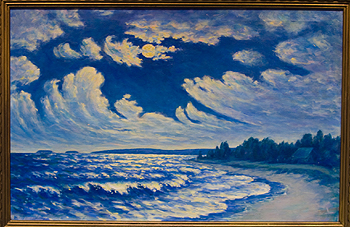 After his return, Knaphus was hired by the LDS Church to work on the construction of their Temple in Hawaii. A.B. Wright, LeConte Stewart, J. Leo Fairbanks and his young brother, Avard, were all there working. Knaphus worked on the Temple’s interior, and is credited with helping Avard Fairbanks, who “modeled in a highly artistic manner” the baptismal font oxen designed by the Temple’s architects, Pope & Burton, and supervised their execution in artificial stone. Knaphus still loved the sea and in his free time he enjoyed painting the sand, surf, and clouds in various lights.|3| His time in Hawaii was the beginning of a relationship with his most prominent and profitable patron, the LDS church. It also provided him with a sack of gold (filled with twenty-dollar gold pieces for his eighteen months of work) that enabled the family to purchase a house in Sugarhouse at 1446 East Redondo Avenue: they would spend four decades in the home. 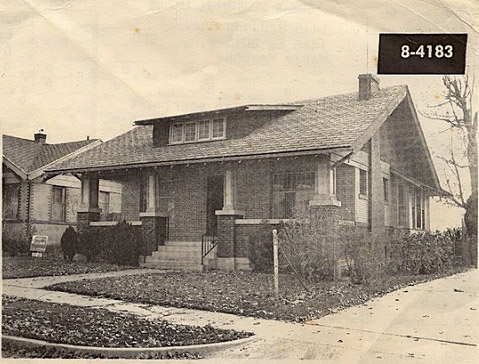 Soon after his return from Hawaii, Knaphus was hired to sculpt the baptismal font for the Cardston, Alberta Temple. When work on the Temple’s exterior began he returned to create a bas relief, “Christ the Fountainhead,” depicting Jesus with the Samaritan woman at the well. A reflecting pool was located adjacent to the sculpture (but was later removed).

In 1930, in order to accommodate the swelling suburban neighborhood of Sugarhouse, a new LDS meeting house, the Edgehill Ward, was built a few blocks north of the Knaphus house. In those days local meeting houses were paid for by contributions from members of the local congregation (rather than funds received from church headquarters). Knaphus’ contribution to the building was a replica of his “Christ the Fountainhead” bas relief on the exterior of the building and two smaller bas reliefs in the building’s interior. 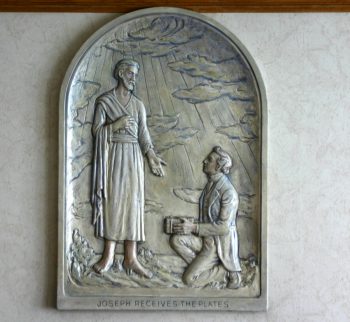 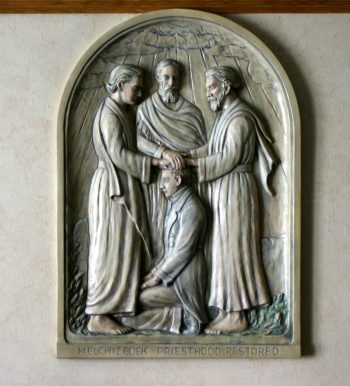 The exterior relief, still visible on 15th East (right across from Christmas Street — about 1750 South) became a local landmark. As local tradition holds, Mark E. Peterson, an apostle in the LDS church who lived in the area, used to stop and look at it on his way home from work. Even after he moved from the area he would stop by once a week to meditate. He related this to Bart Smith, who was the young bishop of the ward at the time, and told him to take care of the relief. Smith did so, but in the 70s, when the LDS church’s facilities management team decided to remodel the building, including stuccoing over the exterior, they said the relief would have to go. By then the Ward had a new bishop, David Cates III, and he decided to save the work by crating it and reinstall it after the remodel. To the dismay of family members, the relief was painted. Under the conditions of the harsh Wasatch winters, the paint job didn’t last and the mural was repainted in 1996. Today, the massive and quite stunning relief is badly in need of repair. Smith, who is once again bishop, agrees and hopes the church will make efforts to maintain it. 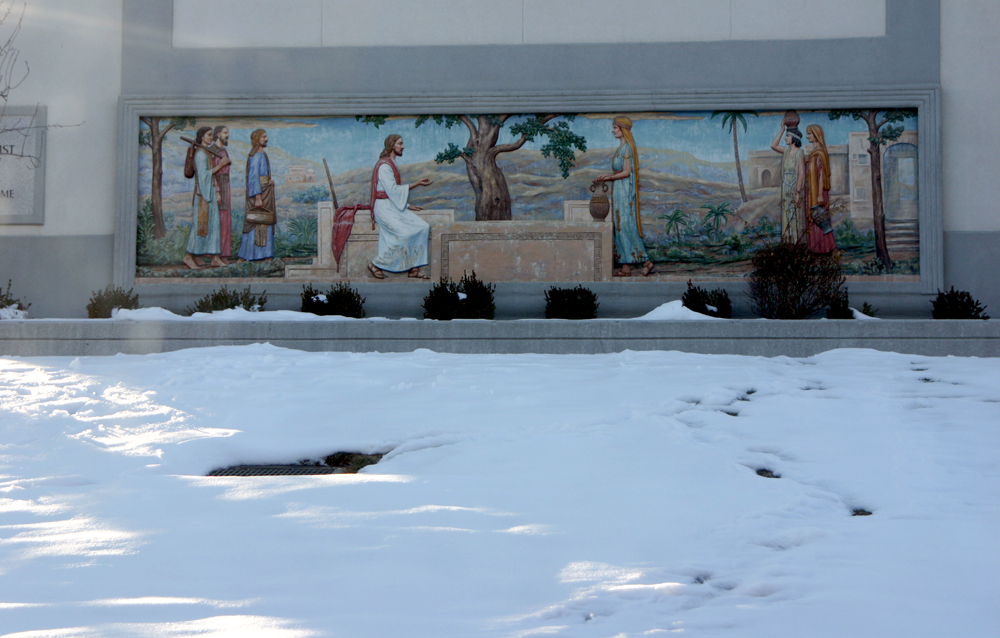 Arguably, the most famous of Knaphus’ work is the Handcart Monument located on Temple Square, the model of the recast that is heading to Norway. The original premiered in 1926 in the presence of two survivors of handcart treks and was approximately three feet high. Later, a much larger creation was cast and is seen by millions of visitors to Temple Square as a tribute to the Handcart Pioneers. 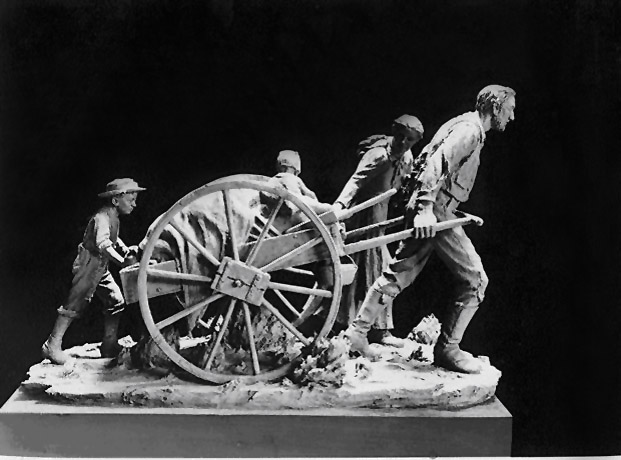 One of the most sensitive and personal stories recounted by Knaphus family members is the report of how he chose the design and model for the Angel Moroni statue that sits atop the granite pillar on the historic Hill Cumorah in upstate New York (for more information about the significance of Cumorah and the Angel Moroni, call any Mormon and they will have the missionaries explain them to you). Knaphus, struggling with the design for the angel, sought divine inspiration atop Ensign Peak. Rebecca, Torlief’s second wife after Minnie’s passing, recalled the result of Knaphus’ struggle. She says he told her he received a visit by Moroni, dressed “in a white military-type outfit,” though he didn’t elaborate more on the sacred and personal experience. After the visit, Knaphus created an entire series of sketches about each aspect of the form of the angel’s appearance. The multiple sketches that followed made his final choice increasingly difficult. Seeking assistance from the Almighty once again, the artist climbed to the top of Ensign Peak, accompanied by the many sketches, and made a prayerful inquiry. “He knew in his mind which image he liked, but wanted to know the mind and will of God … As he laid the pictures out on the mountain, a finger came and pointed to a specific sketch—the very sketch he had chosen. The next day he took the sketches to church headquarters where he laid the sketches out for the presidency of the Church and the Twelve Apostles, just as he had the day before for a divine source. Every single one of them chose the same sketch that a heavenly finger had pointed out less than 24 hours before.” 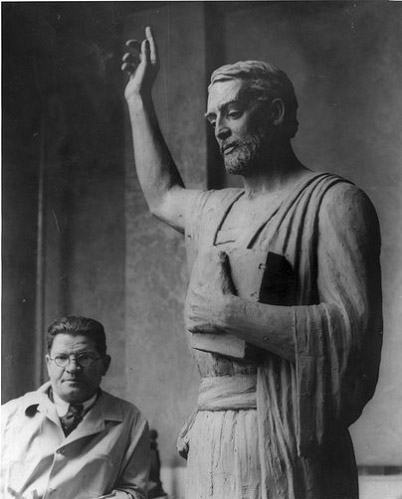 The rest of the story is lengthy but it included locating a model with the correct physique — Elwin Clark, a recent friend of Knaphus. Though Clark’s physique was correct, Knaphus felt he needed a different face. The family reports that Knaphus sought people off the street many times when they seemed to fit his requirements for modeling. One day, with the face of Moroni on his mind, he noticed an elderly bearded gentleman and followed him for some time. Finally approaching the man, Knaphus pleaded with him to pose for his statue. When the pair returned to the studio Elwin Clark was already there and the two models greeted each other warmly. The face Knaphus had found to match Clark’s physique was that of the model’s father, Hyrum Don Carlos Clark. The likeness of this unique father/son combination made its way into bronze and now sits atop the Hill Cumorah.

Other Moroni statues were fashioned by Knaphus. The maternal side of my family maintains that my great uncle, James H. Moyle, an attorney who served in the administrations of Woodrow Wilson (Under Secretary of the Treasury) and Franklin Roosevelt (US Commissioner of Customs), served as the model for the 11 ½ foot gilded aluminum Moroni that graced the top of the Washington, DC Mormon chapel (and can now be seen at the Church Museum of History and Art in Salt Lake). 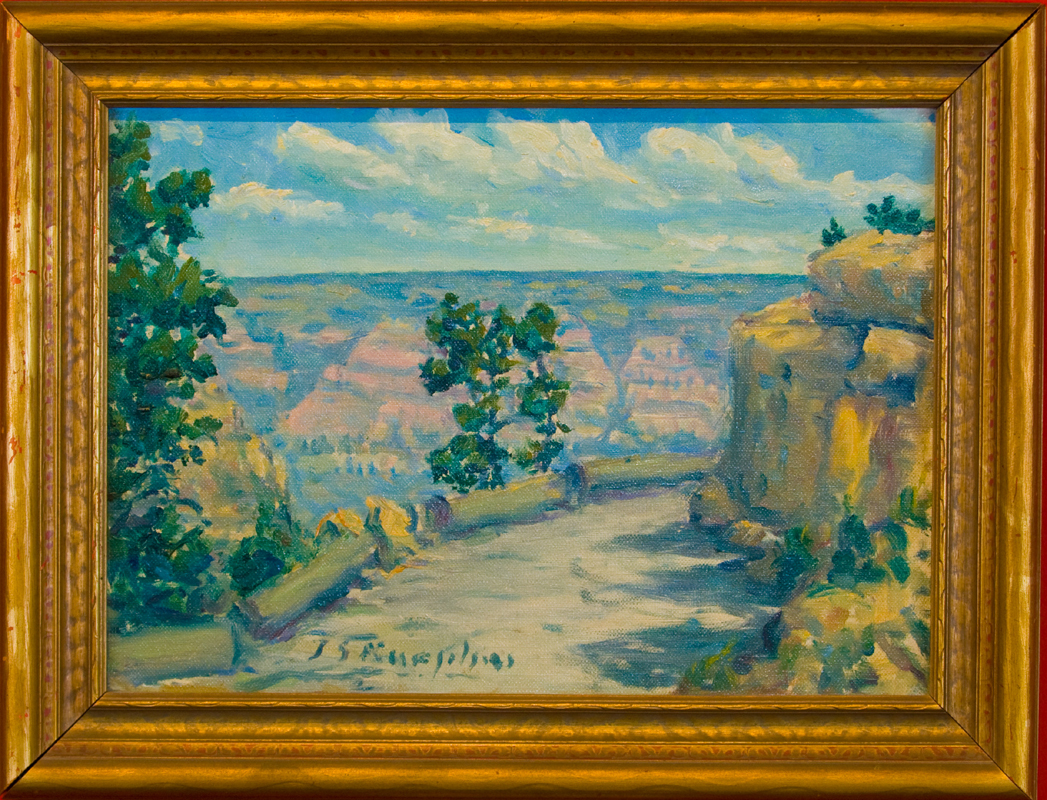 Though the church commissions are what made Knaphus famous, he was sought after for more secular commissions as well. Though he continued to paint — usually the landscape — his strongest medium was clay and his true subject was the human form, whether it be the stately and muscular form of a martially clothed angel, or the lithe form of the slightly draped female figure in “Asleep.” He executed busts of prominent individuals, including Governor Simon Bamberger, created friezes about mining at Bingham High School and the Kennecott Copper Mine Visitors Center, and did decorative painting at the Holy Trinity Greek Orthodox Church rotunda, and the Utah and Capitol Theatres. A final bronze monument worth mentioning is the “School Children’s Monument” which is situated on Washington Square close to the west entrance of the Salt Lake City and County Building. The statue, honoring children, was paid for by the nickels and dimes donated by the children of Utah. 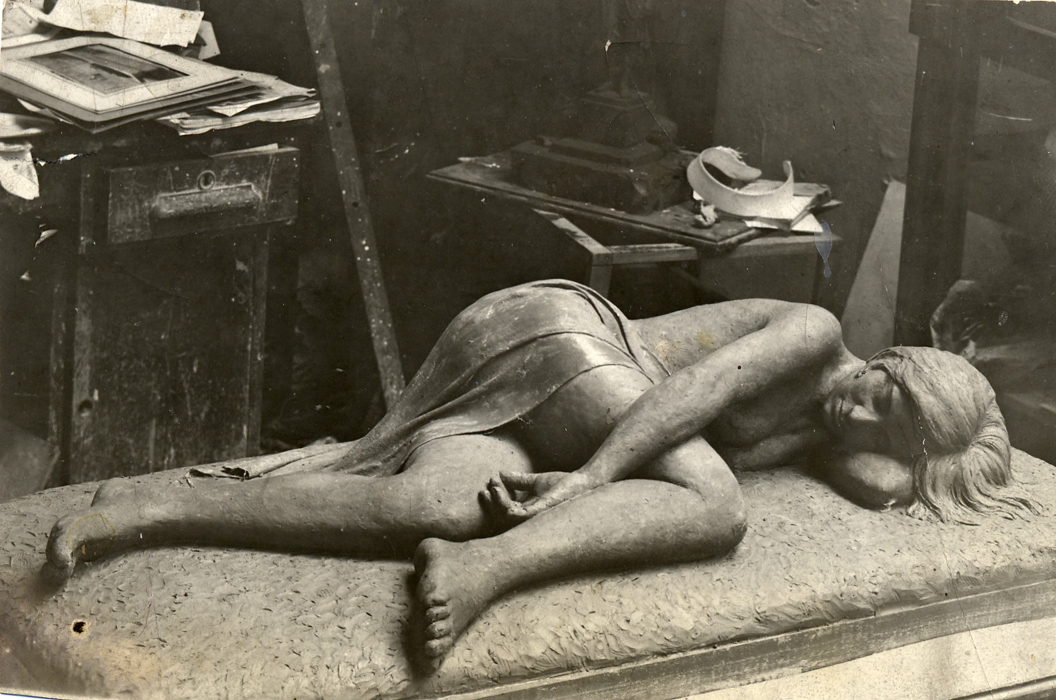 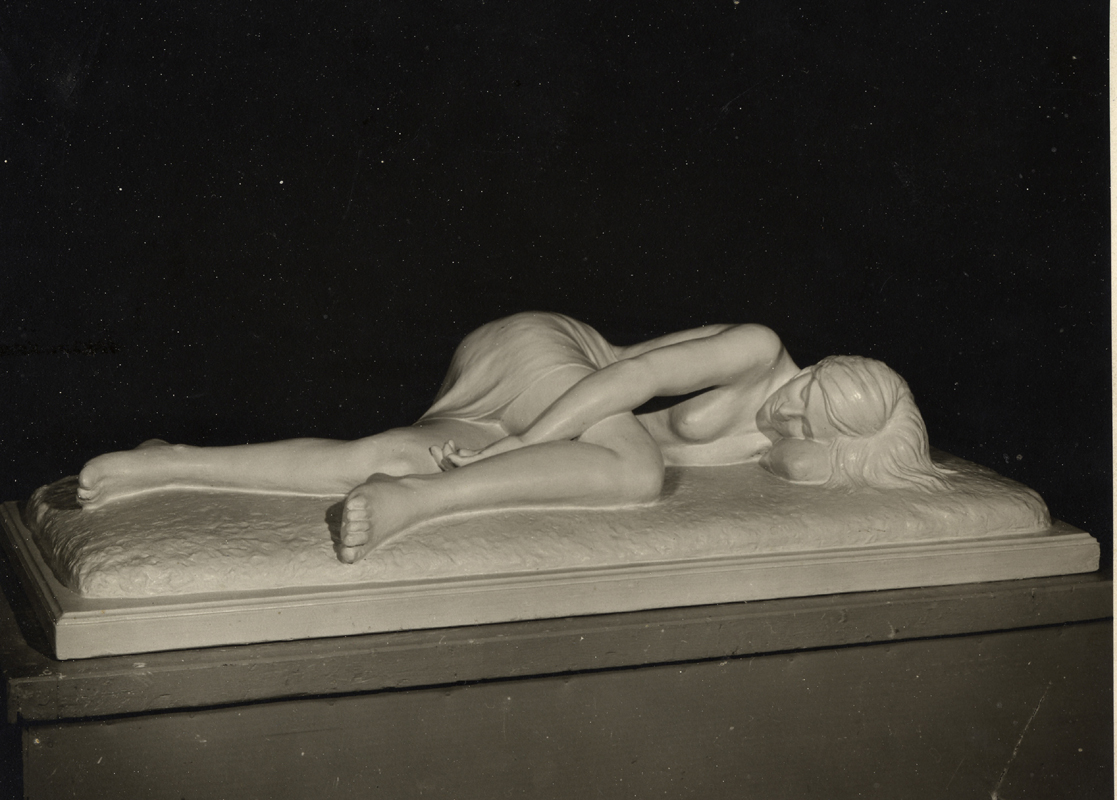 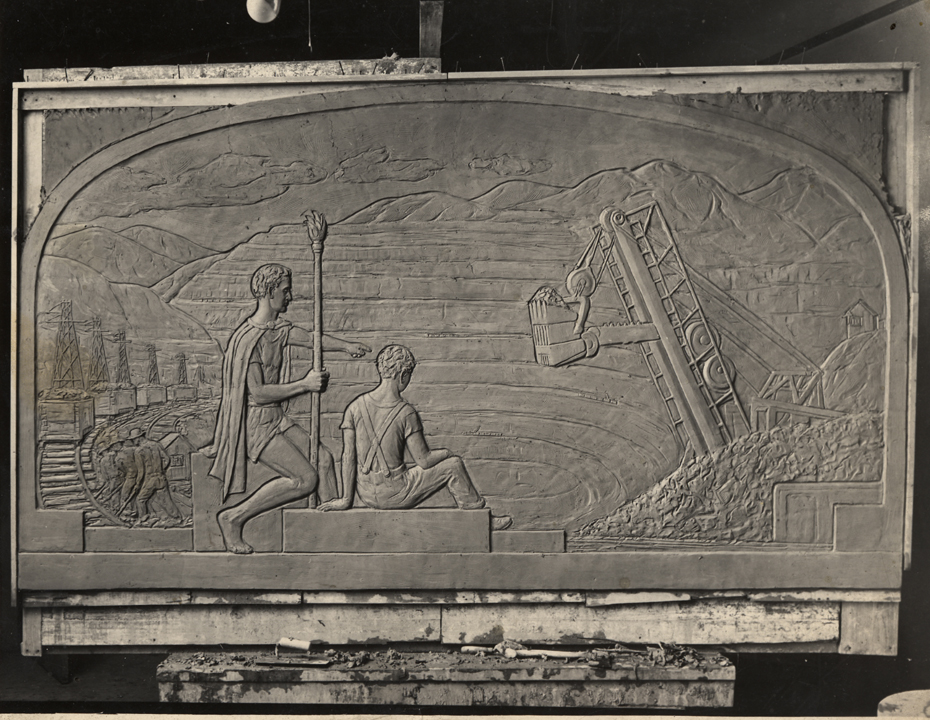 Although I have never owned a Knaphus bronze, a few years ago I did acquire a painting of one of his scenes of the Hawaiian shore. I naively sold it when I first became a partner in Williams Fine Art and my seller’s remorse was acute this weekend when I mingled with the justifiably proud Knaphus family and saw the piece staring back at me. When the next one comes along, I’m keeping it.