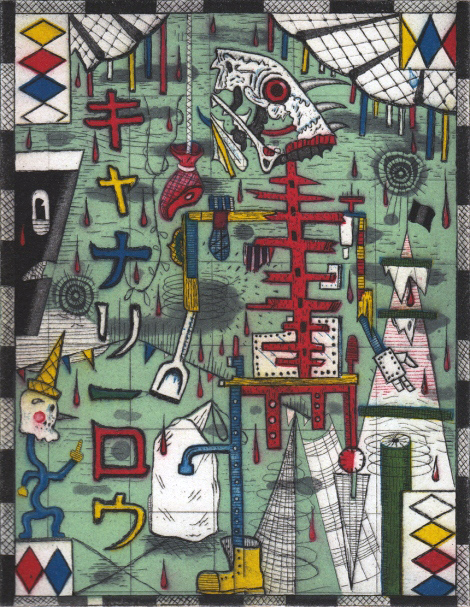 Chicago artist Tony Fitzpatrick is the type of colorful character that is welcome fodder for arts writers. In an art world overrun with degree-toting professionals who nip and tuck their way into stable careers while dreaming of blue-chip status, Fitzpatrick is a larger-than-life figure more at home in the Cedar Tavern than Sotheby’s. A self-taught artist, poet and playwright, former boxer and tattoo artist, he likes to hang out in seedy parts of town, keep company with the homeless and riff on art, literature, music and politics; he’s quick with an opinion and seems to relish a verbal brawl. All of which makes for a good story. It also helps that his art packs a punch.

That punch comes in small doses — collages roughly the size of a piece of notebook paper, and etchings half that size. The classic Fitzpatrick piece is a stage dominated by a central figure — pinup girls, mothers, comic book heroes, ideograms, animals and insects — surrounded by a menagerie of secondary signs. Every nook of his small surfaces is activated by these visual players — poems, line drawings, clipped advertisements, skyscrapers, maps, and smaller versions of the lead characters. They are not so much background as context — the whole world entering and exiting the collage’s stage. Fitzpatrick’s concerns are earthy, poetical, working class. He’s part of a dying breed, an avatar of the Catholic, blue-collar, iron-belt Americana that was such a mainstay in our cultural mythology — one that in the 21st-century is being superceded by an impoverished mythos of service-industry specters and suburban sun-belt sprawl.

This month, Salt Lake’s Kayo Gallery has shipped in eighteen pieces from two of Fitzpatrick’s suites of etchings: six works from the American Suite, etchings based on collages created in 2009 and 2010; and twelve etchings from Nickel Train: The Nation of Heat, Fitzpatrick’s most recent body of work.

The American Suite etchings are variations on collages that appeared in his 2010 book This Train and take ideograms from the hobo alphabet as their motifs. “I don’t intend to loot the hobo alphabet,” he says of the line drawings hobos used to warn of danger, indicate safety and suggest strategy. “I would like to change each symbol and further this language that nobody any longer speaks.” A simple V to indicate “Fake Illness to Get Food” is the sort of direct visual poetry and human concerns that speak to Fitzpatrick, but he embroiders the piece with tornadoes and rulers, amoebae and atoms, and a dozen other visual clues that embed the symbol in the fire of life.

The works in Nickel History: The Nation of Heat series are only a few inches in each dimension and represent Fitzpatrick’s latest works — he opened his own exhibit of the full suite on the same night as Kayo’s opening (he’ll be in town for the closing reception of the Salt Lake show). “The Halloween Parade” evokes lower Manhattan’s annual event where you can be anyone you want to be; “The Autumn Tiger” is a gold and orange anthem to his favorite season; “Return” remembers Octavio Paz’s refusal to serve as ambassador for a country that massacred its people, and the shock he felt at the violence and corruption he found when he returned; and “An Irish Story”  crowns the women who love and lament their men, “wild spirits tethered to reason by the thinnest of kite strings.”Listen to Fitzpatrick talk, or read some of his writings and it’s apparent that, like “Bazooka Hulk,” he’s got plenty of rage — at corrupt politicians, indifferent corporations, crooked gallery owners, and an art market soaked in speculative cash — but when you look at his art you see he creates out of love, not anger. He celebrates what’s at risk, mourns what’s been lost. The impetus for these pieces is a love of life and fellow man.
Pieces from Tony Fitzpatrick’s American Suite and Nickel History will be on display at Kayo Gallery through January. 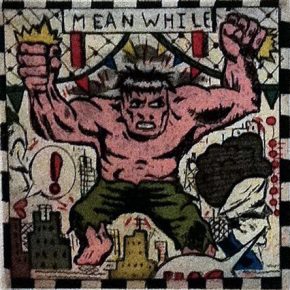 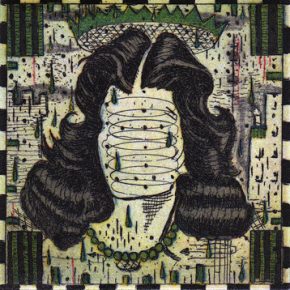 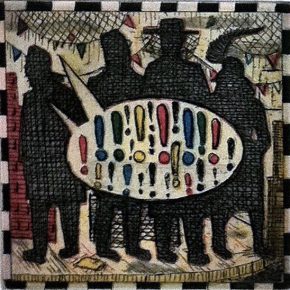 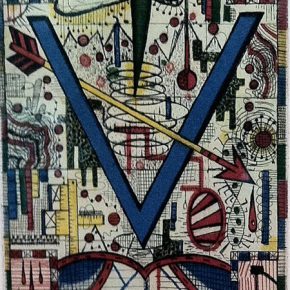 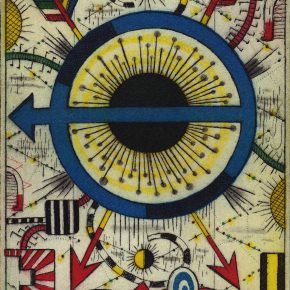