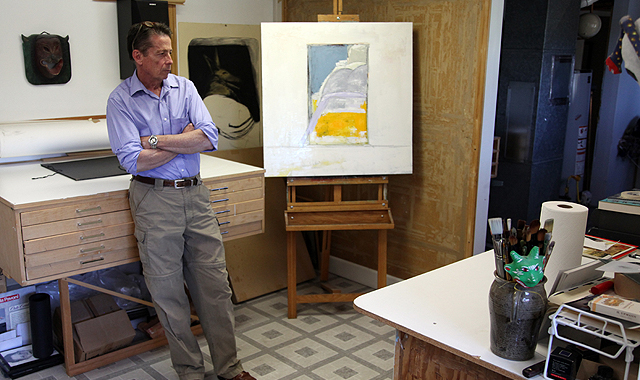 It might be easiest to call Tom Bettin a painter, but his studio practice is just as dependent on printmaking, sophisticated forms of collage and other multi-media approaches, making it difficult to define just “what kind of art” Bettin makes.  Whatever the mechanics, it is art that transcends rules and defies boundaries, while managing to create pure and evocative manifestations of the beautiful.

His new works, which go on exhibit at Salt Lake’s Phillips Gallery later this month, might be called vehicles of ontology, the branch of metaphysics dealing with the nature of being. Through color, value, shade, proportion, hue, balance and contrast, Bettin gives his paintings a pronouncedly metaphysical mood and imbue his abstract subjects with a true sense of being and personality. They are infused with honest emotion, and, as Bettin says, “You cannot have emotion without spirituality.” That spirituality, whether it is the artist’s interest in Native American spirituality and the situation of native peoples today, or his affinity for Zen Buddhism, is infused in his multi-layered works. 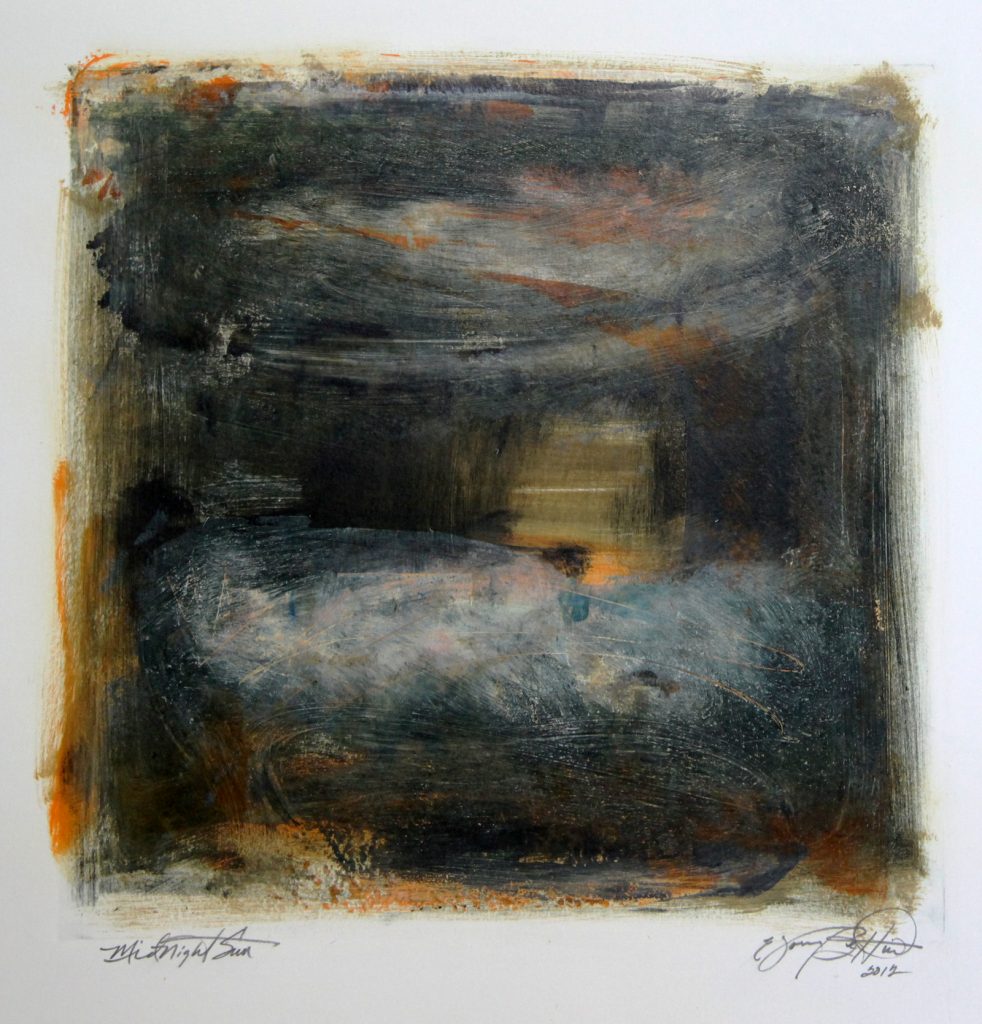 Bettin uses a monoprint process, in which the artist creates a series of unique images on a printing plate, and transfers them, through the press, to paper. He describes his time in the studio as “almost like a Zen process. I will be working on my print and I have to be able to not react, but act. If you are reacting, it’s too late. I can control the image to the point where I am laying down the ink on the plate, but when it goes through the press, the game changes. You have to be ready to go with the process . . . which leaves me pretty fatigued.”

The result is something that is figural, something that though abstracted finds itself being taken as literal. Color is used ontologically, for its most fundamental qualities; the same is true of tonality, hue, contrast, and iconography. These elements fuse in a composition that is allowed to manifest itself in the purest sense. 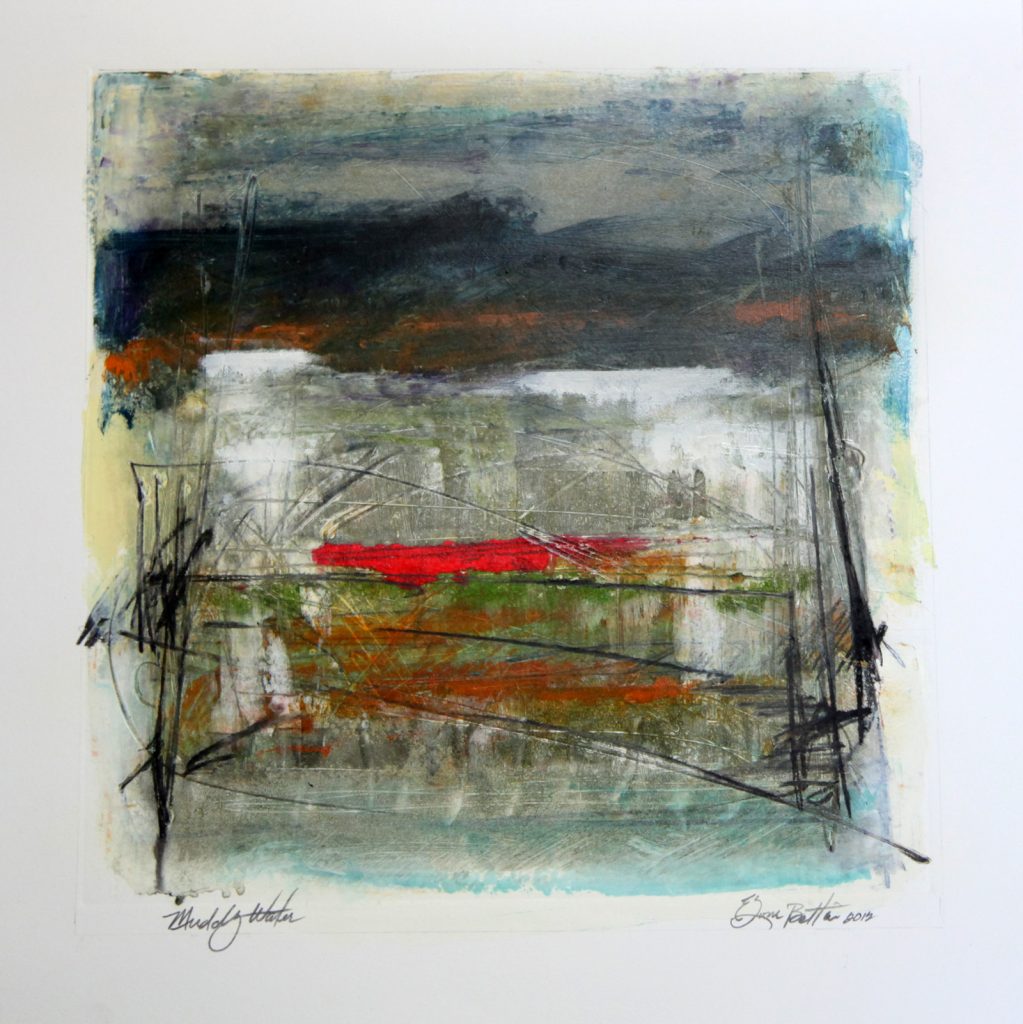 Bettin uses color to makes his abstract prints very definite, allowing his subjects to be read as literal. One might look at “Snow on the Burm,” and consider the subject — yes, this abstracted image “pulled” through the printer copious times, has a subject — transcending a generic landscape towards a universal one where color and temperament are sublime. The red is a deep vermillion that blends stunningly into a purple for an unbridled depth. The field of sea blue may be just that, an ethereal sea and the orb some kind of moon with a burst of firelight behind it, lost to the eternal expanse of sky beyond.

This empyrean scene gives way to the darker, moodier “Natural Thunder.” This piece’s dissonance of color has a rousing beauty. Bettin’s mix of artistic control and willingness to be at the will of the elements creates astonishing results, as one can see the stormy clouds and the surge of rain in a scene that captures the emotive verisimilitude within a stormy sea. The effects the artist creates are startling in their representation, even though the subject and title are never premeditated.

More hauntingly sublime is “Midnight Sun,” whose subject might recall the figural work of William Blake, as well as his sublime poetry.|8|Somewhere between image and verse we find Bettin’s “Midnight Sun,” which shines with a visual spiritual dynamism and energy. The image has a visual potency that speaks of dualism in a real universe, where nothing can hide from the reality of good and evil. This is poetically narrated using the image; they are one and the same in an iconography of color that has its say through an intense expression. 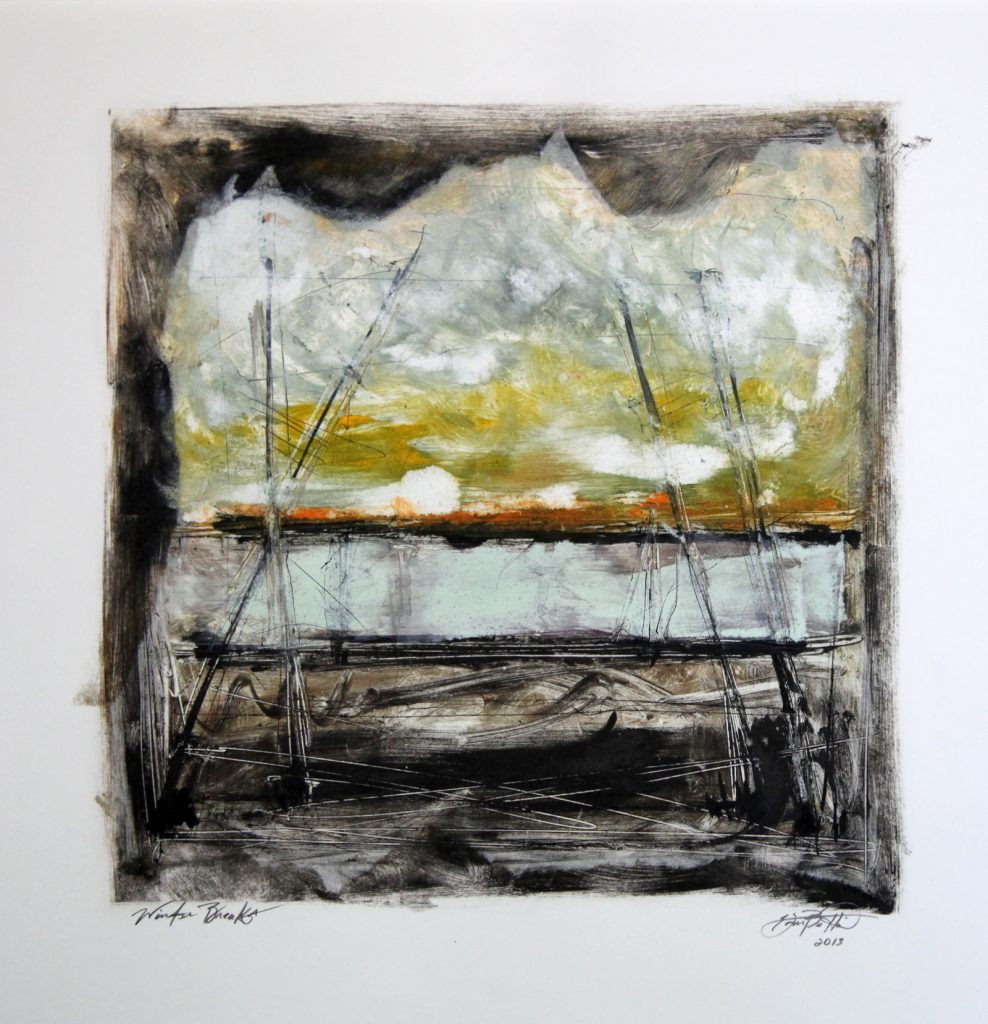 Another printmaking technique Bettin employs is Chine-collé, a Chinese process that uses multiple layers of paper, allowing the work to soak up more ink and create a bolder image. An example is “Winter Breaks,” where the results of this process ring true with the austerity and stark landscapes that exist as winter is breaking.|10| The viewer feels their way through the sketchy black at the bottom, with its suggestion of foreboding that might have come straight out of a Poe story, to find themselves in the middle region that is a watery blue, one that might be seen in late autumn and early winter, as the covered skies create a creamy murkiness that shifts to blue. And above, like the crescendo to a symphony, is the color of late autumn, and the light of winter, low and subdued with a definite golden hue. Yes, the image may be abstract, and yes, it is created without precise control; however, it reads like visual poetry telling of a moment in time that is hard to render in precise terms, rendered here magnificently.

In contrast to this scene is the very philosophical “First Light.” The image is encapsulated by a starchy green, a hue resonant of an earthy hearth in which the image is nestled. The base is a band of blood red, its depth pronounced by the charcoal black strokes that both cross it horizontally and frame it vertically, giving the print such definition. This red is one of awakening, of vitality, vividness and vibrancy.  It is a sanguine color, suggesting optimism and certainty. At the top in a like horizontal band that bows inward is a stripe of gold yellow.  Here too is a color that encloses the central sphere with a portent of good cheer. A strong line of charcoal black runs through it giving it strength and fecundity to balance it with the sturdy crimson at the bottom. Then, in an act resonant of yin and yang, a stripe of black makes a diagonal sweep through the center from upper right to bottom left arching upward.  The upper plane created is dank and colorless. It is muted and seems dusted with the residue of black but lacks definite hue.  As if bursting and pouring downward from within the arch is pure white, which disseminates towards the red, a similar dank colorlessness.  This manifest “First Light” has the semblance of newness and is born into the zone of nothingness that is broken by the crimson of opportunity and the gold of life. It is a philosophical painting and it is hard to get around this fact, so strong is the color and iconography.

In the balance that Bettin creates ubiquitously in these works, the viewer is allowed to witness the incorporation of emotive spiritual expression that possesses the qualities of metaphysics understood through ontology. More like a disciplined philosopher than an expressive painter, Bettin uses his media precisely, rendering his images meticulously. They put the viewer on true paths to finite ends, which are rewarding in the visual journey of discovery. 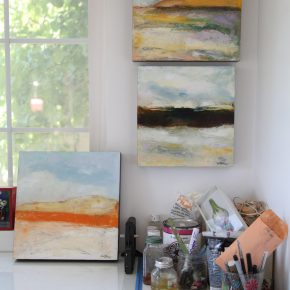 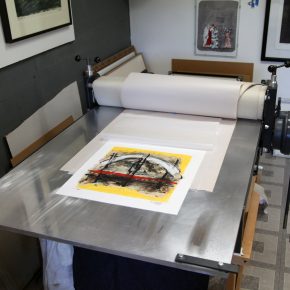 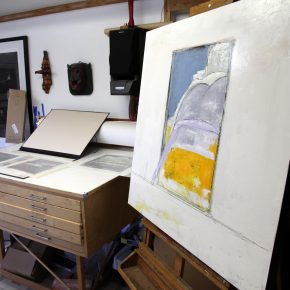 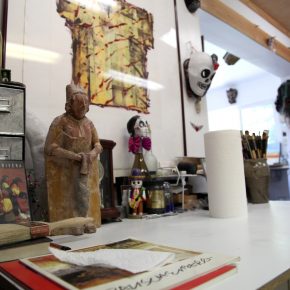 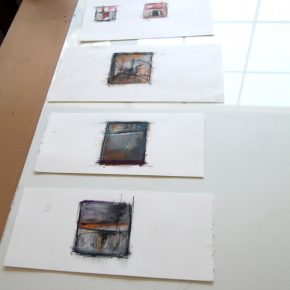 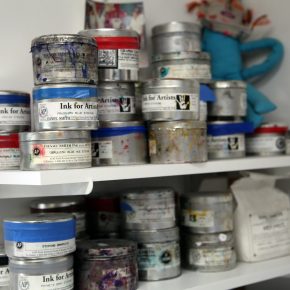 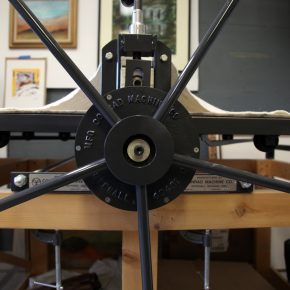 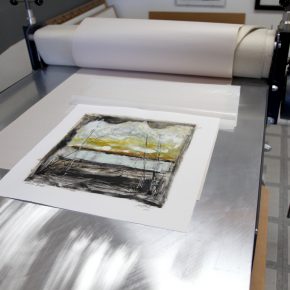 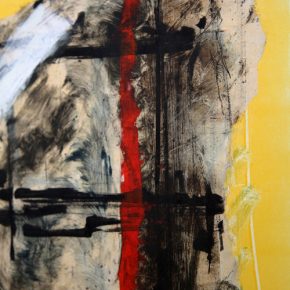 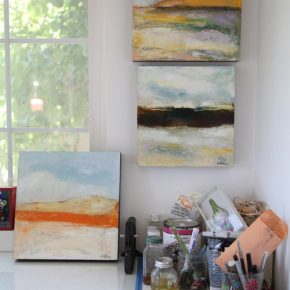 Tom Bettin’s new works will be on exhibit at Salt Lake’s Phillips Gallery June 21-July 12. An artist’s reception will be held Friday, June 21, 6-9 pm as part of the Salt Lake Gallery Stroll. Showing at the same time will be works by Meri DeCaria and Connie Erickson.