Timeless Reality in the Painting of Russell Case

There any number of ways of looking at the painted world of Russell Case, but perhaps the most important one is that he paints real places.

This fact was brought home to me while visiting his current exhibition at David Ericson’s splendid new gallery in the Avenues. First, a quick and unsolicited comment on the venue: I have long advocated galleries such as Ericson’s old place, a Victorian-era home with all the parking challenges inherent in its inconvenient downtown location. What I liked about such galleries is how well they showed off how the art might look in the visitor’s own home, with its cramped and cluttered spaces. What Ericson’s new location offers, on the other hand, is enough light and clutter-free views in a context large enough to permit stepping back to get a good, long — in both senses — view of a painting or sculpture. 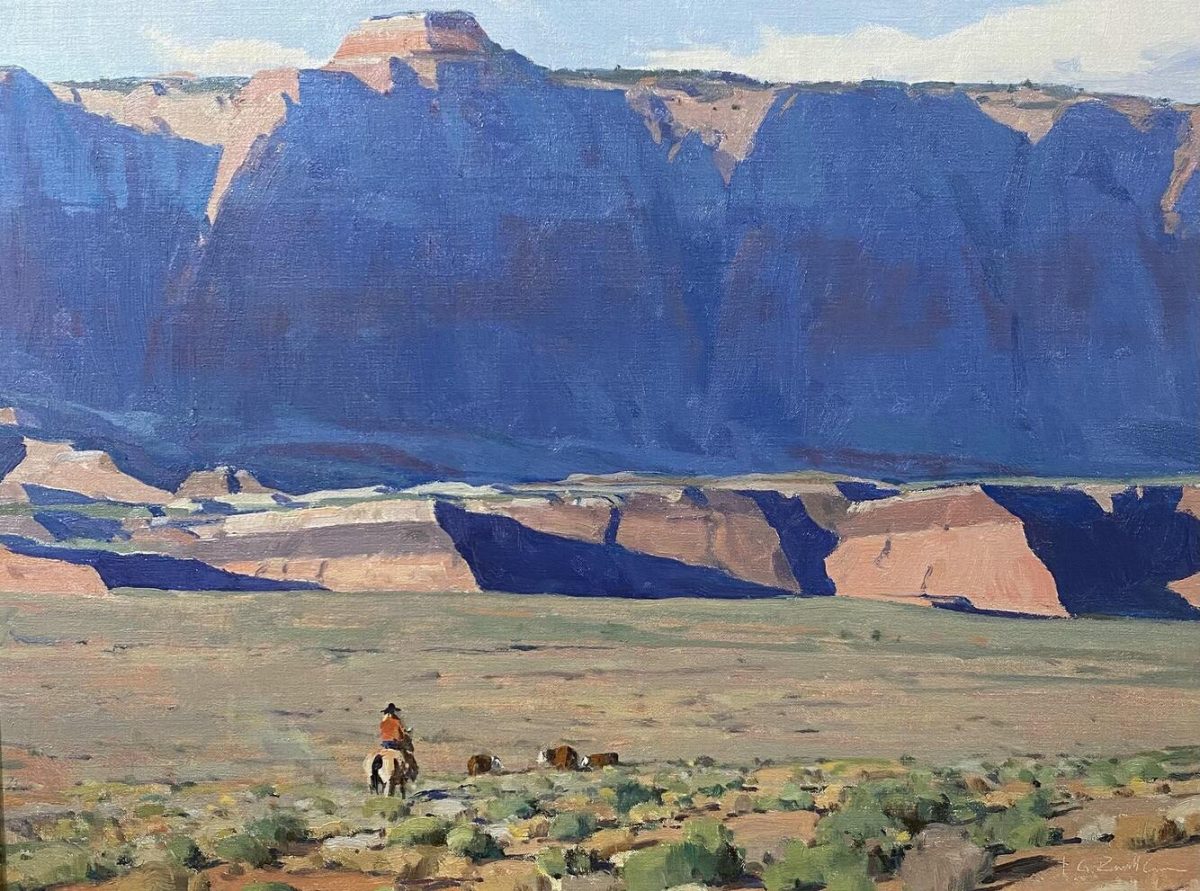 So, Russell Case. Take “Sandstone Shadow” — if not the poster child of this show, then at least its postcard representative. First off, the title, with its reference to sandstone. It’s a common misapprehension that the greatest geological demonstration on Earth, the topography of Utah, is comprised of granite. There’s even what my colleagues at Snow College liked to call a “residual oralism” — “take it for granite,” that speaks to the confusion. But Dead Horse point, with its view back through several hundred million years of planetary history, is not made of granite, nor are the cliffs, canyons, arches and hoodoos that draw amazed visitors from all over the world. It is true that occasional intrusions of volcanic magma, the source of granite, are found shot through places like the Wasatch knolls, but none of the five successive Lakes Bonneville was full of magma. They were full of ordinary water, in which dwelled tiny creatures who laid their silica-rich bodies down in layer after layer for those many millions of years, until they created one of the many great sandstone deposits on our planet. Sandstone has qualities of which many are unaware. It can be incredibly hard and durable, so it weathers slowly, thus explaining both the many elaborately carved features we see today and why they are still standing. Stonehenge is made of sandstone. So is the red rock country, without which the Southwestern genre of painting would lack its primary glory.

Case has shared with his public that 90% of “Sandstone Shadow” is painted with three basic colors, using a color system that pairs a primary color with two related secondaries, in a system that is the visual equivalent of musical harmony. And fully 50% of this painting depicts a sandstone wall seen at the time of day when it’s in shadow, the sun being not “over the yardarm” so much as behind the mountains. How that was painted, with so much detail suggested in what is, after all, darkly mottled brush work, is something requiring the alternation of close and distant viewing — which again the gallery permits. But the title refers not to this large area of shadow beneath a narrow strip of sky. It refers, rather, to a series of massive, broken stone blocks lying in the mid-ground, where they represent the crumbling border of the identically-layered massif that we see in the background. These shattered and tilted remnants, at this time of day, cast diagonal shadows on a more human scale than the cliffs behind them — a sequence that continues with the lone cowboy and his cattle in the foreground. Almost four centuries later, the three-tiered system of the French landscape painter Claude Lorrain, where background and foreground frame the eloquent middle distance, still speaks to us. 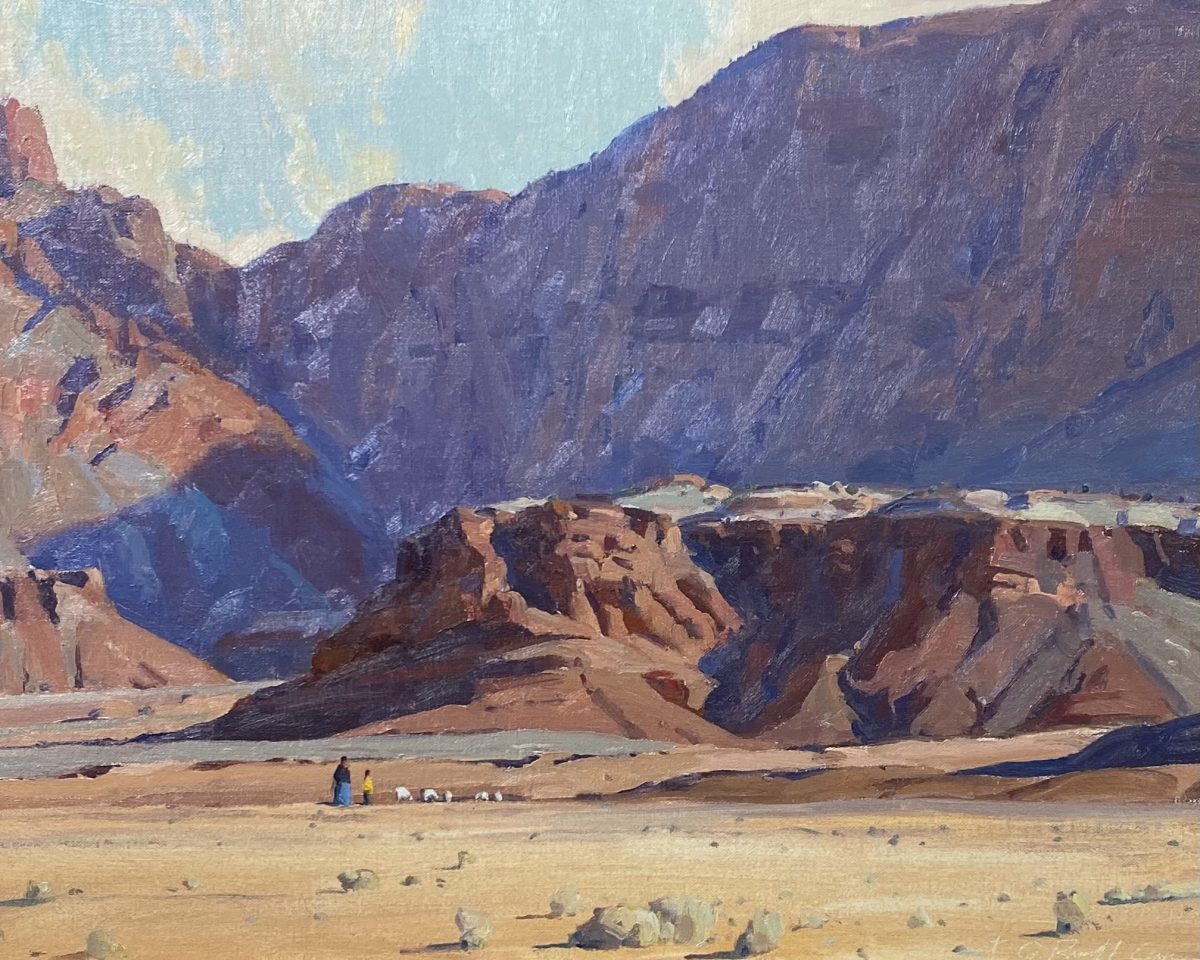 Case has also explained that he includes his often solitary human figures primarily to lend a sense of scale — of the vastness of the West — to his scenery, and indeed, it is primarily in works with vistas, like “Sandstone Shadows” and “White Sage Wash,” with its (Navajo?) mother and child leading a column of sheep out of a draw, or “In the Shadows,” with two flat-roofed adobes beneath a couple of trees, that such signs of isolated life appear. But there is another side to the western world of Russell Case, and it is here that the reality he paints tests and proves itself. These are the modern views, which offer a different but equal sense of timelessness. Most are painted around the town of Mantua and its reservoir, and it was seeing these small gems before their titles were added that impressed me so much, for they felt so familiar, not in a generic way, but specific to a town and lake I have looked forward to eagerly, passed through, and delighted in numerous times on the way to and from Logan. Sometimes it’s necessary to hear as well as see something to recognize and connect it, and here it took contemplating Case’s vision of the place I’d always known from the roadsigns as “Man-two-uh” to realize that it is actually the exotically-named “Man-a-way”: a place with roads and ranches as distinct as they have become familiar. Box Elder County has a place in Utah art greater than and disproportionate to its practical dimensions, and Russell Case appears determined to keep it that way. 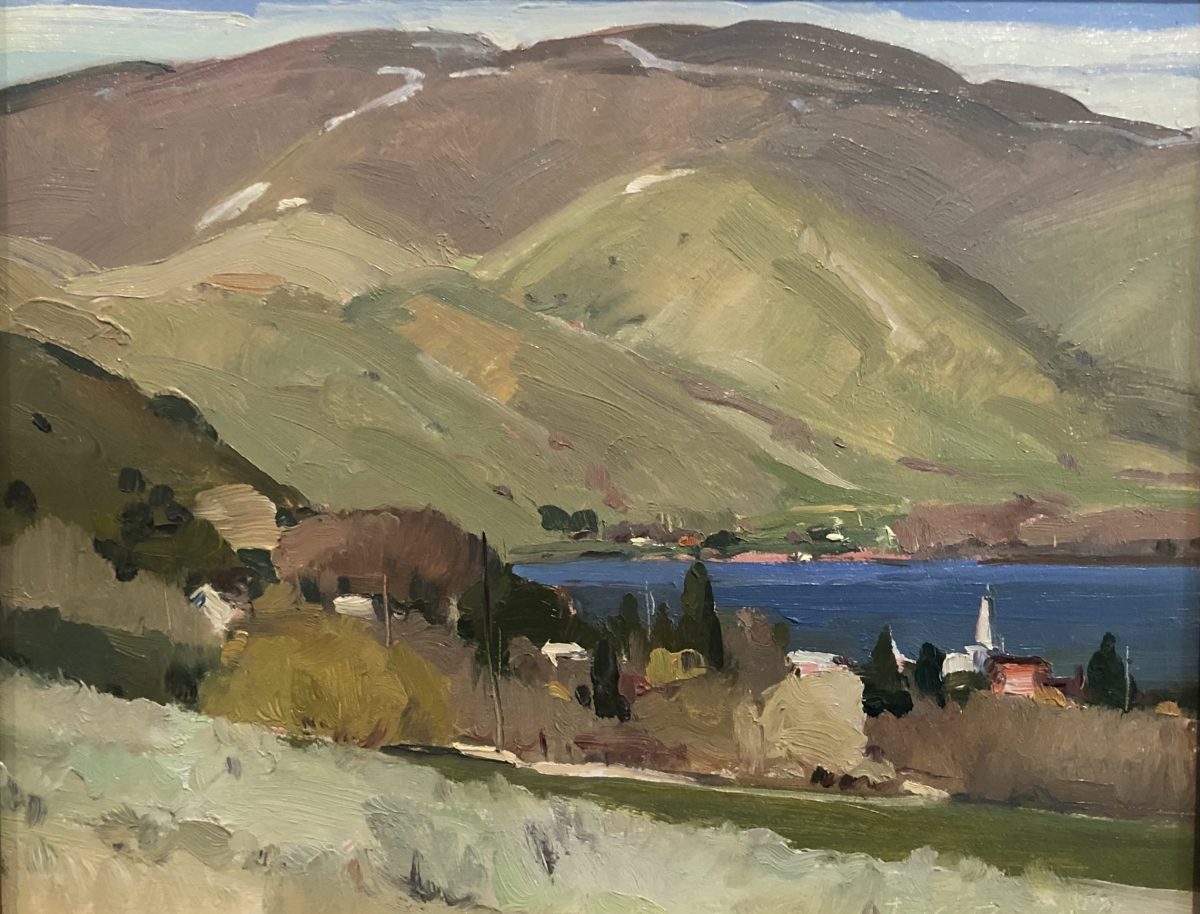