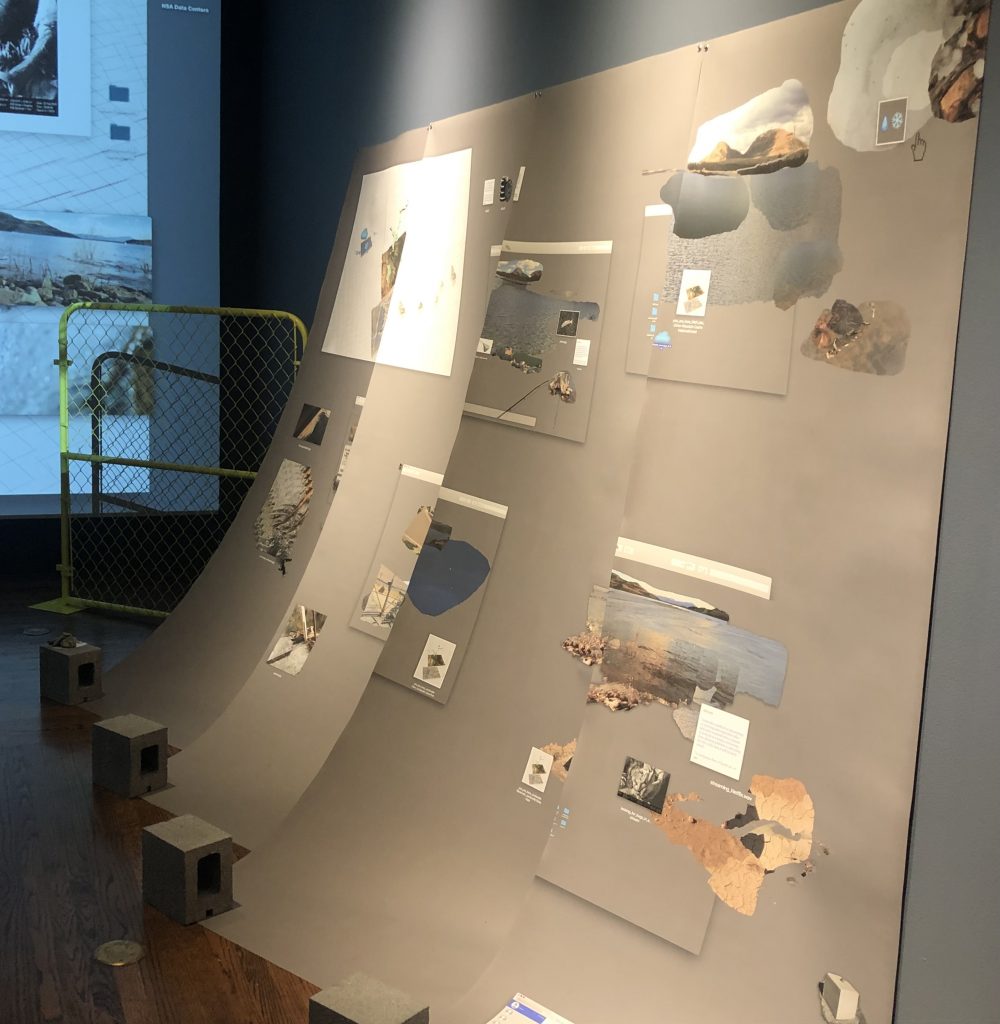 View of Tiana Birrell’s installation, the weight of a cloud, at the Utah Museum of Contemporary Art

It was recently calculated by the University of Cambridge that the amount of electricity required by Bitcoin in a year would power all the tea kettles of the United Kingdom for 27 years. This startling assertion brings to mind two facts, both of which are part of the weight of a cloud, an exhibition by Tiana Birrell currently showing in the appropriately named AIR (artist in residence) Gallery at UMOCA. Eventually, Birrell wants her audience to know that the way data is represented can effect how it’s perceived, and thus essentially what it means to them. But first, she argues digital life is anything but the bargain its masters have convinced us to believe. Instead of an insubstantial burden, those invisible digits that increasingly make up our world weight as much as, perhaps more than, the reality they replace.

Birrell’s focus is not cryptocurrency but the Cloud: the worldwide digital network — vast, oceanic, accessible from seemingly anywhere —that provides everyone unlimited data storage and access. Thanks to this cloud we can go almost anywhere and rendezvous there with our work, without risk of losing it in transit. We can each carry in a pocket a library of photographs numbering in the thousands, possible not only because all we carry are binary magnetic zeros and ones, but more so because all we really hold are “thumbnails,” while the actual photos are safely remote on the cloud. And it’s so cheap that our cellphone carrier can easily bury the cost in a monthly fee. 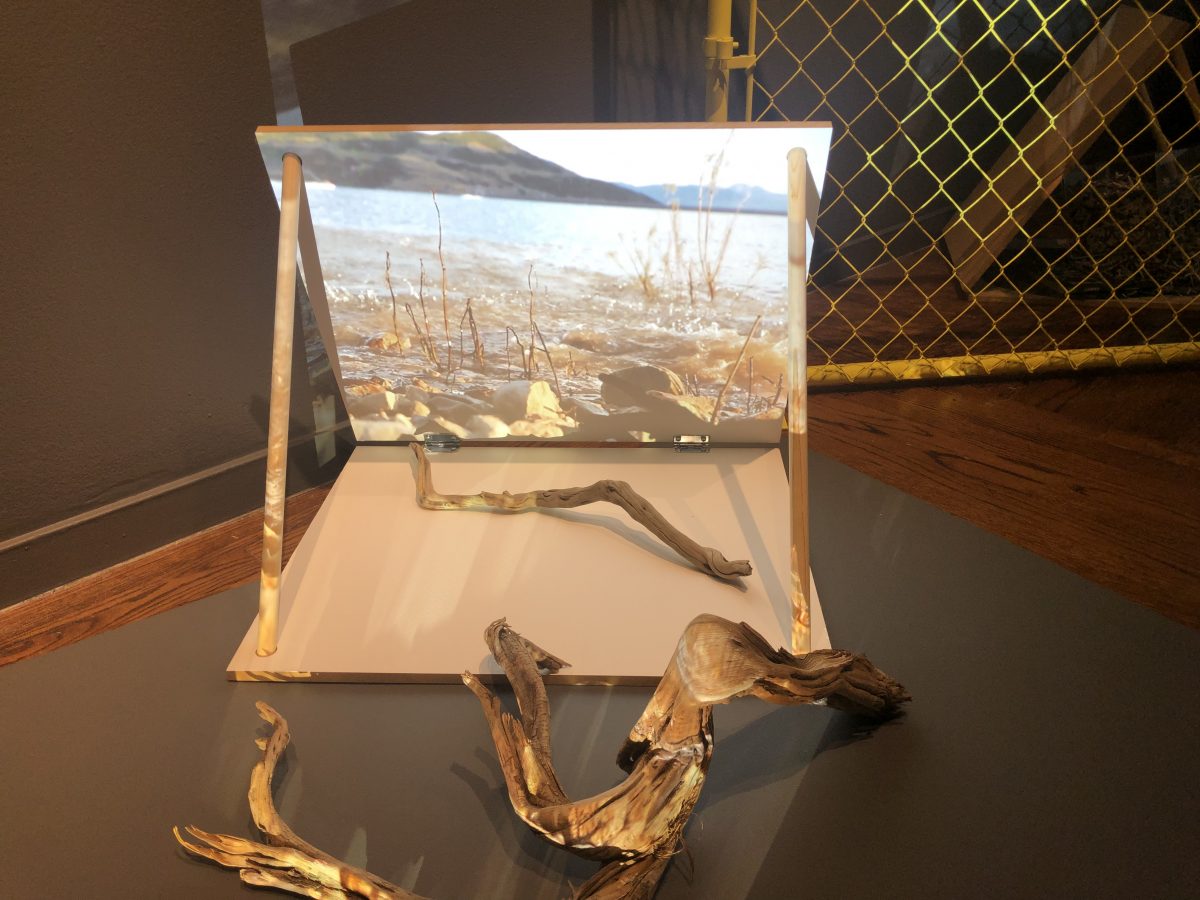 Of course that’s arguably the great flaw with the cloud: its many deceptions. It’s not actually any of the things it pretends to be. Ask Jennifer Lawrence how secure it is. Those photos we treasure? They’re irremediably degraded by irreversible compression that’s never really discussed. And what about the cost? While the resources consumed by the Cloud are routinely converted to colossal quantities of dollars, we here in Utah should be more concerned with the actual form they take. According to Birrell, the NSA facility in Utah, a secret installation that made news here a few years back when its existence became public knowledge, uses 1.7 million gallons of water a day. Unlike the 65 megawatts of electricity it also consumes, this water cannot be wired here from some wetter state. Birrell calls it “a water-sucking panopticon in the dry landscape of the mountain west.” A panopticon is a form of prison in which the inmates in theory are being observed at all times through a one-way viewing system; since they cannot know when they are being watched, they learn to police themselves for the benefit of their jailers. Since we don’t know when we are actually using the Cloud, she is suggesting, we donate our water even when we don’t know who benefits, or even that we’re doing it. 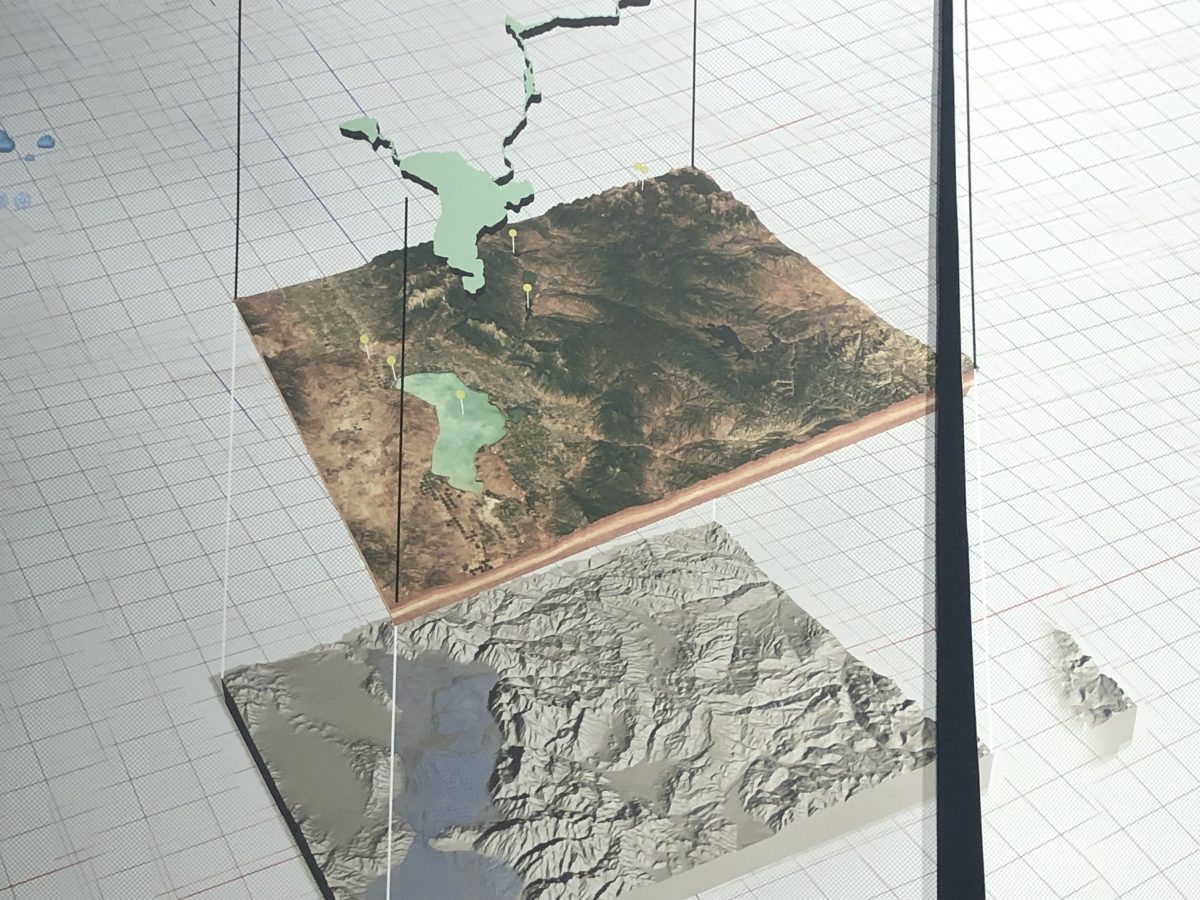 In person, the weight of a cloud presents the most original approach to installation art in some time, one that falls somewhere between a packed family garage and a photo of King Tut’s tomb: either one appearing to be arranged not to be accessible, but to maximize storage space. Along one wall, large charts are cut and folded like the Oquirrh Mountain range, showing how the redundancy and ungraspable dimensions of data overcome the details, no matter how intriguing they may be. Nearby, a video projector reproduces the experience of a lake shore while recalling the modest reality of water, which is that while making life possible it remains mostly underfoot. Speaking of humility, one of the best parts consists of half a dozen large bags of shredded paper, containing who knows what now forever hidden truths. Some portion of whatever they no longer can tell us sticks to the viewers’ shoes and is tracked out the door. Like Hansel and Gretel, we can hopefully find our way by the diminishing trail of those who’ve gone before. Like the map of access points to the Cloud, printed on clear plexiglas and casting a shadow that doubles the words and makes them almost impossible to read, everything seems calculated to show that the most legible facts can be layered over each other until it all becomes inaccessible.

I don’t believe in Tarot, but I enjoy the idea that the ancients knew better than to trust their wisdom to the virtuous, so they embedded the truth in their vices: in games. Anyone who ventures with a child’s open expectations into the playhouse that holds “the weight of the cloud” will emerge smarter, having stumbled across something of individual significance: something that we all should know.