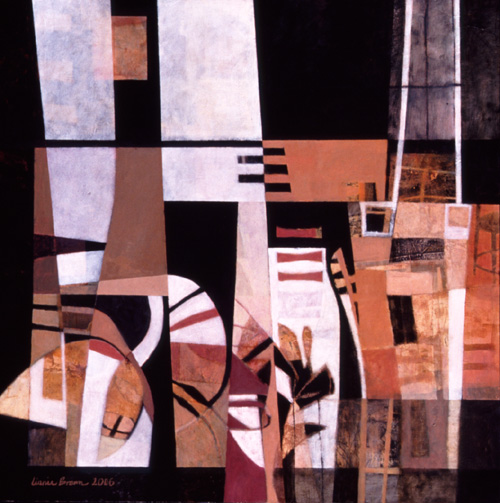 Entering Art Access’s Access II Gallery, where Linnie Brown’s Landmarks: Recent Works is on display through April 13th, one might ask, “Has Picasso gone crazy?” No, Picasso has not gone mad, but Linnie Brown has lucidly painted — constructed (as cubists do) — a series of abstract works which are a provocative glance at a juxtaposition of two very different elements of the contemporary environment: the natural and the artificial.

How, one might ask, is this aim unique, as much of the art of today questions this contemporary landscape? What makes this work unique amongst the rest? What is significant about Brown’s work is her masterful use of pure abstraction to convey a theme in which may be read as an intuitive and inventive insight into what she states is a “struggle to find the self into two circumstances and balance them out?” Brown’s is a strategically articulated cycle of abstracted works using cubist-like shapes, contours, lines, color and light. Like the works of Mondrian or Albers, these works have a classical sense of unity and balance; and while each is particularly unique amongst the rest, the exhibition achieves an overall unity. Though her palette is subdued — earth tones primarily, and even a grisaille — they are equally balanced, ordered and cohesive in form and color; and in addition to this, her contemporary meaning is uniquely conveyed.

Brown’s affinity with pure abstraction ends here. Often when faced with a Motherwell or a Still, one is open to free association, an open dialogue between the painter and viewer, but not so with Brown. Hidden amongst these paintings there is an intended, distinct association, which the viewer may perceive and comprehend while contemplating Brown’s work. Brown adopts many modernist image-making techniques in her work but uses them for her own end. Like Picasso, she incorporates collage and elements of figuration. And like Rauschenberg she inserts “found elements” but without his aim at transforming rubbish into fine art. No, Brown assimilates similar practices, yet with a specific aim in mind. Brown has something poignant to say about the world in which we live through her paintings, as purely abstracted as they might seem. Through the nature of her constructs, she is attempting to “balance natural and man-made imagery,” she states.

This distinction is not blatant, but with careful scrutiny one may arrive at the full impact of what Brown is aiming toward. Incorporating into her constructions elements that are themselves abstracted, Brown addresses her dialogue. First, Brown intersperses into specific works the artificial collage elements. Maps, representing the very elements of the human-made landscape, make a distinct commentary on the artificially contrived demographics of modern society: How do people, societies and groups meet, intersect, unite, come together, even separate? This aspect of her incorporated work navigates the segmented spaces upon which all reside, regardless of nationality, race or other distinctions. These cultural and societal designators communicate with her painterly forms into which they are incorporated — a network which is harmonious. Also incorporated into her works are fragments of newspapers — that which informs, empowers, provokes, frustrates and activates the reader (including the reader of her abstractions). They seem almost imperceptible to her network of articulated shapes, yet they are the driving force. 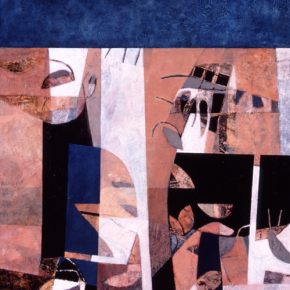 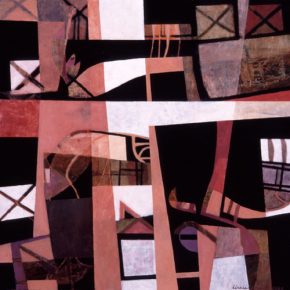 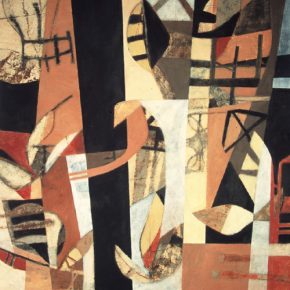 An organic element is the counterbalance in other pieces. These fecund elements, which creep in amongst the abstracted features of the painting, are not readily apparent, isolated as they are amongst the distinction between the artificial and human made. Abstracted elements — organic forms of leaves, branches, twigs — speak of a world without human intervention, a world of the natural. Brown does not include the artificial and the natural in one piece. The natural and the artificial are individualized in separate works, yet, in the exhibition space the artist allows each to speak alone as well as contrast each other. As a whole, as a cycle, the works achieve their aim. Brown is not attempting to dictate, contradict or conflict; as the works are unified as a whole, each unique and of itself, Brown’s is a positive statement on the management of the two elements as they exist in the whole of her work and as a representation of our world.Such a statement is accomplished in the unity of the cycle. As the homogeneity continues throughout, Brown has made reference to the two habitations co-existing. Yet her statement is not an arbitrary one. How? As the artificial element fits into one, as the natural fits into one, and as both fit into a whole, so do Brown’s themes fit into one and one into the cycle of the whole. In the exhibition’s unity, Brown has demonstrated how the human-made and the artificial may fit together. The success of Landmarks is due to Brown’s ability to mirror her thematic concerns with her visual explorations. The natural and the artificial both are an extension of her abstractions that converge into a synthesis, resulting in an optimistic view of the world as a harmonious whole.

Like a freeway with its loops and interchanges, carrying with it the souls of those who ride it, Brown has hypothesized how the artificial and the natural may be as one.