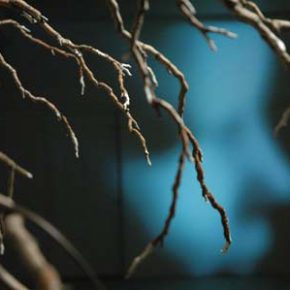 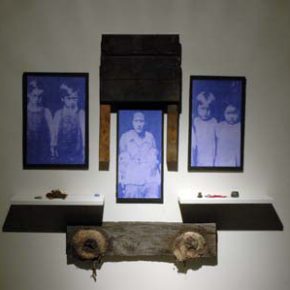 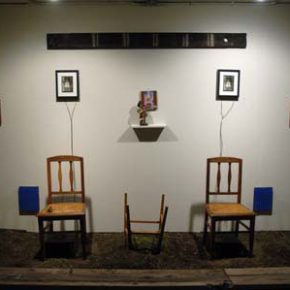 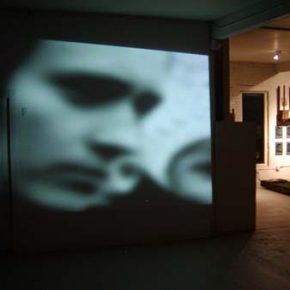 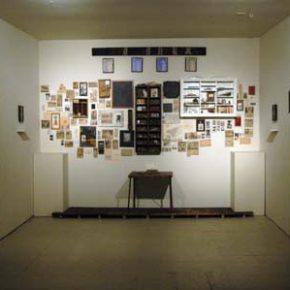 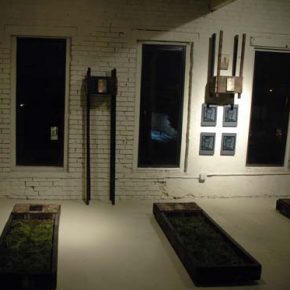 Aerial is a word that sometimes means airborne, in flight, or from above. This implies a transitive state; the period of time when an object is neither here nor there—suspended between the place or state it has left and the one in which it will arrive. There is a large degree of ambiguity surrounding this matter—the outcome is often unknown, and that exact moment of inertia when the shift occurs is difficult to capture, much less explain. David and Mathieu Ruhlman have made a subtle but persistent attempt to convey the strange moment of exchange between animate and inanimate through their joint multi-media installation Aerial.

As part of the Artist in Residence program at The Pickle Co., the Ruhlman brothers had access to a space rather conducive to their concept: human relics left from another time that carry an enigmatic and vague legacy. Somewhat secluded upstairs, the dark sobering openness of the area is unavoidable; upon entering the viewer is immediately immersed in the both tranquil and unsettling environment. Displays, like mini-alters, are set up sparsely; allowing the indiscernible, stirring sounds from various installed speakers to stretch the length of the space and mingle together. Viewers must walk through dim areas of vacant space to view the different sections. This forces them to complete a somewhat eerie, intriguing transition themselves. The overall effect is an austere, mysterious atmosphere that is reminiscent of a supposed afterlife, or some moment in between. Some noticeable elements consistent throughout the piece seem cryptically symbolic: duality and multiplicity of people and images, replication and mirror images, and the unexpected use of a royal blue—both in lighting and pictures.

Although the piece overall is not really linear, and can be viewed by any route, it does seem to have a center—the cove in the middle of the room that contains a collection of clippings and strange random objects. The two opposing walls are mirror images of each other, with identical thin vaulted tables below matching paintings. Beyond the tables are identical blurred pictures of an aged, faceless couple. The cove is a little uncomfortable and foreboding– like many areas of the installation the viewer feels almost like they are trespassing…entering into a space of reverence for someone past and unknown, yet almost familiar. Along the top of the back wall is row of repeated photos of an anonymous man that also form a mirror image of each other, the one in the center printed in a cool, ultramarine blue. Below the pictures is a composite of newspaper clippings from the early to mid 1900s that tell a myriad of strange and alluring stories…yellowed with age and creepier for it. Many tell of multiple children born to one mother, another tells of a child being locked in a closet by her parents for four years, and one of a policeman slain for being a witch—all accompanied by rather disconcerting pics. With these peculiar tales of murder, deformity, and death the culmination of the clippings forms a collective history—one that becomes almost more occult with the passage of time. Today we are left with only these carbon-copies, imprints, of the experiences recorded on old tattered paper with no verbal explanation to verify them. A separation is created in this way, and within it a strange fascination.

Throughout the installation are odd, precious little weathered objects placed with specificity to create shrine-like scenes. Inherent in these objects is a story or meaning that has been obscured; time and ownership change and increase the mysticism of these things left over. This is what is compelling about antiquated items. Spoons, dated address books, old lumber and photos all span time and depersonalize the concept of possession. How do they resonate with us now? What happens to possessions years after a person has lived? They are rendered meaningless, yet, in their ambiguity are fraught with meaning…the people who knew their uses and histories are not available in this context to pass the myth along. If there is an intrinsic communicative quality to them, it must exist in some other form—which may be beyond the scope of human perception. The tables, chairs, and grave-like structures, made to feel like antiques, are infused with sound; hidden speakers project ambient, quasi-familiar noises and attempt to amplify some after-echoes that these inanimate pictures and objects are proposed to radiate. The low-level, mostly unrecognizable sounds emphasize the absence of speech, and the resulting necessity to utilize alternative methods of comprehension.

The audio seems especially poignant reverberating off the vast walls and spaces surrounding the four grave-like structures along the west wall. It is also a little disquieting. This is another area of the exhibit that uses replication and mirror images in a curious way. On each wooden tomb there is the same dated photo of a man’s face, which cover speakers emanating sound. The old lumber forms a kind of trough containing dirt and sprouting blades of grass, brilliant green with ambition to grow in this space so preoccupied with death. Amidst this decay is rebirth. The set is again a symmetrical mirror of itself, with four tinted blue photos in the center. Is this where the two opposing realms butt up against one another—living and not? One reflects the other; everything is the same, just flipped. The repetition seems to remind that death is not unique, but rather something impending and universal. The residue of life—the monuments we construct, the ricocheted stories and deserted objects—becomes less individual and more part of an ongoing and shared fetish.

There is a certain tension that arises from the ambiguity of environment the installation imposes. The upside down tree suspended from the ceiling perpetuates this effect. It’s heavy and delicate, symbolic in an elusive way. Lit dramatically from above, the outer branches are connected by cords to tables with bird’s nests and speakers built in. They send vague static, seeming to function like neurotransmitters firing synapses, to the outer three boxes. The diffuse light, surrounded by darkness and background auditory elements, in conjunction with the weirdness of the set-up, presents an ethereal atmosphere, like a corridor between sentient living things and silent living things. Adjacent to the tree is a video projection of a faceless crowd moving in unison, droning and shuffling in a human sea. The placement makes them appear to be entering into this other uncertain realm, a place where it seems all humans will inevitably go.

In the back corner of the exhibit is a perplexing blue-lit room. Encased entirely by walls containing small speakers and little square windows, the room has very limited access; the viewer has a constrained vantage, and no real tools of reference to understand the contents of the space. It is a strange arrangement of old wood and bricks that feels more haphazardly placed than anything else in the installation. It appears mysterious and rather incomprehensible to the spectator, especially given their inability to approach or examine it. They can only look through the glass. This area communicates the theme: the living have a very limited understanding of death and its aftermath. Ephemeral, cryptic hints lay about, leaving us to guess at what no one really know. This is consistent throughout the show—the artists willingly express that they too have no definitive understanding of the phenomena they present with their work. Their honesty is refreshing, and cements their thesis by leaving the proposed questions up in the air—aerial.

The Pickle Company will hold a closing reception for Aerial Friday February 9th, at 8 pm with performances by Ether Orchestra and Sons of the Atom. Click for more.