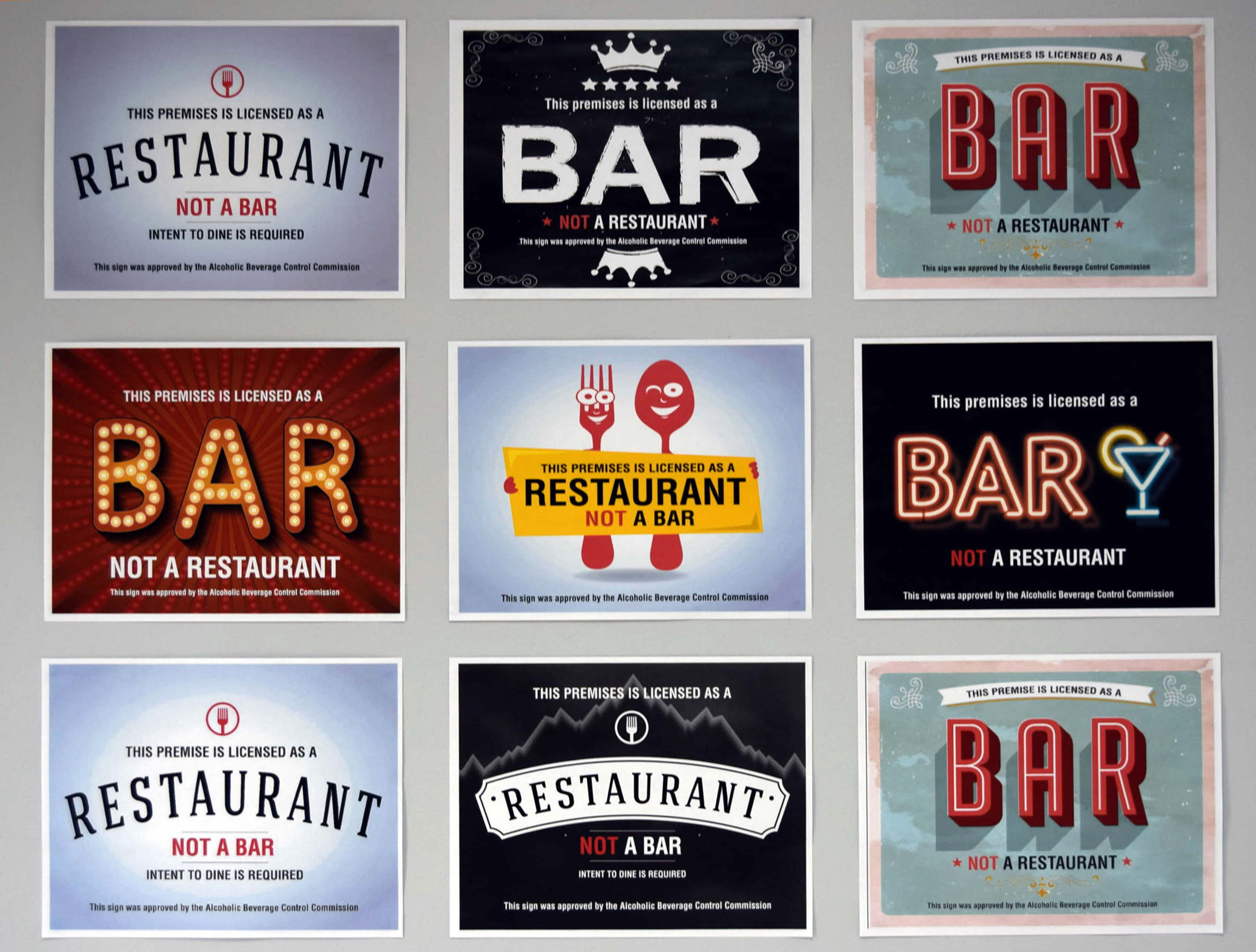 This is ART, Not a Sign
is a fitting title for Tanner Lenart’s exhibition at Nox Contemporary, which opened Nov. 16. The barrage of commercial signs, posted grid-like on the wall, and reading alternately “This is a Restaurant, not a Bar” or “This is a Bar, not a Restaurant,” would not immediately be considered art; but, transformed by the context of the gallery setting, they become a powerful reminder of the people’s power to make local change.

In 2007, Lenart came to Utah to study law, and since graduating seven years ago has been working in alcohol law, helping clients navigate the sometimes Byzantine liquor laws in her adopted home. When she first arrived in Utah, patrons still had to apply for membership to private clubs to consume alcohol; then there was the Zion curtain, creating a visual barrier between patrons and bartenders; and most recently there was Utah Code §32B-6-205(2)(b). The signs Lenart has appropriated for her exhibition were part of this state law, passed in 2017, which required establishments that serve alcohol to indicate whether they were licensed as a restaurant or as a bar. The reason behind the law remains unclear, as it seems obvious that someone could tell whether they were in fact at a bar or at a restaurant. Nonetheless, businesses had these signs up until finally enough public and media ridicule drove a change that allowed bars and restaurants to remove their signs less than a year later.

The signs not only describe the nature of the business with text, but also give visual clues. The bar signs look just a tad more rambunctious than the restaurant signs, with typeface imitating neon (complete with a neon martini) or bright bulbs typical of a burlesque sign. The restaurant signs are in much more conservative fonts, one almost kid-friendly, featuring clip art of anthropomorphic silverware giving patrons a wink. Though the exhibition materials do not indicate whether the businesses made the signs or if, rather, they were created by the commission enacting the code; the latter is more likely given the exact reproductions of all these signs gathered by Tanner. The imagery alone gives you some idea of the viewpoint of the commissions and the Legislature in Utah surrounding alcohol accessibility and for whom it is meant.

Alcohol laws in Utah are frequently incomprehensible, and you may have noticed these signs on restaurants and bars over the past year without understanding their meaning. Now that the law has changed that may not matter, but Lenart’s exhibit may be a sign of what enough pressure from the people can do in effecting legislation. Conceptually clear and locally relevant, Lenart is able to make us think about why things are they way they are, and, seeing that change is possible, decide whether we will try to change things further.

“This is ART, Not a Sign,” an exhibition by Tanner Lenart, Nox Contemporary, Salt Lake City, by appointment only through Friday, Nov. 30, by contacting john@johnsproul.com

Dana Keith Hansen is a teaching assistant and M.F.A. candidate at the University of Utah.