The Work of Art in an Age of Civil Repression 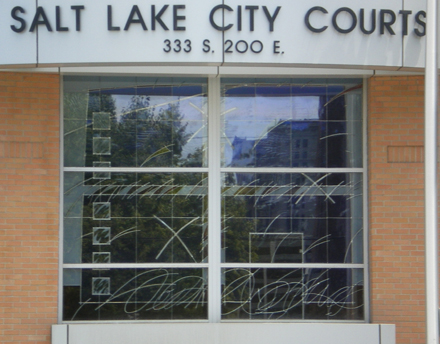 I do not endorse casual use of the term “Fascist” in civil discourse. In spite of Abu Graib, in spite of Gitmo, in spite of racial and economic profiling, and in spite of efforts by the Bush Administration, the McCain campaign, and right-wing blogs to convince Americans that habeus corpus is a threat to us, rather than what protects all of us from abuse of its power by our government, most of us still enjoy a level of personal liberty that cannot seriously be compared to what three-quarters of the world’s population suffer at the hands of their governments. And while I hate it as much as anyone when misdirected efforts at security cause me to miss my plane, I am happy to cooperate with legitimate efforts to keep me, and my loved ones, safe. That’s what I told the uniformed officer who refused to let me look at one of Salt Lake’s substantial works of public art.

At the end of the Second World War, many combatant countries found themselves amid the rubble of what had been both their infrastructure and their cultural heritage. Ironically, replacing what was destroyed revitalized their economies and their arts. In Germany, the Baltic States, England, and elsewhere, literal acres of artistically novel stained glass rose to meet the new day. Architectural engineering, glass-making technology, and post–apocalyptic vision combined to produce some of the most wonderfully articulate ornamented spaces since the Middle Ages. In these windows, characterized by sensitivity to architectural setting and a strong feeling for graphic design, glass and lead serve closely coordinated roles in mechanical support and aesthetic expression. They work magic with figure-ground relationships while weaving a sensual link between pure marks and intelligible signs. Eventually, a few such windows were created in the United States, where a materialist culture in love with happy endings and with no experience of devastation found little resonance or appeal in them. Having gone to great lengths to see the originals, I was genuinely surprised when, while walking through downtown Salt Lake, I spotted a bold example of European-style stained glass prominently mounted in the façade of a public building. Although meant to be seen from outside as well as from within, I knew I had to see it in all three proper views: from outside in the day, when lit from within at night, and primary among them, from inside in daylight.

I’d like to say more about that impressive window, but I can’t. In spite of my bona fides as a citizen and my professional interest in this theoretically public space, I could not get ten feet into the building to turn around and examine its front window. A sign outside the door warned that anyone entering was subject to being searched. I have no quarrel with that: it’s been years since I carried any contraband on my person. A second sign, recent and hastily made, said that based on “recent events” security had been tightened. I wonder about the social amnesia that makes this sign possible. Far from recent, it was in 1970, just shy of 40 years ago, that Jonathan Jackson entered the Marin County Courthouse (Frank Lloyd Wright’s last major commission) armed with guns and explosives and precipitated a shootout that left the judge and three trial principals dead. Surely no “recent” event involving a pedestrian entering a courthouse has added any urgency to the overhaul of courthouse management initiated by that fiasco. 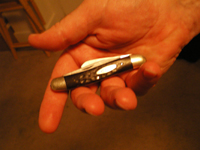 I don’t wish to make too much of my particular experience. It happens that I have carried a pocketknife—a ubiquitous, traditional, personal tool—ever since my father and my uncle gave me my first one half a century ago. While I have no quarrel with surrendering it while I fly on an airplane or enter a secure facility, I expect reasonable accommodation to be made. After all, we in Utah live in a state where an ordinary citizen legally carrying a concealed handgun cannot be made to disarm even when entering the State Capitol. When I flew on Brazil’s national airline, the plane’s bursar held my knife and returned it on arrival. In a courthouse in Oregon my knife was held at the door until I returned to claim it. On a cross-country flight I was allowed to check my knife as luggage. Yet here in the city where I live I was told that I must agree to its permanent confiscation, in violation of the Constitution’s strictures on unwarranted seizure of property, in order to stand by the door to look at a work of art.

I suppose I should point out that I am not trying to get myself a lecture on “how dangerous it is out there.” My point is that dangerous times need not be uncivil times. Indeed, there is no reason to believe that rude or capricious behavior on the part of government agents, footwear notwithstanding, adds to anyone’s safety, and good reason to think it actually puts us all in greater jeopardy. We, the people, have a right to reasonable access to the places and workings of government, which after all we pay for and which represents us. The artwork I sought to see belongs to the public. The wages of the half-dozen or so uniformed officers who were milling about in the lobby, apparently with not much to do at a combined cost of around $3 a minute, were likewise public employees. While I am grateful in retrospect that they chose not to harass me, as they could have in complete confidence that their superiors would have backed them up, it hardly seems unreasonable or unfair of me to ask why they couldn’t have indulged me by briefly holding my property while I walked twenty paces or so around the lobby and examined a part of the public’s art collection.

Instead, I was treated to the kind of brusque incivility we’ve become all too used to from those who seem to see themselves not as trustees of our welfare, but as our supervisors: as the ones doing something important which the rest of us would make easier if we’d just stay home and lock our doors. It’s possible that in the atomized and self-referential culture of courthouse personnel art and art lovers are an irrelevant nuisance. It’s possible that none of the men and women who confronted me is aware of the window’s presence in their workplace. A truth of our times pointed out by Jonathan Franzen in his 1996 essay Why Bother?is that in large part culture in American is no longer democratic. It’s increasingly imposed on us by larger, usually corporate forces, just like the food we eat and the way we buy a house or get around town. Art has traditionally served as a way to promote the public discourse Jefferson thought vital to democracy. We may ask if we want it reduced to a nuisance that can be ignored or even discouraged in yet another example of the ongoing degradation of our lives that is supposed to save us. If not, it’s going to be up to us to preserve our democratic culture the same we do our democratic politics: by taking part.