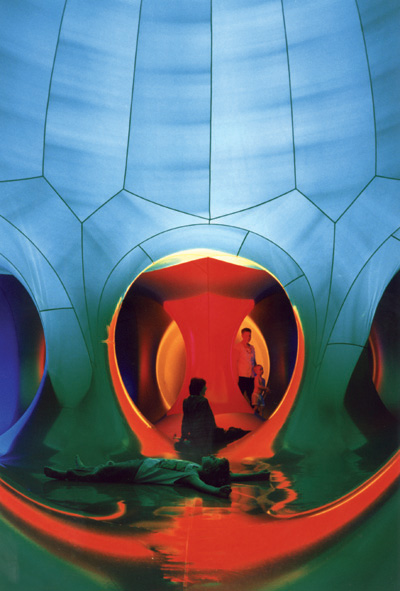 The Utah Arts Festival (UAF), Utah’s largest and foremost arts celebration, will be celebrating its second year on Salt Lake City’s Library Square. With the completion of construction on the east end of the library, the Festival will now be even larger, spreading from Washington Square all the way to 300 East. The Festival is bringing back favorites from years past and some new performances and events that are sure to be favorites of the future. The 28th annual UAF will take place Thursday, June 24, through Sunday, June 27.

“We have some very exciting things planned for this year’s Festival,” says UAF Executive Director Robyn Nelson. “Our international street theater is back once again, we have fabulous musicians and many other exhibits and artists that will make this a Festival to be remembered.”

At this year’s festival, prepare to enter a world of color and light in the Luminarium. A new exhibit at the Festival, the Luminarium is a 16,000-square-foot inflatable structure that from the outside looks like a fanciful vinyl village. Inside it becomes a place of peace and tranquility as organic shapes catch the natural light and put on a dazzling display of color.

“Words cannot describe the Luminarium, it is something that must be experienced,” says Nelson. “It brings a visual art experience to the Festival like we have never had before.”

As always, the visual arts are an integral part of the festival. Known year after year as a Festival favorite, the Artists Marketplace this year will feature artists from a variety of genres. The artists’ booths will start on the east side of the City County block and stretch all the way to the east side of Library Square. Festival patrons will be able to meander in and out of the 136 artists’ booths in search of one-of-a-kind treasures created by local, national and international artists. This year’s Artists Marketplace will include: mixed media, ceramics and sculptures, drawings and paintings, glass, fiber and leather, metal and wood, photography, toys and wearable art.

A more formal visual art experience can be had inside Salt Lake City Library’s main branch. The Festival, in partnership with The Gallery at Library Square is proud to present “Capitol Reef – The Inner Landscape,” a collection of recent work by renowned Utah artist V. Douglas Snow. The exhibition is free and open to the public, not just patrons of the Festival (see adjacent review).

The Utah Arts Festival is about more than just the visual arts. This year’s musical headliners will keep Festival patrons moving and grooving with a variety of acts, from experimental polka and slideshow accompanied pop to Salsa and Celtic rock. This year’s Festival headliners include: Young & Rollins, Kaki King, James McMurty, Brave Combo and Betty LaVette.

The UAF’s signature local and international street performers will be out and about the Festival grounds. Favorites from years past will be returning along with fresh new acts that will delight and amaze Festival patrons. There will be everything from life size slinkies and a New Orleans style musical procession to a daredevil unicyclist and a flame dancer.

In its second year, the Festival’s Short Film Program, “Fear No Film,” is back with more than fifty-six short films produced by local, national and international directors. The films will be shown in 90-minute programs several times a day throughout the Festival in the Library Auditorium.

This year’s Festival includes three competitive programs: the Composer Competition, the Jazz Composer Commission and the Mayor’s Artists Awards. The purpose of all three programs is to identify artistic talent and provide vehicles to have it recognized during the Festival.

For more information on the festival, including times, prices and events, visit www.uaf.org