The UMFA’s Race to Promontory Explores a Time of Transformation 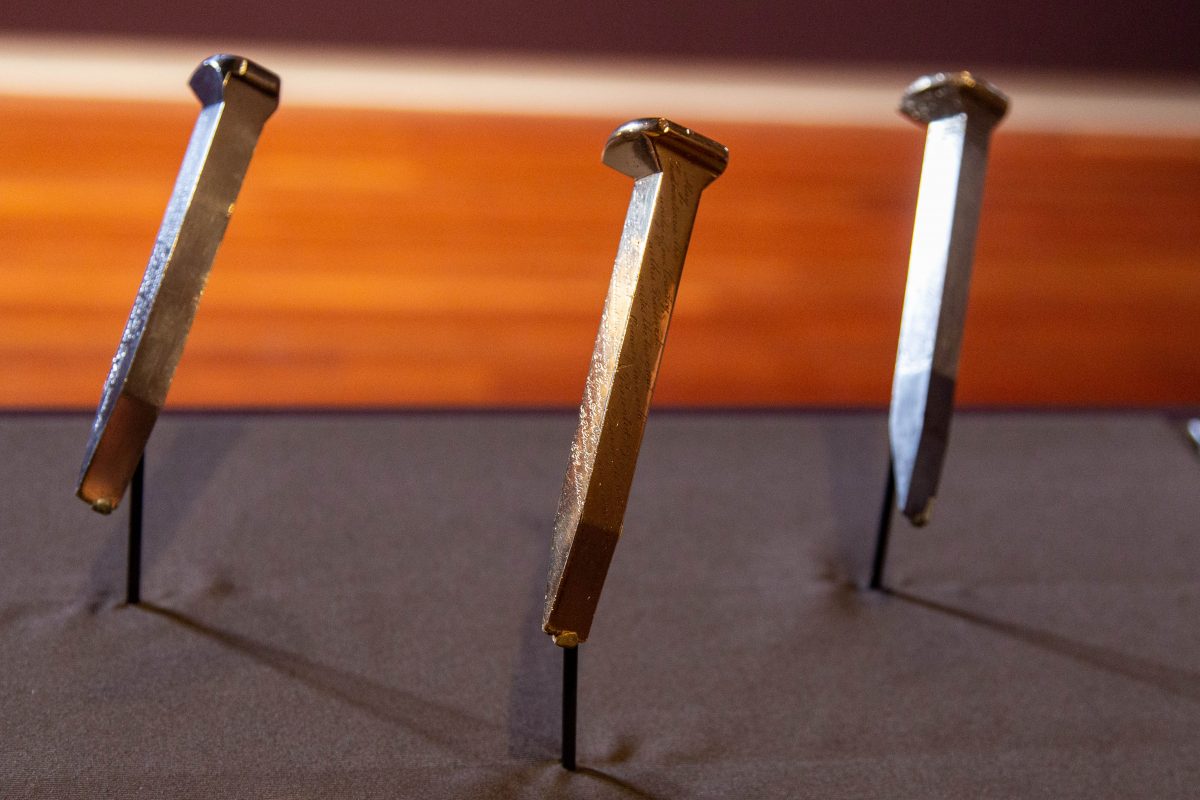 The Race to Promontory exhibition reunites—for the first time in Utah—the famous Golden (The Last Spike), Nevada Silver, and Arizona spikes present when the railroad was completed on May 10, 1869. (All three spikes will be on view at the UMFA through April and then at the Utah State Capitol May 8–12.)

By the end of the 1860s locomotives could travel at a rate of roughly 30 to 40 miles an hour. In an age of jet travel and fiber optics this may not sound like much — you may be traveling twice this pace while reading these words — but in the 19th century, this was life-altering speed. Together with photography and telegraphy, steam locomotion was believed to be an annihilator of time and space. Never before in history had humans been able to travel at such a rate, communicate instantaneously over such great distances, and see the entirety and variety of the world in a print. Together these cutting-edge technologies transformed the way humans engaged and perceived the world — a world that now seemed a little bit smaller.

In many ways, The Race to Promontory: The Transcontinental Railroad and the American West, currently on display at the Utah Museum of Fine Arts (UMFA), is all about speed. This may be lost in our nostalgia for the past and for the railroad in particular, but this concept is central to the exhibition: the shining steam locomotive became the symbol of new speeds and freedoms; journeys that once took months could now be made in days. This exhibition is also about the speed at which photography was being used in innovative ways; the speed at which the western landscape was being transformed; the speed at which people were being displaced and others forgotten. 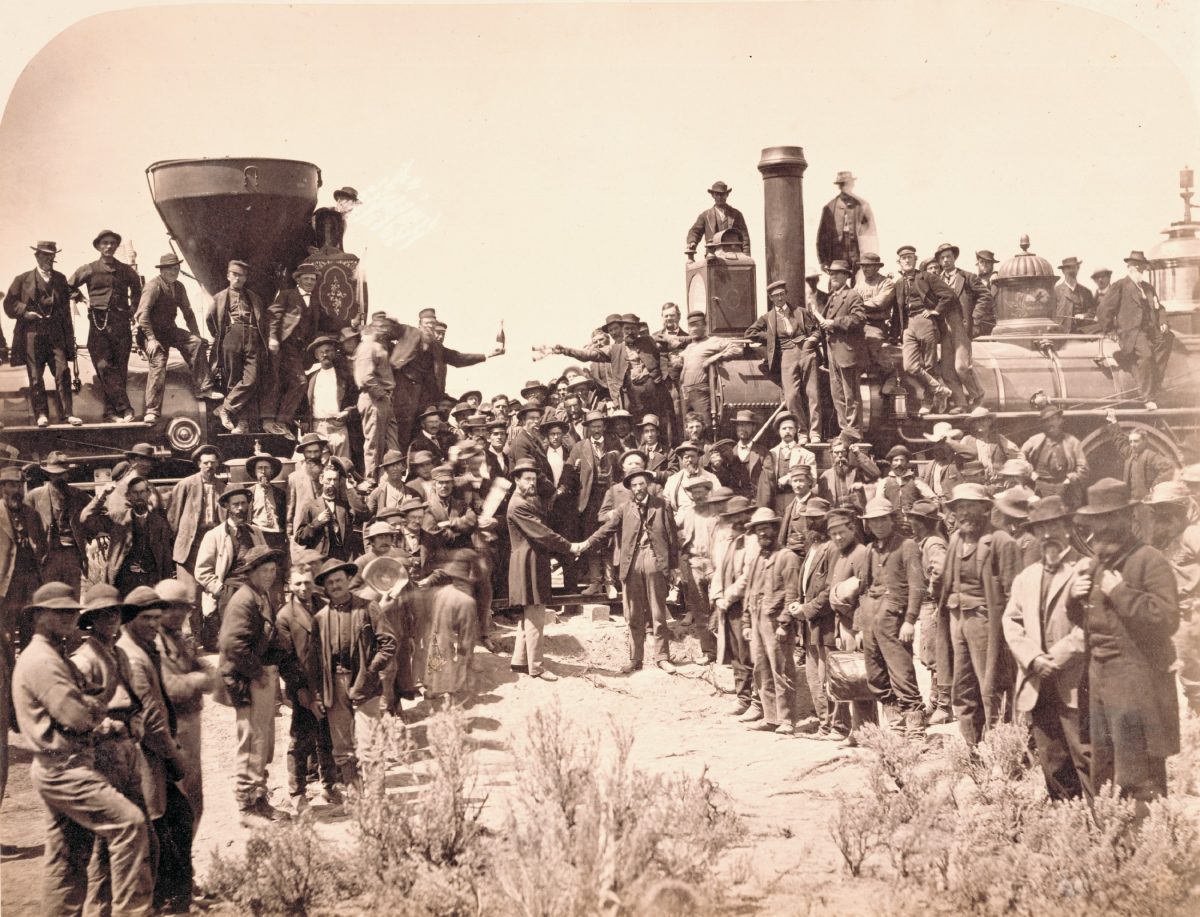 Race to Promontory commemorates the 150th anniversary of the meeting of the rails at Promontory Point, a key event in the history of the West. The exhibition was organized by the Union Pacific Railroad Museum and the Joslyn Art Museum, Omaha, Nebraska, and borrows heavily from the extensive collections of the Union Pacific Railroad. The exhibition is also enhanced by material from the University of Utah’s J. Willard Marriott Special Collections. A number of important artifacts were brought together from these collections, including tools and maps used by the original railroad survey teams and the famed golden and silver ceremonial spikes, which were reunited for the first time for this exhibit.

The core of the exhibition, however, is the photography. Race features the work of three individuals: Alfred Hart, who documented the construction of the Central Pacific Railroad coming east from California, A.J. Russell, who worked for Union Pacific and recorded the construction of the line from Omaha to Promontory, and C.R. Savage, the pioneering photographer who maintained an important studio in Salt Lake City. Each of these men was in the business of landscape photography and present on May 10, 1869, for the driving of the final spike. Russell’s famous photograph of the event is fittingly presented next to the gold and silver spikes on display. This photograph is more than an early example of photojournalism; it has become a metaphor for this heady era in American history. “[A]n epoch in the march of civilization was recorded,” Russell wrote, “and a new era in human progress was ushered in.” 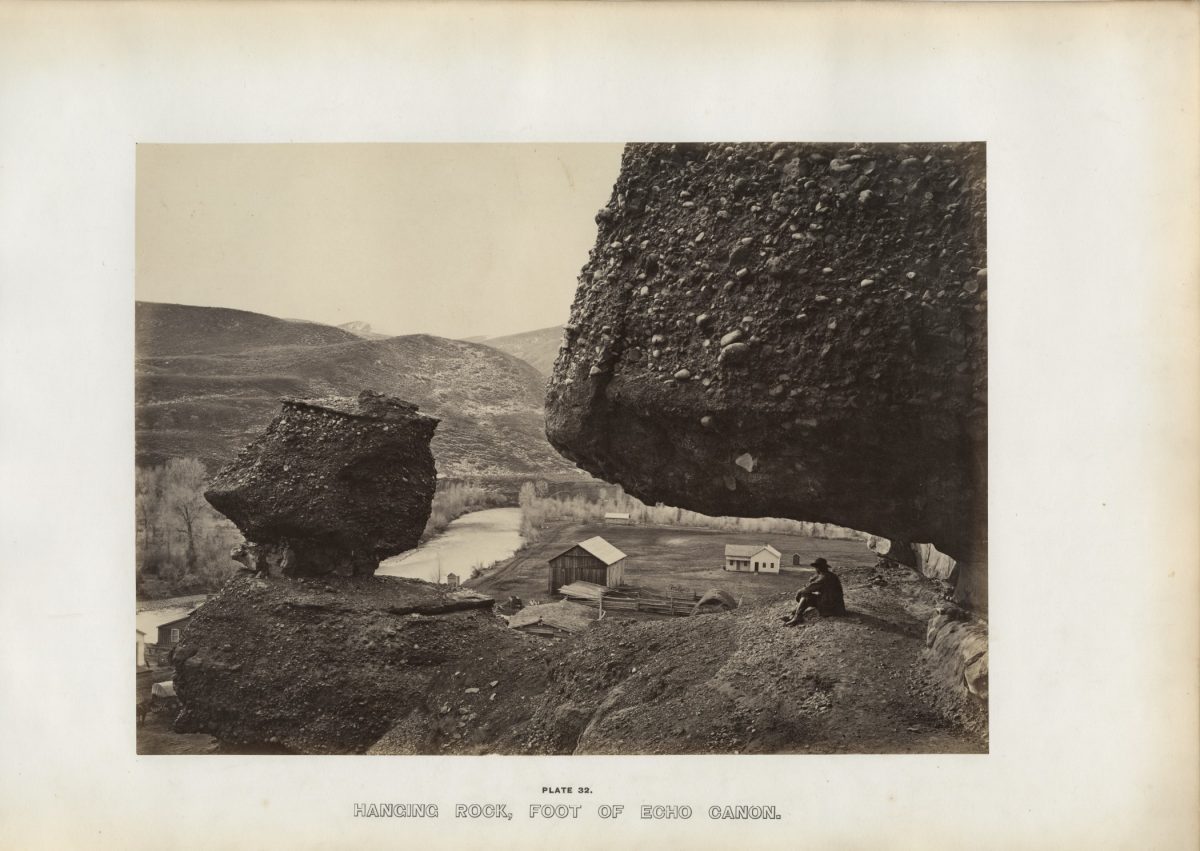 There is more on display than Russell’s iconic photograph. Richly presented on purple walls, the vintage albumen prints detail the places and people involved in the construction of the railroad across the American West. Most of Russell’s “imperial” prints were part of The Great West:Illustrated, a professionally produced album, while others, like the hauntingly beautiful “Entering Black Hills, Granite Canyon,” are unique prints. Up close these large photographs allow visitors to see remarkable details like small figures used to show the immensity of the West’s open spaces and rock formations. From a distance, however, Russell’s sense of composition also becomes apparent. His “Hanging Rock” clearly illustrates his abilities and daring as the solid masses of the titular rocky overhang, as well as its companion, Pulpit Rock, dominate the photograph. Upon closer inspection, a small figure is seen resting uneasily under the looming cliff while below the calm Weber River meanders among small farms and homes.

One of the most striking and important aspects of this exhibition is the presentation of stereographs. Wildly popular for much of the latter half of the 19th and early 20th centuries, these small, twinned photographs created the sensation of three-dimensional space when seen through a viewer. They provided a virtual experience for viewers who would most likely never be able to visit the site. While not able to handle the photographs in the exhibition, inexpensive handheld viewers are available for visitors. While the 3D effect in some is negligible, in others it is dramatic. Hart, in particular, understood the potential of this medium. As seen in “Rounding Cape Horn,” he created striking stereographs that brought the drama of the West and the modernity of train travel to life.

Whether through large-format images or stereographs, the photographers documented places of interest to earlier generations such as Devil’s Slide, which are now largely forgotten (When was the last time you made a trip to Devil’s Gate in Weber Canyon?). They also captured a West in transformation. Although the railroad followed well-established routes, when it came west it violently altered the landscape. Large cuts, fills, and trestle bridges, all well-documented by the photographers, allowed the railroad to maintain its level course and keep its record speed. These altercations with the land have helped create the West we know today.  For example, Pulpit Rock, the popular rock formation in Russell’s photograph that once stood at the junction of Echo Canyon and Weber River Valley, was blasted out to make space for additional rail lines.

The transformation of the landscape documented by the photographers was only part of the change the railroad brought. As the railroad arrived, certain populations were pressured by the incursion of new settlers, new towns, and new access to markets. A close examination of the photographs reveals the presence of Native Americans, particularly the Paiute and Shoshone, who were here long before 1869. Almost completely absent from the photographs, however, are the Chinese workers who labored to build the Central Pacific line. At the end of the line, Hart didi photograph one quiet Chinese camp from a distance but it lacks many of the details that would help us know how they really lived.  Wisely their voice has been reinserted into the narrative through public programing and other events.

Another of the key additions to this exhibition is the inclusion of C.R. Savage and his work. Savage, who endured two fires that destroyed his studio and most of his glass-plate negatives, has never received the credit that he deserves. This is clearly the case with the versions of this exhibition at other locations, which only feature Hart and Russell. UMFA curator Leslie Anderson’s prudent decision to include the Utah-based photographer not only adds an important local connection, but also highlights his abilities and the fact that he is an important part of this discourse. From his base in the West, Savage repeatedly captured the region’s most significant and sublime features in changing light. He knew the survey photographers including William Henry Jackson and Timothy O’Sullivan and worked alongside Russell in the field. He aided John Wesley Powell, worked to publicize the railroad, was well known for his photographs of Native Americans, and was Brigham Young’s best and most-trusted portraitist. Savage is not only a part of 19th-century Western photography, he was central to its history.

On an average day most visitors and school groups seem to speed through Race. They may locate themselves on the large map and look at a couple photographs before wandering off to the next exhibition. Race to Promontory may be about speed but to gain a full understanding of its importance one must slow down. Read the panels, get up close to the large format photographs, see the historic spikes, and, most importantly, pick up a plastic stereoviewer and look at as many stereographs as you can. Take the time. There is nothing that will transport you back to the past faster. 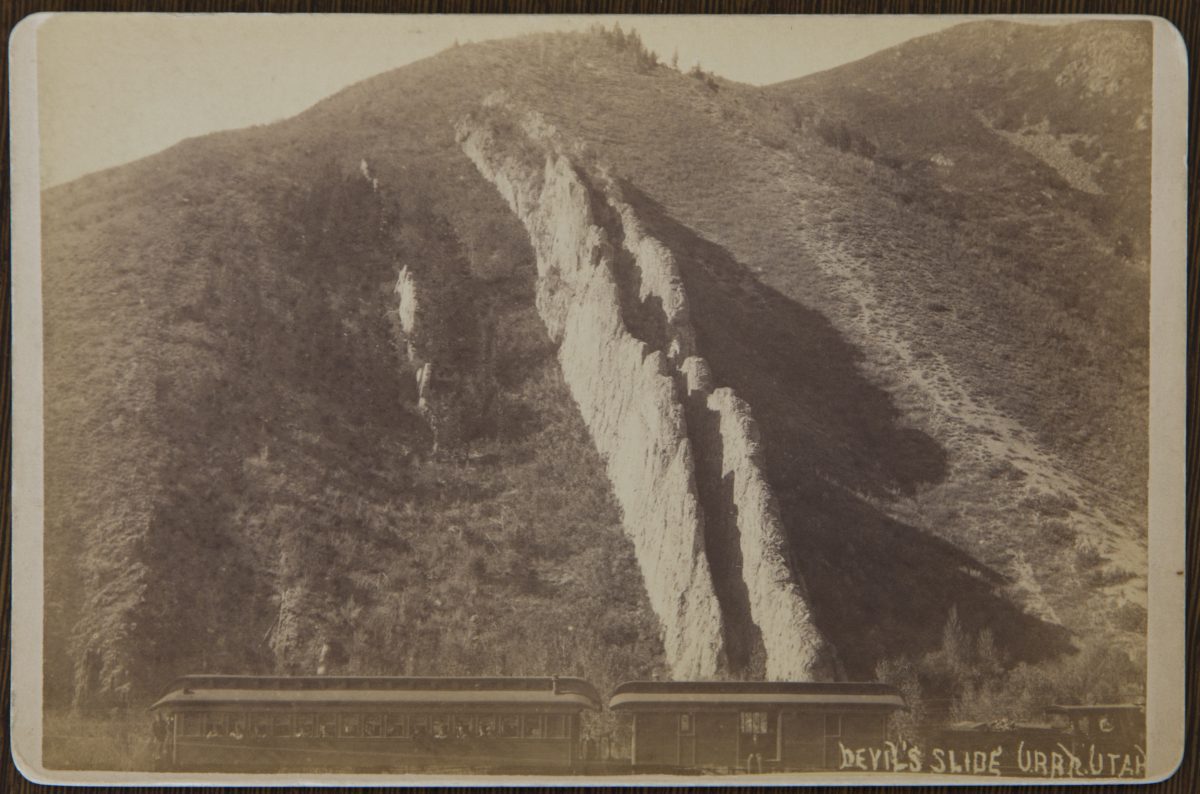 The Race to Promontory: The Transcontinental Railroad and the American West, Utah Museum of Fine Arts, Salt Lake City, through May 26, in conjunction with other exhibitions across the state celebrating the 150th Anniversary of the Golden Spike. For more information visit www.spike150.org. 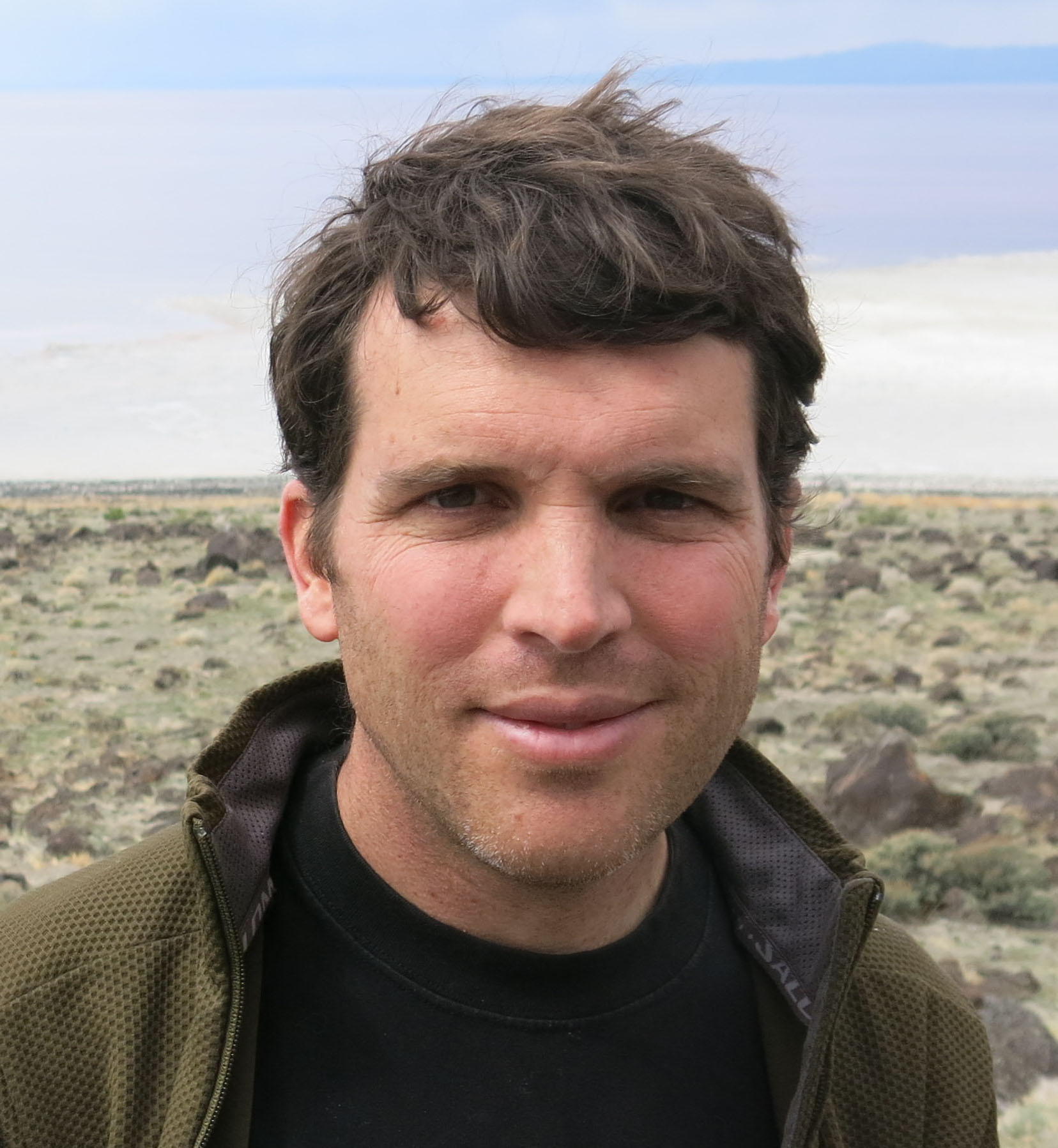 James Swensen is an associate professor of art history and the history of photography at Brigham Young University. His research interests include the art and photography of the American West. He is the recipient of the 2016-2019 Butler Young Scholar from the Charles Redd Center for Western American Studies.