The Squares and the Beats: The Lane Gift at NEHMA 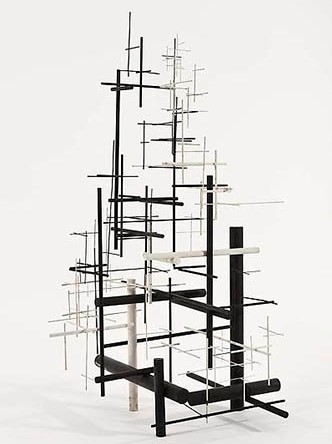 The exhibition The Squares and the Beats: The Lane Gift playfully explores American values from the 1950s and 1960s through works of art by Jeremy Anderson, Sidney Gordon, Knud Merrild, John Bernhardt, George Herms, and Gordon Wagner.

The Squares | Works of art in the exhibition by Jeremy Anderson, Sidney Gordon, and Knud Merrild were inspired by European modernism, especially the early 20th century movements Constructivism and Surrealism. These artists used traditional academic sculptural and painting materials and methods aligned with the mainstream practices of early to mid-20th century American modernists. The 1950s generation epitomized the belief in progress or modernism, and reinforced values such as religious faith, patriotism, and conformity to societal norms.

The Beats | The 1960s generation ushered in the counterculture, which questioned the values of the prevailing mainstream and sought to usurp authority. John Bernhardt, George Herms, and Gordon Wagner were influeced by Zen philosophy, African American music, poetry, and European collage. The materials they employed in their works of art were the detritus of American life; the term Assemblage refers to the fact that these artists assembled their work using unconventional materials like debris and other found materials.

NEHMA is grateful to Jeffrey and Meri Lane for the extraordinary gift of all of the artworks included in this exhibition.

The exhibition has been curated by NEHMA curator of collections and exhibitions, Bolton Colburn.