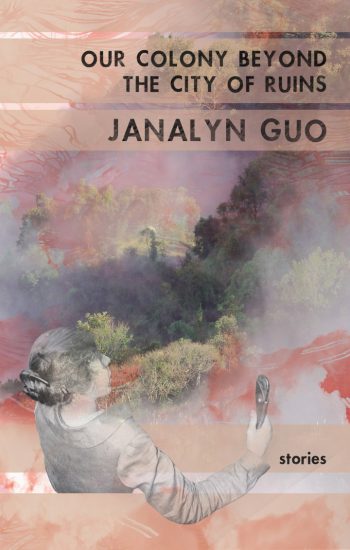 There’s an impending sense of madness in Janalyn Guo’s collection of short stories Our Colony Beyond the City of Ruins. The quick movement between each story, and between imagery and action within each, feels at times like the manic switching of cable box channels or the incessant swiping of images on social media sites. A dizzying barrage of creative choice and possibility.

To a young reader raised in a world saturated in digital media, there may be no uneasy alarm set off when engaged with work like Guo’s, which one reviewer calls “new age fabulism.” But readers who came of age with narrative structures that carefully set up, challenge and resolve traditional plot structures may find themselves lost in, then left with, a handful of colorful jagged pieces of creative ideas that pulse with the vague feeling that they go together, but one can’t quite imagine how.

If we run with the notion that these stories are modern day fables, connected to a kind of coherent culture-building, then, as a collection they make little sense. But if we read them one at a time, as stand-alone, bedtime yarns, satisfying the demands of children for spontaneous storytelling, these tales glow with an imperfect but playful light. Reading them back to back as a collection, however, dims those momentary glimmers of mystery and surprise and one is left with a kind of tired anxiety. This experience provokes a discussion of how such genres should be read. But such an arduous intellectual conversation would steal away the simple pleasure of the indecipherable magic that many of these stories possess.

There is a strange beauty in much of Guo’s work despite the manic changing of channels. “His hairline has receded the way waves pull at the sand and leave it smooth. The smell of something distinctively oceanic strengthens around him as he foams and snores, foams and snores.” This is Guo’s description of the ghost of a living seaman that haunts a confused daughter, as it looks for answers to its own existence. This sea ghost is an entity called from the spirit world to replace her father as he’s about to die in a violent storm. The father doesn’t die, but his ghost is not allowed to return to the spirit world. So the daughter hosts her living father’s ghost on a tour of the fishing village where they live. It is a lively and poignant setting to explore the distances, the longings, and the unresolved emotions between a daughter and her seagoing father. This ghost smells. The daughter discovers it’s made from sea-slimes and kelp and mollusks and plankton. The winds and foams of ocean currents change course and circulate as living fluids within the sea ghost of her father as it adjusts to its own type of purgatory, neither here nor there, in nor out. The corporeal manifestation of this ghost embodies the biological and social alienation each human generation experiences from the one that preceded it.

But just as the reader settles into the conventions of this story, titled “The Sea Captain’s Ghost,” confident in its interpretation of the author’s tropes, Guo wrests away that intelligibility and introduces new elements, as if from thin air. The daughter reads about sea ghost excretions. How water ghosts and their “life-enhancing goop” feed on electrical charges called “motes” that are invisible to the human eye. “Places of comfort produce fields of motes; thus, their haunting patterns are established.” And thus, the reader is left with homework, the requirement to re-read the story for lost clues. There’s a compulsion to Google the term “mote,” and its relationship to “goop.” (There is no such information on Google.) So the reader is left with the jarring notion that one may never fully understand the connection between the goop of a living father’s ghost and the need for emotional connection between a daughter and her long-absent parent.

And therein lies the danger of this genre, if we dare categorize Guo’s work at all. Magical realism, fabulism, absurdism: all those definitions may work temporarily for such literature and yet, ultimately, they don’t work. The author won’t allow for such academic congruency.

But messing with genre has consequences.

Guo’s work is often pleasing and cute. Inventive and shocking. Flippant. At times, a bit lazy. The snap introduction of confounding imagery can feel like the quick emergency bat signal for a literary deus ex machina to rescue her from a narrative dead end. It’s hard to tell if Guo is messing with the literary devices, making fun of them, manipulating them or trying deftly to perfect them. And maybe what she does, is tell the reader to just not worry about genre. Particularly the reader who is most influenced by definitions.

This happens most profoundly in “Heart Site.” A small village buries peoples’ hearts once they’ve passed. Hearts grow in this ground to the size of small houses. Inside these hearts are what Guo calls “crones” that live and move in tightly linked balls surrounding a queen who grants wishes to villagers. Many of the wishes are made between children and their fathers hoping for the lessening of distance between two generations. Maybe a single theme does thread its way through each of these stories. Maybe there is a thread running through this collection suspended from strands of wild transfigurations. But so much of her work points to the conclusion that theme is less important than disorientation. “Heart Site” is challenging and wildly inventive. It has creative kin with classic Japanese animé. The frenetic energy of Miyazaki’s Spirited Away permeates Guo’s work with all its wild dissociations that leave readers perplexed and charmed at the same time.

Reading Guo’s work is work. And in our easy comfortable lives, we all may need to work a little harder to rebuild our creative selves and not simply open our fat throats and accept whatever creativity is shoveled at us from digital machines bent on profit generated from numb conventions. It is frustrating not to be led by the nose as one reads. But the letting go of one’s literary expectations, done in short intervals, unburdens the reader from the limits of genre, allowing a state more like that of a waking dream. This loose and fluid way of reading cradles the reader’s hesitancy regarding writing of this kind, to trust Guo as she bounces from one image to the next, allowing one’s self to be worked on by the writing, instead of searching overly much for meaning. What does it matter if she’s making it up as she goes along?

That technique does create its own bogs that occasionally get a little sticky. In “Acting Lessons,” there are frogs being farmed, pale dead bodies and repeated references to an Ibsen play. What we end up with is, well, a pile of quotes from A Doll’s House, terrariums, and spirits with a strange flesh on their bones.  “Night Floats” contains a mouth wired shut, rapidly moving sand dunes, floating yogis, a stolen mustard colored chair and soap-making. These few stories are odd and alienating, with imagery that seems pointless and loosely bound like hallucinations or random social media posts. (Which, again, might be the point.)

There is the unspoken admonition for the reader that does ground Guo’s work — to seek less to fully understand or make sense of fractured human relationships and simply embrace the random nature of existence. Intentionally crafted this way or not, Guo’s work mirrors back to the reader the maddening mosaic of images and stray thoughts, rants, and frustratingly forced associations that all consumers of digital media must endure daily. Her stories are not your father’s magical realism. They’re very different from Gabriel Garcia Marquez or Italo Calvino. These stories are not like the poetry of Ezra Pound or T.S. Eliot. Not the plays of Samuel Beckett or Harold Pinter. These pieces make up something else, something formed but coming apart. And it is in those cracks between the recognizable chunks of literary convention that the best, most odd and compelling and sometimes moving of Guo’s work shines through with brief and baffling moments of unsettling beauty.

Our Colony Beyond the City of Ruins
Janalyn Guo
Subito Press
144 pp
$18.00

Eric Robertson is professor of humanities at Utah Valley University, a founding editor of saltfront; studies in human habit(at) and the author of The Salted Earth, winner of the 2015 Utah Arts and Museums Original Writing Competition.