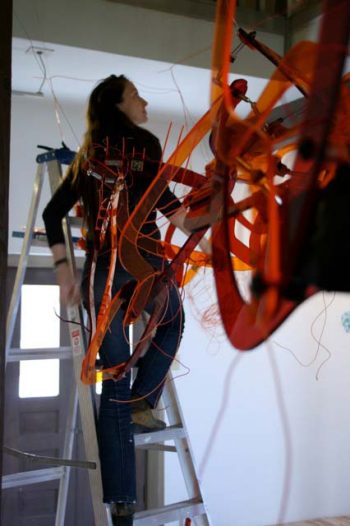 Meredith Pingree installing her work at the CUAC

Growing up in Utah, Meridith Pingree was surrounded by evidence of geometry contributing its structures to nature. Consider hexagons; these most efficiently packable of all shapes give form to living things across the spectrum, from the honeycombs of bees to the triangular shape of Sego Lilies. Nor was Pingree the only Utah native who, on growing up to become an artist, found such familiar themes viable and versatile components of her art. Fans of Annie Kennedy will see a certain connection between her art and Pingree’s; not only do both women draw on themes found in nature, but both use indigenous household materials to give their ideas material reality. For Kennedy, of course, it’s wax, oil, and survival supplies. For Pingree, it’s safety pins, skewers, plastic costume jewelry, and zippers. For Meridith Pingree, these simple ingredients enable her to embark on a journey out of our familiar, Euclidean, three-dimensional space and into a realm that would seem to be perfectly cerebral, perfectly imaginary, if it weren’t for the way she tracks it down and brings it into the gallery to hang on the wall or dangle from the ceiling, often while writhing in response to the viewer’s own presence.

Some artists paint. Others sculpt. Scientists and mathematicians call Pingree’s primary medium hyperbolic geometry. To get an idea how one of her works comes into being, we might try to imagine this process. Consider the honeycomb, or a sink full of foaming soap suds. Both will be made up almost entirely of hexagons, six-sided shapes that come about when circles press together until they take up all the space. Circles won’t fit tightly enough, but hexagons leave no space unfilled. Each hexagon is surrounded by six other identical shapes, and each corner is the meeting place of three sides. A two-dimensional surface like a piece of drawing paper can be neatly covered by such figures repeated until the page is used up. Pingree might begin to explore what lies beyond this pattern by asking what would happen if there were seven matched sides instead of six. As in turns out, it’s not something that can be drawn on a flat surface, because it fact what happens is the surface buckles. Like lichen growing on a rock, the surface pattern exceeds the surface area, and more complex and elaborate shapes come into being. Many of Pingree’s works are, basically, fabrics that she has brought into being by following through with such initially simple mental exercises. 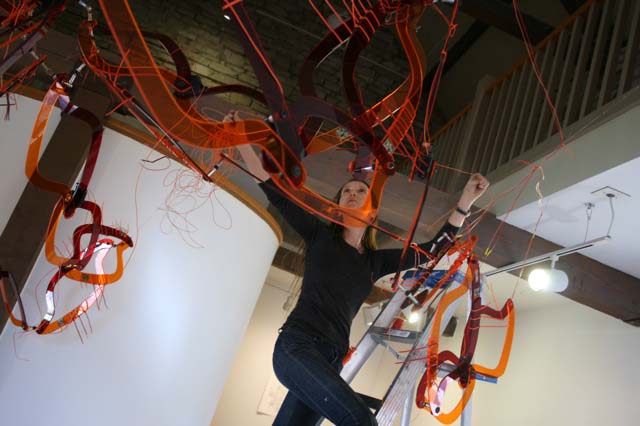 Of course if that were all there was to it, it would be closer to Geometry than to art. This is where those commonplace materials come in. You can construct a geometric figure with a protractor, but it’s more interesting to use a plastic spider ring to make an octagon, or by skipping one leg, a heptagon, or by skipping every other leg, a square. It’s axiomatic in hyperbolic geometry that there are no regular triangles, no parallel lines, no congruent shapes. In other words, everything happens once, but nothing happens exactly the same way twice. Thus Pingree’s theoretical fabrics grow into objects of complex shape and brilliant colors and come to resemble the things they share a common mathematical origin with: living things. To these she may then give the power of motion, equipping them with electric motors and high-tech sensors that make them move about on their own or in response to a viewer’s presence. In this way she brings her studio process, the discovery-by-doing of how certain components with certain modular dimensions create certain objects with variable and uncertain dimensions, into the gallery. She also points the way to a perceptual process that has been taking up a lot of our collective attention lately: how a two-dimensional space makes the transition to a three-dimensional space, and how we can conceive of a four-, or even an eleven-dimensional space by following them. Art has always played a pivotal role in new ways of perceiving and envisioning the world. 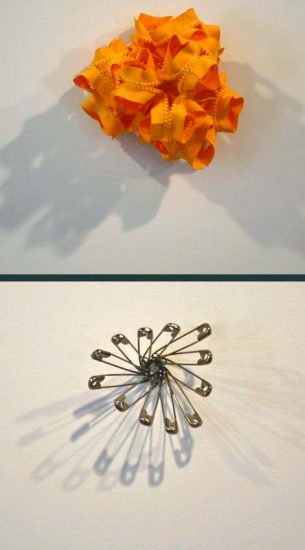 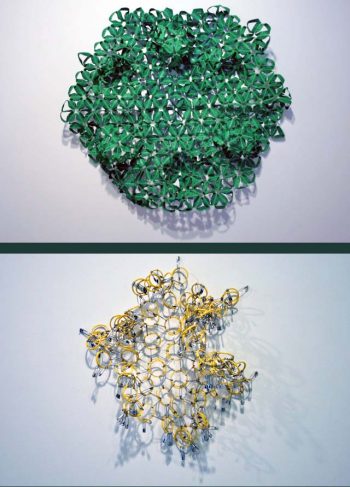 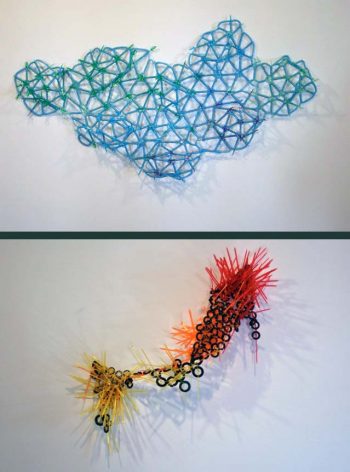 FURTHER NOTE: The Central Utah Art Centercontinues to offer new and exciting perceptual advances, some of them built on a foundation so familiar one must look twice to see how new they are. In an exhibit last month that unfortunately closed before it could be reviewed here, Tennessee artist Farrar Hood showed paintings that uncovered some of the invisible processes that allow us to build a semblance of the world we see in our mind’s eye. Working primarily in large, bravura canvases on which intriguing figures engage in dramatic scenes of compressed, unsettling action, Hood undertakes to paint not the ideas that fill a mind, or even the emotions that ripple beneath them, but the even-more-murky beginnings of consciousness as it emerges from the underlying impressions that clue us in to our own being and let us know we’re alive.|5| Her subjects’ motto might be, “I am uneasy: therefore I am.” 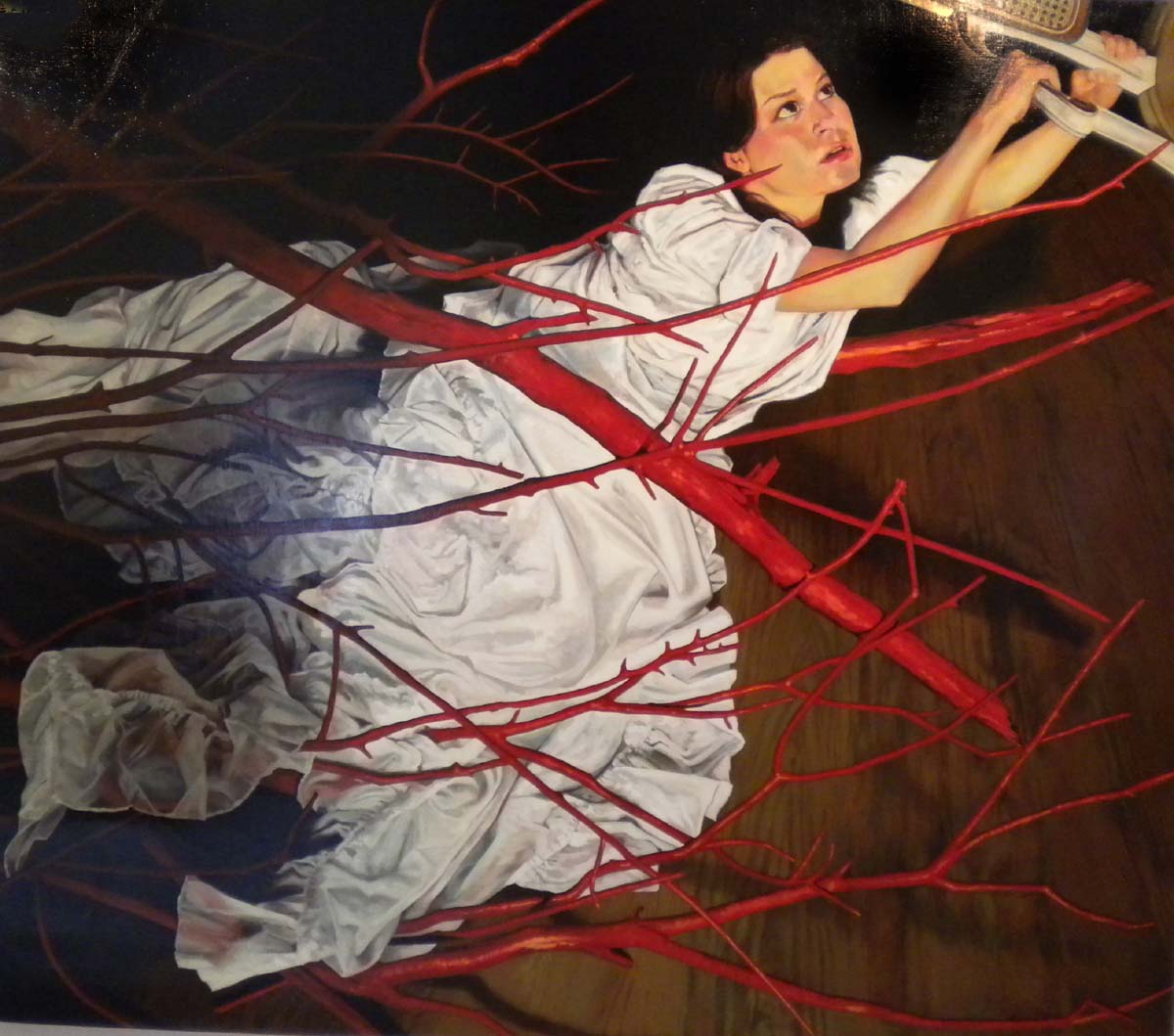 Meridith Pingree’s works are at the CUAC through November 9.