The Rock is Back! Or is it? 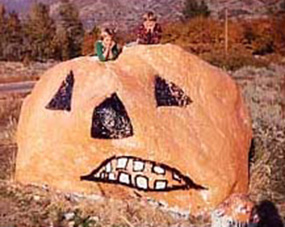 A lonely piece of granite located along 9800 South is causing a lot of controversy in the small Salt Lake County community of Granite, Utah. One of the last remaining strata of granite from the time when the LDS church quarried the area for the construction of the Salt Lake Temple, Painted Rock has become a local landmark. For forty years its has provided a canvas for all sorts of public expression.

Painted Rock’s days as public billboard/public art came to an abrupt end earlier this Spring when, a week before Easter, local developer Ralph Subury had the rock buried a few yards from its home. The burial sparked immediate reaction, both positive and negative, from the community. Though Sudbury says many of the local residents called to thank him, another group was quickly making efforts to have the rock resurrected.

Painted Rock was first given life in 1964 by a few local teenagers and a couple of visitors looking for something to do. Richard Thomas and John Schmidt, of northern Utah, had come to Granite at the request of the LDS church to build a meeting house in the area. While in the area they stayed with Ralph and Eva Bishop and their seven children. One evening Thomas and Schmidt, looking for something to do in the sleepy town, convinced one of the teenage children, Jeff Bishop, and a couple of his friends, Hal Parker and David Maynes, to use some of their parents’ old paint to give the rock a face-lift. The next morning the community awoke to see a dinosaur’s head smiling at them on the side of the road. As local resident Charlotte Sturdy says, “the rock gives the kids something to do.” Kids and adults alike have used the rock for a potpourri of visual expression

Some residents have not been happy with that expression. While Painted Rock has served the community as a place to announce births, graduations, homecomings, marriages, anniversaries, deaths, as well as a forum for commemorations, calls to patriotism, and, of course, artistic expression, it has also had a less positive aspect. Access to the rock is free to anyone with a can of paint so vulgarities, even if quickly covered up, have also appeared. Sudbury, who is building homes across from the rock, says that the vulgarity as well as noise, vandalism, and destruction of property, were some of the reasons he had his excavator bury the rock.

The only problem is that the land the rock is on land owned by UDOT. And though Sudbury says many residents called to thank him for the burial, many other residents want Painted Rock exhumed.

On May 1 it seems their wish would be granted. Local artist Allen Bishop, who is in favor of exhuming the rock, reports that a poll of eligible voters within a one mile radius of the rock were overwhelmingly in favor of exhuming the rock, with 81% in favor, 12% indifferent and 7% against resurrecting the landmark. The poll was presented to the community council, with Mayor Nancy Workman in attendance, on May 1st. The Council made its decision to recommend to UDOT to have the rock exhumed.

Today the rock still lies in its grave. And rumors of its fate have begun to spread. An initiative to have a different rock placed in a different area to fulfill the same function as Painted Rock led to speculation — that reached as far away as the Avenues — that the rock could not be resurrected, because it had been broken in the process. Sudbury says the rock is intact and he is ready to comply with whatever UDOT tells him to do. UDOT, in return, has said they will make their decision based on the Community Council’s recommendation. The Council’s recommendation, however, is on hold. After the May 1 meeting citizens in favor of keeping the rock underground, began taking their own poll. Their survey comprised a much smaller area and only one vote per household were allowed, but the results were apparently in favor of keeping the rock in the ground. Another Community Council has been scheduled for the first Wednesday in June to reconsider the issue of the rock.

So why all the fuss? The rock presents two interesting issues for the community. In a time when the State Legislature has declined to fund public art for two years now (see January edition), Painted Rock provides a powerful example of people’s desire to have forms of public visual artistic expression, especially ones in which the entire community can contribute. And since Painted Rock is located on state land and UDOT has said it will abide by the recommendation of the Community Council, the fate of Painted Rock may say a lot about our democratic process. The June Community Council meeting, which will hear discussion on the merits of both polls taken and which to consider most appropriate in its decision making process, will demonstrate if democracy on a local level works any better than on a national level, as witnessed in the fiasco of Florida’s presidential election. To exhume or not to exhume. That’s the question. But who will provide the answer? Since Painted Rock is located on state property, anyone is welcome to attend the June 5 Community Council meeting in Granite.

Photos from the collection of Granite resident Charlotte Sturdy.