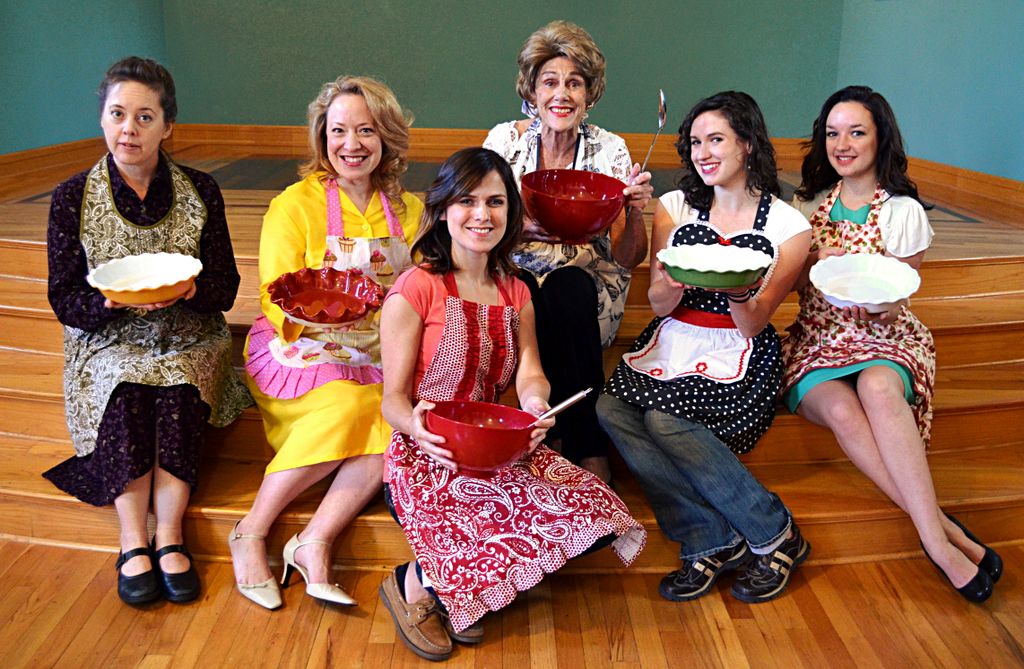 I went to The Righteous and Very Real Housewives of Utah County having seen no more than a few minutes of a “The Real Housewives of…” TV show; but that brief taste was exposure enough to get a sense of the series’ formula of alliances, feuds, gossip, and sexual frankness. Happily, Miguel Santana’s play (based on his novel of the same name) moves beyond reality-show trivia to tackle themes of faith, desire, conformity, and identity.

Wonderfully directed by Alexandra Harbold, the play features Anne Cullimore Decker as Mormon widow Emma Harris; April Fossen, Holly Fowers, Nicki Nixon, Anne Louise Brings, and Haley McCormick as the women in her family; and Jim Dale as Emma’s fiancé. Emma has decided to marry a younger (non-Mormon) man, the Russian Dimitri (Dale), a choice opposed by her daughter Joy (Fossen), who seeks the aid of her sisters-in-law Ramona (Fowers) and Lupita (Brings) to stop the wedding. Emma’s granddaughter Jena (Nixon) supports her grandmother’s desire to remarry, while Joy’s daughter-in-law Wendy (McCormick) remains undecided. In anticipation of the impending wedding, the women engage in examinations of doubt and desire, indulge in opportunities for confrontation and self-scrutiny, and reveal long-held secrets.

The entire cast is excellent. As always, Decker commands the stage, whether instructing someone on the proper amount of carrots to include in Jell-O salad, urging her fiancé to fasten his robe, or singing along with Patsy Cline. I wanted to see more of Decker’s Emma, and to learn more about her feelings for Dimitri and about the struggles with her faith that might have been prompted by those feelings. Fossen’s Joy is the play’s funniest and, in some ways, most interesting character: a Mormon woman who enjoys her special tea each morning (secret ingredient: plenty of cough syrup), she’s a pragmatist who follows her church’s teachings as long as it’s convenient to do so. Her main objection to her mother’s marriage is a financial one.

Fowers, in the role of Ramona, has the task of portraying the least likable of the women. Ramona is envious, intolerant, and in denial about desires of her own that her church would find transgressive. Fowers does a good job revealing the vulnerability and self-loathing beneath Ramona’s judgmental carping. Nixon, Brings, McCormick, and Dale also flesh out their characters well. McCormick’s Wendy is another character I’d have liked to get to know better—early in the play, we hear her on the phone arranging a rendezvous with someone obviously not her husband, yet that relationship is never mentioned again. I haven’t read Santana’s novel, but I suspect the characters there are more fully developed.

The performance space at the Post Theater at Fort Douglas poses challenges for live theatre. Designed as a cinema, there is limited lighting and a small stage. The production makes the best of the setting, opting for simple staging. The mission of the producers, Alligator Press Productions, is to “present theatrical productions with an emphasis on diversity, equal rights, and inclusion.” The Righteous and Very Real Housewives is a bold step on what should prove to be a compelling and thought-provoking theatrical journey.

The Righteous and Very Real Housewives, written by Miguel Santana and directed by Alexandra Harbold, was at the Post Theater at Fort Douglas, May 16-25.