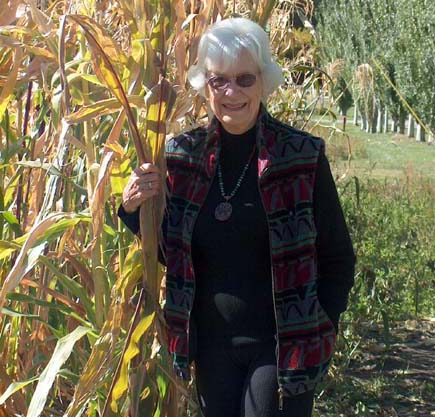 In the early 1920’s when Beverly Wheeler Mastrim was six years old she glanced out the second floor window of her family’s farm house and saw something inspiring. She ran down the stairs and reached a stranger painting a white horse and a barn. Instantly she was hooked on the idea of painting and watched him for the rest of the day. The next morning Beverly talked her mother into letting her dismantle her bedroom window shade for use as a canvas and her music stand to double as an easel. With paints in hand she set out to imitate what she saw the previous day and the rest, as they say, is history.

Beverly, granddaughter to Henry and Sariah Wheeler, was born and raised on the property that is now Wheeler Historic Farm. Her experience growing up on her grandparents’ farm has been her motivation for most of her art work and those first impressions still influence her work today. “Many of my paintings depict the life of a farmer,” Beverly says. “ I have painted their portraits, homesteads and artifacts. I love the earth’s bounty; naturally I favor the earth’s colors for my palette.” 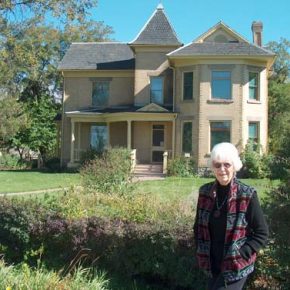 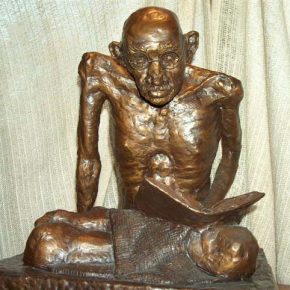 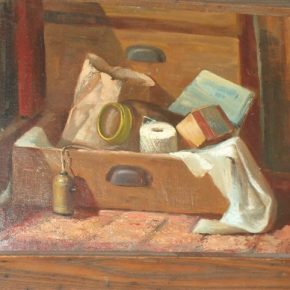 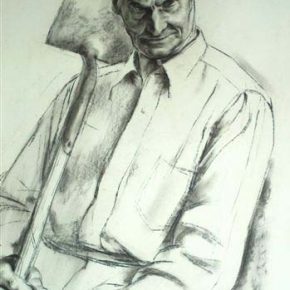 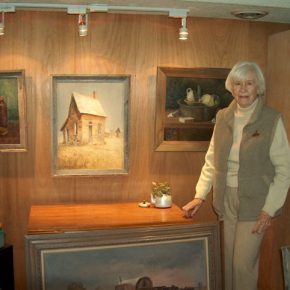 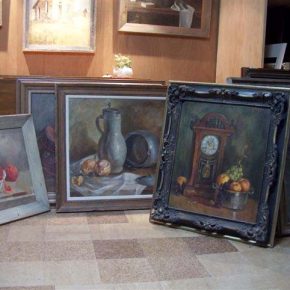 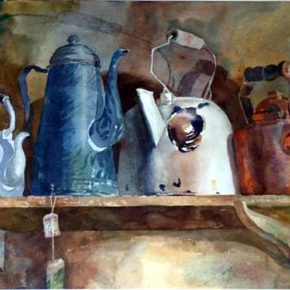 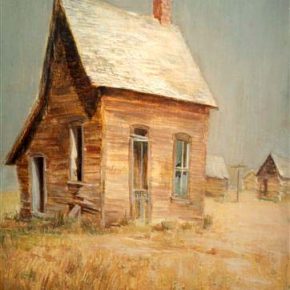 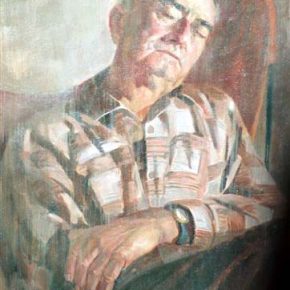 Beverly may have had an early start when she discovered her passion for art on that morning as a six year-old, but realizing her dream proved to be a challenge. When she was a girl in school in the 1940’s and even as a student at the University of Utah from 1952-1956, only a few outlets existed for art. There were no art teachers, classes or career fields established for the craft. Nine months after celebrating her wedding in the family farmhouse in 1943, her Grandpa Wheeler passed away and a nineteen year-old Beverly left Utah for the first time. The Wheeler children and grandchildren had returned to the farm to assist Henry when his wife and Beverly’s grandmother, Sariah, died in 1928. With his passing the need to stay close to home was no longer needed.

Beverly’s husband’s work led them to San Francisco and there she continued to search for her dream. In the year and a half she lived there she worked nine different jobs, forcing her art to take a backseat to a regular paycheck. But work in hat factories, dress shops and doll factories did not intrigue her like painting did. A union job as a butcherette at Safeway Foods was an easy transition for Beverly, courtesy of her training growing up as a farm girl. As a child, her mornings before school were spent milking cows, hauling hay and dressing chickens. This past experience, combined with good wages, kept her content at this position, but it didn’t satisfy her desire to be an artist. The closest she got to the art world while in California was an interview with a local sketch artist. The traditional interview questions were tossed aside and the only request he had for her was to draw a sketch of him. Beverly obliged and then waited. He never returned her call and Beverly eventually left Safeway Foods and California behind her and returned to Salt Lake City.

Back in Utah, Beveryly studied at the University and began developing her careers. She credits the Associated Utah Artists for displaying her work, which resulted in her first sale as an artist. She recalls it being purchased by a woman whose name she has long forgotten, but the piece sticks with her — it was a brass pitcher with grapes and peaches. Beverly has exhibited award-winning landscape paintings locally and in 1952 began work as the art exhibit supervisor for the Salt Lake County Fair. A similar position for the Murray Showcase of Fine Artists was also started in 1958. With many awards to her name, Beverly’s artwork is represented in numerous collections both locally and elsewhere, including the Wheeler Historical Farm House.

When Beverly reveals to me that she was born in the dining room of the 100 year-old historic Wheeler farmhouse on a chilly March morning in front of a “heaterola,” my puzzlement over this term prompts Bev to seek out a piece of paper and pen so she can explain it with a sketch. At this moment it is obvious she is a true artist, someone who uses lines and shapes to articulate and communicate. In the span of one minute both a history lesson and an original Mastrim piece are dispersed, both free of charge.

Beverly’s medium continually changes and is based on what she determines looks the best for each object, including pastels, watercolor, oil and sculpture. “Some of my paintings are social and philosophical having concern for world affairs and preservation of environment. My style ranges from representative paintings to the abstracts depending on subject matter.” Her current project, a small book with good friend and writer Ethel Bradford, follows a farming theme. Entitled “The Sunset of the Farmer,” it is a collection of historical sketches by Beverly and accompanying memories from Bradford. The two ladies agree that there is a decline in the interest of farming and the book is a reflection of a time period each remembers fondly. “To me the farmer is an aristocrat among men,” Beverly states.

A fixture in the art scene in Salt Lake City and well traveled nationwide and abroad, Beverly considers Utah a top rate state for artists. Unlike most people, a vacation for Beverly does not include a break from her work. She visits galleries, exhibits and makes a point to paint while on the road. On a recent trip to London she did not feel right until she got some painting in. She has witnessed the growth in the art world here in Salt Lake City during the last few years and strives to keep it growing by bringing back fresh ideas about what galleries are doing around the world and using what she can implement on her own. Any idea that increases awareness and expands one’s view on the subject always gets her attention. She misses the Sunday Salt Lake Tribune newspaper columns from professor and critic George Dibble who passed away a few years back. He was a voice in and about the local art community and in her view nothing has since replaced him.

Even though Beverly has exhibited statewide and has received numerous awards and accolades over the years she still strives for her big break. Asked what her favorite piece is, she responds with, “The one I haven’t done yet” and likens the journey to gambling. Artists are always looking for the jackpot. Being an artist equals constant turmoil over ”never knowing if you’ve made it as an artist.” This motivation keeps her working at her craft today. Those of us lucky enough to know Beverly and enjoy her talent have truly hit the jackpot. For her’s is a life rich in history and art.

Wheeler Farm honored Beverly’s legacy and ancestry by establishing The Beverly Wheeler Mastrim Art Gallery on the grounds in 2002. True to her roots, the gallery showcases both the works of local artists as well as works from the Salt Lake County Art Collection. The exhibits rotate several times a year and new artists are always welcome if space allows. The idea is simple — provide local artists a venue to showcase their work.