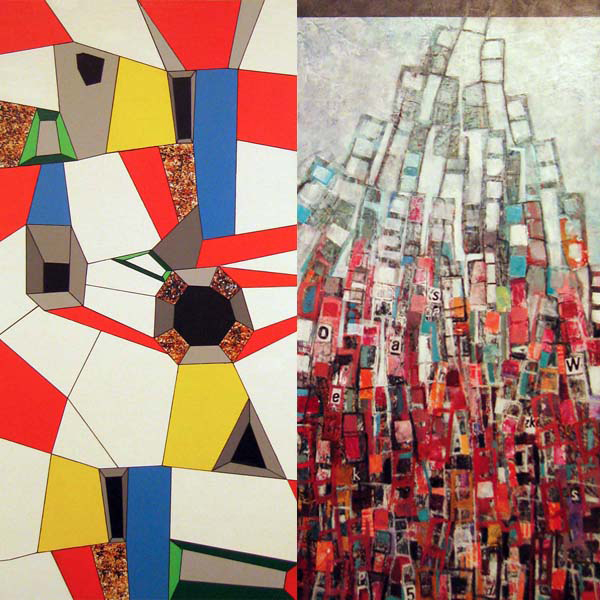 Father and daughter artists Linnie Brown and Marinus E. Wolf base their current show, Related, on the theme of crosswords. Their paired pieces illustrate questions and answers from the trivial puzzles, one artist exploring the answer as the other poses the clue. It all started from Linnie’s opinion of her father’s work being reminiscent of the lines and geometry of crossword puzzles. Overall the concept of the show involved a cross-state (Brown is in Utah, Wolf in Oregon) process and a surprise finish. Brown and Wolf hunted crossword prompts from varying newspapers in their areas until they came up with enough to begin painting, separately, and not viewing the other’s completed work until they met back up in Utah. They completed ten works over a nine-month period of back and forth communication and finished the rest of the show over the following year. Hung side by side, these linked pieces and artists produce an engaging show.

Seeing the paired works hung together reminds visitors of the puzzle forms themselves, as they actually meet to create one larger piece. Their placement is a strong visual translation of “32 Down” and demonstrates their strength in concept. The proximity also exposes their absolute stylistic differences.

Brown’s interest in fine art started in high school and she pursued these studies in higher education, a surprise to her father. Her current work builds with colors and images that result in balanced and bright compositions. Her art reads as an open minded, but controlled type of collage. Compared to her father, Brown is the kid that colored all over the crossword page Wolf precisely completed without even so much as an eraser mark. Wolf’s art is careful, mathematical and geometric. He began practicing art more dedicatedly after retiring from the tech industry. His straight lines and exact shapes are notable, and in fact a nice break for the eyes after searching their maximized counterparts. While Brown’s identity as the practicing artist is made more obvious by the direct contrast of hanging so close, Wolf’s sentiment opening night that, “I do what I want to do” is the unapologetic attitude of a true artist. Father and daughter work together is a celebration of tradition and family. 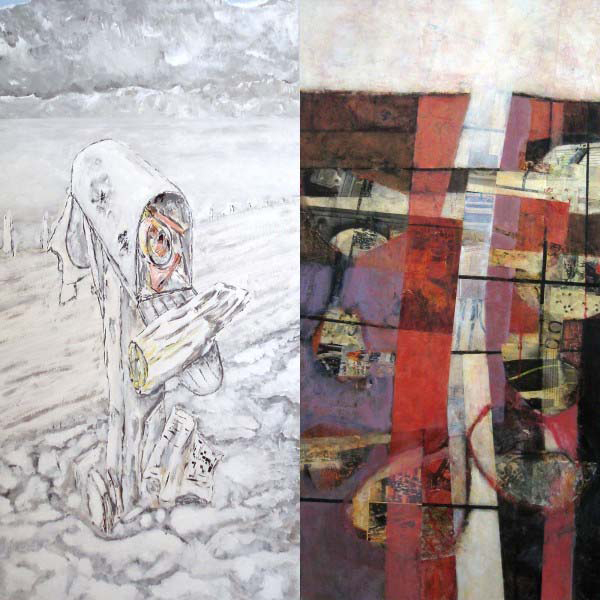 While the main premise of the show draws from Marinus’s geometric style, one of the stand out pieces abandons his characteristic methods. As the rigid lines are loosened a bit, the pieces work very well together in “Stashes” and “Stores.” Brown hides pieces of crosswords and letters that reveal themselves below purples and reds. “Stores’” letters and layers are pictured next to Wolf’s lone mailbox, which mimics the colors of its neighboring work. The images seem more involved with one another. “Stashes” and “Stores” is a charming surprise from their crossword process.

Several very different, but successful works fill the rest of the gallery. “Sail” and “Leave Port” is a special combination for the father daughter team because of their history with sailing. Brown was responsible for “Leave Port” and her fluid structure does a brilliant job of portraying the clue. Wolf owned many boats over the course of his lifetime, and “Sail” unmistakably pictures its namesake. A nautical blue carries throughout both.

“Leave Port” is to “Sail” as “Create a Whole New Set of Problems” is to “Pandora’s Box.” In this set, the remarkably similar shapes and related content are hard to believe. Such open-ended clues lead to such alike pieces. Brown’s climbing tower and Wolf’s use of the entire panel create one of the finest pieces in the show.

Related is a show to explore. Although we can’t expect that everyone will see the introductory text explaining the crossword concept, if at least a few titles are read, it is an easily recognizable theme. The work fits together well and the show is inventive, as each artist produced entirely different interpretations of related hints and clues. 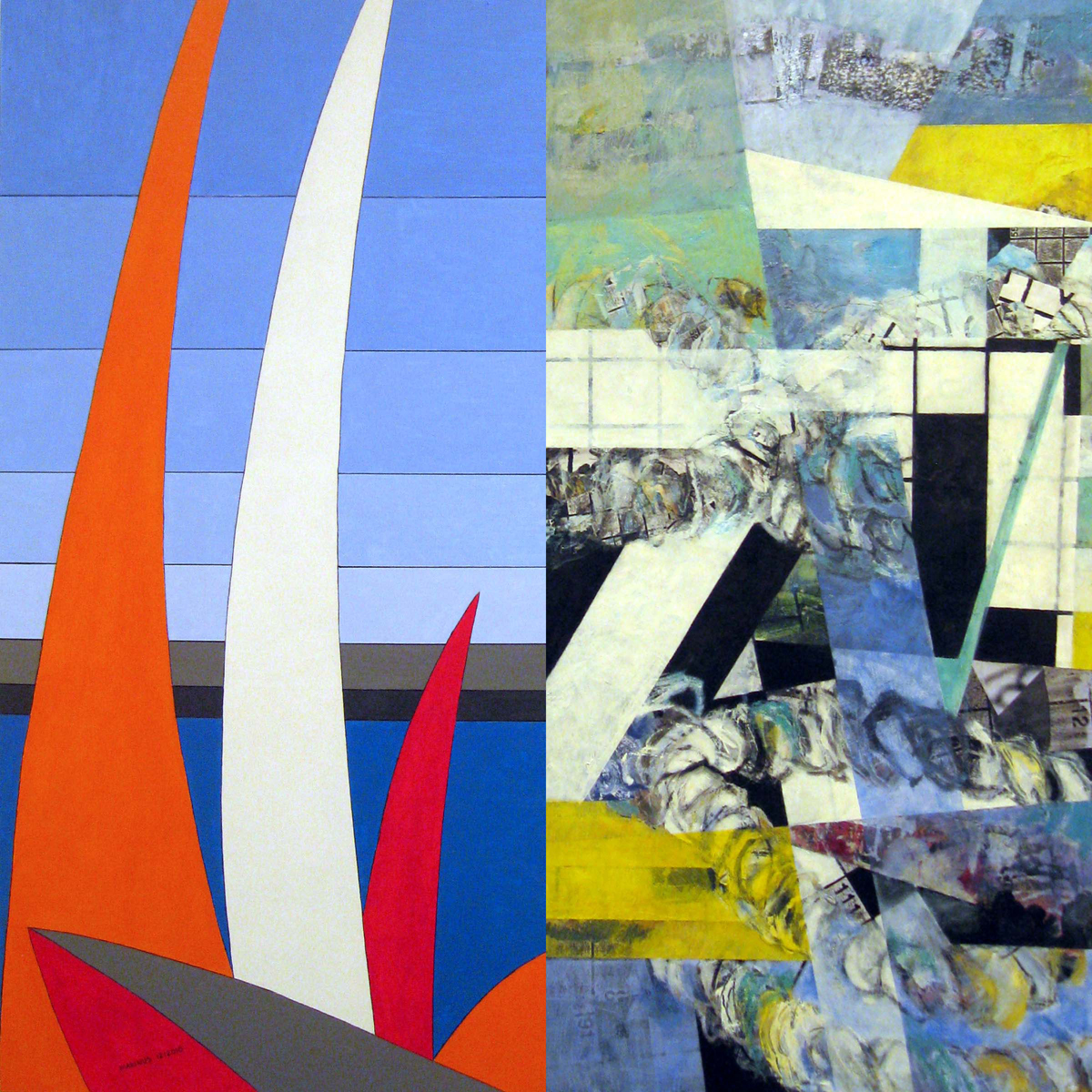 Related is on display at the Covey Center for the Arts in Provo through April 25th.