The Prospect of Spring: Cori Redstone at Charley Hafen Gallery 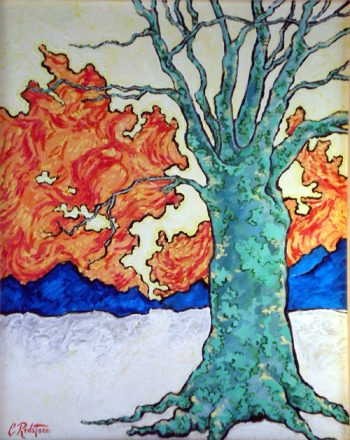 Modern transportation means hub-to-hub: the only choice for the traveler is what to do after she reaches her destination. Likewise most jobs: issues are discussed with a supervisor, but management makes the decisions. And then there are the lives of many women, whose close connections are all with or through men. Cori Redstone, like many women, realized only after a major life upheaval that she needed to approach other women directly: without supervision or chaperone. The results of her decision include this body of new work: figure studies of women that are also portraits of women whose life stories she has encountered. Or perhaps they would more accurately be described as portraits of women she is getting to know well, who happen to be naked.

Naked is the correct word, too: at least if we accept Kenneth Clark’s distinction that, while the nude in art is an idealized image of the undraped form, a specific image of a real person without clothing should be categorized as naked. Not that there is anything pandering or dubious here. The women are presented with respect and, more importantly, self-awareness: they collaborate in presenting themselves. Anyone familiar with the new style of candid self-exposure—captured by digital or phone camera by a friend, lover, or the woman herself—will see how those images, with their smirks, nervous grins, mockery of allure, or averted eyes dwell in a different ethos from these calm, centered images, where our eyes are privileged to eavesdrop on the connection between artist and model. 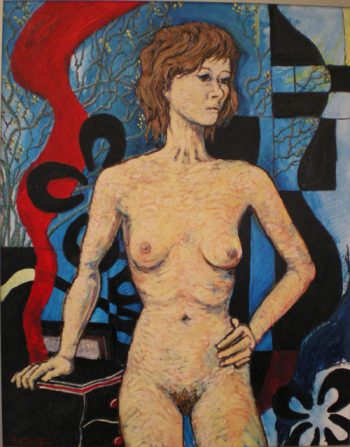 The wide-ranging English author and critic, John Berger, writes that Renoir’s nudes are never really naked, because they are clothed with paint. Redstone, who has made her own synthesis of the Post-Impressionists, does something similar in reverse. In “The Director,” she accomplishes something like Seurat, finding the structure not so much of the body as of the light we see it by: closer inspection reveals the seemingly-solid flesh to be a layered grid of brush marks. In “Red Irises,” |2| she recalls how van Gogh’s plane trees seem about to burst into flame in the sun’s heat; her flowers, with their creamy, confectionary paint, appear both solid and almost ready to melt, while the vertical pickets seeming to rise behind them express their desire for the sun. Next to “Red Irises,” “Woman in Lavender Chair” invokes Cezanne’s way of building forms with areas of color. “Pillar of Salt” |0|argues that Gauguin and van Gogh fell out not because their ideas were irreconcilable, but because they were so close. The generation that followed the Post-Impressionists—Picasso’s crowd—may have preferred Cezanne’s geometric way of building forms. Solid form is also a preoccupation of Redstone’s. But in her work we see why the public ended up voting not with Picasso, but with Gauguin and, above all, van Gogh. If we must break down the things we see, we’d sooner know our experiences as feelings than as ideas. 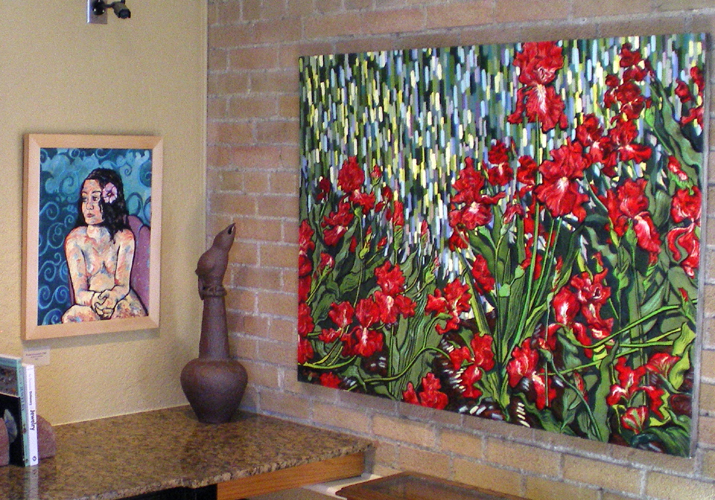