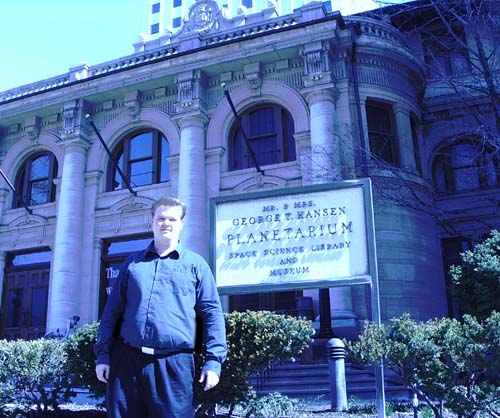 The Utah Arts Alliance would like to give Salt Lake City a full-blown arts center in the heart of downtown. But they may need your help.

The Utah Arts Alliance, a 501(c) 3 nonprofit organization, was formed in early 2003 by Derek Dyer, Angela Brown and Jason Stewart, all active members of their respective arts communities. Brown, a photographer, dancer, business owner, and community leader has taught photography classes locally and is owner/publisher of SLUG Mag, the oldest alternative paper in SLC. Stewart currently works for Ken Sanders Rare Books in the production and publicity of all his shows by local, regional and national artists. He is also on the board of Slam Utah. Dyer is well known to the local visual arts scene both as an artist and as an arts organizer. The three formed the Utah Arts Alliance with the principal goal of creating an art center in downtown Salt Lake City. And now they say they’ve found the perfect place for it — the building formerly known as the Hansen planetarium.

But, Dyer says, they will need your help to make it work.

Renovation of the building will costs millions of dollars, but what Dyer and his group are looking to the arts community for are a few letters. The historic building located at 15 South State is owned by the city, which has indicated that they want to see the building put to public use rather than sold into private hands.

In proposing their Utah Arts Center for the space, the Alliance says they will create a much-needed cultural outlet that will help revitalize the downtown area while remaining true to the historic purpose of the building. What has most recently been the Hansen Planetarium was originally built in 1905 as the city’s first public library, a position it filled until the 1960s. When the library became too large for the building, George Hansen underwrote the cost of transforming the facility into a planetarium. It remained as such until 2003 when the Clark Planetarium was opened in the Gateway project. The Utah Arts Alliance wants to continue the building’s role as an educational facility by creating an arts center devoted to classroom education, exhibition spaces and a performing arts theater.

Dyer says that the Alliance wants to use the building to create a “cultural classroom that has the spirit of an arts festival every day.” Their plan uses every square inch of the building for a variety of visual arts and performing arts activities. They plan to use the unique quality of the building — its planetarium — to create a performing arts space that would be available for theater, concerts, poetry readings, and a unique use of the dome — multimedia projection shows. In addition, classrooms, workspaces and a darkroom would be built to allow for instruction for children and adults. Credit and non-credit classes would be available from professional instructors, including professors from some of the area’s top educational facilities. The classes would run for 14-week sessions, one day a week for three hours. Classes offered might include computer design, photography, foundation art classes, and advanced art classes. In addition they would also provide performance classes.

Of particular interest to the visual arts community, the Alliance’s plan would also provide three exhibition areas on three different floors of the building. The building’s ground floor lobby area would be transformed into a 4,000-square-foot exhibition space for shows by local artists. The Alliance wants to use the other two floors of the planetarium to “expand [the public’s] horizons beyond Salt Lake and Utah.” The second floor would hold exhibitions by regional artists in its 1,700-square-foot area. Exhibitions by national and international artists are planned for the third level, which will have 2,400 square feet. Members of the Alliance’s advisory board often travel to various international art centers such as New York, Paris, and London, and could take the opportunity to bring the international art scene to Salt Lake City.

The Alliance plans not only to use every available square inch but also every available minute of the day. In keeping with the city’s plans to revitalize night life in downtown Salt Lake City, the Alliance wants to keep the center open late and provide programming well into the night. “During the day it’s a busy educational center,” Dyer says, “and at night it becomes a hotspot.” They will keep the gallery spaces open until 9 p.m. Monday through Saturday (which is hours after most galleries and museums have closed) and noon to 5 on Sundays. In addition they would offer a wide variety of performances in the theater for extremely reasonable prices.

The Alliance’s proposed art center would provide a number of positions for members of the art community, including gallery staff, theater staff, educational staff and facilities management. If all goes well, the Alliance hopes to open the Utah Arts Center in the fall of 2005, the 100th anniversary of the building‘s construction. They will be presenting the city with a plan for the use of the space and are encouraging all members of the community who would like to see this project become a reality to write letters of recommendation to the city to help it determine community support for the plan. To learn more about the proposed Utah Arts Center and to find out how you can help, visit the organization’s website at: www.utaharts.org.