In an undefined space, two men grapple. The one getting the worst of the struggle is naked to the waist and receives a vicious-looking poke in the eye from the other man’s thumb. The apparent aggressor is wearing a plain white robe, with his sleeves rolled up, and the hand not assaulting his companion is cupped to hold a muddy-looking substance that he is rubbing in the first man’s eye. This is Brian Kershisnik’s vision of Christ healing the blind man. While he acknowledges the “facts” of the scriptural narrative, he grounds his version in the more immediate facts of corporeal life. Ministry is work; roll up your sleeves and see to it. Being healed takes away our comfortable security and forces us to cease accepting charity and begin carrying our own burdens. As Jefferson wrote in the Declaration of Independence, “mankind are more disposed to suffer, while evils are sufferable than to right themselves by abolishing the forms to which they are accustomed.” The savior may be a hero in the story, but he’s less likely to be welcome in the real world.

Based on the evidence gleaned from 140 paintings, sculptures, and harder-to-categorize works filling five galleries at the Springville Museum of Art, Kershisnik is not alone in his taste for metaphors anchored on this side of the veil. Some artists do attempt to envision things none of us have seen, like the afterlife, or extraordinary events purported to have happened in another time and place, but emotionally evocative rearrangements of the life we witness every day thread among them, improving the chance there will be something here for almost any taste. 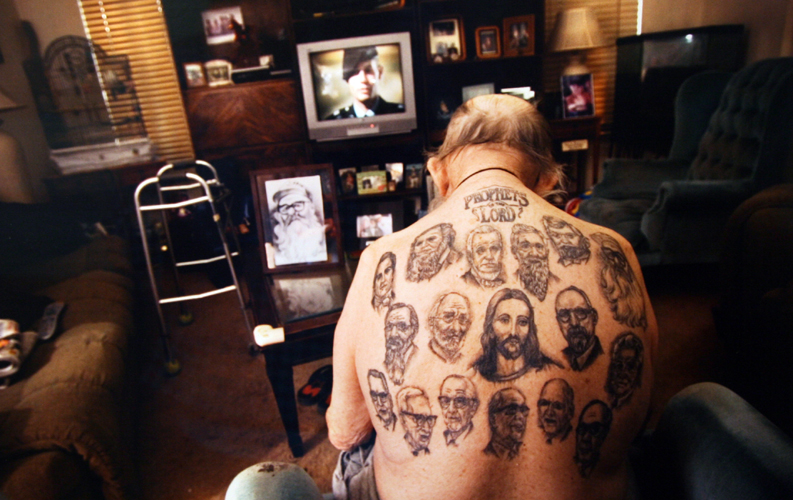 It is a measure of how sacred something is that one person will paint its picture, and someone else will pay to hang that image on a wall where it can be seen. Static images of LDS temples abound in Utah homes, alongside opaque images of Joseph Smith and officials of the church he founded, and both are in evidence at Springville’s Annual Spiritual and Religious Show. The principle of religious freedom is often interpreted to mean we may not comment on what others revere, but venerating an institution must be one of the more literal-minded shapes the spiritual impulse can be blunted into. “One-eyed Jack Armstrong,” Keith Johnson’s photograph of a man’s body tattooed with portraits of the prophets, marks one extreme. On the other, Faye Truman’s monochromatic drawing of an instantly recognizable hand gripping a cane for support shows neither the Prophet’s temporal authority nor the gratitude of the sheep for their shepherd. Instead, it connects to an outpouring of feeling for someone at the pinnacle of achievement who has managed to retain the common touch. 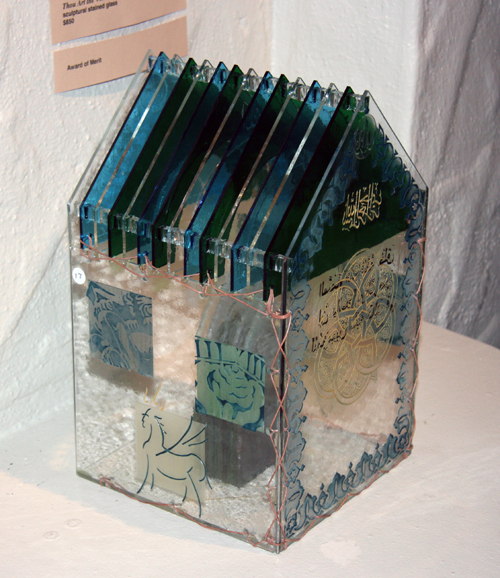 Unusual materials and points of view are here as well. Andrew Kosorok’s “Thou Art the Voice of the Lord and His Trumpet” is a house of glass, its crystalline walls intricately carved with sacred symbols. Tom Taylor’s panoramic photo presents the Salt Lake Tabernacle like a scroll unrolled, as if one could stand in the center and see in all directions at once. Speaking of scrolls, the traditional religious text written on parchment achieves a kind of apotheosis in “Four Thousand Years,” Richard H. Passey’s bravura display of leather crafting. Apparently a kind of pop-up scroll covered with vignettes from the Book of Mormon, its carved and dyed surface recalls the painted friezes of Classical architecture, while the double-walled, fret-worked montages that arise on either side of the central Mayan calendar present the Central and North American versions of Pre-Columbian Christian life. 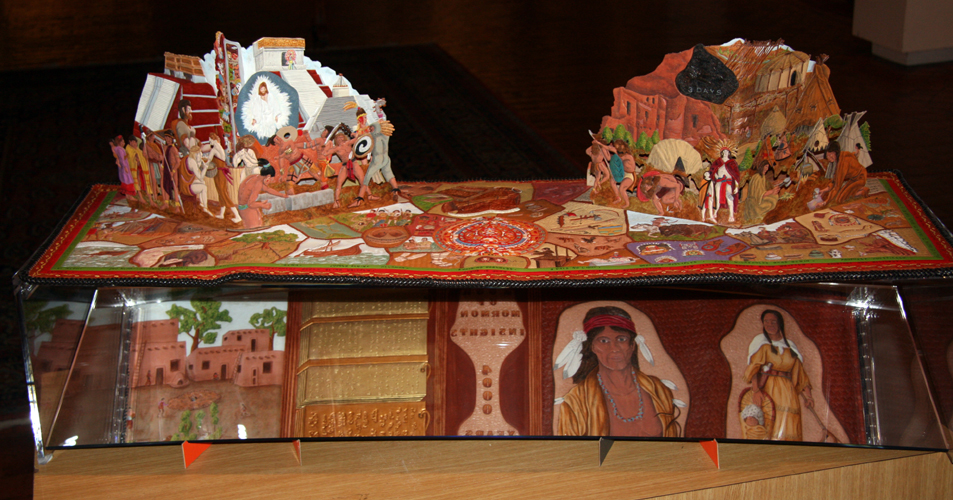 A more challenging perspective characterizes the sculptures Frank McEntire makes from a combination of recycled and original materials. “U-Turn Eucharist” began as an antique vending machine that allowed the customer to select from eight different rotating gumball-type dispensers. Here the upper four contain only wafers of unleavened bread, but the lower four contain plastic charms—statuettes of saints and symbols of disparate faiths—jumbled together with large caliber bullets. Mounted atop the machine is a spire on which an angel sits. His pose recalls Rodin’s “Thinker,” but the little fellow’s sagging, weary posture underscores how all is not well in the Lord’s house. McEntire’s other assemblage, “The Golden Wing of the Winged Temple,” is also ambivalent, suggesting both the pinnacles of Gothic churches and elaborate Victorian birdcages that mimic human habitations. Behind bars, the outsized gold figure of the wingless angel Moroni blows his horn atop a Salt Lake Temple that has grown wings: a visual metaphor of immaterial power and temporal restraint. 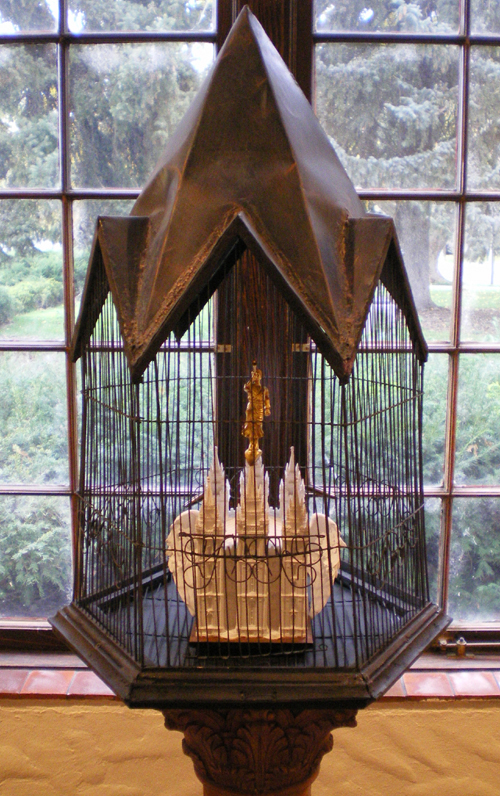 “The Golden Wing of the Winged Temple” by Frank McEntire

Other works are less refreshingly kitsch-free. Sometimes it goes with the territory, since historical representations can hardly avoid calling up Hollywood epics and fin-de-siècle ornamental chotchkis. Still, the realism inherent in the meticulously rendered but ultimately imaginary costume of a warrior or a siren is categorically different from the charming sentimentality of Rebecca Lee Peery’s “At All Times and in All Places,” in which two anonymous missionaries, their cuffs rolled up above bare feet, wade through a flood in a third-world town, or Marilyn Z. Nielson’s “Feed My Sheep,” depicting children preaching to some tolerant sheep, or Jean J. Clay’s “Mary, Joseph, and the Child Jesus” rendered in the ultimate democratic medium: papier–mâché.|5| The generosity and humor in such works lifts them above their sectarian references, just as the inclusion of various Native American images—and one of Krishna—deliver on the Museum’s promise to include “sincere and empathic reflections” of faith regardless of “artistic form or religious/spiritual belief.” 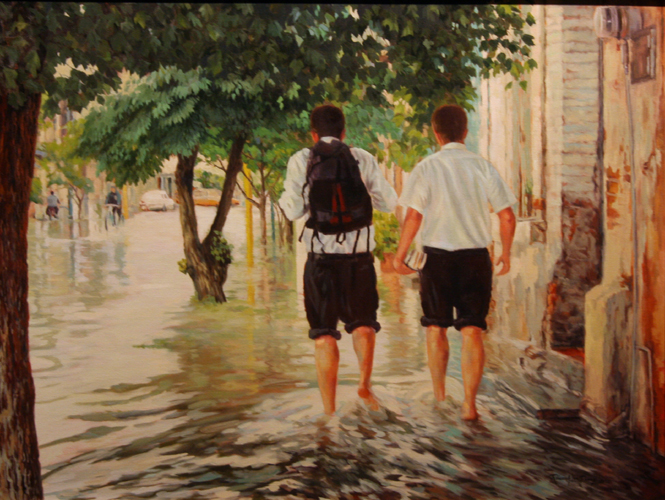 “At All Times and in All Places” by Rebecca Lee Peery

As an aside, there is one “artistic form”—present here only marginally—that is just as well excluded. As a student of human nature and history, I find recriminatory images of past atrocities, whether perpetrated in Serbia during the middle ages or in Missouri in the 1830s, about as helpful as throwing gasoline on a neighbor’s burning barn. If a crucified savior could return eighteen hundred years later to offer everyone a second chance, that—and not cleaving to an old injury—should be taken as a model for our own conduct. 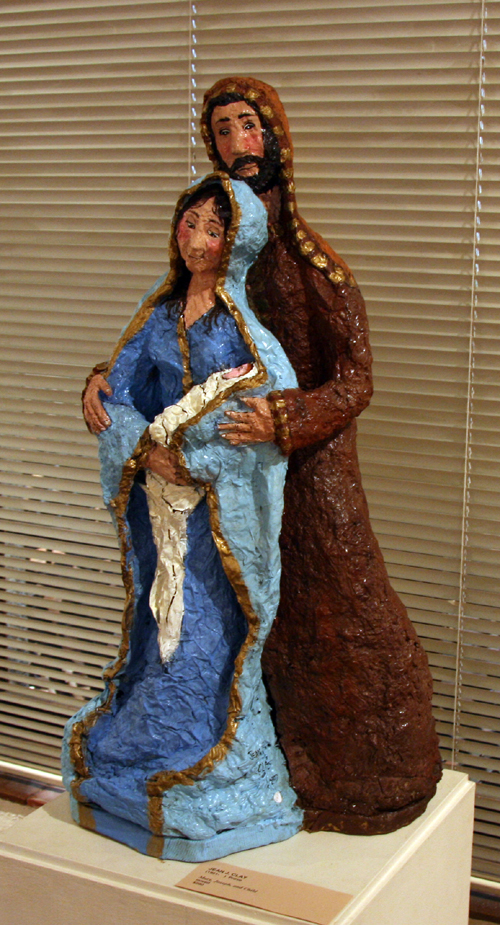 “Mary, Joseph and the Child Jesus” by Jean J. Clay 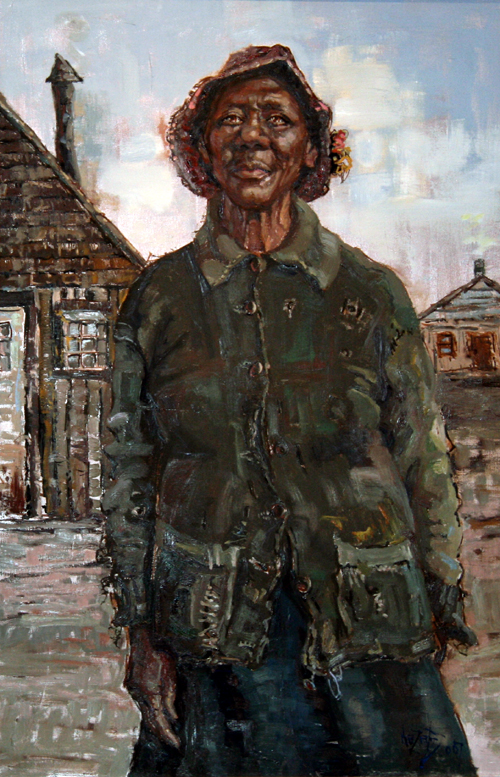 “Stand with Integrity” by Kaziah Hancock

Kaziah Hancock presents another challenging model for consideration in “Stand With Integrity.” Hancock, herself an exemplar of integrity and a painter of superb if unfashionable technique, depicts a poor woman, none of whose material circumstances will be envied by anyone who sees her, yet whose robust joy challenges such superficial judgments. Here we encounter, without the distractions of dogma or narrative, the aesthetic principle that links religion to art as naturally as science connects to technology. Other examples of revelation found in close observation of the physical world include both of Chris Young’s incandescent realist canvases: Emblems consecrates bread and water by making us see them as if for the first time, while the crackeleur that covers the face of Christ captures the aging of icons, invoking the centuries of veneration that surround its subject. In Herman Dutoit’s photorealistic “Consider the Lilies,” one of the largest charcoal drawings I’ve ever seen, the eye penetrates the material realm in a visual parable that illuminates a sacred use of the flesh. And Deborah Teare’s “Testimony” likewise argues that seeing requires disciplined looking, and that contemplation is a form of prayer. Her trompe l’oeil shelves also hold a lily, in addition to the Book of Mormon, images of Joseph Smith and Jesus Christ, bread, water, and a snapshot of the Manti Temple. In its illusion of peeling paint and real objects it evokes the kind of painting that was in vogue around the time and locale of early LDS history, but like those didactic works it also contains an ironic warning: Look closely, but don’t be fooled. 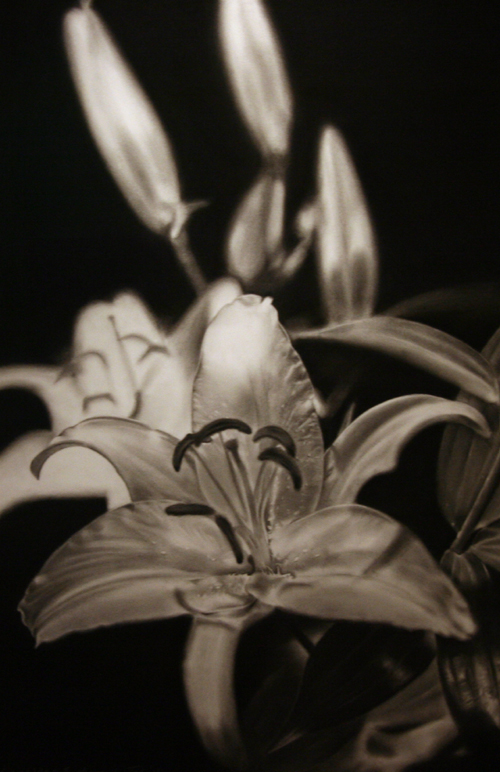 “Consider the Lilies” by Herman DuToit 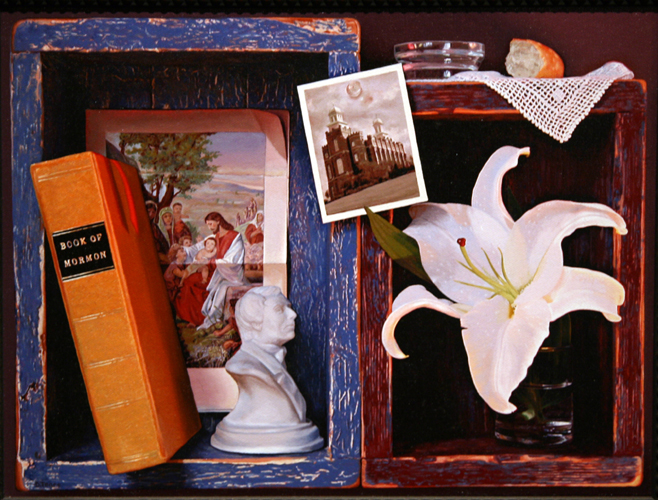 I can’t overlook what may be the most courageous artists in the exhibit. Abstraction is a minority taste and, despite its evident ease in capturing emotional and spiritual states, is particularly unpopular for depicting what is often conservative subject matter. Spencer Budd’s “John 1:15” consists of a white bar cutting through a stormy purple field like a waterfall plunging into Armageddon, the entire surface scratched into and scribbled on with crayoned text. J.M. Hutchinson’s “Genesis” (“…we are all the work of Thy hand.” Isaiah 64:8) composes a mandala from a crouching, rising figure and concentric lines that suggest organic or crystalline forms. Both represent attempts to find a paradoxically more direct route to underlying reality than an accessible, but ultimately misleading illustration of a Bible story. Such illustrations, meanwhile, are the subject of a critique by Scott Allred, who projects himself into a meticulously crafted meditation on Daniel in the lions’ den, and Tom Black, whose study of what may be the wrapping paper from the crucifixion involves some of the most remarkable illusionistic painting I’ve ever seen, used to present concepts rather than real things. But for the evolution of half a millennium of art history, any of these would be right at home among those medieval artists whose sacred art was their highest form of worship and praise. 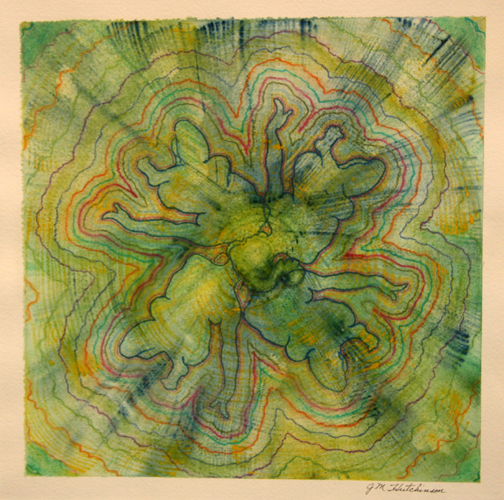 The 22nd Annual Spiritual and Religious Show continues at the Springville Museum of Art through December 27.