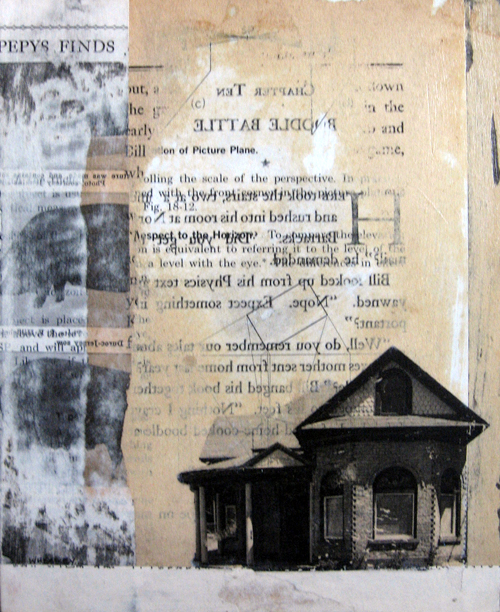 In most cases, traveling is a process of getting from point A to point B. The mind is elsewhere while the landscape is passed by unnoticed. Eight artists bore this in mind as they explored the Utah landscape while traveling US Highway 89 from the Idaho border in the north to the Arizona border in the south. The State Street Project: A Portrait of Utah, now on view at Art Access Gallery and later traveling across the state, showcases each artist’s unique response to this historic stretch of highway. The artists have done what defines an artist and lends itself to great art. They used their individual perception and looked. They sought to notice and appreciate what others do not and the results on display are bold representations of the landscape of Highway 89, unique interpretations of the land for the land’s sake and the road not purely as a means to an end.

Rural America is largely being forgotten as people move to cities. Small farms and rural communities, the backbone and sustenance of this country, the type strung together along US 89, are largely ignored as people speed along interstates from one metropolis to the next. The real value of rural America, its significance to the lives of Americans and the world in its productivity, is not lost to Justin Wheatley, whose paintings are a testimonial to the value and loss of rural America. Wheatley’s works, in their highly structured and geometric, minimalist interpretation, are not quite landscapes. “Fairview,” where the small scale farmhouse is rendered in slight proportion to the space it occupies, is a well-balanced composition- not formally but ideologically. Wheatley’s series of similar works imply the vastness of the rural landscape, what might be called its emptiness; yet Wheatley quantifies the value that the occupation in this emptiness signifies. It is a balance between space and habitation which venerates rural America.

Along deserted portions of Route 89, one finds monuments to what was: an old gas station long gone to ruin, a derelict windmill, billboards that have long since ceased to advertise anything — signposts of America’s past. These icons of nostalgia belong in a museum. Namon Bills has come close to capturing the nostalgia of America permanently in his vibrant paintings — icons and collages of the past mingled with the present. In “Classic,” he brilliantly conjoins what is seemingly an old advertisement reading “Utah” with a shiny new Mini-Cooper. He brings fragments of the state’s past and present together in what are also fragments of his own journey. 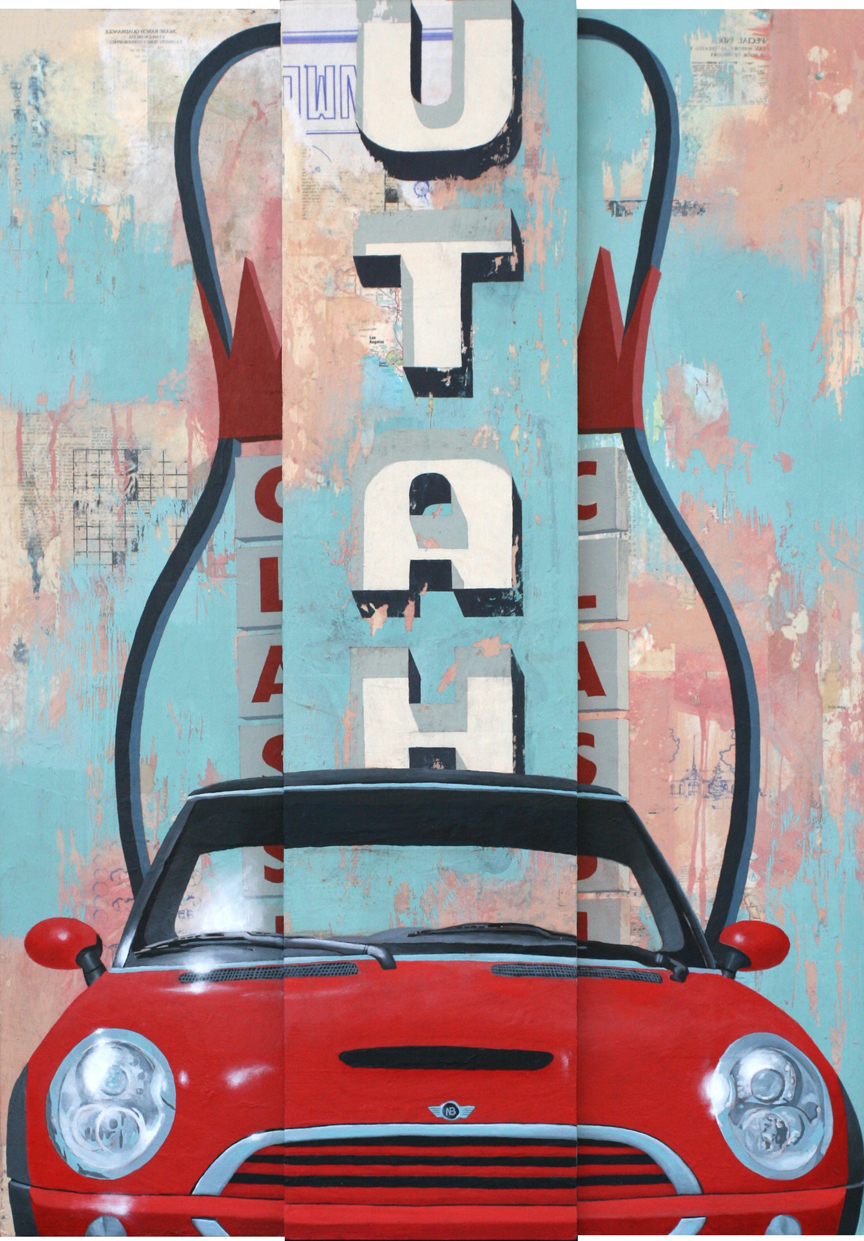 On a lengthy journey, one discovers physical icons of the land, but equally dominant is the state of mind as the traveler traverses these endless highways. Elizabeth Wilson, in her near completely abstract paintings like “Eater,” references the subjective state of the traveler devouring the road. Rather than the land itself, Wilson’s abstractions portray the subjectivity of her experience.

Before, during and after a significant journey one’s psychological state of being shifts. It is said that traveling is a life-altering event; it opens the mind, creates new realms of subjectivity and expands personal horizons. Steven Stradley’s “Psychological Landscape” is just that, his psychological journey as he traveled Route 89. The piece, monumental in scale, is crafted by placing in a small, individual rectangular canvases in a grid — time capsules of his mind and psychological perceptions of his journey. They form a rectangular totality comparable to the totality of the artist’s psychological impressions.

The postcard and snapshot are synonymous with travel. They serve as concrete reminders of the journey, capturing nuances that might be forgotten without them. Steve Hardman’s contribution to the State Street Project is a series of lucid photographs, a documentary essay of landscapes he experienced on his travels. His “Provo Tabernacle” is a particularly significant monument that no one acquainted with downtown Provo could mistake. This close look at the landscape and the monuments of Utah which create it lends Hardman’s work his subjective experience and captures it objectively in its tangible reality that all might relate to.

A more poetic journey, such as the travels of Hemingway or Kerouac, is almost unavoidable during the long hours on the highway. Seeing the land while experiencing it can create a transcendental relationship which reaches far into the horizon, beyond the highway, beyond the hotels, the towns. In painting and written poetry, Shawn Dallas Stradley revisits his experience of the journey in a relationship combining collage and poetry which flow into a homogenous whole. His abstract collages are as poignant in meaning and metaphor as his abstract poetry. His experience is registered in this sequence of works which denote an imaginative and compelling experience of the adventure down Route 89. Poetry can also be an aspect of something very sobering. A poignant feature of the highway across America is the destruction of the landscape by the artificial — be it a restaurant, a shopping mall, or, in Steph Johnson’s work, a dam, which completely reinvents what was natural for human benefit. Johnson’s work might be called poetic by her method. She conveys the artificial in simply rendered pen and ink; however, in her canvases it is apparent that these human-made constructs are not to replace the beauty of the land, which is displayed in an abstract bouquet of color and vibrancy.

As nature finds its way being hindered by the artificial, it is a highlight of the show and a highlight of any journey to explore and appreciate the untamed beauty of the land: mountains, rivers, valleys, trees. The artists of the State Street Project do not neglect this integral aspect of the land. Like Johnson and others, Sarah Bigelow has contributed her experience of the beauty of nature in her series of abstract works focusing on nature, such as is seen in “Tree # 1.” Painterly abstraction of nature is a good approach to capturing the vicissitudes of the natural world. Literal painting can limit the extent to which the natural may be received by the viewer in its finitude. Focusing on the essence of the pure elements of the natural, Bigelow renders her subject in a manner which is not dissimilar from Cézanne; she brings her subject frontally in a web of natural elements with no apparent trace of depth. She focuses on what is present — the abundance of the natural world.

When the viewer visits the State Street Project, he or she begins a journey through eight unique vantage points of the same journey of experience. In doing so, they will come to know what Namon Bills, curator of the exhibit, said of the experience: “We discovered a new way of seeing; we traveled the state, a new experience. You were not trying to get to a new destination, but traveling to experience the road itself.”