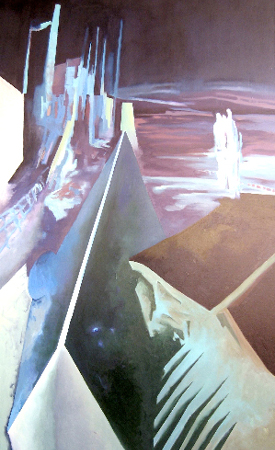 When we hear of the subject of landscape in art, most of us tend to visualize the beauty of nature or a simple sunset over rolling hills. This isn’t the case in the work of Lenka Konopasek or Charles E. Uibel, two artists exhibiting their work at Salt Lake’s Finch Lane Gallery through May 30th. Konopasek, a painter, and Uibel, a photographer, explore beyond the traditional interpretations of landscape and present the elements of casualty and human presence in their work.

Lenka Konopasek’s interpretation of landscape shows the devastation that natural disaster can have on all things material. She juxtaposes pieces of the organic with the man-made in order to bring us into these devastating situations. Working from media photographs that have been computer manipulated, Konopasek draws on the elements of composition and theme in her large oil paintings. Her style is effective when she is loose with the organic subjects of destruction. While the majority of her works are successful, a few pieces fail closer inspection and unfortunately detract from the exhibit as a whole.

Konopasek’s paintings struggle with the geometry of lines in shape (inherent in architectural landscape) and the organic forms of natural disasters. For example, in “Landslide 2,” we see the massive devastation of destroyed buildings in deep tones against a distant horizon. Unfortunately, we can’t see beyond the diagonal lines drawing the eye into the frame from the lower left quarter. The geometry of these distracting architectural elements fills over 2/3rds of the foreground, causing us to wonder if these forms were, in fact, executed with the use of a stencil. This type of application contrasts with the stronger qualities of the other paintings. 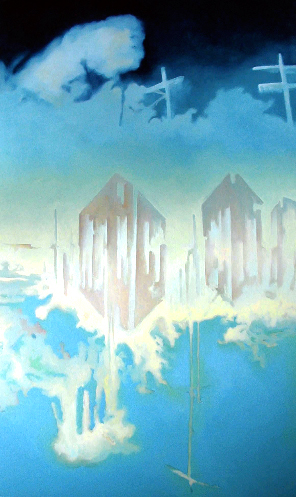 An unhappy result of this is the speed that the viewer moves through the painting. The angular elements result in a fast pace of viewing; our eye is traveling so fast that we can’t see the painting as a whole, cohesive piece. The viewer is either totally entrapped by a section of the work or too speedily led out of the work, leaving no time for contemplation of the subject matter. This was not the artist’s intention as evidenced in her statement and her other work. We feel the same weak compositional dynamics in other works; especially in “Landslide” but also “Landslide 3,” “Flood Reflection” and “Aftermath.”

Though it is visually appealing, “Flood Reflection” is so brightly painted with an abundance of hues in blues, greens and yellows, one can scarcely relate it to this series as far as color palette is concerned. At mid frame we see, perhaps stenciled, two ethereal buildings suspended in mid air below and above a mass of clouds. We are overwhelmingly surrounded by light, like we are floating in heaven’s waiting room, almost hearing a chorus of cherubim as we expect a pearly gatekeeper to be jetted into the scene on a cloud. In color, composition and form, Konopasek was influenced by a number of surrealist images and stenciled pop art forms. This results in an image and color palette that is set apart from the series.

In the end these composition and color problems hurt the series because they conflict with the artist’s intent. We cannot be convinced of disaster when we are transported to heaven. We can’t notice the elements of destruction because we are trapped in a pinball machine of geometric vectors, served to us as trite pop stencils. Because of these examples, I would have to venture a guess that the artist is starting a new series, or these are older works, or a failed experiment. 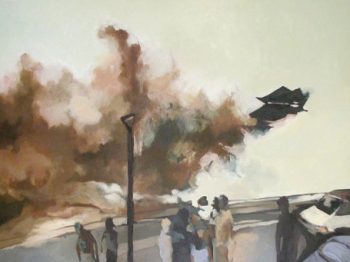 Unfortunately, we are so taken aback by these few paintings that we miss how effectively the other pieces in the series are achieved. For example, “Tsunami 2” contains many compositional elements similar to “Landslide 2.” Here we see a tsunami crashing into geometric shapes, a pagoda, a highway and a crowd of onlookers. Konopasek uses the same linear vectors leading us into the piece, such as the light pole in the lower left side of the frame, but this time she helps us into the scene whereas in “Landslide 2” she pulled us out of the scene with just the same attempt of use of line.

This time Konopasek’s painting doesn’t overwhelm or trap us because organic and geometric, linear and loose are balanced. We see the tsunami as the strength it was meant to be and the weakness of architectural structures. Our eye is set to rest, to contemplate the painting as a whole; we are not speeding through it, but see the tsunami and feel the disaster and its horror. 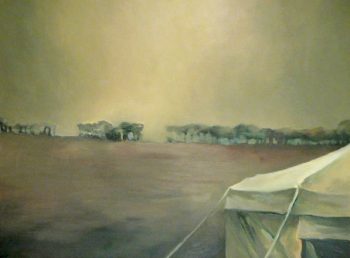 What we see in “Sand Cloud Army Installation 1” is a muddied effect of color in a dust storm in the sky about to engulf the forms on the horizon and the geometry of the tent in the lower right foreground. Konopasek uses these colors in a way that evokes the presence of the tumultuous movements of a natural disaster. This is necessary for us to read the situation correctly. Instead of a surreal, heavenly presence attempted with the brighter color palette, we are more convinced that this is a real situation. We can feel the heaviness of the impending disaster of the dust storm by her effective use of these muddied colors.

In “Sand Cloud Army Installation 1,” Konopasek steers away from the use of the simplified forms used in the buildings in “Flood reflection” and instead paints the more realistic form of a tent. This realistic quality is much more engaging because instead of an unstable look of flat lines and color, we are taken by how the tent’s geometry is responding to the dust storm. We see the reflection of the light of the dust storm on this object and, therefore, we can feel the effects it may have on the viewer and the rest of the landscape.

While Konopasek’s work shows the devastation that natural disasters can have on all things man-made, Charles E. Uibel’s photographs reveal the intrusion of man on the landscape. He sets out to find something new and unspoiled but more often finds evidence of human presence in these pristine landscape photographs. Whether it is his own footsteps in the sand of the flats or a road in the distance, Uibel does nothing to hide these hints of our mortality, suffering by the salty effects of the salt lake. This is truly a signature of his work and should not be dismissed or overlooked a just a pure coincidence of placement. 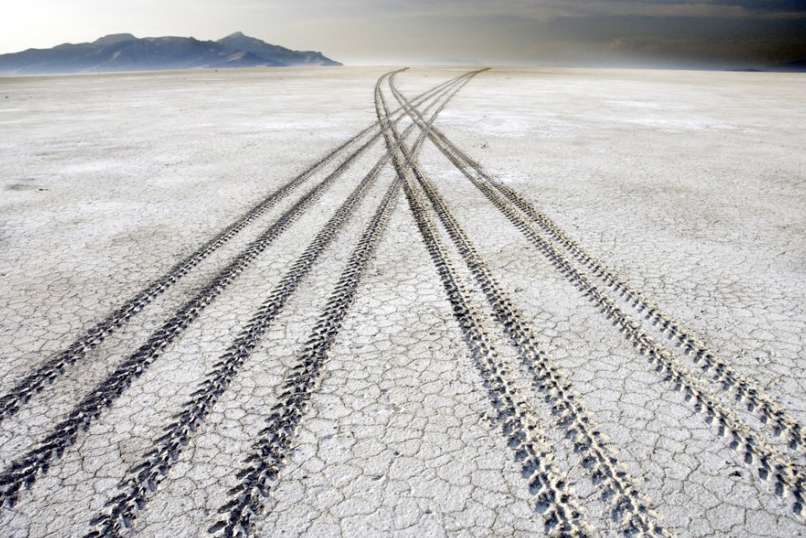 “Around the World” by Charles E. Uibel

Uibel’s photographs are executed with the whole arsenal of recent digital phenomena. He manipulates his prints with an over saturation of color revealing vivid oranges, blues and contrast of stark whites and blacks. He doesn’t do this sparingly but he does use this with great efficiency. We are initially drawn into the frame by these unnatural colors.

Once we are in the frame, we can easily identify that this is not just another landscape. For example, in “The Plans We Make,” at a distance you see a brilliant blue sky with an equally shocking blue reflection. The closer you get to the print the clearer you see the spiraling footprints made in the sand. A hint of evidence in the once unfettered landscape.

The same is true in “Around the World.” At first we see the typical gleaming white cracked salty ground, and then, like a shock, we realize that these automobile tracks shouldn’t be here, and certainly not crossing 3/4 in the middle of the frame. Yet, it does nothing to hinder the merits of the photograph.

Uibel’s textural elements are tempting because he uses a beautifully thick paper to print many of his works including “Clear Days,” “Long Distance Runners,” and “The Plans We Make.” The paper adds a dimensionality to his work that would otherwise not exist. This dimensional quality especially works in “Asteroids.” We can see the reflection of the mountain as it is seemingly floating in space because of the similar paper quality in both the natural sky and its reflection. In a far off area where there is much contrast there seems to be a dwelling area at the base of the sloping “asteroid.” This recalls the theme of a cultural remnant, but more importantly, it is a place for the eye to rest while absorbing the immensity of the whole “universe” this asteroid is reflecting in. 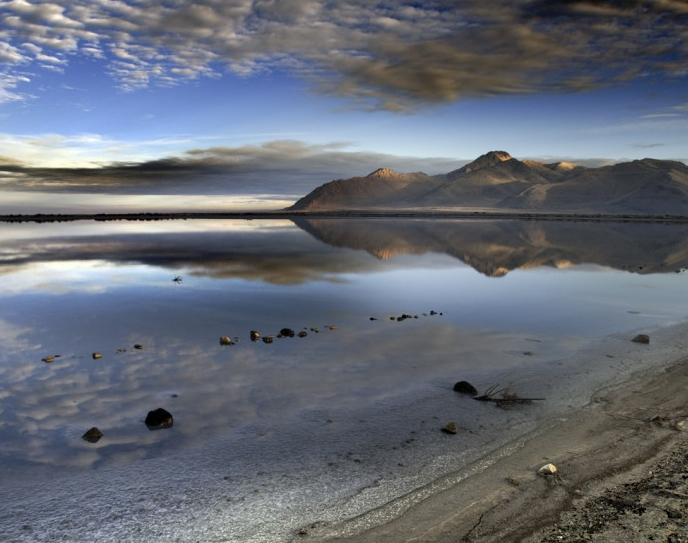 What we can take from Charles E. Uibel’s photographs is that he has an original aesthetic we should regard with respect to his technical knowledge. His use of digital media is a trademark of his unique style. He takes the subject of the landscape and presents it to us in a way uncommon to most landscape photographer.