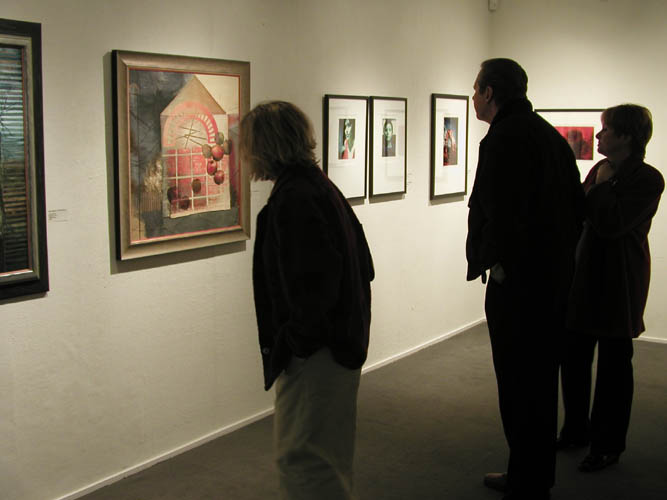 Little Utah vocabulary lesson:
To describe art you have three choices: art is either realistic, impressionistic, or abstract.
So, if it doesn’t look like a photograph, and is not a little-landscape-with-pretty- brush strokes, then it must be abstract.
At least that’s what I gather from Bountiful Davis Art Center’s exhibition The Nature of Abstraction.

When I first saw the title for this show, I couldn’t help but think of the exhibition the reality of abstraction, which appeared in a number of museums and art centers across the state in 1996-97. That show featured a large selection of works by varying artists all in an abstract — “nonobjective” or “nonrepresentational” — style. The works were great, the artists varied. But though I enjoyed the show, I feared a rerun performance at the BDAC.

Hindsight: A rerun would have been welcome.

With the talks on abstract art the center has planned for the next month, I get the feeling that this exhibit was an attempt to reach out to the public and explain abstract art. Show how open and sophisticated we can be.   Rather than demonstrating Utah’s openness, this show only proves our provincialism. 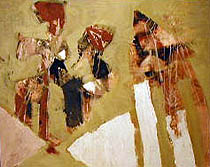 At best, only half the work could be called abstract. To educate the public and to exhibit challenging work is noble, but to present art in such loose, undefined terms, only does harm. Better not to know what abstract art is than to be convinced it is something that it is not.

It’s not so much the works presented in the show that bug me as it is how they were presented. The message you get is that if a piece does not resemble a photograph it can   considered abstract. That abstract art is simply   about being nonrealistic, not nonrepresentational. So, most of the art movements of the 20th-century are all lumped into this one generic category — abstract. It’s like saying that in music there is classical music and there is pop. No need to differentiate between Mozart and Wagner or Mariah Carey and Robert Johnson.

Some of the works had appeal and showed promise. For example, Linnie L. Brown, a young painter who exhibits at the center for the first time, presented some warm abstract works, filled with scrapings, imprints and camouflage maskings.

Collage was strong in many of the works. Martin Blundell’s works used series of drawings placed together. Unfortunately, the drawings themselves weren’t terribly interesting and putting them together didn’t improve things. Joanne Smith, however, used collage in a more adept manner. Smith stitches together fabrics to create her canvas where she creates images that join the visual and textual worlds. These works have a definite appeal. Smith has abstracted some elements of the visual world to use in her collages, but these works are closer to Picasso than they are to Kandinsky or Pollock.

Other works, though they had their own appeal, could only in the vaguest of worlds be called abstract. The flowers of Elizabeth Matthews (also showing at the Atrium Gallery in SLC) were stylized but definitely not what we mean when we say “abstract.” Landscapes of redrock country by Susan Plouzek were by no means abstract.

Her pigments were straight from the tube, but bright colors do not an abstract work make. The small watercolors of Andrea Jackman Rosborough, delicately and minutely done, featured insects on an architectural backdrop. They had a definite charm, but abstract? C’mon.

Trent Alvey and Stephanie Saint-Thomas both produced what we recognize as “abstract” art.   These works are “abstract” in the sense of being non-referential not simply nonrealistic. But the structure of the show was so flimsy that even an abstract artist like Alvey slipped in a couple of nudes.

Stephanie Saint-Thomas’ works are definitely something to look at. With their smooth epoxy finish they stand out, but I’m not convinced that she has successfully left her jewelry-making days behind to create credible two- dimensional images.

Pinpointing who is to blame for the mess is difficult. The art center has decided to create thematic shows for this year’s schedule.   A call-for-entries was issued for the present exhibit.

So, was the center simply at a loss once they had announced the show and didn’t receive enough responses?
Hard to believe. There are plenty of fine truly abstract artists in the state who could have been represented.

Overall, I can’t help but think that the real fault is a lazy arts world. Artists, professionals, and collectors included.   We spend plenty of time developing our lousy artist statements but how many art students get any real training in art history? or theory? or criticism?

Speaking of which, where are the critics out there? I can’t remember the last time I read a real review — not just advertiser’s propaganda — on the visual arts in one of the major papers.

We simply are not collectively exercising our critical muscles. We don’t care. So what happens? We decide to finally “say something” and we don’t know what words we’re using. With our flimsy vocabulary are we talking down to the public or do we really not see the difference ourselves?

I can’t help but think of the adage — better to keep your mouth shut and let people believe you’re an idiot than to open your mouth and confirm it.